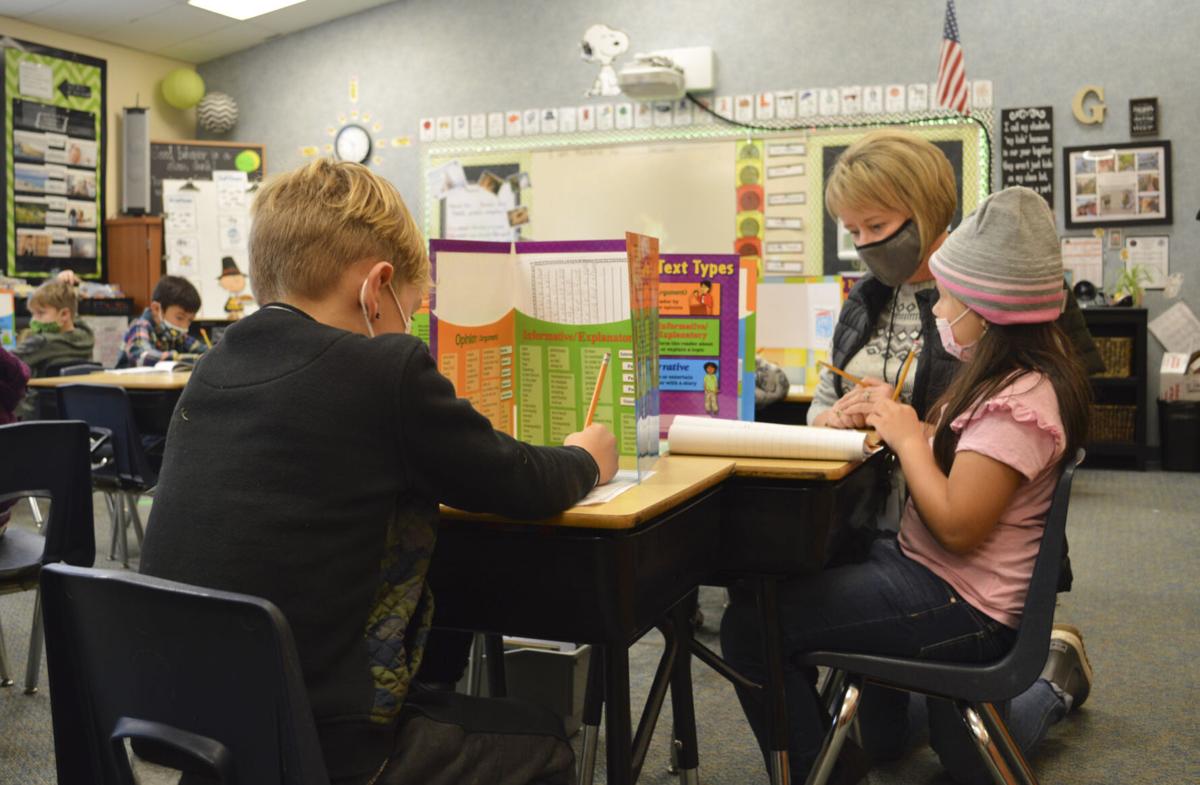 Gail Gregory works with a student in her second-grade class at Hilton Elementary School in Zillah, Wash., on Friday, Nov. 19, 2021. 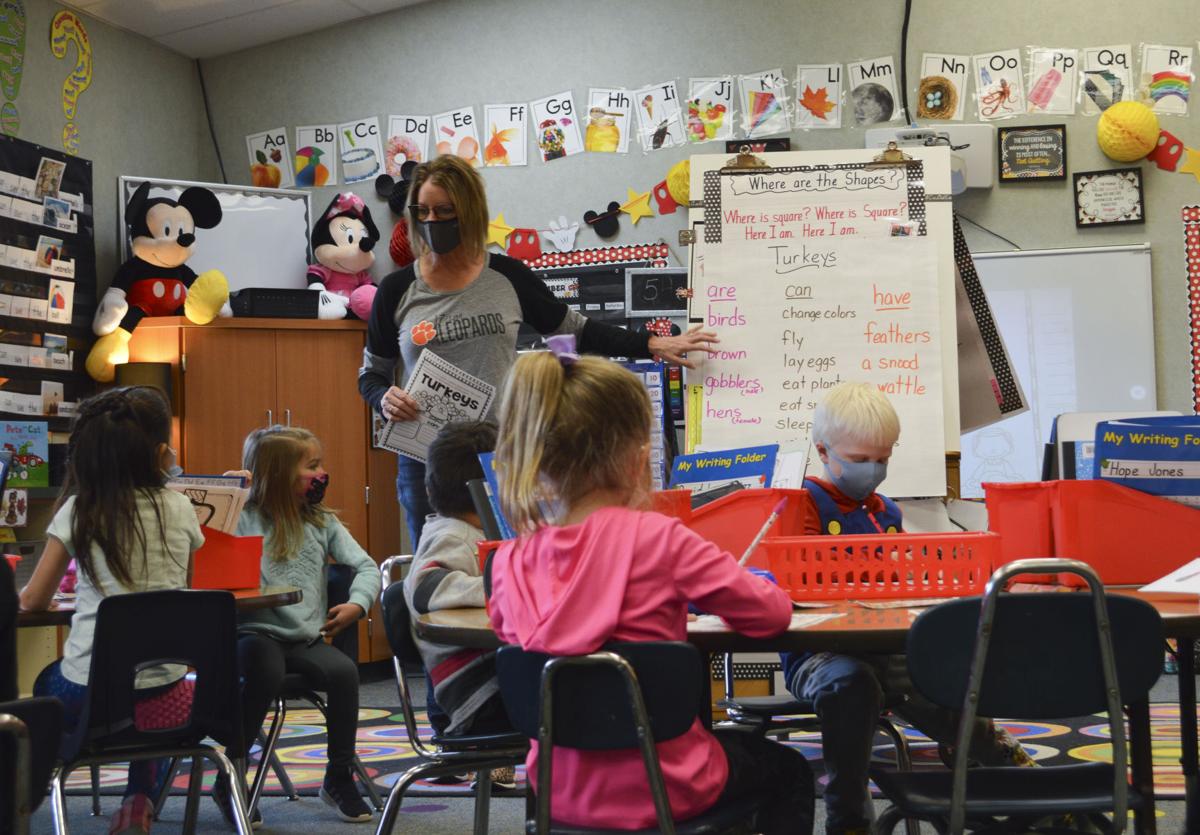 Pam Belton delivers a lesson on turkeys and sentence structure to her kindergarten class at Hilton Elementary School in Zillah, Wash., on Friday, Nov. 19, 2021. 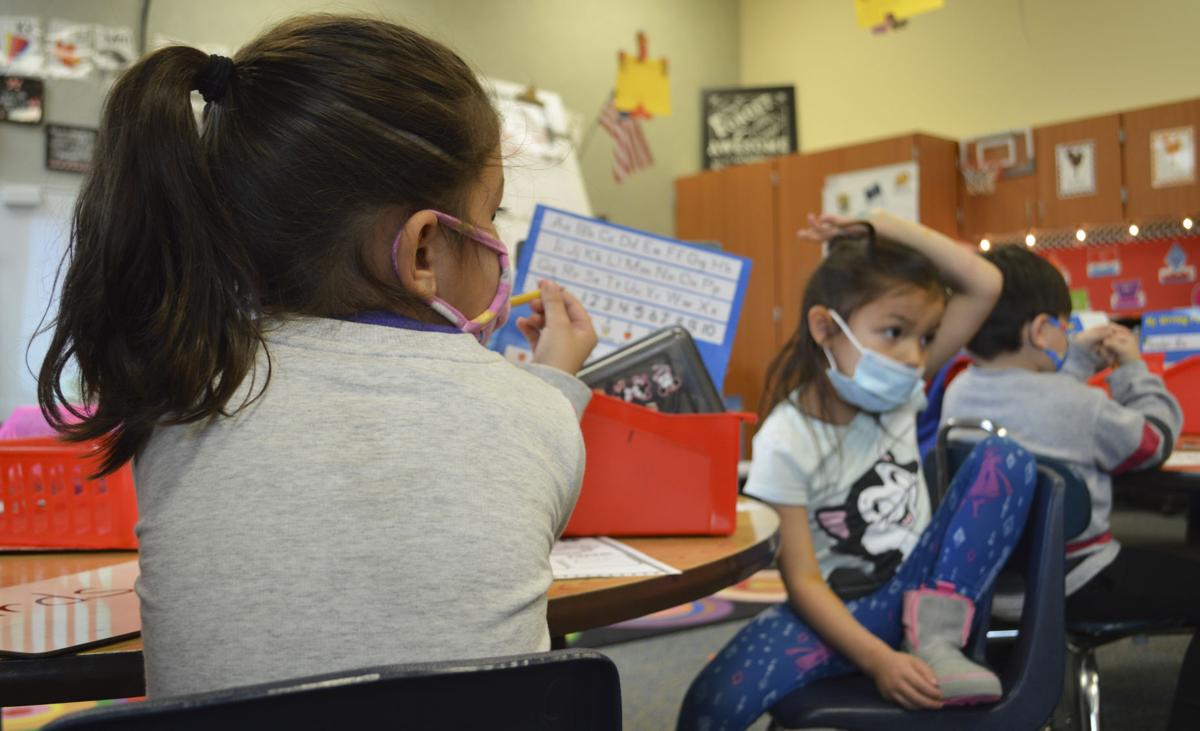 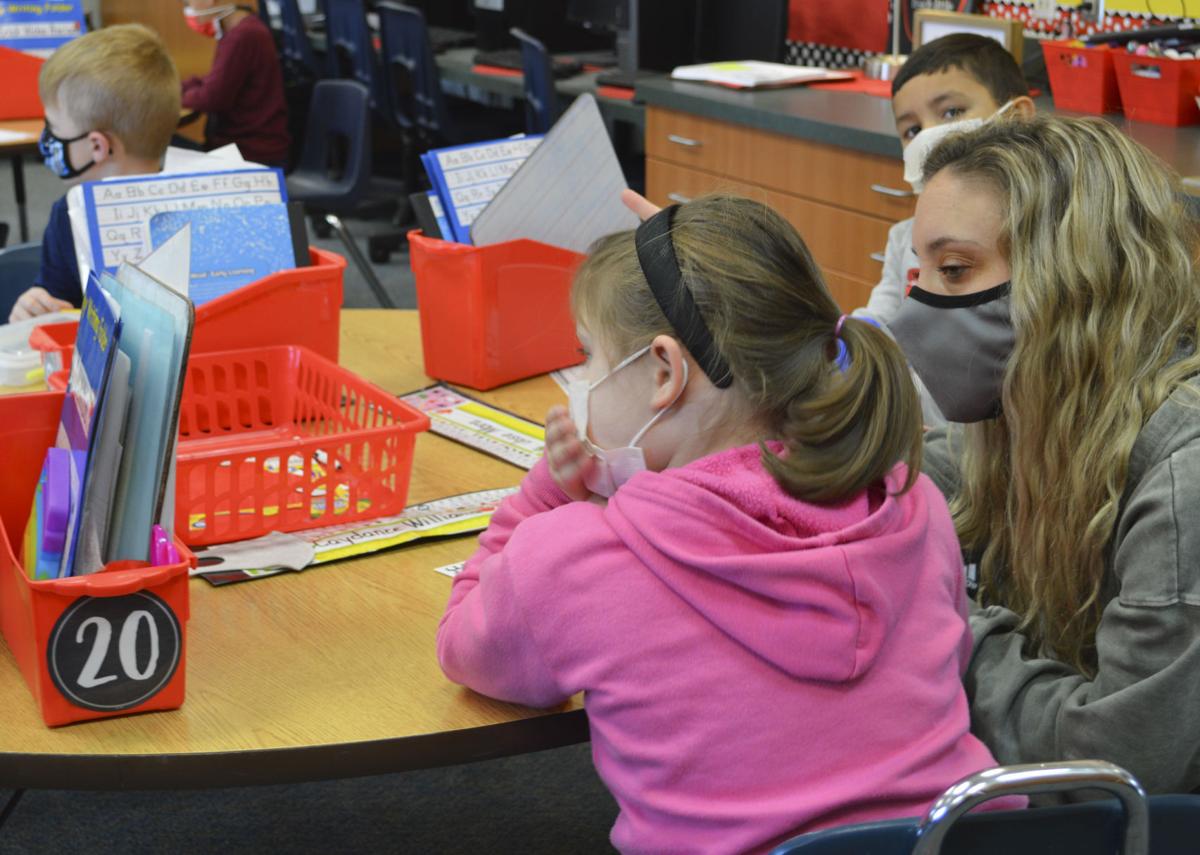 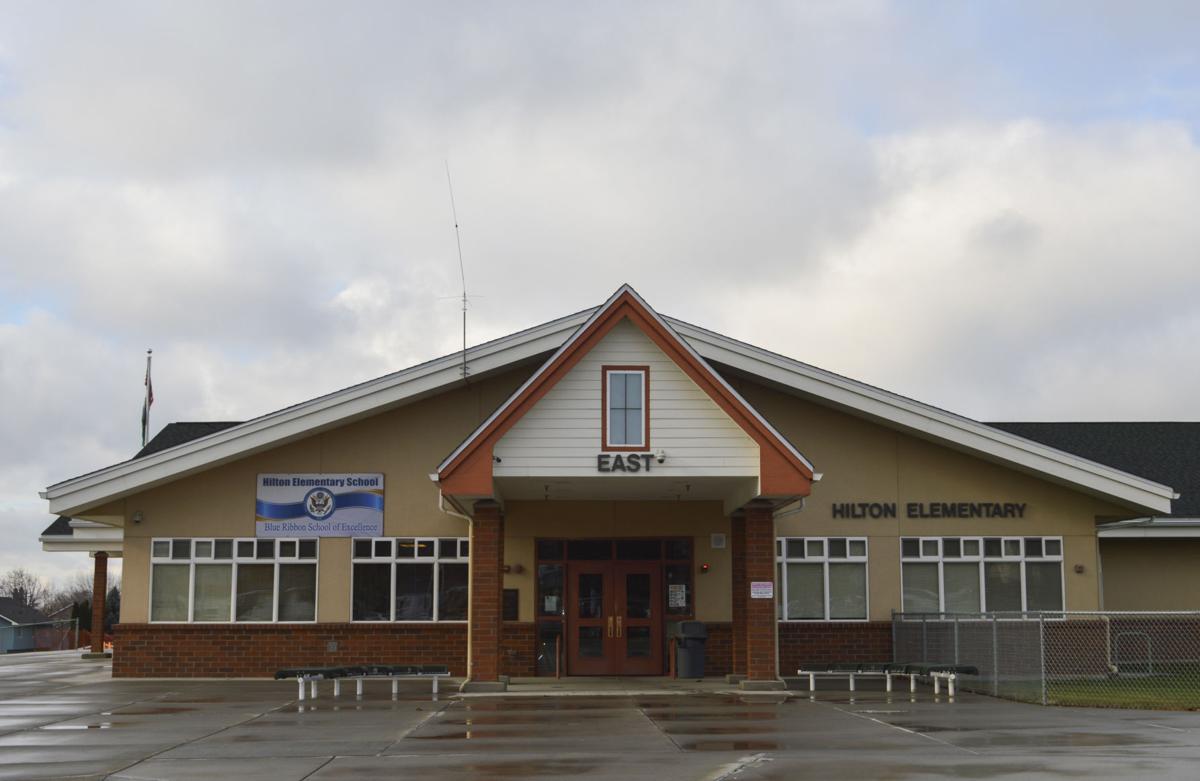 Hilton Elementary School in Zillah serves about 300 students in transitional kindergarten through second grade in the 2021-22 academic year.

Gail Gregory works with a student in her second-grade class at Hilton Elementary School in Zillah, Wash., on Friday, Nov. 19, 2021.

Pam Belton delivers a lesson on turkeys and sentence structure to her kindergarten class at Hilton Elementary School in Zillah, Wash., on Friday, Nov. 19, 2021.

Hilton Elementary School in Zillah serves about 300 students in transitional kindergarten through second grade in the 2021-22 academic year.

The walls and classrooms of Hilton Elementary School in Zillah are adorned with laminated cards to teach kids alphabet letters, cartoon characters that teachers choose as a room theme, and paper turkey crafts for the Thanksgiving season.

But the windows in the school office are crowded with plaques celebrating the school’s many awards. A large banner outside the building announces a Blue Ribbon distinction from two years back.

It’s time to add another award to the list.

Hilton was named a National Elementary and Secondary Education Act Distinguished School for the 2021-22 school year.

Schools are chosen by their state’s educational agency, in this case the Washington Office of the Superintendent of Public Instruction. This year, the state chose two nationally distinguished schools. Nationwide, no more than 100 schools may receive the honor in a single year.

“Our teachers are fantastic. They’re hard workers. They care about our students and families,” said Principal Ryne Phillips. “I think that was just icing on the cake with this award.”

Schools are selected based on a number of factors including student enrollment, percentage of students living below the poverty line, continuous positive academic trends, and shrinking the achievement gap.

The award comes with a $30,000 prize that the school will spend on professional development trainings and sending some teachers to a national ESEA conference in February, Phillips said.

A history of excellence

This distinction is the latest in a recent streak of commendations for Hilton, which serves about 280 students in a transitional kindergarten through second-grade program. Last year, the school was named an ESEA State Distinguished School by OSPI. In 2019, Hilton was the only elementary school in Washington recognized as a National Blue Ribbon School.

“The accolades are well deserved,” said Zillah Superintendent Doug Burge. “Their passion for kids is second to none and we just want to keep up the great work at the building.”

Phillips said that after a year and a half of teaching in a pandemic, the award reaffirmed the work teachers and staff have done to keep learning going during a challenging time.

After going remote in March 2020, the school began hybrid classes in October 2020 and resumed full, in-person schooling in April of this year.

This year’s national distinction recognized Hilton for its work in closing the achievement gap between student groups. The achievement gap refers to the difference in educational outcomes that often forms between groups of students with differing levels of privilege based on things like race or household income.

About 54% of Hilton students were considered low income in the 2020-21 academic year, according to its OSPI report card. Nearly a quarter of the student body were English language learners and almost 5% were considered migrants.

Hilton is a Title I school, which is a federal program that gives additional funding to schools with high levels of students from low-income families, with the hopes of providing more equitable education. About one-third of Washington’s public schools are Title I, according to OSPI.

Washington’s standardized testing was canceled in the 2019-20 school year due to the pandemic. Tests for the 2020-21 school year were delayed until the fall of 2021.

At Hilton, students take a benchmark test in the fall, and those who are identified as needing additional help are put in the learning assistance program, said Phillips, who has been principal since 2016.

“And then we implement a plan of support for interventions, and ultimately what we want to see through intervention support — both in the classroom or intensive support outside the classroom — is growth at the end of the year,” he said.

Pam Belton, a kindergarten teacher with 15 years of experience in the district, said closing the achievement gap has been a team effort.

“It’s a combination between our specialists, our (English language) teacher, our intervention teacher, the classroom teachers and our principal, too, just making sure that all teachers are working together,” she said.

The other factor teachers and staff highlighted in Hilton’s success is not something that can be tested.

“We really pride ourselves on relationships with our students and families,” Phillips said. “That’s our foundation.”

Since Hilton serves Zillah’s earliest grades, the connections built at that school lay the groundwork for the next several years in the district, Phillips said.

Second-grade teacher Caren Moritz has worked at Hilton for 30 years. She’s already on to her second generation of students, teaching the children of students she taught years ago. She said the community in Zillah is strong.

“We communicate a lot with our families just so they know that we see what their children need,” she said. “Our conferences are usually nearly 100% (participation), which is amazing that we get to speak with every family, now by Zoom or face to face.”

Still, Phillips acknowledged many schools in the area prioritize community relationships and are working hard to close the achievement gap, just like Hilton.

“There’s plenty of schools around us, too, that are doing the same things we’re doing,” he said. “I would just say from the district top … down, across each school in our district, we are firmly committed to engaging with our communities and the students.”

First-grade teacher Denise Reynolds is a former Hilton parent who previously worked as a paraeducator at the school. She worked at a different school while earning her teaching degree but returned a few years ago.

“I couldn’t wait to come back here because of the camaraderie of the staff,” she said. “Just how the teachers here genuinely care about their students, where sometimes you don’t see that.”

Second-grade teacher Gail Gregory is in her 31st year at Hilton. She said many of the teachers there have stuck around for decades, which creates a deep connection.

“Hilton staff and students truly are a school family,” she said.