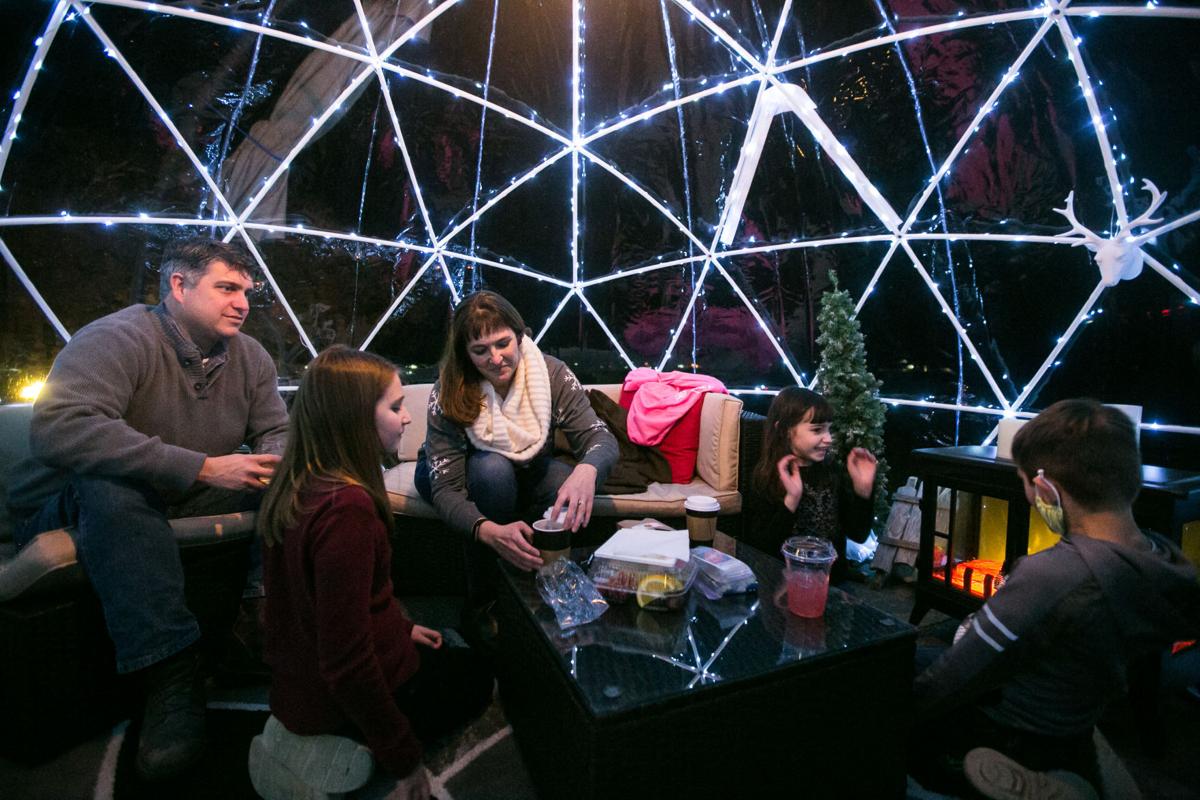 Darren Gamache, left; Lilly Gamache, 10; Ashley Gamache; Ivy Gamache, 8; and Oliver Gamache, 8, dine in a “Wine Bubble,” or a geodesic dome, at Treveri Cellars in Wapato, Wash., Monday, Dec. 21, 2020. The domes, available by reservation only, are heated and furnished. 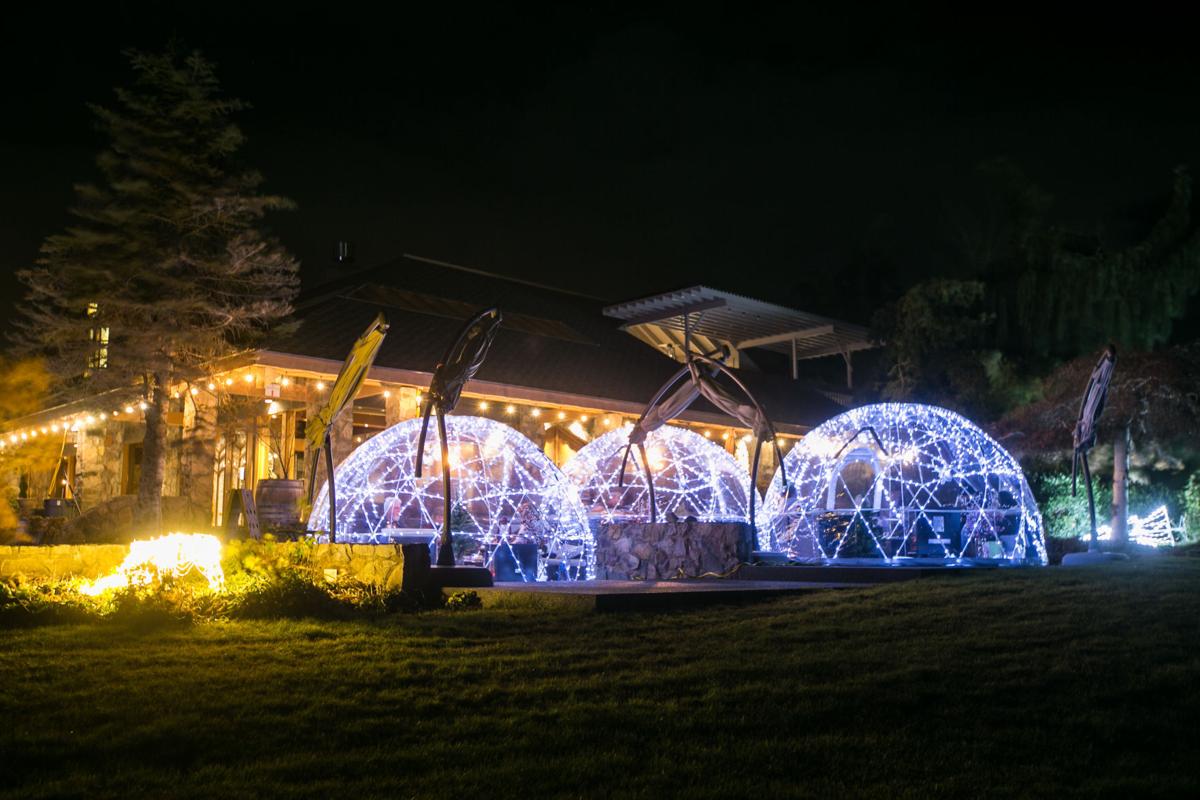 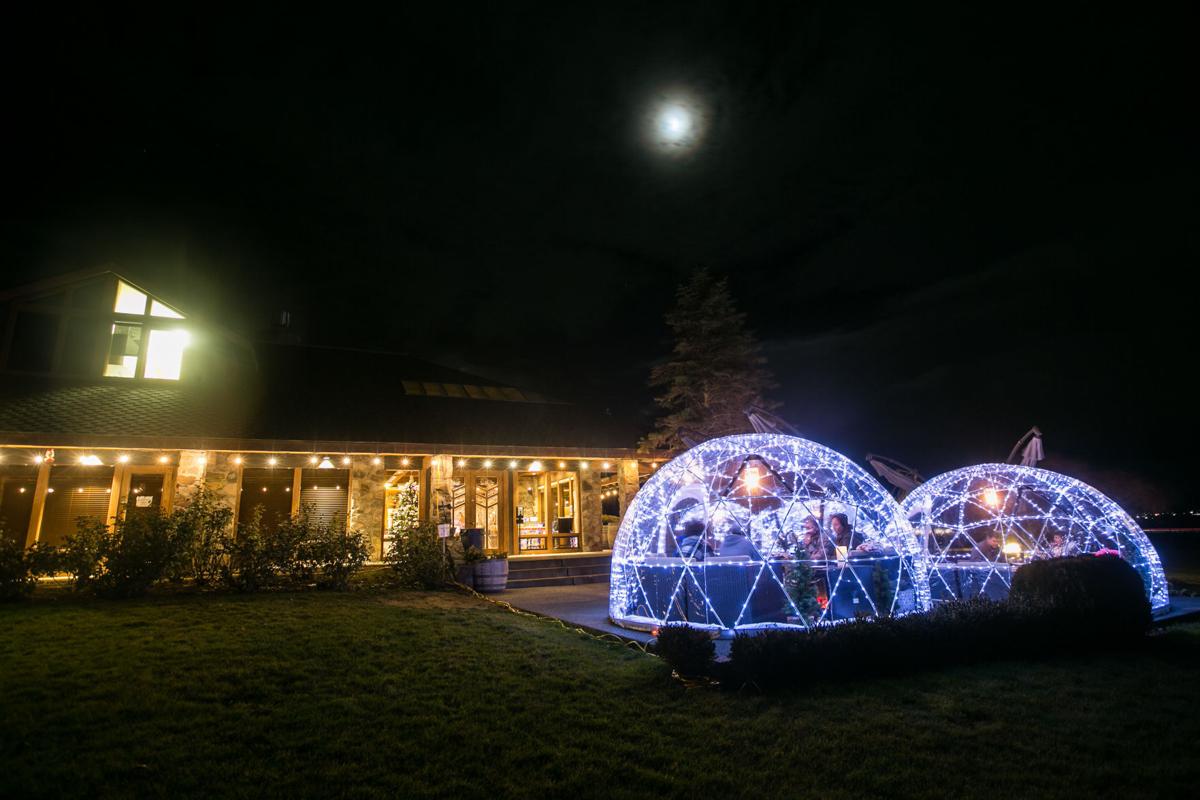 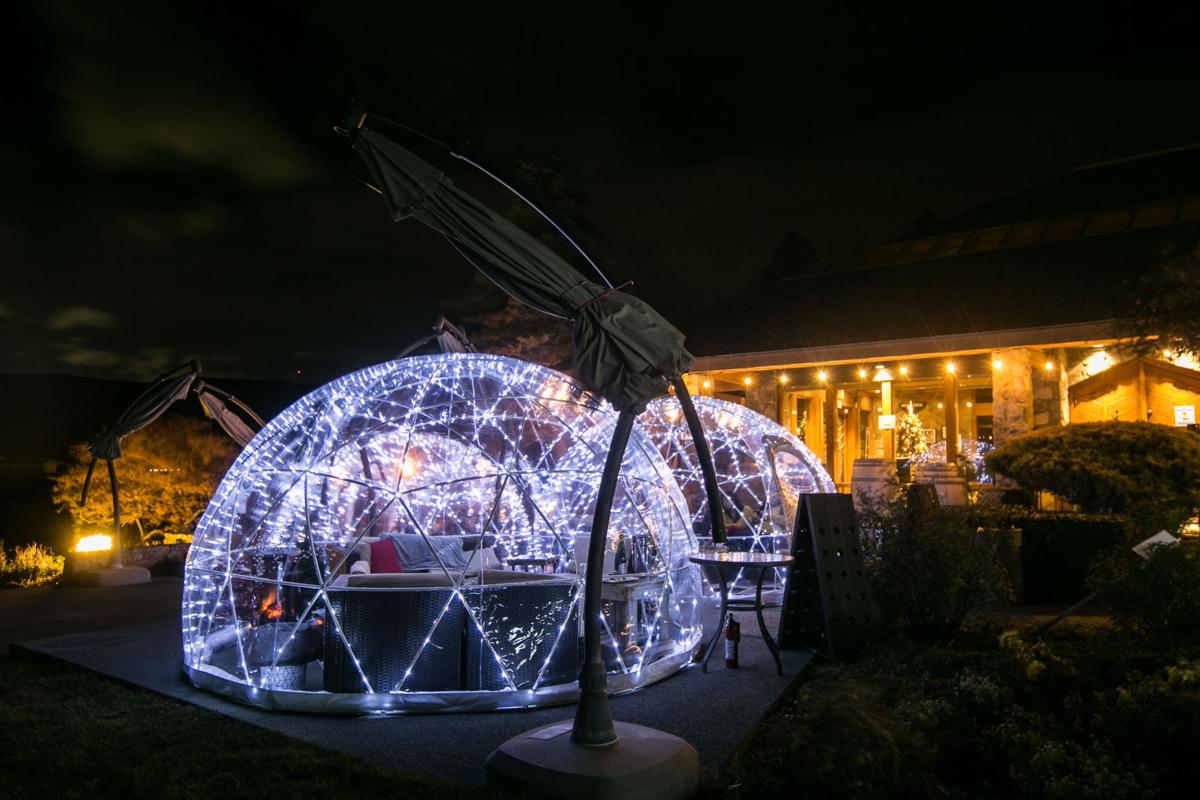 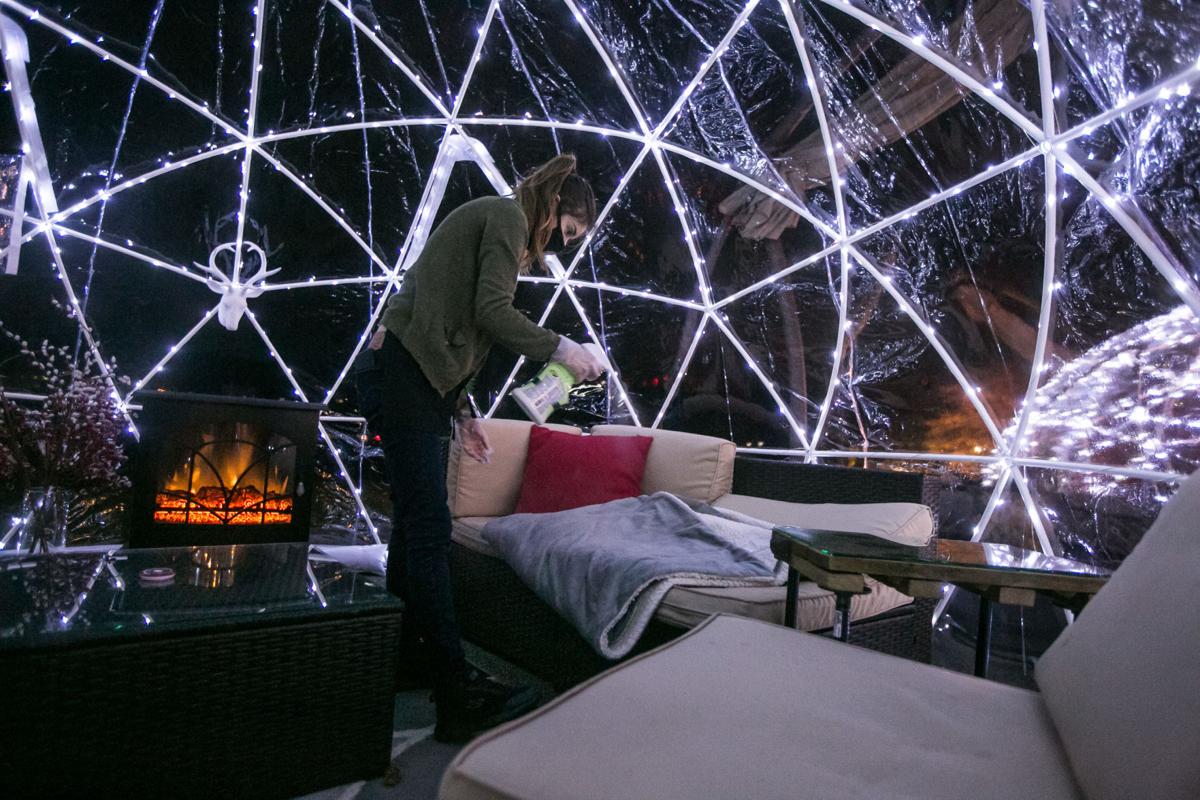 Ani Cornejo, an employee of Treveri Cellars, sanitizes a “Wine Bubble,” or a geodesic dome, Monday, Dec. 21, 2020, after a reservation at the winery in Wapato, Wash. As a preventative measure against the spread of the novel coronavirus, each dome is aired out and sanitized after every reservation.

Darren Gamache, left; Lilly Gamache, 10; Ashley Gamache; Ivy Gamache, 8; and Oliver Gamache, 8, dine in a “Wine Bubble,” or a geodesic dome, at Treveri Cellars in Wapato, Wash., Monday, Dec. 21, 2020. The domes, available by reservation only, are heated and furnished.

Ani Cornejo, an employee of Treveri Cellars, sanitizes a “Wine Bubble,” or a geodesic dome, Monday, Dec. 21, 2020, after a reservation at the winery in Wapato, Wash. As a preventative measure against the spread of the novel coronavirus, each dome is aired out and sanitized after every reservation.

Every year, visitors flock to the Yakima Valley in throngs to tour one of the Pacific Northwest’s most well-known winemaking regions, bringing a big boost to the local economy with them.

The wine industry in Yakima County accounted for 1,900 direct jobs, $77.4 million in labor compensation and $826.4 million in business revenue in 2018, according to a report by the state Office of Financial Management.

The winter months are key for wineries, which rely on gift-giving and holiday celebrations as the grape-growing season winds down. But like many businesses in the hospitality industry, wineries in Yakima are struggling to turn a profit amid the extension of coronavirus restrictions.

“Certain wineries are saying if I can only have 25% of the people in and I don’t have an ability to put people outside, it’s not cost-effective for me to incur the expenses of being open. They’ll stay closed until they deem it’s a profitable margin for them to be open,” she said.

Yakima’s wineries, mostly direct-to-consumer businesses that sell wine out their front door rather than through other distribution channels such as grocery stores, have been particularly hard hit by closure orders and drop in traffic.

“Being closed the majority of the year has had a huge impact on Yakima wineries,” Glover said. “For example, some wineries in the area haven’t been able to sell last year’s vintage so they don’t have the revenue to grow a new one, or room in the cellar,” she said.

Steve Warner, president of the Washington State Wine Commission, said travel restrictions have cut down on the flow of tourists, leading to plummeting sales at area wineries.

“The decrease in travel has had a significant impact on (wineries’) revenues — not only the restrictions for tourists but also local visitors, such as people from the greater Seattle area who tour through Yakima Valley and onto Walla Walla and the Columbia Gorge,” he said. “With a lot of those restrictions in place it has had a significant impact.”

Some wineries have made changes to their business models that could have lasting benefits. Many have adopted free shipping models, expanded wine clubs, and improved tasting rooms. Others began offering outdoor seating, and are developing partnerships with local restaurants, supermarkets and neighboring wineries, Warner said.

“We’ve seen a lot of ingenuity in 2020. They’re doing everything they can to adapt while following the rules so they can keep their small businesses running,” Warner said.

Emily Fergstrom, owner of Fortuity Cellars in Wapato, who was set to have a grand opening in April 2020, said she’s upped her digital marketing and online sales amid a steep decrease in projected sales this year.

“I’ve heard people say the word of the year is definitely pivot,” she said. Fortuity wasn’t able to open until July due to coronavirus restrictions.

“We really have only been able to be open five months out of this year. So now that we’ve moved into the winter months and everything is outdoors, we’ve seen our revenues drop in half,” she said.

{p dir=”ltr”}But she says the pandemic has strengthened Fortuity’s connection to the local community.

{p dir=”ltr”}“Yakima is notorious for supporting its own and so we are very fortunate,” she said. People have been troopers — I’m consistently amazed at people that want to come out and support local. They bundle up and bring a blanket and sit by our heaters — it’s so gratifying to see local residents or wine club members showing up.”

{p dir=”ltr”}Paul Vandenberg, co-owner of Paradisos del Sol Winery in Zillah, says wine clubs have been crucial for wineries during the pandemic.

{p dir=”ltr”}“Wineries that are engaging with members and have pursued wine clubs aggressively definitely have an edge right now,” he said.

{p dir=”ltr”}A wine club is an arrangement where a customer signs up to buy a certain amount of wine each year, providing consistent customers to wineries.

{p dir=”ltr”}But Vandenberg said many neighboring wineries he’s spoken with are facing crippling hardship, even as they look to innovate.

{p dir=”ltr”}“Our season is pretty much from the first of April to the end of October, and that is for most wineries 75% or more of their business for the year. This year of course we were shut down for the early part of summer completely, so that drove that business to pretty close to zero,” he added.

{p dir=”ltr”}Like the other wineries, Paradisos del Sol has dreamed up alternative strategies to cope with the changes.

{p dir=”ltr”}“My wife’s mother lives in Seattle and she’s been going over every three weeks so we started offering free delivery to customers in the greater Seattle metropolitan area,” he said. “We’ve really upped it to the point where I actually made three trips in November.”

{p dir=”ltr”}Christian Grieb, co-owner of Treveri Cellars in Wapato said Treveri is hard at work keeping up with the constantly shifting restrictions.

{p dir=”ltr”}“We’ve had to sort of shift business models almost five times you know this year,” he said. Treveri, now outside only, has set up “wine igloos,” outdoor domes with heaters that offer as semi-indoor seating while complying with coronavirus restrictions.

{p dir=”ltr”}While some have expressed concern over their safety, Grieb says the igloos comply with CDC guidelines.

{p dir=”ltr”}”You need to vent the dome completely for 15 minutes before the next group arrives,” he said. “We also sanitize all the surfaces in there, including a fabric sanitizer for the couch seating, so we really do a thorough job of cleaning out the bubbles.”

{p dir=”ltr”}But Warner of the wine commission says he is hopeful wineries will come out of the pandemic stronger than they were before.

{p dir=”ltr”}”Wineries have shown that they can adapt, overcome and innovate, he said. “Although it’s been a hard year for the wine industry, a lot of people have learned new strategies that they can take forward even after the pandemic is over.”