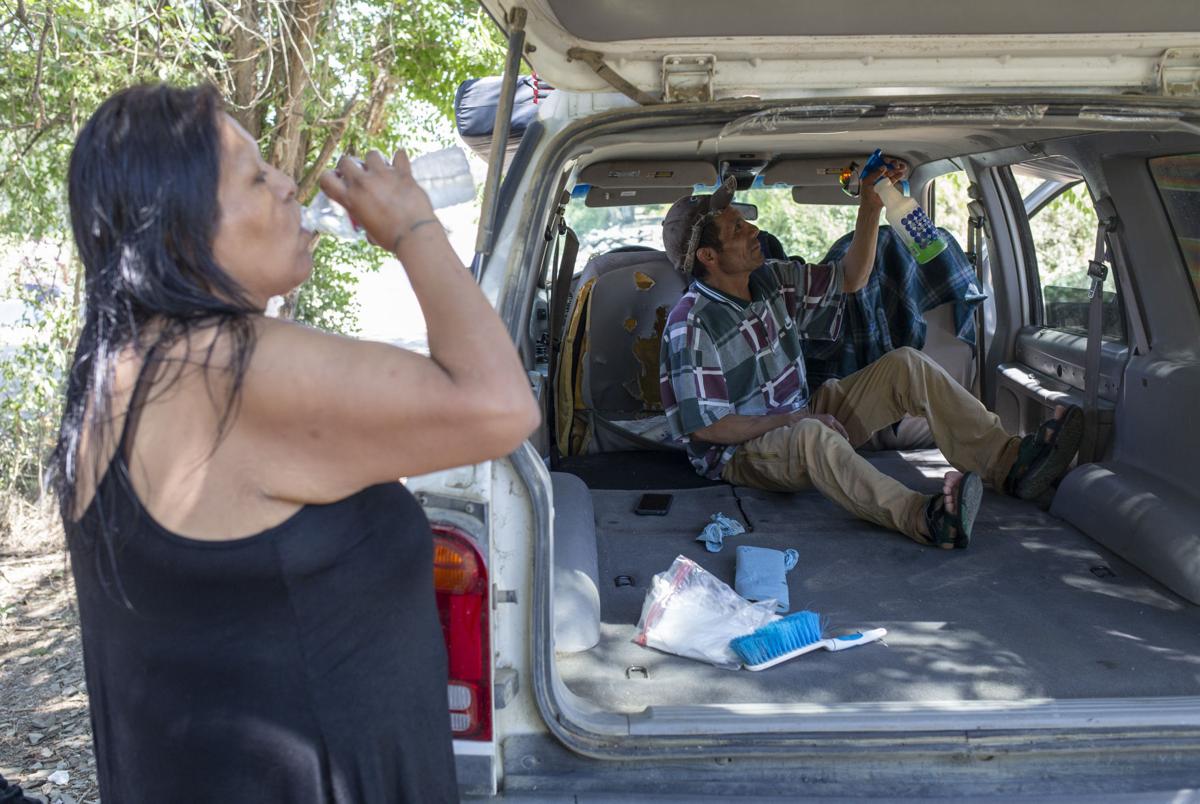 Nora Perez, left, takes a drink of water as her fiancé Boni Garcia, right, cleans the back of their vehicle where they sleep near the Yakima River Wednesday, June 30, 2021 in Wapato, Wash. Perez said they go to Noah's Ark homeless shelter to shower and eat, but stay by the river because it's quiet and they can swim. 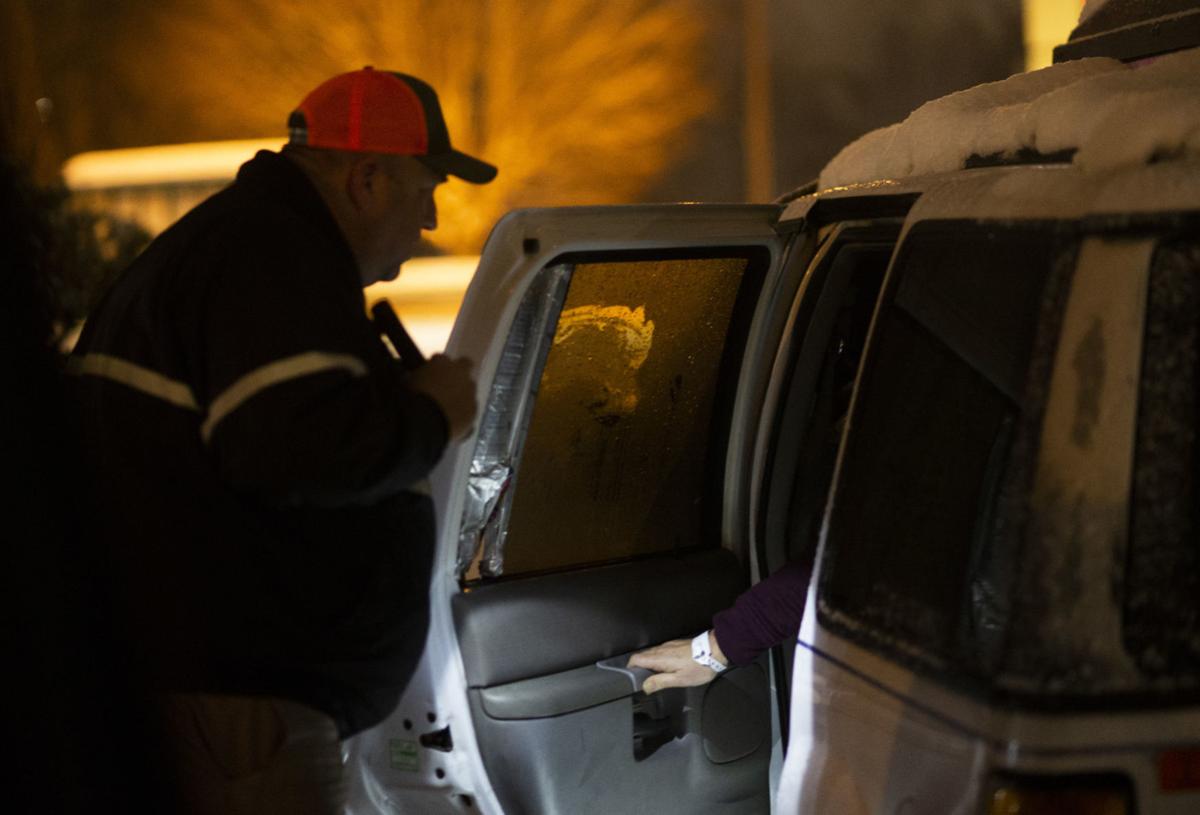 Nora Perez, left, takes a drink of water as her fiancé Boni Garcia, right, cleans the back of their vehicle where they sleep near the Yakima River Wednesday, June 30, 2021 in Wapato, Wash. Perez said they go to Noah's Ark homeless shelter to shower and eat, but stay by the river because it's quiet and they can swim.

The city of Yakima will designate at least one secure parking lot where people who are living in their vehicles can park their car, the City Council decided Tuesday.

The parking lot for Homestead Act vehicles will be located on city-owned land east of I-82. It is required to have a behavior management system, contiguous fencing and lockable gates, site management and monitoring.

The motion was introduced by Councilmember Brad Hill as an alternative to a motion by Councilmember Kay Funk that failed to pass. Funk’s plan would have put the parking lots in current city lots, many of which are located in downtown Yakima, and would have asked private land owners to offer up additional space.

“I do believe the status quo is unacceptable,” Hill said. “Let’s do something to increase capacity and safety for people who are, thank God, not quite living on the street, and they’ve at least still got a car to sleep in, but have it at one concentrated site where there are no neighbors of any significance where we already have service providers established.”

He said the project would not cost an enormous amount of money. To help lower costs, construction companies could donate extra fencing, he said.

“The first element of safety that’s frequently desired is a personal space and lockable door,” Funk said. “Sleeping in cars is actually the cheapest way to provide that.”

Before Hill introduced a revised plan, some of the council members, including Mayor Patricia Byers, Assistant Mayor Holly Cousens and Councilmember Soneya Lund raised concerns about having the lot in the downtown area.

“I had a salon downtown, and one of the reasons why I ran for City Council is because there was an RV parked out in front of the salon for months at a time, and it was exhausting,” she said.

Lund was also concerned about the cost and the small number of people it would impact.

The annual point-in-time survey identified 663 individuals in Yakima County experiencing homelessness and 39 people in unstable housing in 2021. The number of unsheltered people increased in 2021, according to the report.

The report identified 47 individuals living in a vehicle, an increase of five individuals since 2020.

The council estimated about 39-49 families living in vehicles would be impacted by the motion.

Lund also pointed out that state law allows faith-based organizations to host individuals living in their vehicles in their parking lots if they wish.

Hill said the space east of Interstate 82 is an ideal spot because it won’t have an impact on downtown business owners.

“That’s what we’re talking about — people who are fortunate enough to have a car who are not totally on the street and helping them maintain that, I think that is a compassionate and reasonable thing to do,” Byers said.

Funk agreed the spot east of I-82 is an ideal location. Cousens also said she appreciated the new motion and said it was more methodical.

All the members present at the meeting supported Hill’s motion. Councilmember Jason White was absent.

The project will be carried out by the next council, which will include new members Danny Herrera in District 2, Janice Deccio in District 4 and Matt Brown in District 6. The council terms of Hill, Funk and White expire at the end of December.

The council failed to pass a motion Tuesday that would enact a “no sit/no lie” protection area around Yakima shelters.

Funk said it would protect individuals using services at the shelters.

Attorney Sara Watkins said the idea was raised by city staff as something other cities have used to address nuisance issues. She said she had not personally discussed it with Camp Hope or the Union Gospel Mission and it is just an option for the council to consider.

“This one really bothers me,” she said.

“What I wrote here is just saying I think that that would be desirable to protect people using our shelters,” Funk said.

Cousens said she thought the motion may be unconstitutional, while Byers added it would place an additional burden on police officers tasked with enforcing the ordinance.

The council was split while deciding whether or not the city should collect data to evaluate if a no sit/no lie ordinance would be viable and to determine the needs of the homeless population. The collection would include observations from downtown business owners on how many and at what time of day people are obstructing their businesses.

“If you don’t do any data collection, your downtown core is gonna deteriorate, you’re gonna be faced with these homeless problems for the remainder of your two years,” he said.

Lund was concerned about what the data would be used for.

“Unless we are talking about justifying a need for a place for those who are unsheltered to hang out, like a day shelter, then I do not like this at all,” Lund said.

Cousens also said she had concerns about what the data would be used for, but that she wasn’t against collecting it.

“If we have people that are willing to assist in collecting that data, I never think information is a bad thing,” she said.

Byers said she would feel uncomfortable asking business owners to collect the data, but she said observational data could be a good indicator of whether or not a no sit/no lie ordinance is needed.

The motion failed, with Byers, Cousens and Hill voting yes and Funk, Lund and Macias voting no.

The Yakima City Council is considering adding three west Yakima projects to its running list of road improvements, and residents have a chance to weigh in this month.

There are already too many homeless vehicles parked East of I82 at Camp hope, and between Sarge Hubbard park and Walmart. We don't want more homeless in Terrace Heights.

it's always "not in my backyard"

walk a mile in their shoes.

I'll be happy to suggest that they setup the parking on your property as soon as possible.