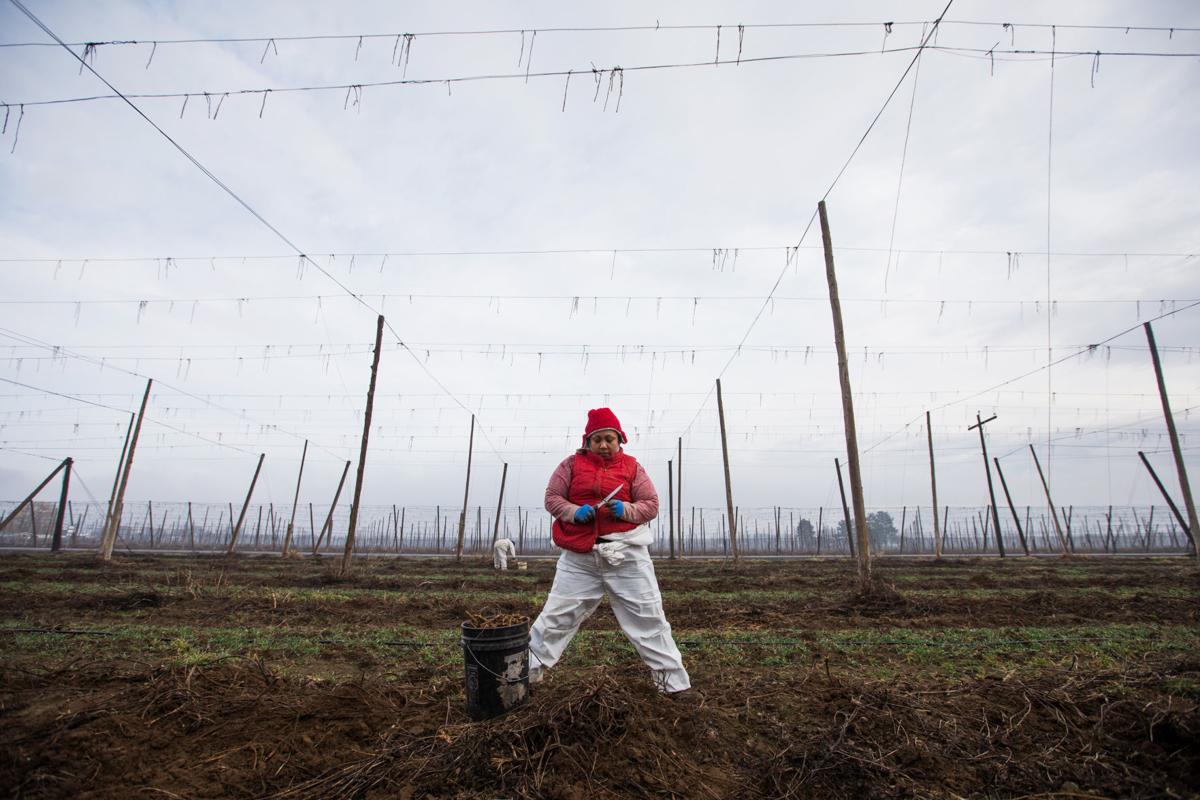 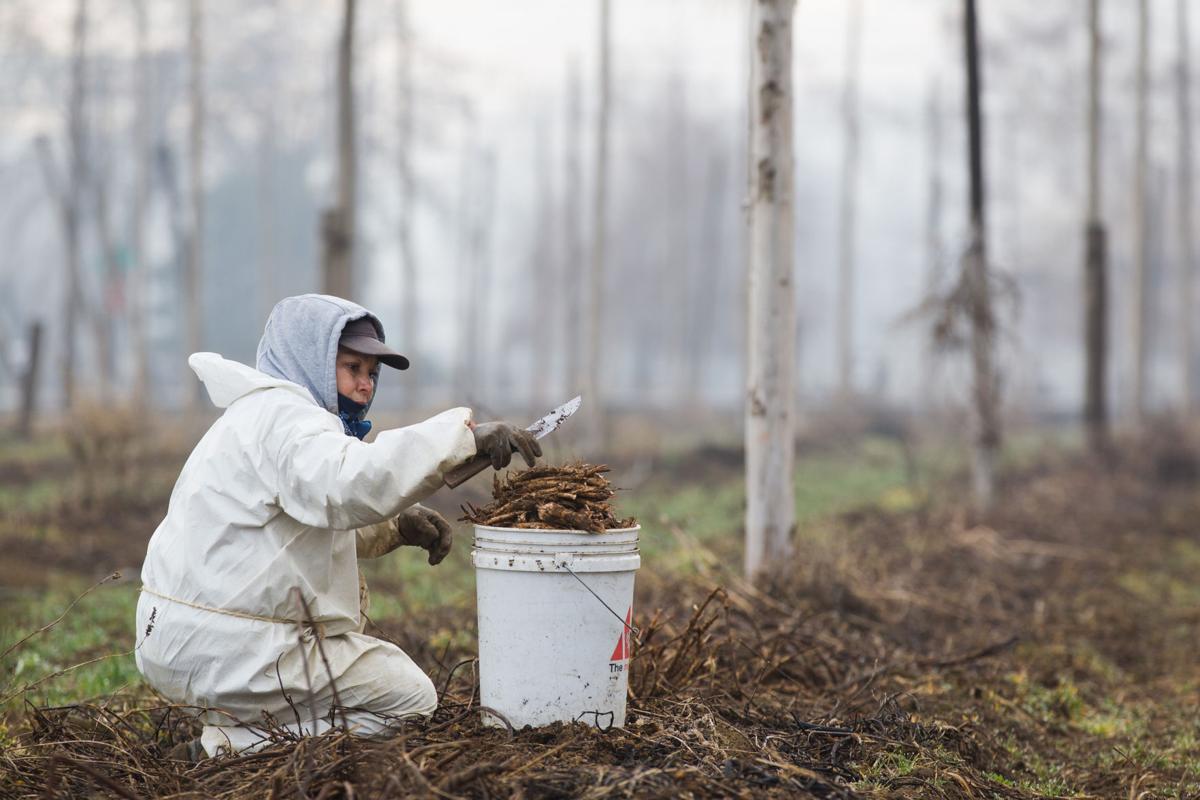 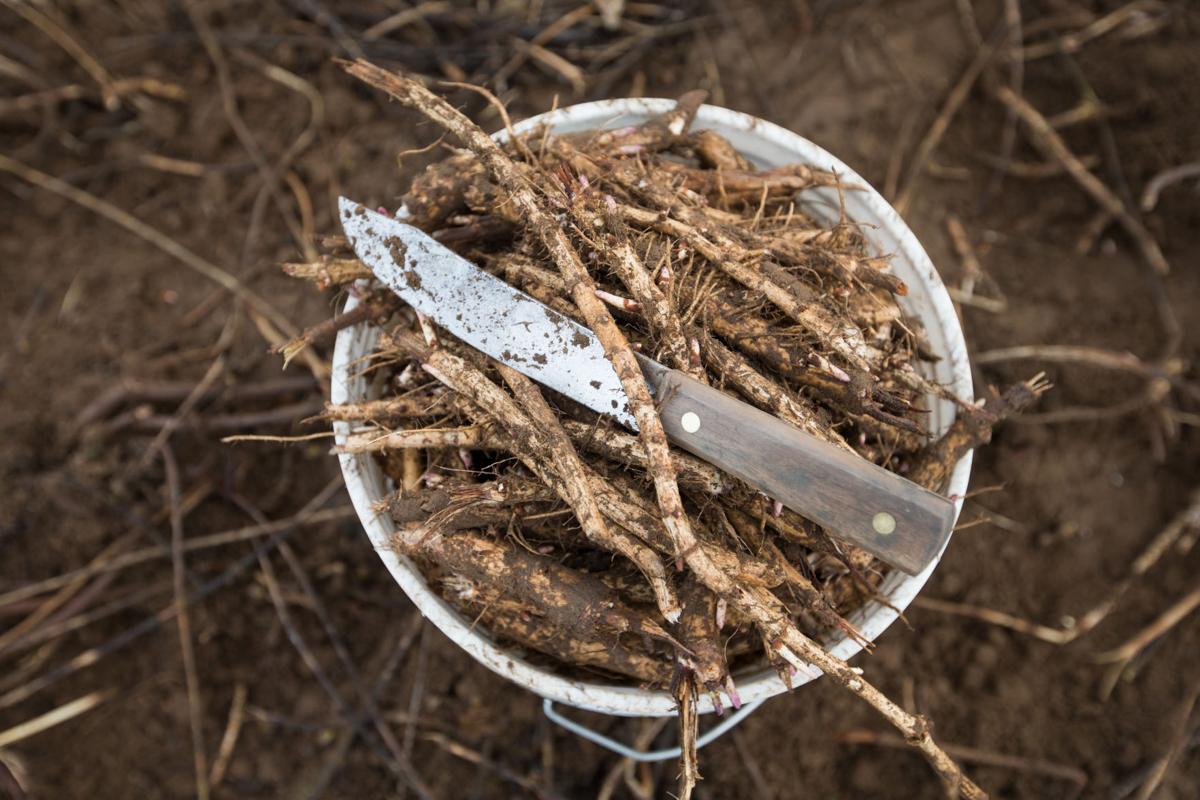 A knife rests on a bucket of hops roots after workers dug and trimmed them in a Roy Farms field while preparing this year’s crop in Moxee, Wash., Tuesday, March 14, 2017. (SHAWN GUST/Yakima Herald-Republic) 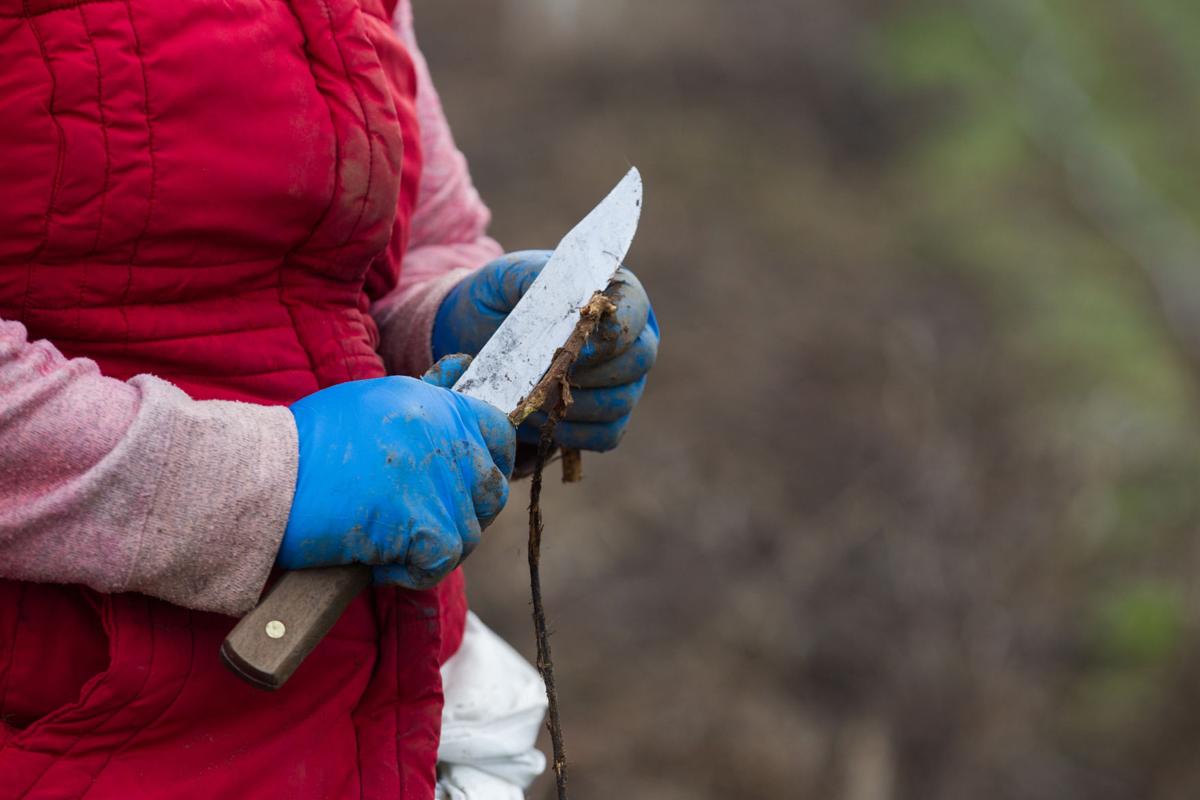 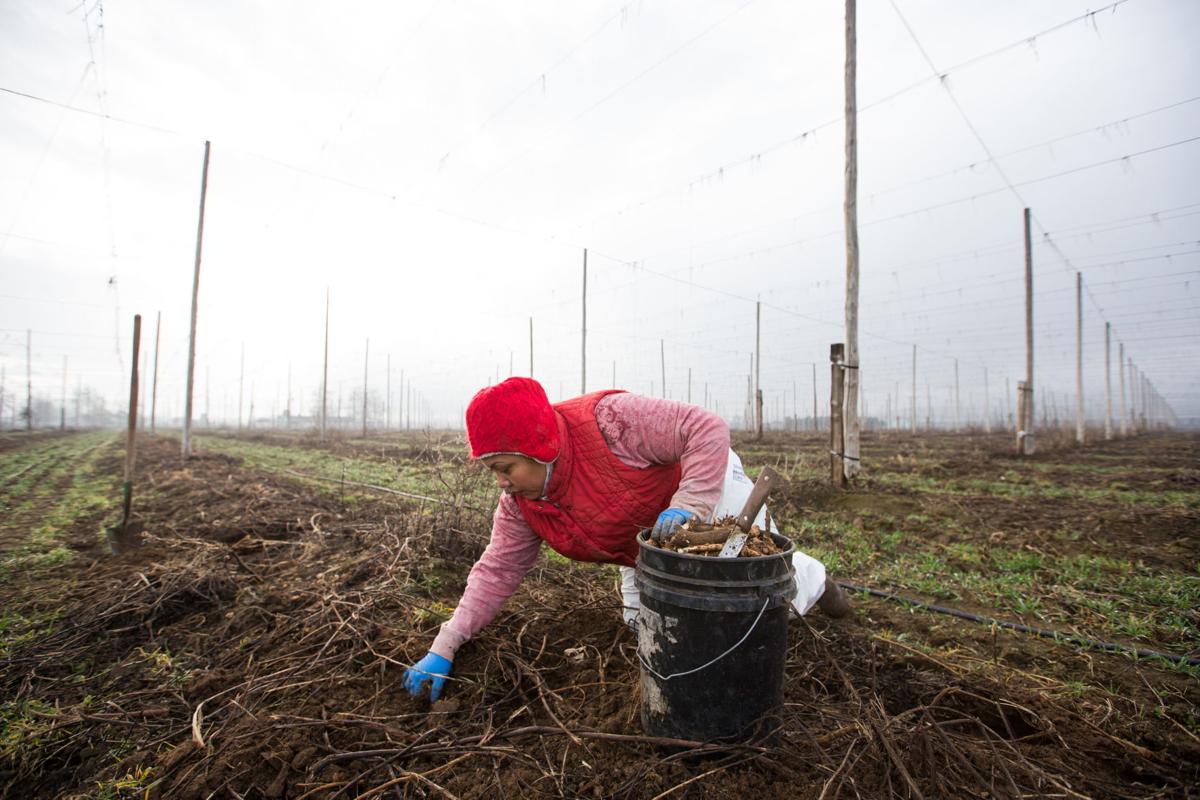 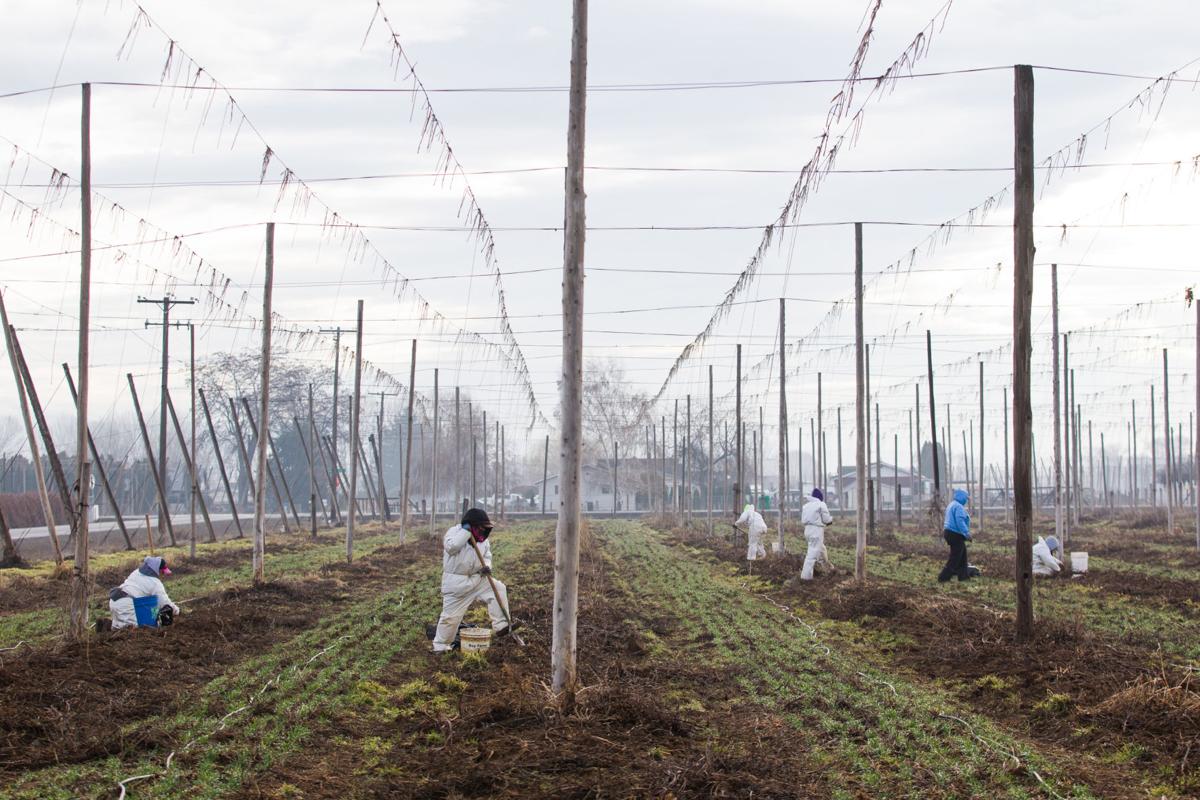 MOXEE, Wash. — Recent wet weather did not stop preparations for hop season at Roy Farms, although it did slow things down a bit.

Three tractors pulling lifts for crews maintaining the trellises got mired in a muddy hop field and were going to stay there until things dry out a bit. But other crews were out taking root cuttings to start new plants while discarded trellis poles were being ground into wood chips.

As Sean Benson walked through the field, he noticed a couple of hop plants already sending new vines up through the ground.

“We can plant hops in the spring, and collect a full harvest in the fall,” said Benson, Roy Farms hop division manager. While the plants do require a bit of work to get started and tended to, they are resilient, he noted.

Roy Farms, like other hop growers in the Yakima Valley, is gearing up for another season of producing a high-demand product.

In 2016, there were 37,444 acres of hops harvested in the Yakima Valley, an almost 30 percent increase from 2014, according to the U.S. Department of Agriculture. The Yakima Valley is the nation’s largest hop producer, with three-quarters of all hops grown in America coming from its fields.

Hops are used mostly by the beer industry as a flavoring agent. The cones can, depending on their variety, give beer either a bitter or citrus flavor. Benson said brewers will come out and check out the crops to see if they need to adjust their recipes to maintain a consistent flavor.

Ann George, Moxee-based Hop Growers of America executive director, doesn’t expect a significant increase in additional acreage this year, as last year’s harvest resulted in surpluses as demand decreased slightly. She said growers also are off to a slightly slow start with the wet weather.

Farmers start their work in early spring, when the plants start growing. Hops are grown from a perennial root, which sends out a vine that grows around twine strung from the overhead trellis.

When hops were first cultivated in the valley in the late 19th century, poles were used instead of twine, Benson said.

Spring is when the trellises are repaired, with rotting poles either shored up or replaced.

In the old days, the refuse would be put in a pile and burned, but Benson said the farm takes a more environmentally friendly approach by grinding the old poles into wood chips that can be used to control dust in the fields.

Typically, 778 hop plants — all female — are planted to an acre, started from root cuttings. On this particular morning, workers were in an 11-acre Moxee hop field cutting short sections of root to be used to start plants at another location. Workers made sure that the root contained an “eye” similar to a potato’s eye, ensuring that it would start a new plant.

They also cull the field to remove any plants that are not of the same variety or are male hop plants, identified during the harvest season. If the plants are allowed to pollinate, they will have seeds, which adds weight to the cone without additional flavor, Benson explained.

While hop growers try to eliminate males from the fields, he said a plant growing as far away as a quarter-mile can pollinate a commercial crop.

Starting in April, twine will be strung from the top of the trellis, 18 feet up, down to the ground into a cluster of anywhere from two to five plants. As plants grow, workers “train” them to grow on the twine in a clockwise direction, which ensures that they won’t unwind as their heads follow the sun across the sky each day.

They’re also angled so the vines don’t shade each other from the sun, Benson said.

Throughout the season “scouts” will go through the fields each week, looking for signs of disease and ensuring that the plants are getting sufficient water through the drip irrigation system.

“We’re not here to beat nature into submission,” Benson said. “We’re here to coax it along.”

The plants are typically harvested in late August and September.

YAKIMA, Wash. -- Local advocates say a push by the Legislature to invest in state tourism co…

Is trouble brewing for hops industry?