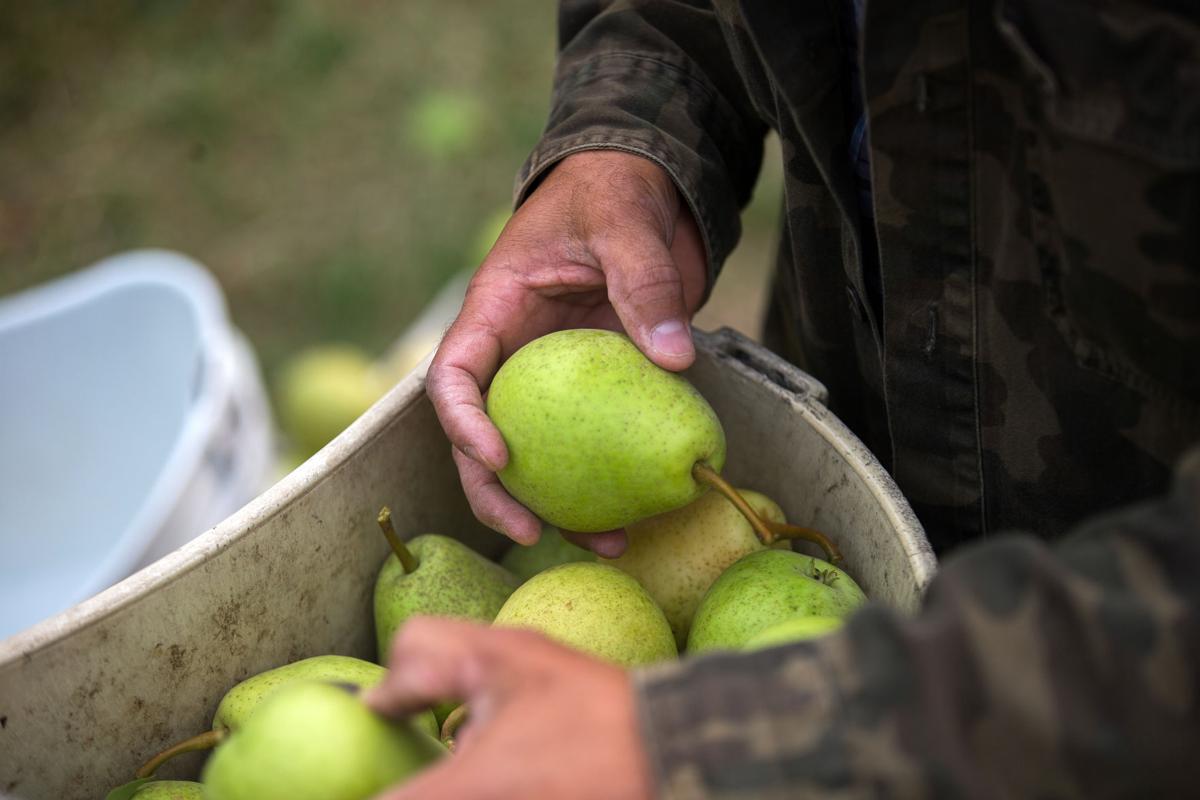 Manuel Gutierrez sorts pears at Johnson Orchards on Wednesday, Sept. 6, 2017, in Yakima, Wash. Gutierrez has worked with Johnson Orchards for more than 30 years with his brothers and nephews. (JOVELLE TAMAYO/Yakima Herald-Republic) 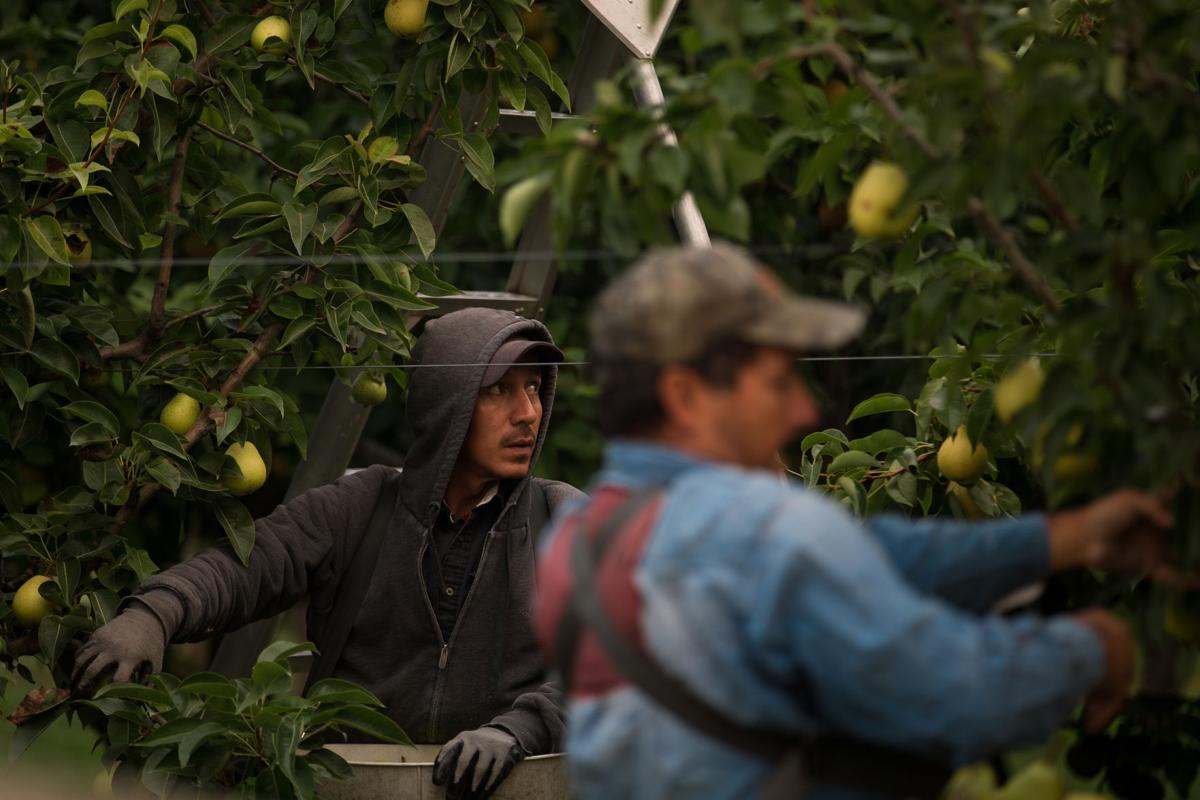 Israel Gutierrez, left, picks pears at Johnson Orchards with his brother, Roberto, on Wednesday, Sept. 6, 2017, in Yakima, Wash. The brothers have worked with the Johnson Orchards family for more than 20 years, alongside other relatives. (JOVELLE TAMAYO/Yakima Herald-Republic) 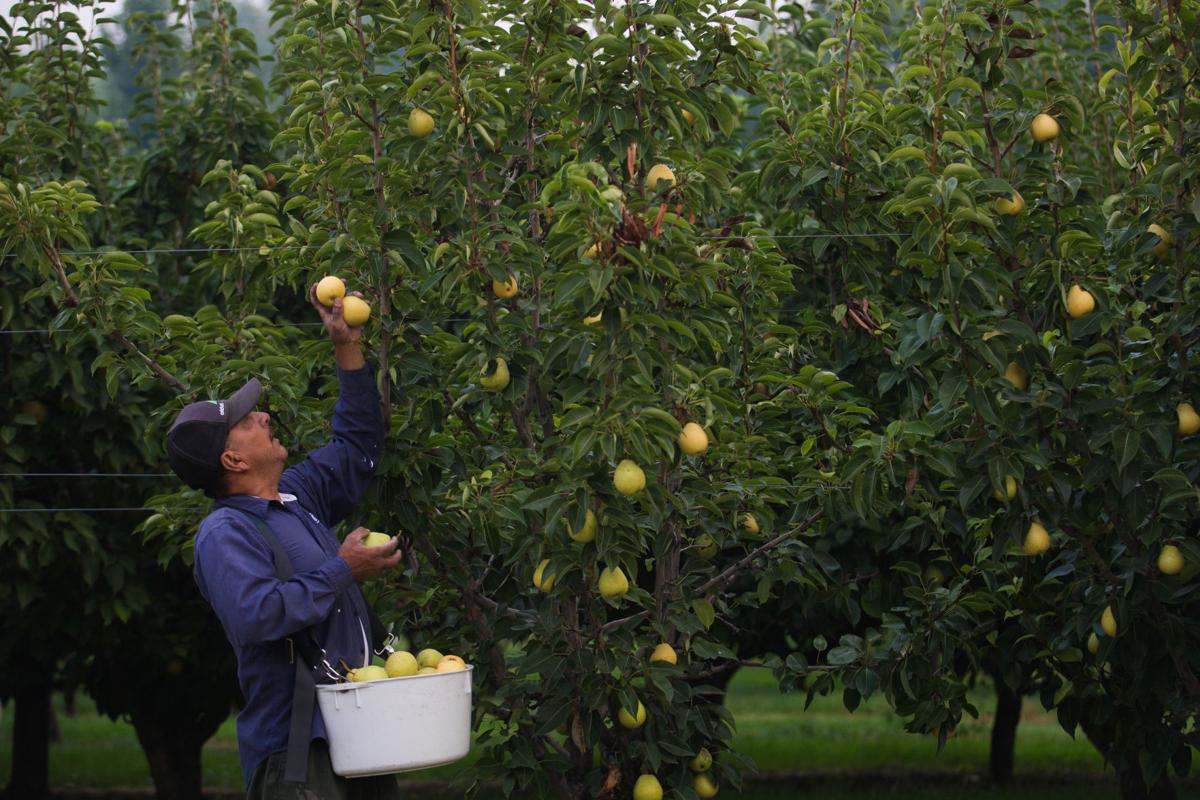 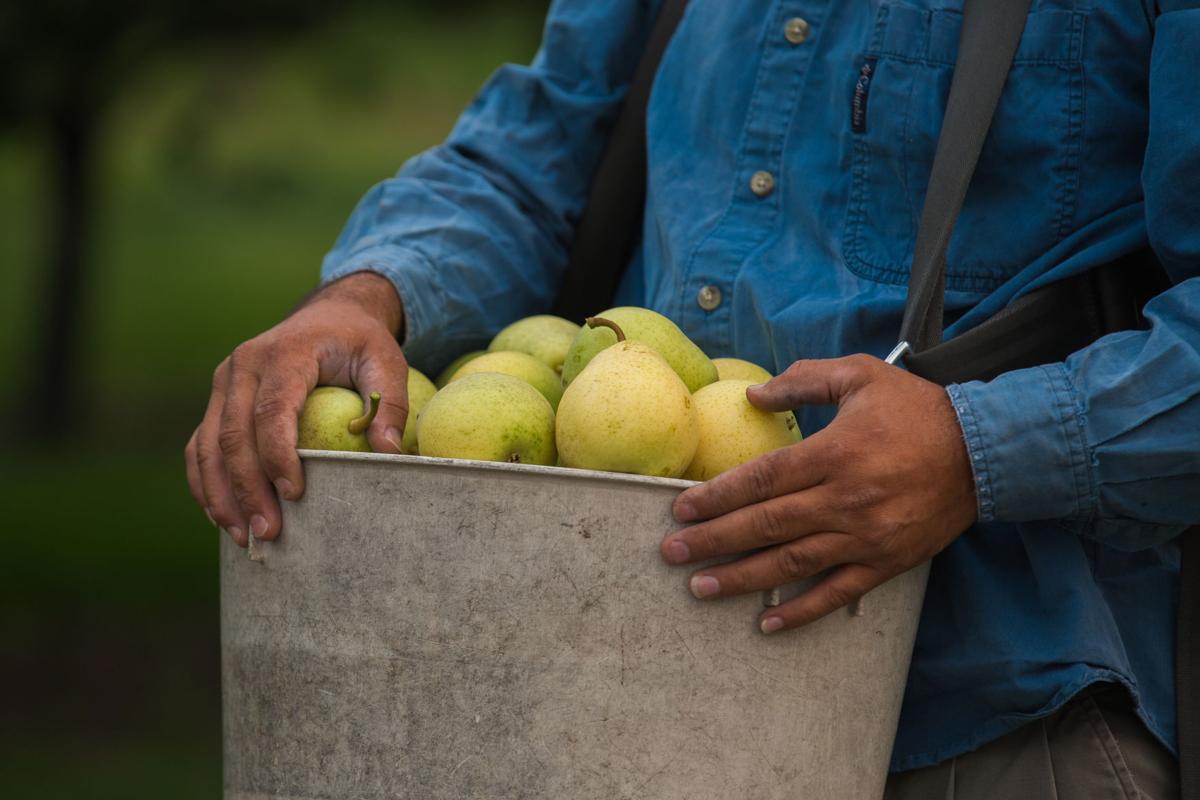 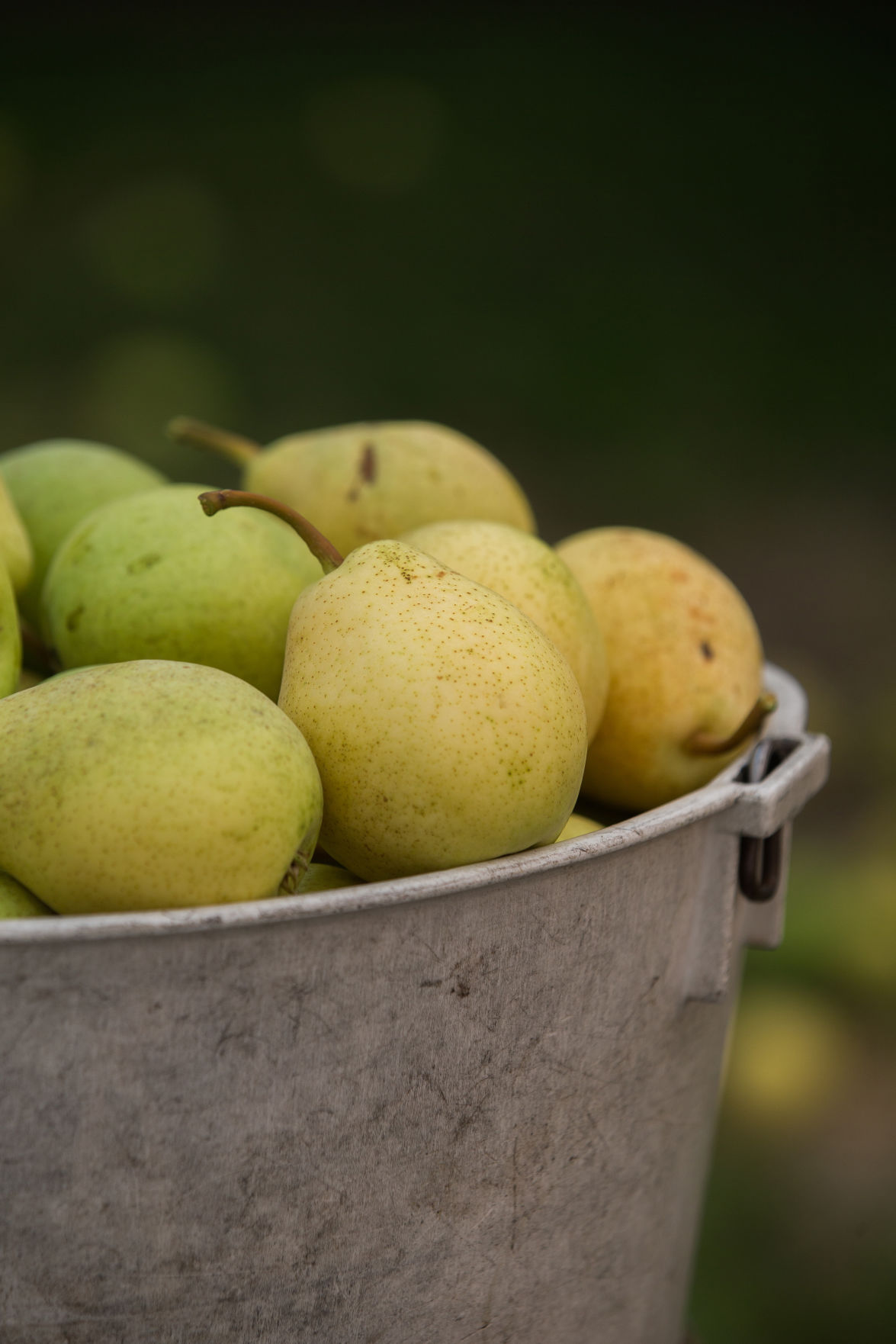 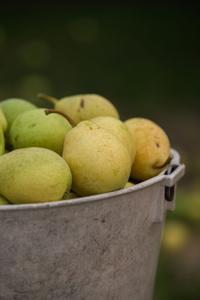 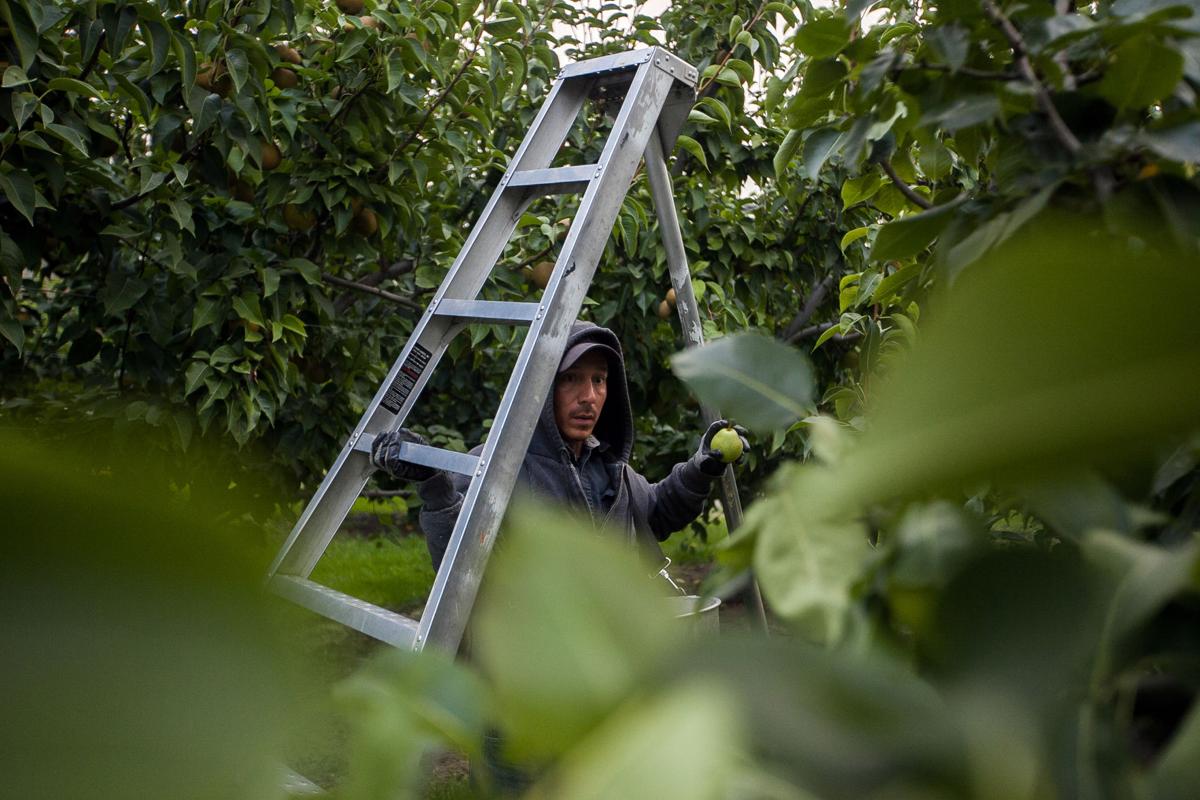 Manuel Gutierrez sorts pears at Johnson Orchards on Wednesday, Sept. 6, 2017, in Yakima, Wash. Gutierrez has worked with Johnson Orchards for more than 30 years with his brothers and nephews. (JOVELLE TAMAYO/Yakima Herald-Republic)

Israel Gutierrez, left, picks pears at Johnson Orchards with his brother, Roberto, on Wednesday, Sept. 6, 2017, in Yakima, Wash. The brothers have worked with the Johnson Orchards family for more than 20 years, alongside other relatives. (JOVELLE TAMAYO/Yakima Herald-Republic)

Any Washingtonian worth their salt could tell you that those six things arguably are what puts the Evergreen State on the map. But is that list missing something? Take a second to think about it. Got your answer?

If you said “pears,” (and would have said that even if you hadn’t read the headline), congratulations — you belong to the super-breed of Washingtonians who know and care that Washington state is the leading producer of pears in the nation.

In fact, Washington and Oregon together grow roughly 86 percent on the nation’s pears — a fact more residents should know.

Kevin Moffitt of the Portland-based Pear Bureau Northwest shared some professional insight into the hotly debated question about why more people aren’t properly respectful of the pear: It’s simple, they’re bad at picking pears and therefore don’t eat them. That leads to a sort of domino effect — they don’t care about them and don’t pay attention to them.

“People don’t understand how to tell when they’re ripe,” he said. “For example, if you take an Anjou pear that’s not ripe and bite into it like an apple, it’s not gonna taste like much.” How sad.

But you probably don’t know much about Yakima’s role in supplying the nation with pears, so here are a few facts about Yakima’s pear harvest that you can rattle off at your next dinner party:

• The Yakima pear district is the third largest pear-growing district in the country, with only the Wenatchee and Hood River, Ore., pear districts growing more pears annually.

• Pear yields are measured in units of 44-pound boxes and typically divided into two categories: Bartlett and winter pears, such as Anjou or Bosc. According to this year’s estimates, Yakima is expected to grow 604,000 boxes of Bartlett pears, and 1.4 million boxes of winter pears. If you convert those estimates to tons, Yakima is estimated to grow over 13,000 tons of Bartlett pears and nearly 40,000 tons of winter pears, which is down from last year’s harvest.

• Moffitt said that, typically, the weight of two pears equal 1 pound. That means if Yakima grows 604,000 boxes of Bartletts and 1.4 million boxes of winter pears weighing 44 pounds each, the Valley will grow approximately 53 million Bartlett pears and 123 million winter pears this year.

• If for some reason, we wanted to consume our own pear crop this year, each person in Yakima would have to eat 590 Bartlett pears and 1,373 winter pears to do so.

• This year’s harvest started a week later than normal, and the pears being picked are smaller than average (which may contribute to this year’s lower tonnage, since more pears fit into fewer boxes). Moffitt said this can be attributed to the extreme weather conditions Yakima saw in the winter and summer months. Moffitt speculates that the Bartlett harvest across the region is over, and that the winter pear harvest will start soon.

• Several varieties of pear are grown in the Yakima pear district: among them, Green Anjous, Boscs, Comice, Red Anjous, Concordes, Seckels and Forelles.