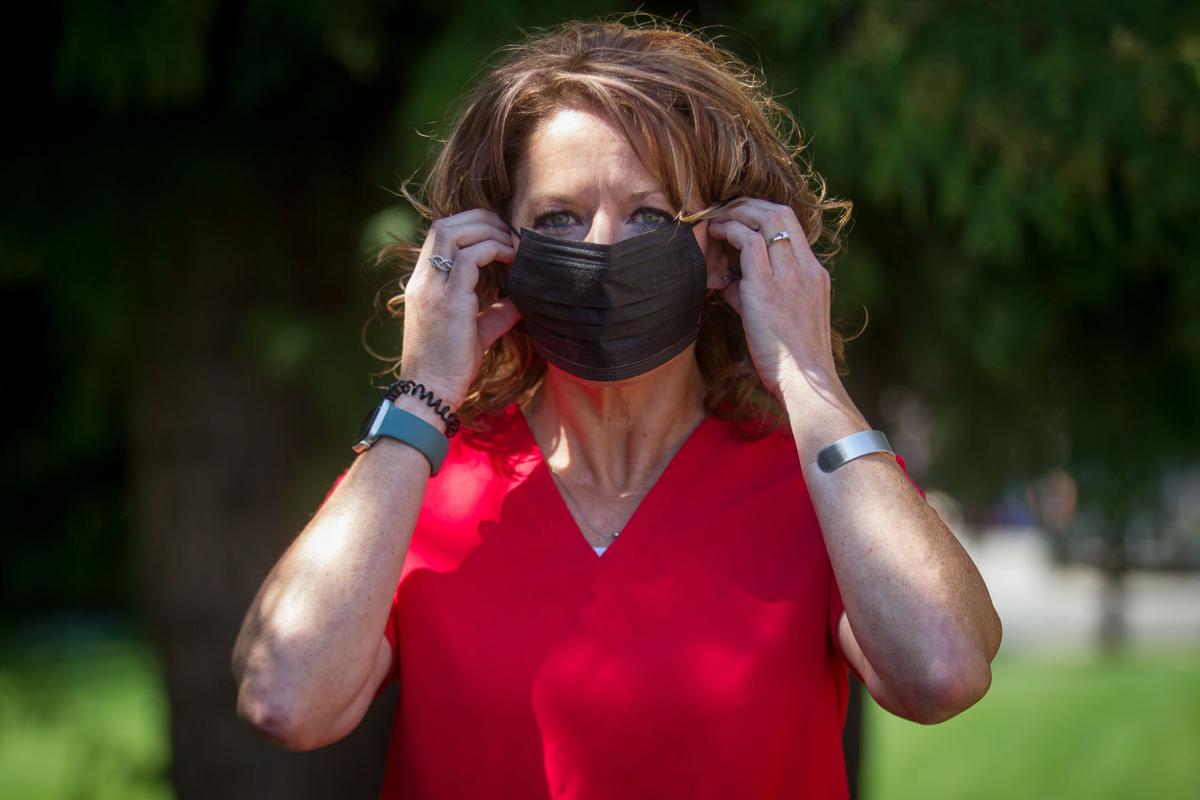 Becky Ross, an intensive care unit nurse at Yakima Valley Memorial hospital, places a medical mask on her face Wednesday, Sept. 1, 2021, outside of the hospital in Yakima, Wash. 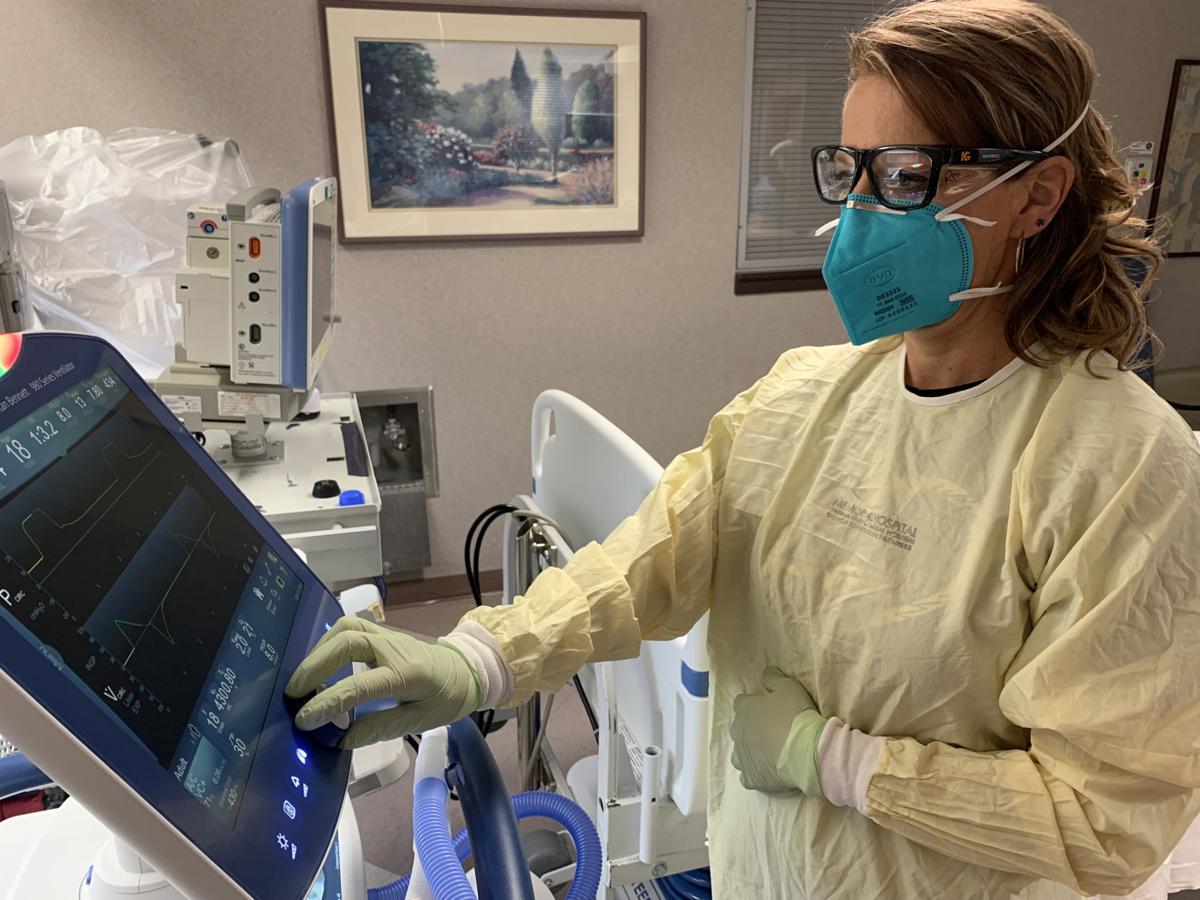 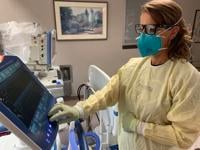 Becky Ross, an intensive care unit (ICU) nurse at Yakima Valley Memorial hospital, demonstrates how she checks a patient’s monitor inside the ICU at the hospital in Yakima, Wash. 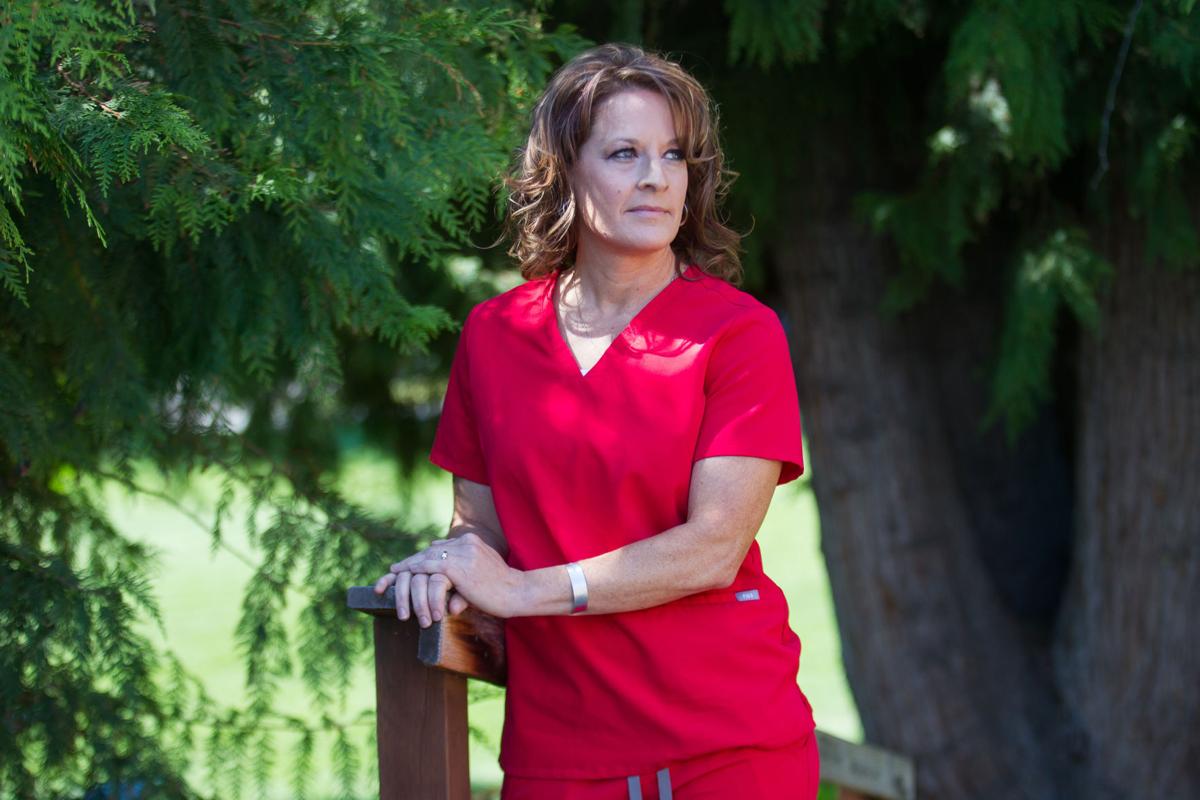 Becky Ross, an intensive care unit nurse at Yakima Valley Memorial hospital, poses for a portrait Wednesday, Sept. 1, 2021, outside of the hospital in Yakima, Wash.

Becky Ross, an intensive care unit nurse at Yakima Valley Memorial hospital, places a medical mask on her face Wednesday, Sept. 1, 2021, outside of the hospital in Yakima, Wash.

Becky Ross, an intensive care unit (ICU) nurse at Yakima Valley Memorial hospital, demonstrates how she checks a patient’s monitor inside the ICU at the hospital in Yakima, Wash.

Becky Ross, an intensive care unit nurse at Yakima Valley Memorial hospital, poses for a portrait Wednesday, Sept. 1, 2021, outside of the hospital in Yakima, Wash.

Yakima nurse Becky Ross has always been interested in helping people, but no matter how hard health care staff work, not everyone who gets sick pulls through.

“I have been a nurse for 15 years, and I’ve seen more death in this last year and a half than I have in all of my other 15 years combined,” she said.

Ross works in the telemetry unit and the intensive care unit at Yakima Valley Memorial Hospital, where she frequently cares for COVID-19 patients.

In the past few weeks, local hospitals have been full or nearly full as cases climb because of the highly contagious delta variant. As of Friday, 60 people with COVID were hospitalized in the county’s three hospitals, with 70 hospitalized on Sept. 9, the highest it’s been during the pandemic. At Memorial, roughly 25% of all patients have been COVID positive.

The daily grind of the pandemic, including long hours, high patient counts and staffing shortages have taken a toll on local nurses.

“It’s been taxing and trying and sometimes it just kind of feels like it sucks the soul right out of you,” Ross said.

For Ross, a normal day on the job consists of donning a battle suit of personal protective equipment before caring for and talking with patients.

Julia Barcott is an ICU nurse at Astria Toppenish Hospital. She has worked there for about three years but been in the field for 25. She said she has never seen the hospital so busy.

She said that since ICU nurses spend so much time with a limited number of patients and their families, they grow close to them.

“It is very physically, and extremely emotionally exhausting,” Barcott said. “It’s gotten much worse because we have very young people — and sometimes multiple family members — and you know it’s heartbreaking to see people suffering.”

Karen Arreola is also a nurse at Memorial. She works in the oncology and telemetry departments and cares for COVID patients. She said these days, each nurse is caring for more patients than normal, something hospital workers in other states have also had to do.

Adding to the strain on nurses is a staffing shortage, due partly to staff members who must quarantine after COVID exposure or contraction.

The number of staff out of work can fluctuate on a given day. As of Thursday, Memorial had 75 staff members out for COVID-related reasons, 24 of them nurses or nursing assistants, hospital spokesperson Bridget Turrell said in an email.

Arreola, who has worked at Memorial for nine years, said the shortage existed before the pandemic as well. It mirrors nursing shortages in many other states that also pre-date the pandemic.

All three nurses said that they and other staff have had to pick up extra shifts to cover for some of the staffing holes.

“Everybody on my unit has really stepped up,” Ross said.

Memorial leadership has reassigned staff members into patient care roles as appropriate in past weeks to meet demand.

The stress of the pandemic has led to some nurses leaving or considering leaving the field. In the summer of 2020, the Washington Center for Nursing surveyed more than 400 state nurses. Of the respondents, 42% said that they had considered leaving nursing that year or had already made plans to do so.

Nearly 70% of respondents also reported moderate or severe staffing shortages at their hospitals during the pandemic.

All three nurses said they have thought about leaving nursing during the pandemic.

“Sometimes I feel like our mental health is definitely being challenged,” Arreola said. “I think we’re also wondering is this the career for us.”

Arreola said her colleagues motivate her to stay.

“I really just don’t want to leave my colleagues at this,” she said. “I feel like we’re in this together. So, I’m just trying to stick through it.”

Barcott also said that her colleagues and the support they offer are some of the reasons why she has not left the field.

“You know I’d be lying if I said I hadn’t thought of that before, but I love nursing. I love what I do,” she said.

Ross said that getting to see patients overcome the health issues that landed them in the hospital help remind her why she became a nurse.

She remembered the time that a visitor came into see a dying patient. The man asked if she remembered him then told her that he was in the hospital for over a week about a year ago where Ross had looked after him.

Ross recalled him calling her and the other nurses “angels,” and saying that they saved his life.

Still, she said that it’s often painful getting close to patients.

“Every time somebody dies, it just kind of tears a piece of you apart with it,” Ross said.

She said she turns to her coworkers for support in dealing with the toll of the pandemic and uses exercise as a way to relieve stress. Arreola said that she tries not to think about work during her off hours.

The two said that the pandemic has tested nurses’ strength, but also shown them what they are capable of.

“No matter how hard the day can seem at that moment, at the end of the day, we get through another shift,” Arreola said. “I think that’s really the most rewarding because this really has pushed us maybe to our limit or over our limit for some.”

Barcott said seeing how staff members have reached out and supported each other makes her hopeful. Like Ross, she has also heard from former patients. Occasionally someone will come in for a minor procedure who she recognized from earlier in the pandemic.

“And that is so joyous, because so many times we never know what happens to people, especially if they’re sent out somewhere,” Barcott said. “And to actually have a couple of them come in and they have survived and they’re doing better, that makes it all worthwhile for me.”

Ross said she finds it frustrating when misinformation spreads in the community. She no longer reads comments on Facebook and avoids large crowds.

Barcott said community support is necessary for this pandemic to end.

“We can’t do this by ourselves and the one thing — or two things — they can do right now is to get vaccinated, and to wear a mask when they’re in public,” she said.

Arreola said that nurses just want to feel appreciated for the work they do keeping people healthy, especially during a pandemic.

“All I can say really is just do your part,” she said. “Help us get through this.”

The Initial pandemic was involving all of us. Currently we have a pandemic of the anti vaxxers, anti maskers , anti science, anti common sense and narcissistic immature . Shame on you. This assault on our health care community that you depend on could have been minimized.