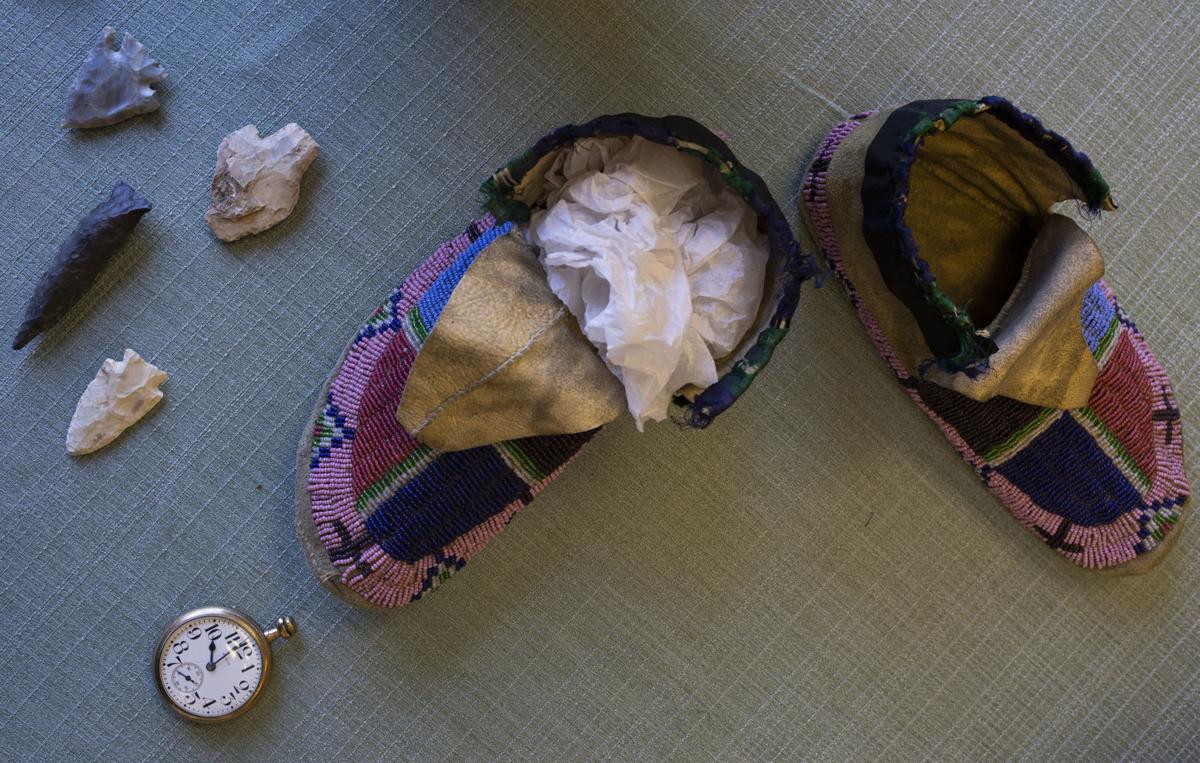 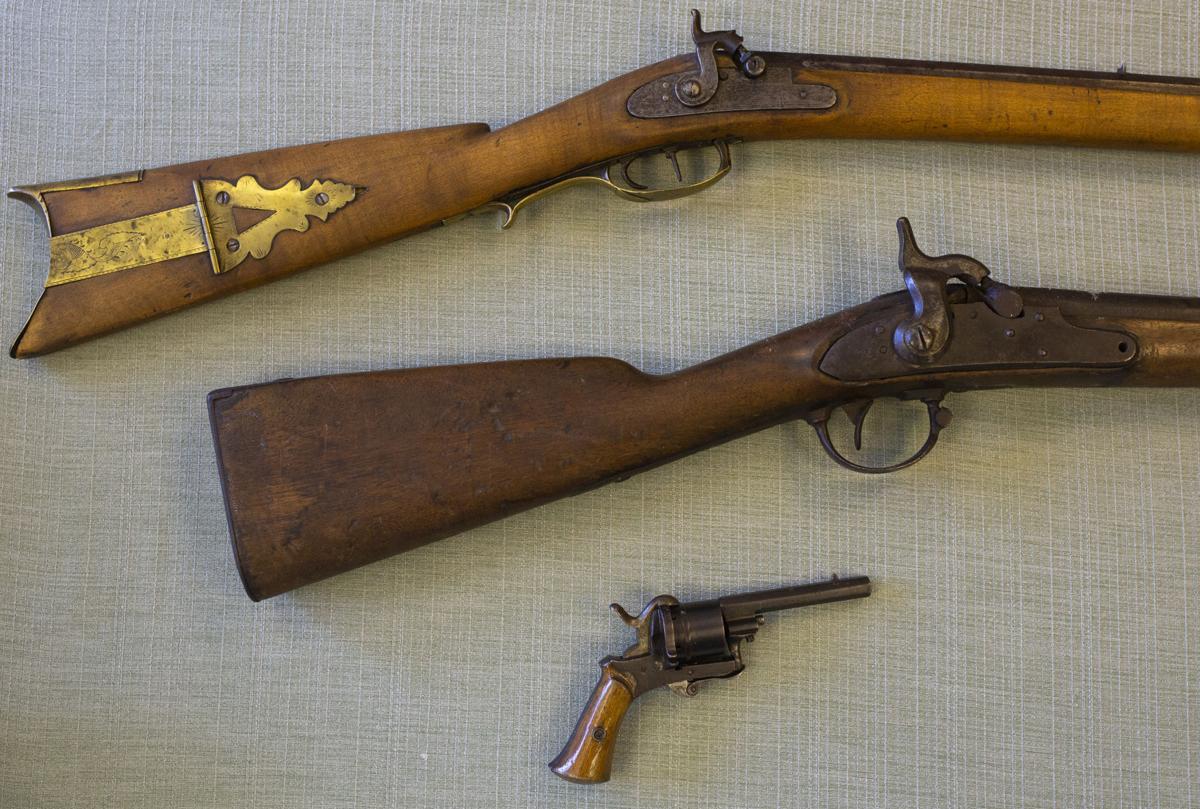 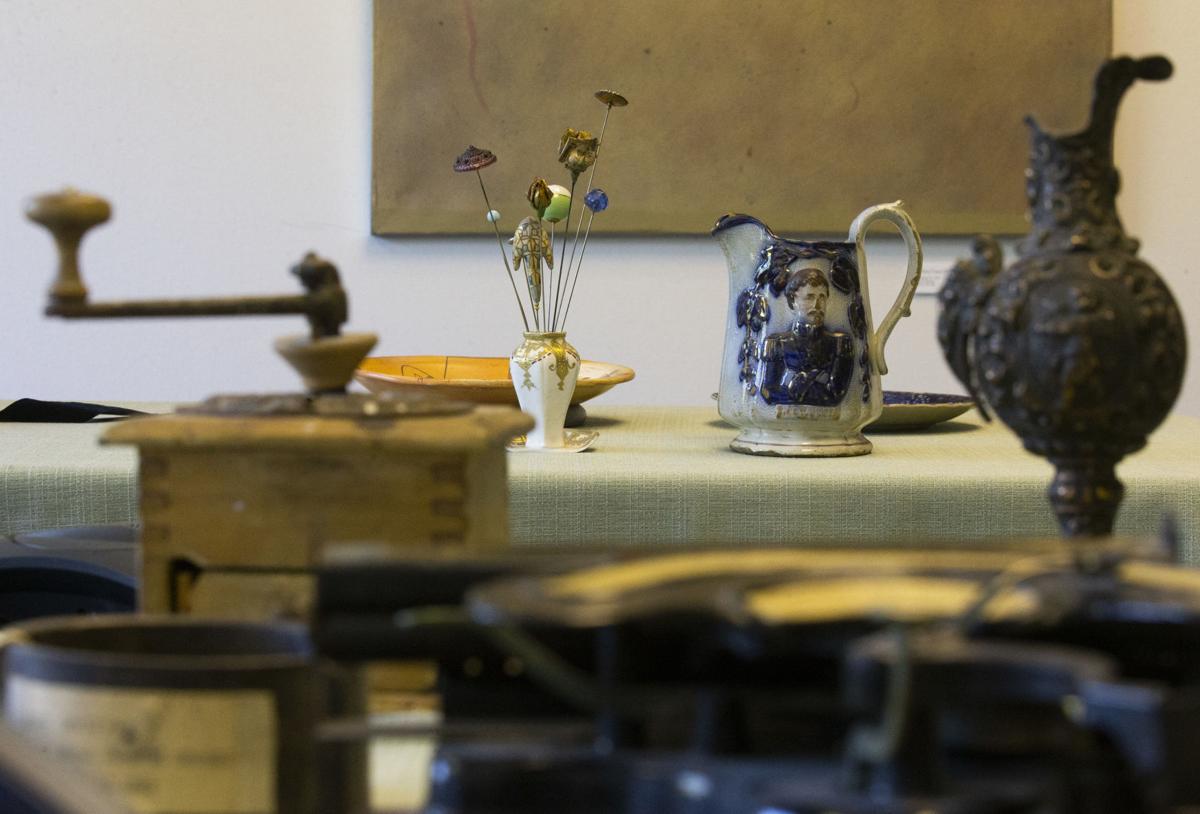 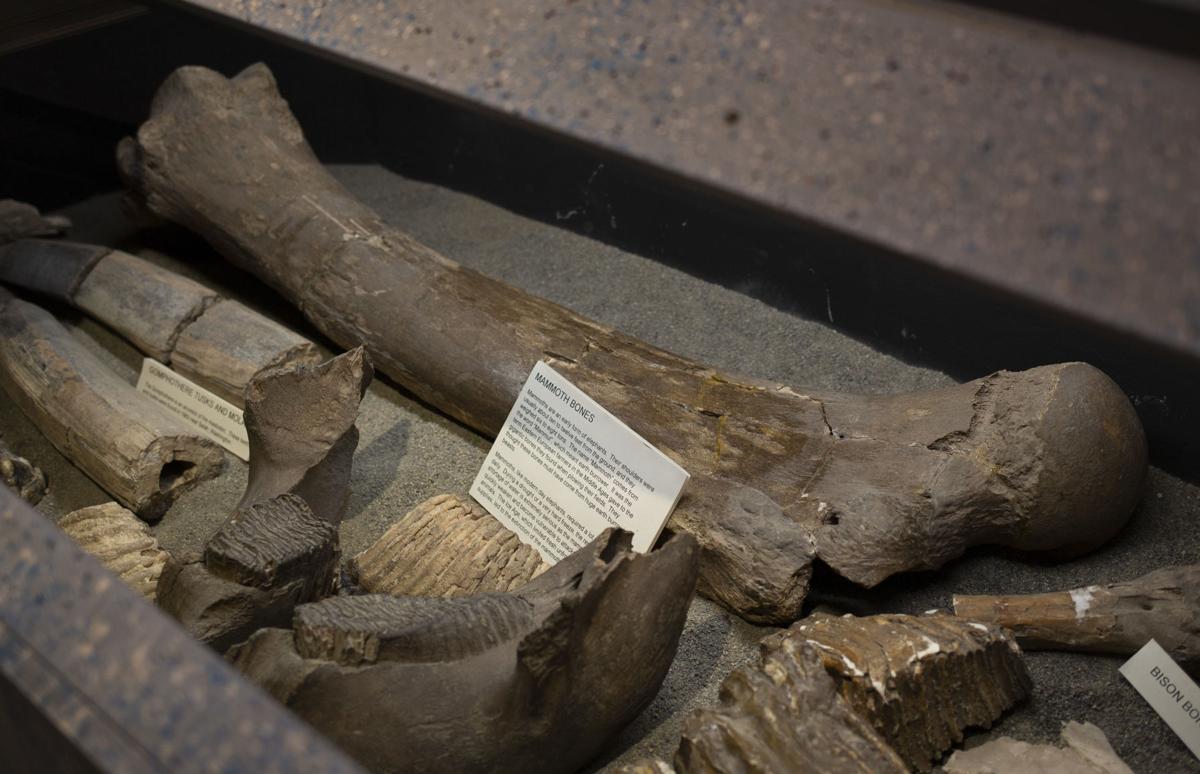 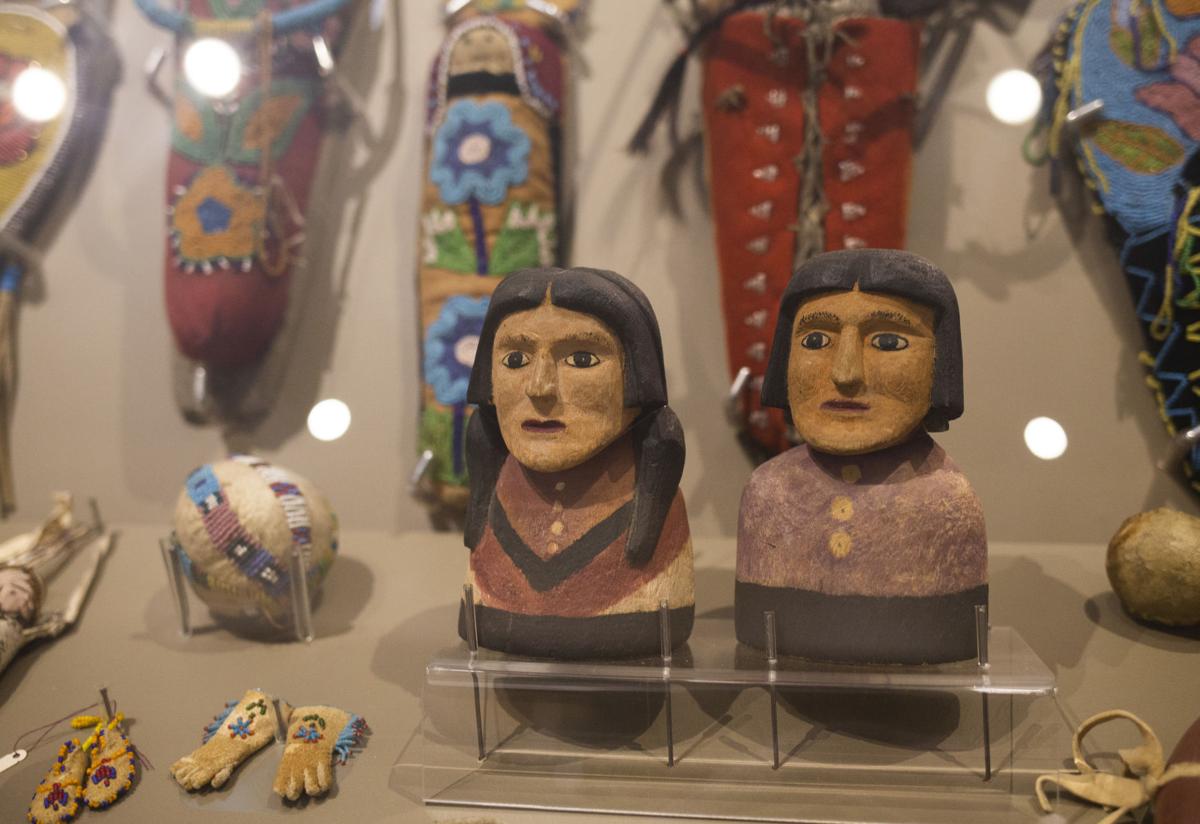 Figurines carved from balsa wood depicting a Hopi man and a Hopi woman are displayed at the Yakima Valley Museum Wednesday, April 21, 2021, in Yakima, Wash. The figurines are two of many items on loan to the museum. 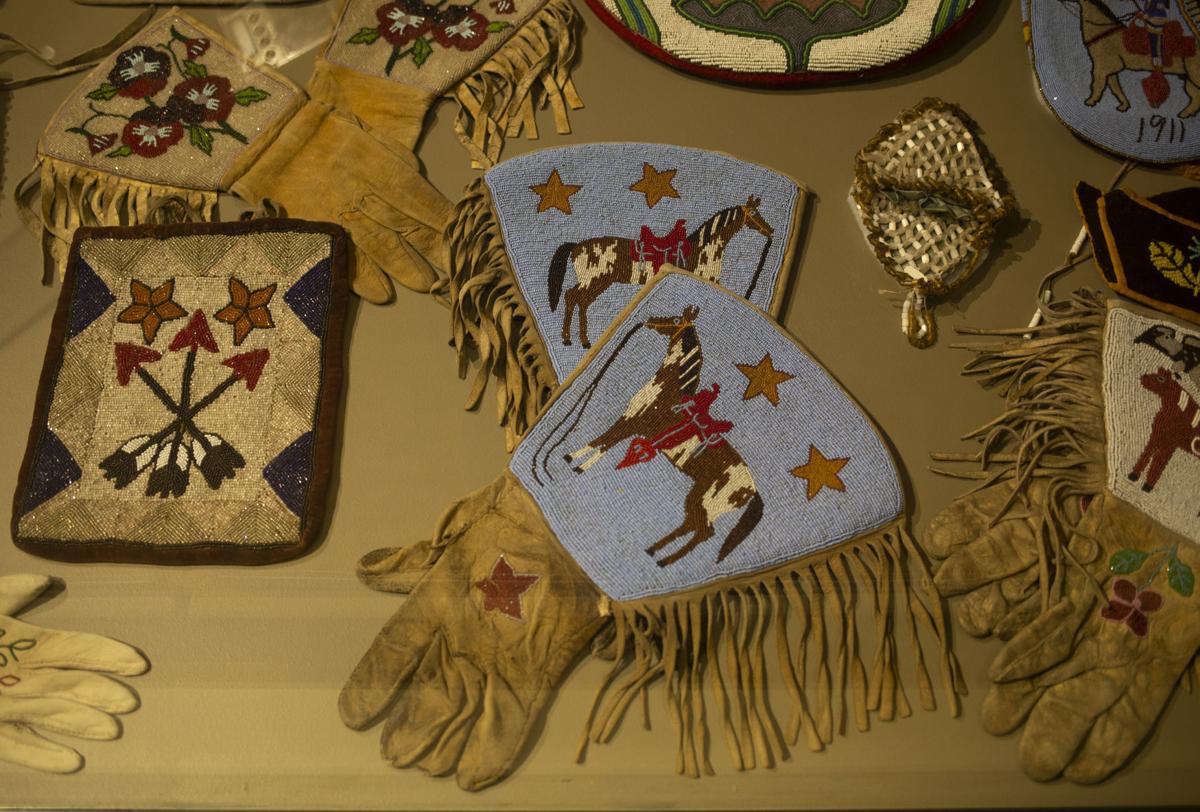 A pair of gauntlets on loan to the Yakima Valley Museum sit among other items in a display case Wednesday, April 21, 2021, in Yakima, Wash. 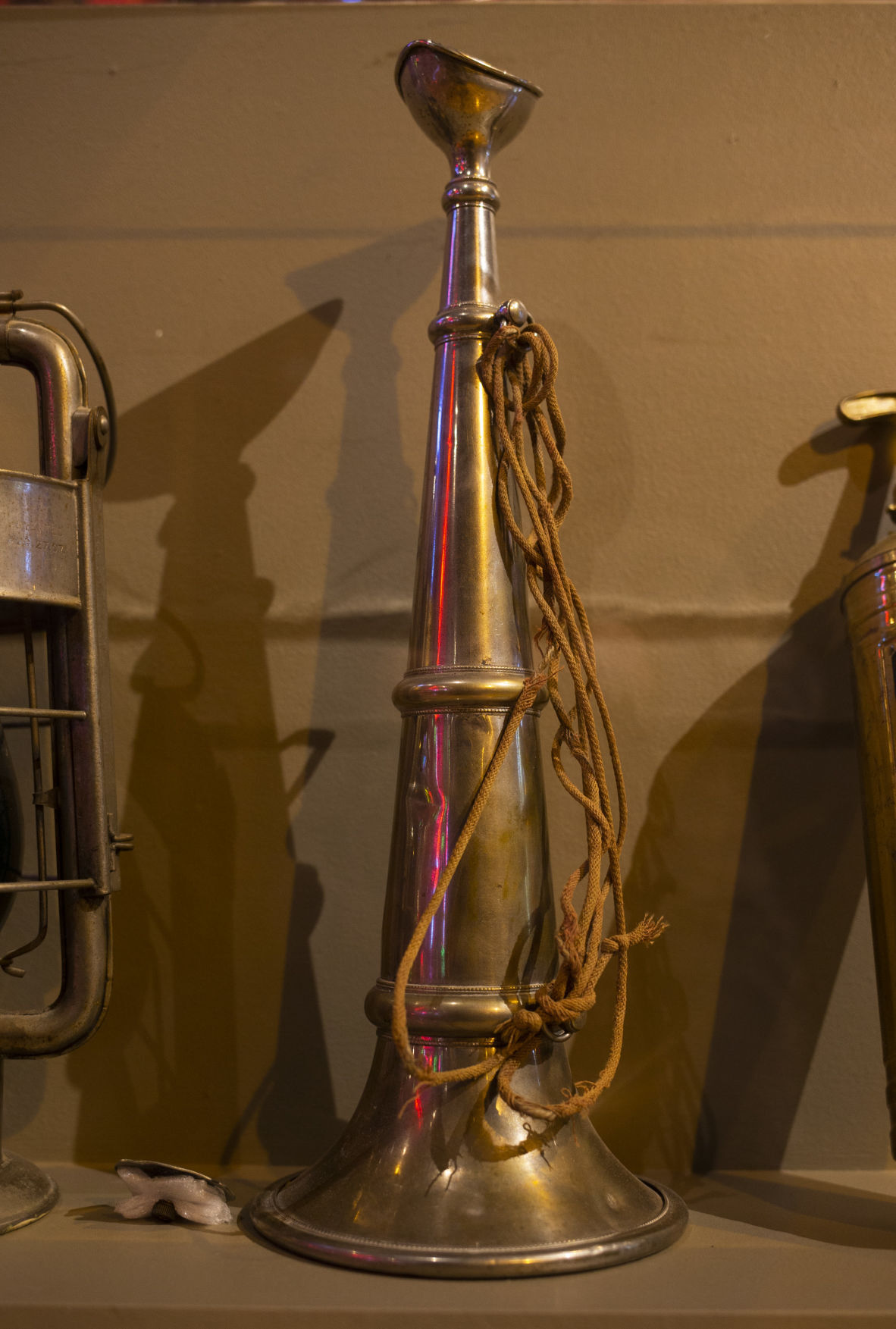 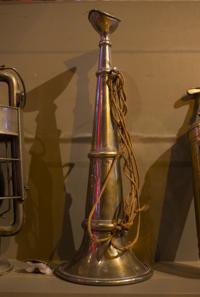 A speaking trumpet used by Yakima Fire Department is one of many loaned items on display at the Yakima Valley Museum Wednesday, April 21, 2021, in Yakima, Wash.

Figurines carved from balsa wood depicting a Hopi man and a Hopi woman are displayed at the Yakima Valley Museum Wednesday, April 21, 2021, in Yakima, Wash. The figurines are two of many items on loan to the museum.

A pair of gauntlets on loan to the Yakima Valley Museum sit among other items in a display case Wednesday, April 21, 2021, in Yakima, Wash.

A speaking trumpet used by Yakima Fire Department is one of many loaned items on display at the Yakima Valley Museum Wednesday, April 21, 2021, in Yakima, Wash.

In 1963, Churchill E. Silvers loaned a mammoth thigh bone to the Yakima Valley Museum. Nearly as long and wide as a petite human leg, the ancient bone is grooved on one end with the ball for the socket on the other.

The bone, which is on display in the lower level Time Tunnel area of the building, is among 321 objects loaned to the museum from 1950-1966. They’re considered long-overdue loans and Mike Siebol, curator of collections for the museum, is working with its collections committee on an ambitious project to return them or convert the loans as part of the permanent collection.

Though those objects comprise less than 1% of the museum’s total collection of 48,228 objects, it’s a bigger challenge than it sounds. Contacting the 120 lenders as required by state law is a big research project in itself. Adding to the challenge is that most married women who loaned items to the museum in that time used their husband’s names instead of their own.

“I have not found anybody living. I’ve contacted grandchildren of the original lenders,” Siebol said. “I’ve used city directories and the Find A Grave website.”

There’s also a more recent collection of overdue loans — 34 pieces of artwork from the now-defunct Allied Arts of the Yakima Valley organization. It dissolved in October 2016 after its building, which stood at today’s Gilbert Park, was condemned by the city in early 2014 and later demolished.

“Artists were lending the pieces” to Allied Arts, Siebol said. The museum originally took in 55 pieces of artwork from the Allied Arts collection and returned 21 of them in April 2014.

The museum wants to convert the Allied Arts loan to be a part of its permanent collection but will return pieces as requested by the artists. And if they or relatives of those who made early loans want to donate them to the museum, they can.

Peter Arnold, executive director of the museum, asked museum board leaders to revitalize the museum’s committees. Among them is the collections committee. Every donation to the museum goes through that committee and must fit the museum’s mission, Siebol said.

“This is quite the project to tackle, but I am glad that the newly formed collection committee has decided that this is the right thing to do,” Siebol said. “The collections committee has made this a priority for this year and probably the year to come.”

State law concerning unclaimed property held by a museum or historical society requires they put notifications in the newspaper for two consecutive weeks in an effort to contact donors or their relatives. After 90 days the objects are considered abandoned and the museum can take them into the permanent collection.

“It will probably be in segments,” Siebol said of the legal ads, which will likely run in the Yakima Herald-Republic next month. The ads will include the original lender’s name, the lender’s last known address and a short description of each object.

The loaned objects run the gamut of animal and human existence in the Yakima Valley. Several of the loaned items are on display like the mammoth thigh bone. Others include a fire department “speaking trumpet” and a penny-

farthing, which is a high-wheel bicycle.

Earlier this week, Siebol also pulled several of the early loans out of storage. They included a circa-1750 pottery pitcher brought over from Scotland in 1850, baskets made by Yakama and other Indigenous artists and moccasins donated by Mrs. Francis Bacon in 1950.

They are among items loaned by the Yakima chapter of the Daughters of the Pioneers of Washington, which started a museum in the basement of City Hall in 1951, Siebol said. The museum rooms opened on Feb. 20, 1951.

The Yakima Valley Museum was incorporated in 1952, with the core of today’s structure — designed by John Villesvik and Maurice Smith — built in 1957. Members of the Yakima chapter of the Daughters of the Pioneers of Washington loaned the museum their 167 objects, which comprised its earliest exhibits.

“Loan paperwork at that time was very rudimentary and did not require a date that the loan was to expire. There was also no effort to acquire the mailing address of the individual loaning the object,” Siebol said in a description of the loan return project.

An address requirement was added to donation and loan forms in 1967. Also starting that year, museum staff would take loans only for a certain amount of time.

Long-overdue loan items are part of just about every collection in the museum, Siebol said. But they don’t belong to the museum.

“Because all of these items are on loan, they’re in limbo. ... They’re not really ours and if the families want them back, that’s fantastic,” he said.

If you know a relative loaned an object or objects from 1950 to 1966 to the Yakima Valley Museum or its predecessor, Mike Siebol wants to hear from you.

That also goes for the artists who loaned 34 pieces of art to the Allied Arts of the Yakima Valley organization before it disbanded in 2016.

Objects and artwork will be returned or may be donated to the museum. The artists with pieces loaned to Allied Arts are:

“An exhibition of spectacular fashion with creations spanning a spectrum of styles,” writes Heath Lambe, curator of exhibits at the Yakima Val…