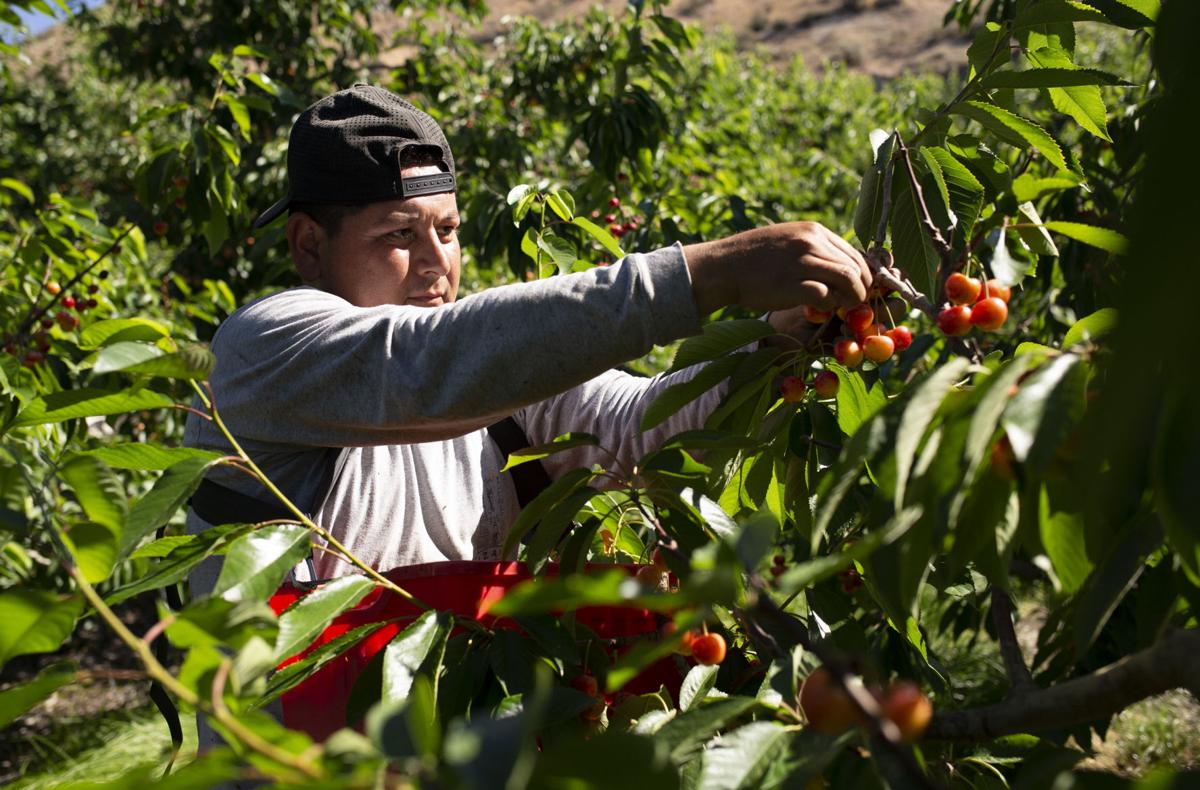 Rodolfo Valdivia picks cherries in an Allan Brothers Fruit orchard around 9 a.m. Saturday, June 26, 2021 in Naches, Wash. Crews get off around 1:30 p.m. to avoid the hottest part of the day. 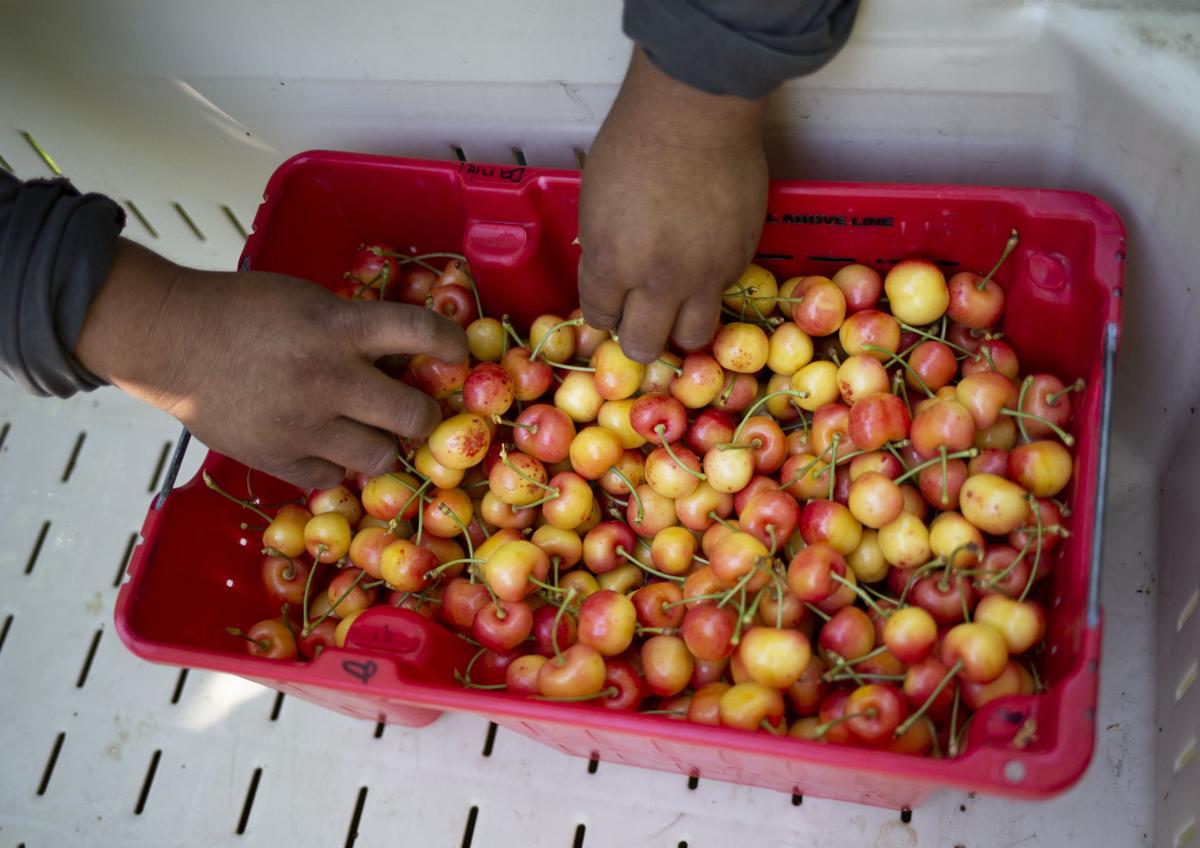 Leonel Soliz checks a basket of cherries for quality shortly after they were picked in an Allan Brothers Fruit orchard Saturday, June 26, 2021 in Naches, Wash. 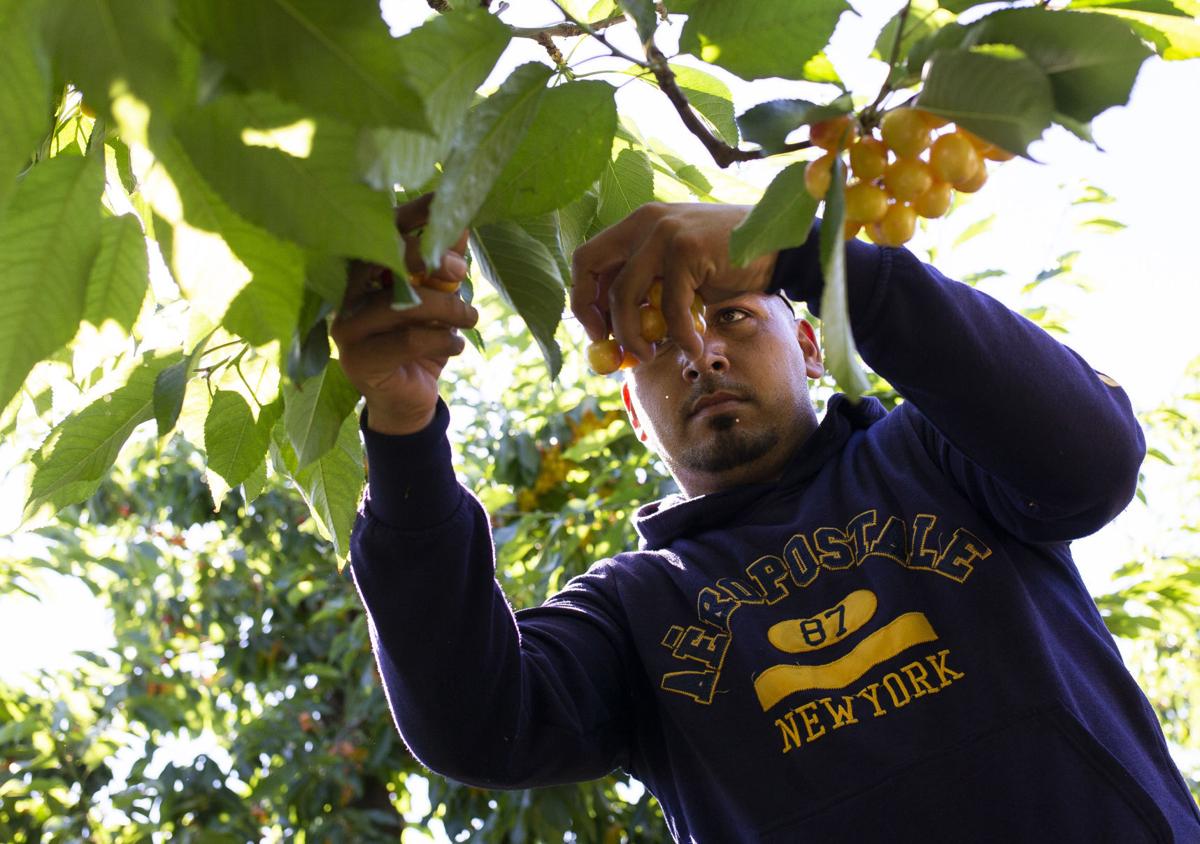 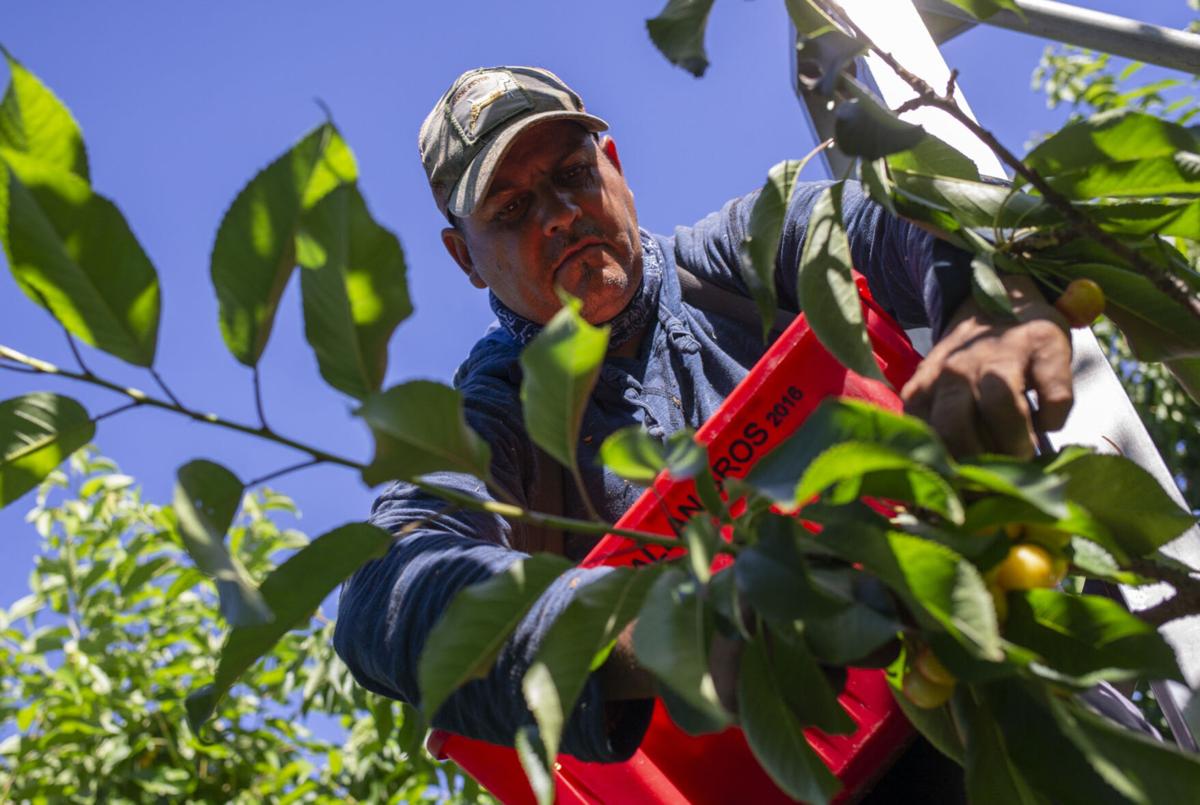 Rodolfo Valdivia picks cherries in an Allan Brothers Fruit orchard around 9 a.m. Saturday, June 26, 2021 in Naches, Wash. Crews get off around 1:30 p.m. to avoid the hottest part of the day.

Leonel Soliz checks a basket of cherries for quality shortly after they were picked in an Allan Brothers Fruit orchard Saturday, June 26, 2021 in Naches, Wash.

Travis Allan sees himself and his crews in a race against nature.

Allan, with Allan Bros. in Naches, has crews trying to harvest as many cherries from vulnerable parts of his orchards before the current heat wave does too much damage. Right now, his crews, who start work at 5 a.m. and stop around 1:30 p.m. when the weather gets too hot, are concentrating in areas most exposed to the sun’s rays.

“After two days (of excessive heat), it’s an oven, a blow dryer over a sack of water,” Allan said.

Orchardists in Central Washington are trying to save as much of the cherry crop as possible, using canopies, deploying sprinklers and sending out workers in the night to harvest cherries.

Farm labor advocates are hoping that growers and their labor contractors are making the health of the workers picking the fruit as much a priority as the fruit itself.

A heat wave has settled into the Pacific Northwest due to a high-pressure system, according to the National Weather Service. Temperatures are expected to exceed 100 degrees for the coming week, with a predicted high near 115 degrees on Tuesday, five degrees higher than the all-time record set in 1971.

Currently, cherry growers are moving 500,000 boxes a day, said B.J. Thurlby, president of the Washington State Fruit Commission. The cherries so far appear to have good color and sugar, he said.

But this heat wave is a new experience, Thurlby said.

“We have not been in these waters before,” Thurlby said. While the region experienced a heat wave in 2017, and the cherry crop rode it out, Thurby said it was not of the same intensity.

If the cherries get too hot, they will sunburn and dry out, Thurlby and others said.

Allan believes the heat wave could render as much as 20 to 40% of the fruit on a tree as cullage.

But there are strategies for taking the edge off the heat for the fruit.

Sprinkler systems under cherry trees can, through evaporation, knock off as much as 10-15 degrees from the air temperature around the fruit, Thurlby said.

But it’s not an entirely foolproof solution.

Ric Valicoff, with Valicoff Fruit Co., said sprinklers also create humidity, which can cause mildew to grow inside the clusters of fruit, so it can’t be sold.

Plus, it also requires a lot of water, which can be a scarce commodity, particularly for water users with junior rights.

“We’re running through our water budget pretty fast,” Valicoff said. “I’m going to run out of my entitlement.”

Shade netting is also another strategy that orchardists use to combat heat and birds. The large polyethylene sheets, which from a distance can make an orchard look like a building, can knock down temperatures 10-15 degrees, Thurlby said, as well as prevent sunburn on fruit.

There is also a drive to get the fruit that is most vulnerable off the tree as soon as possible. Allan said he’s concentrating first on the trees that are near the ends of rows, as well as the tops where the cherries are most exposed to the heat and sun.

The fruit lower on the trees or on trees more in the middle of the orchard have more protection from the leaf canopy that can block sunlight and hold humidity.

But a representative of the United Farm Workers union worries about the condition of the laborers who are trying to harvest the cherries in the heat.

While she understands the need to get as much of the cherries harvested as possible, Strater said it is also important to protect workers from the effects of high heat. She said serious dehydration can damage the heart and kidneys, and even with water breaks, the heat makes it difficult to remain hydrated while working.

Rules vary from state to state, Strater said, and that while an orchard owner may want to keep their workers protected, that message may not get through to either the supervisors or the contractors providing the workers.

“I hope they will be checking with their supervisors and contractors,” Strater said.

Allan said his crews are starting work at 5 a.m. and picking until around 1:30 p.m., avoiding the hottest parts of the day.

Thurlby said he’s heard of some orchardists bringing in lights and having workers start at 2 a.m., when the weather is relatively cooler and safer to work in.

Cherries may not be the only fruit in trouble. Valicoff said high heat also stresses apple trees, forcing them into “survival mode” where the trees shunt nutrients away from fruit, stunting the fruit’s growth.

He plans to check his apples with a paper tape placed around them that will break if the apple is growing.

A Yakima Valley weather record fell Sunday as the high temperature hit 109, which topped the June record set in 2015.