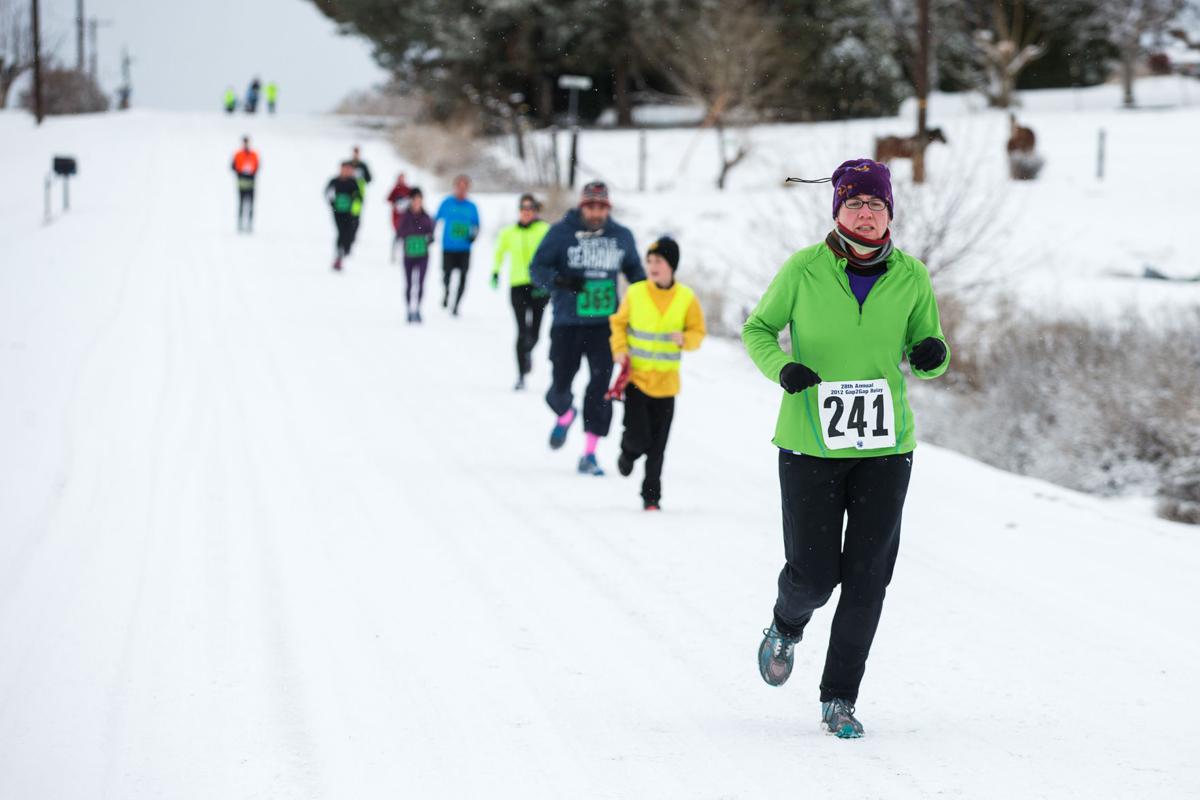 Trinda Stephenson runs along Duffield Road during the Winter Race Series No. 3 in Yakima, Wash. Sunday, Jan. 1, 2017. Stephenson, who logged more than 1,200 minutes of activity, had always liked to run, but she liked the challenge of doing something every day. (SHAWN GUST/Yakima Herald-Republic) 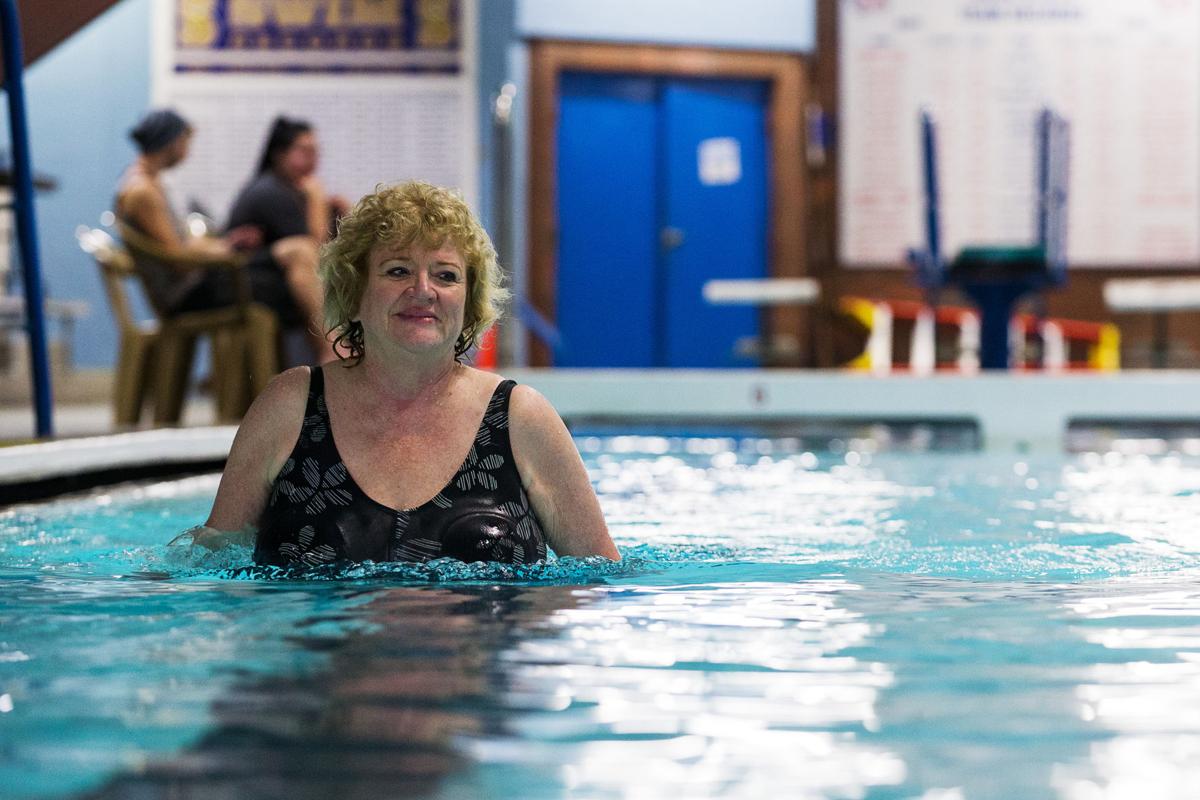 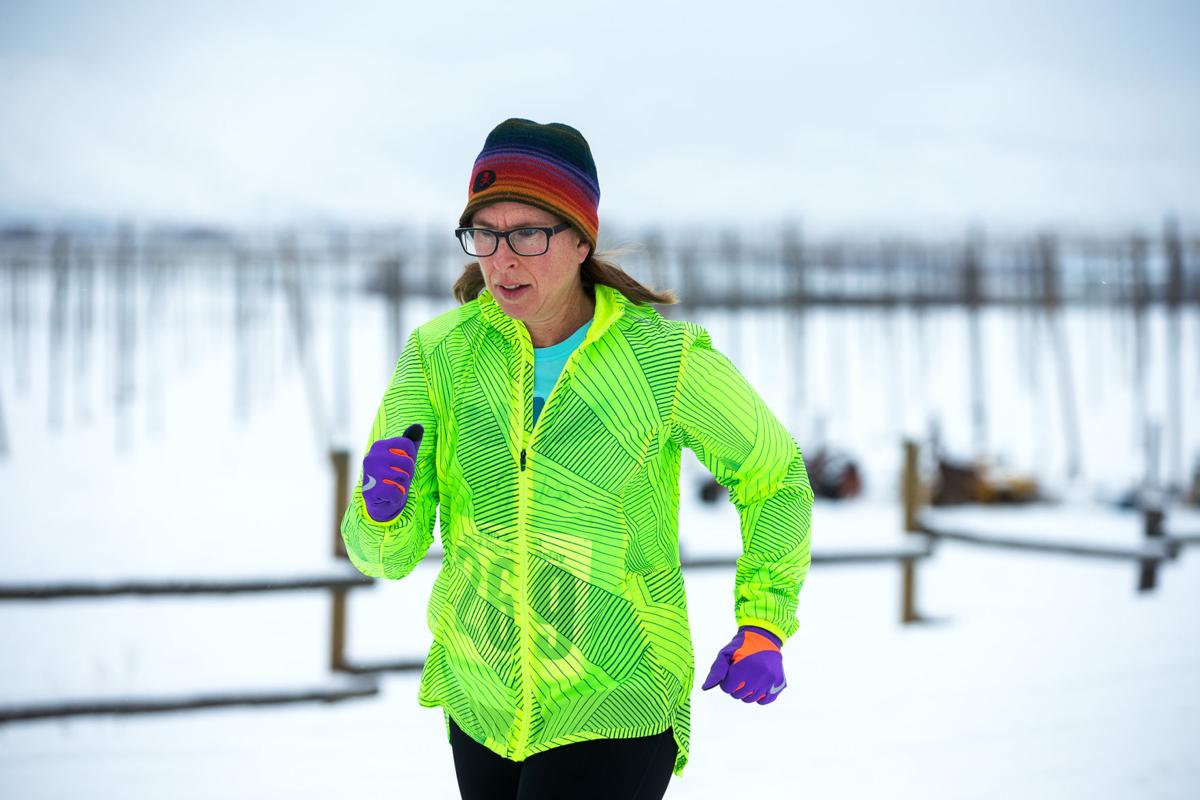 Lorrie Smith participates in the Winter Race Series No. 3 in Yakima, Wash. Sunday, Jan. 1, 2017. With more than 1,600 minutes charted in the challenge, Smith said that with the roads near her house icy, she ended up doing different activities, such as hiking on Cowiche Canyon, an activity she typically does in the summer. (SHAWN GUST/Yakima Herald-Republic)

Trinda Stephenson runs along Duffield Road during the Winter Race Series No. 3 in Yakima, Wash. Sunday, Jan. 1, 2017. Stephenson, who logged more than 1,200 minutes of activity, had always liked to run, but she liked the challenge of doing something every day. (SHAWN GUST/Yakima Herald-Republic)

Lorrie Smith participates in the Winter Race Series No. 3 in Yakima, Wash. Sunday, Jan. 1, 2017. With more than 1,600 minutes charted in the challenge, Smith said that with the roads near her house icy, she ended up doing different activities, such as hiking on Cowiche Canyon, an activity she typically does in the summer. (SHAWN GUST/Yakima Herald-Republic)

During the Yakima Herald-Republic’s Holiday Streakin’ Fitness Challenge, participants logged in nearly 2,500 hours of activity. They endured wintry weather and even a cold or two to meet the challenge’s objective — log in at least 10 minutes of daily activity for 25 days.

Moore than 70 people achieved that goal. Of those, more than 50 decided to keep the streak going during the 31 days of December.

Whether they completed the official challenge or not, nearly all participants took the opportunity to incorporate some activity during a season where it’s easy to forget keeping fit.

Now it’s 2017, and challenge participants are ready to face their fitness goals head-on now after developing a month-long exercise habit.

Reporter Mai Hoang, who coordinated the challenge, talked to several participants about their experience and their goals for the coming year.

‘It helped motivate me’

Ted Lowry, 58, said Mai’s story on how she maintained a yearlong running streak while balancing a career and parenthood inspired him.

“It helped motivate me to put off exercise until tomorrow less often,” he said.

Like many others, Ted had settled into a nighttime routine that included sitting in front of the television after dinner. He broke that habit to complete the challenge. “It’s been the most constantly active I’ve been in the dark months for a long time,” he said.

During one cross-country skiing trip, Ted and his wife came back to find their car battery was dead. They ended up skiing for another two hours until they found a couple willing to help jumpstart the car. The exercise was a silver lining in what is typically a major inconvenience.

Ted would like to keep the daily exercise streak going and hopes it will help him lose 7 pounds by April.

“(I realized) it’s not difficult to develop a new positive habit,” he said. “... And I got to amaze my friends by exercising outdoors in the winter.”

Pattie Johnson, a 63-year-old Yakima resident, has been going to the pool regularly, an activity she could do with her arthritis. The habit helped her lose 30 pounds last year.

Pattie decided to sign up for the holiday challenge over lunch with her friend Alicemarie Roper, also 63.

“We read about it in the paper,” she said. “We just decided to do it.”

While Pattie had established an exercise routine, the challenge helped her come up with new ways to stay active. She started incorporating other activities, such as doing sets of push-ups and sit-ups.

The accountability she received — namely through seeing participants post on Facebook — also provided motivation on the days she wasn’t able to swim. During snowy days when Pattie didn’t want to travel to the pool, she opted to go for a walk and shovel snow instead.

“(The challenge) pushed me to move more,” she said.

For Alicemarie, having her friend do the challenge with her offered the motivation needed to sign-up. Alicemarie has been undergoing chemotherapy for cancer and wanted to do the challenge to help increase her stamina and endurance.

“Because of chemo, cold bothered my hands and feet but (I bundled) up everyday. I felt motivated to increase my endurance a little every day,” she said.

Alicemarie completed some sort of physical activity all 31 days of last month and ultimately logged in more than 1,700 minutes. The challenge not only improved her endurance but also was good for her emotionally.

“This is the first time in almost 40 years here I have kept from being depressed in winter,” she said. “This challenge made me want to go out every day, several times a day and get my blood flowing. I feel wonderful mentally thanks to this.”

‘You can enjoy life’

Laurie Armstrong of Selah likes to exercise, but she loved the challenge’s premise of requiring an activity every day during December, especially with the holiday season.

Laurie, 71, made the daily habit stick by making sure to exercise first thing in the morning, usually on her treadmill or bike. She aimed for an hour each day, but some days only completed 15 minutes.

She also enjoyed seeing how others got their activity in — and she wants to watch the Wine County Crushers, the Yakima roller derby team, play sometime after seeing members post about their practices on the Holiday Streakin’ Challenge Facebook group.

Laurie also is evaluating how to mix up her exercise routine. For now, the plan is to find an exercise tape where she could work on strengthening her upper body.

Regardless of what she does, Armstrong wants to show the benefits of daily activity.

“Heart disease is big in our family. (Daily activity) keeps the cholesterol and glucose under control,” she said. “You can enjoy life, you don’t hurt, you can do anything you want and be happy about it.”

Motivated to do more

During one day of the Holiday Streakin’ Challenge, Giselle Casares found a way to get her 10 minutes in — she walked around the conference room at Ohana Mammography Center in Yakima where she works.

“When it’s too cold to walk outside, you improvise at work,” Giselle wrote on a video she posted on Instagram.

Giselle said she enjoyed logging her time each day. “To know I have a to-do item to log it in ... gave me the help to get the exercise in for the day,” she said.

Giselle also learned about her mother’s competitive streak. Her mother enjoyed logging in and seeing how much activity others were doing.

“She would try to beat me,” Giselle said. “She would see how many minutes other people got in. That motivated her to do more.”

Giselle did edge her mother out in total workout minutes, 650 to 597, but Giselle was more surprised she completed that many minutes.

“I didn’t think the 10 minutes wouldn’t make a difference, but in the end it did.”

Both Giselle and Estela want to continue the habit, and Giselle is looking for a program that would enable her to log in her activity time each day.

‘I had to be creative’

During the challenge, Lorrie Smith’s two children — 11 and 7 — were at home for Christmas break and the roads around her house were too icy for her usual neighborhood run.

Lorrie, 48, found a solution — she took her children to the Yakima Greenway for a walk. She got her exercise time and her children enjoyed some time at the playground after they finished walking.

“I knew I would do what it took to complete that goal,” she said about finishing the holiday challenge. “I had to be creative.”

Cultivating that creativity was exactly why Lorrie signed up for the challenge. “I just know that I have a tendency, especially when it’s icy and cold, to look for excuses not to exercise,” she said.

Since winter weather was no longer an excuse, Lorrie was open to other activities, such as hiking Cowiche Canyon, which she usually reserves for warmer months. She also enjoyed seeing what other participants were doing. Pattie’s posts on Facebook about going to the pool reminded Lorrie that was an option for her, as well.

Lorrie’s goal is to continue daily activity this year, even during her “rest” days — there is still a benefit in getting in an low-impact activity, such as a walk outside, on those days. She is also thinking about how she can take advantage of the winter months to train for a race, such as the Yakima River Canyon half-marathon in April.

Debbie Clapp is no stranger to fitness. She’s teaches aquatics classes at the Yakima Family YMCA. But this challenge was an opportunity to show her students — and herself — that she wasn’t just all talk about developing fitness habits.

During each day of the challenge, Debbie posted a photo of her exercising on Facebook. She often included a list of her planned exercises.

“I’ve have had quite a few people respond,” said Debbie, 38, who lives in Gleed. “The feedback has been good.”

Debbie said completing the challenge served as a springboard for her other goals in 2017. Now that she has the exercise routine down, she wants to work on another aspect of health. “My fitness has been awesome; now I need to work on my eating, as well,” she said.

Debbie would like to lose weight but believes it’s more important to work on maintaining healthy fitness and eating habits.

“Every time I try to focus on my weight, it hasn’t worked,” she said.

She hopes sticking to those habits will help her fulfill other key goals, including completing another half-marathon later this year and running 40 miles — 8 miles a day for 5 days — on the week of her 40th birthday in August 2018.

“I’m really optimistic and looking forward on concentrating on my health,” she said.

When I first moved to Yakima a decade ago, I was often asked why I decided to live here. Back then, the answer was easy — because I got a job …