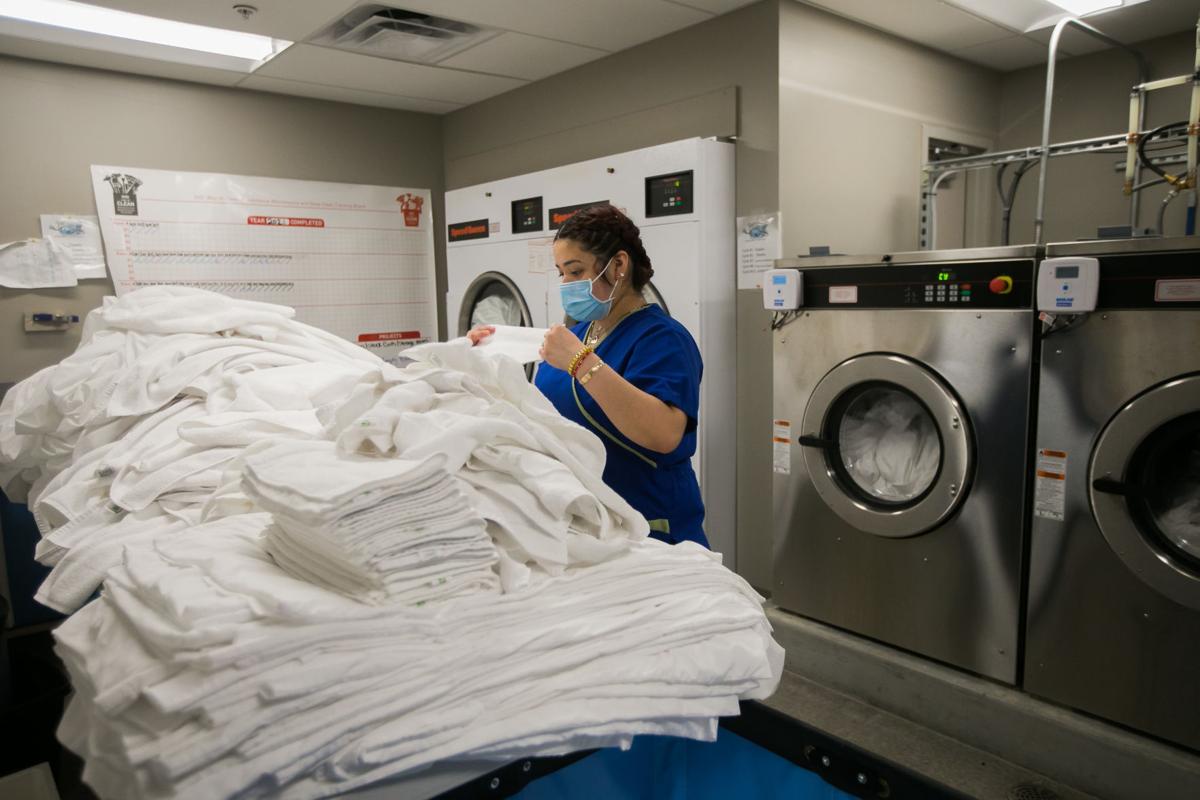 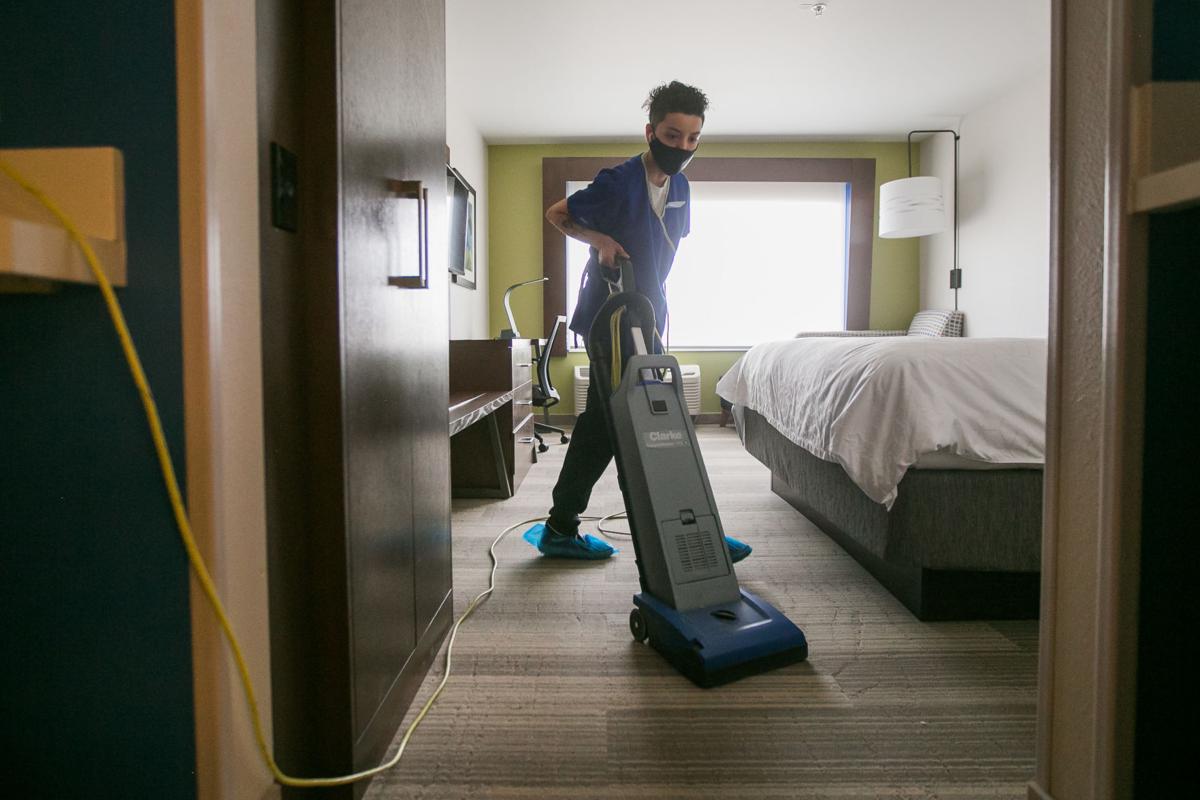 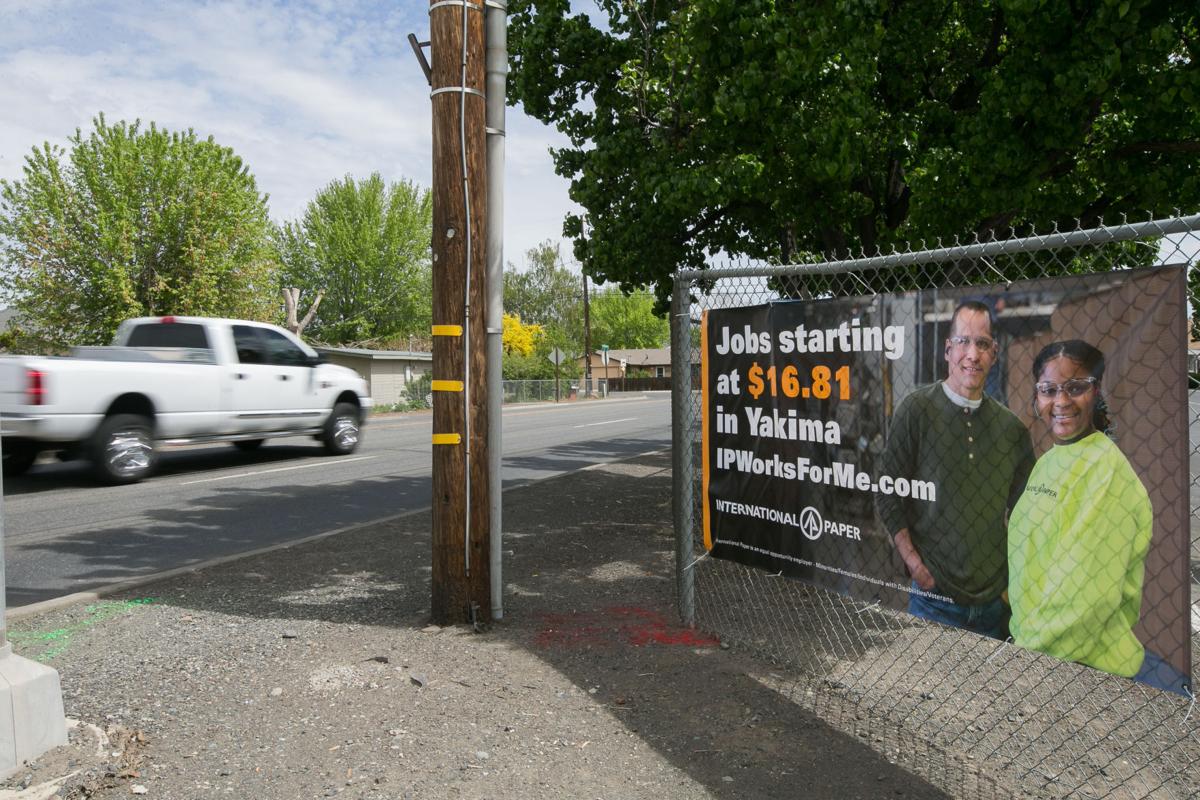 A job advertisement sign is shown outside of International Paper Wednesday, April 28, 2021, at 600 W. Ahtanum Road, in Union Gap, Wash. 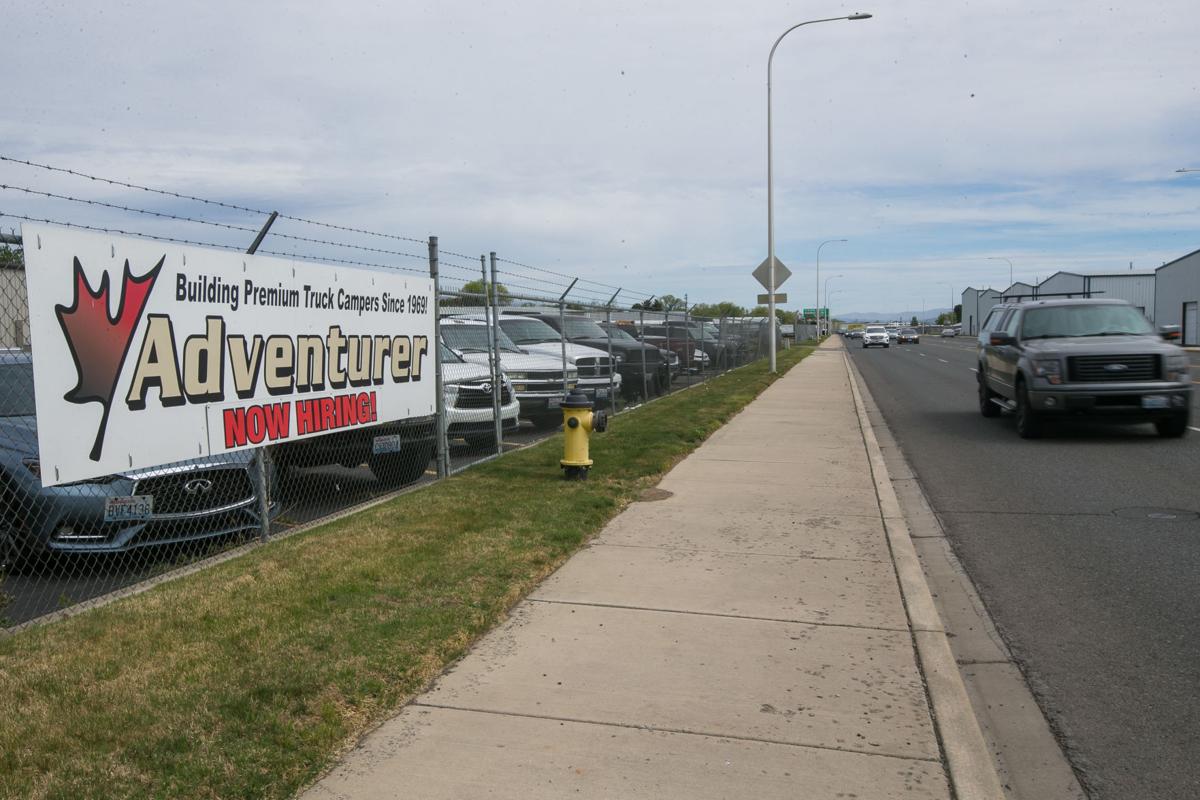 A “Now Hiring” sign for Adventurer Manufacturing is shown hanging on a fence near West Washington Avenue in Yakima, Wash., on Wednesday, April 28, 2021. 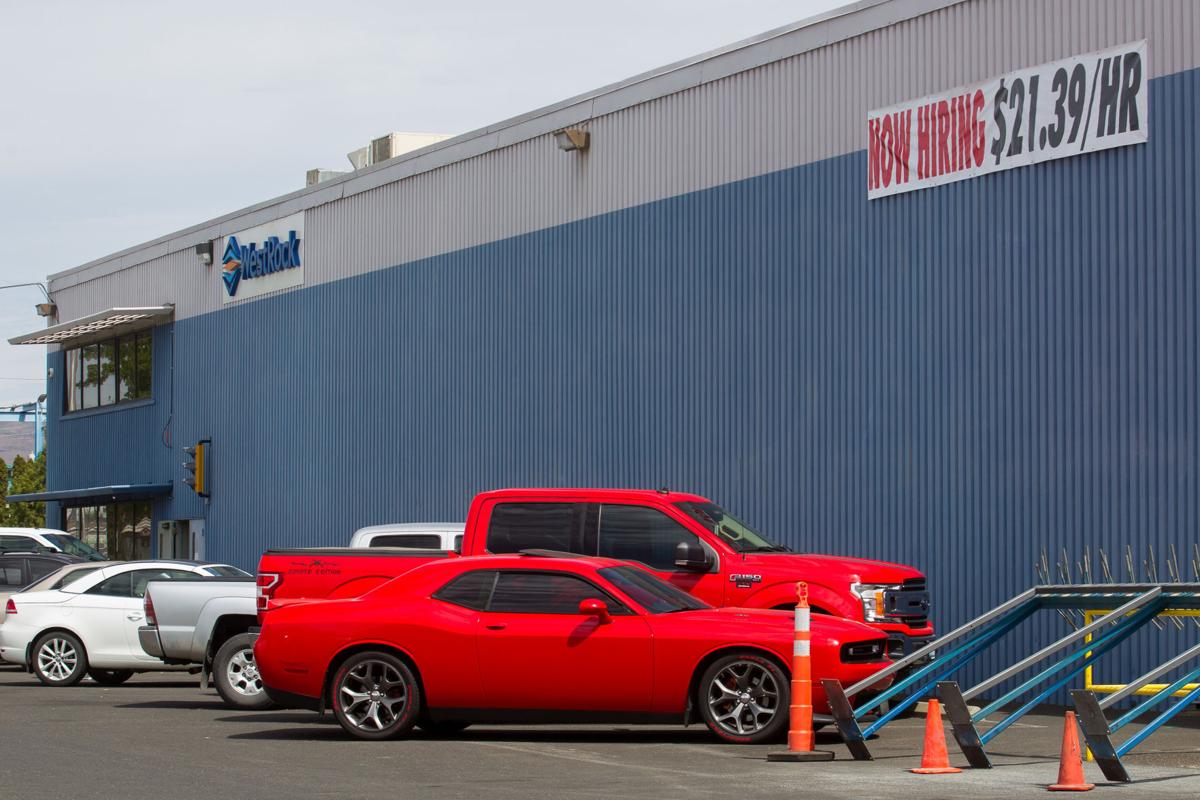 A job advertisement sign is shown outside of International Paper Wednesday, April 28, 2021, at 600 W. Ahtanum Road, in Union Gap, Wash.

A “Now Hiring” sign for Adventurer Manufacturing is shown hanging on a fence near West Washington Avenue in Yakima, Wash., on Wednesday, April 28, 2021.

On Wednesday, Wanda Riel had about 15 interviews scheduled with job applicants at her hotel, the Holiday Inn Express in Union Gap.

Riel, the hotel’s general manager, said it wasn’t a given that all 15 applicants would show up.

“We’ve had a lot of no-shows,” she said in a phone interview Wednesday.

Riel doesn’t dwell on the no-shows and focuses on selling the job perks — including a massive employee discount on hotel stays — to people who show up.

“A few years ago, people were coming into the door and filling out applications,” she said. “That’s not happening at all now. You have to find your way to them.”

Riel isn’t alone: Employers across the Yakima Valley are all struggling to find applicants for vacant job positions.

The difficulties employers have had have been so widespread that the Yakima chapter of the Society for Human Resource Management, or SHRM, sent out a news release this week highlighting the issue.

“The job market is definitely in recovery, but employers are asking, ‘Where are the workers?’” wrote Jonathan Smith, executive director of the Yakima County Development Association and president of the Yakima SHRM chapter.

The news release cites several factors that have contributed to fewer applicants to vacant positions. They include the ability to live on additional unemployment funds, child care and remote learning struggles of working parents, and removing a job search requirement to receive unemployment benefits.

Among those quoted in the news release is Amy Martinez, CEO of the South Central Workforce Council, which provides training and placement services for both workers and businesses.

Martinez said what makes the current hiring difficulties distinct is that it’s hitting multiple industries and isn’t limited to minimum wage jobs, reflecting a ramping up of operations as COVID-19 restrictions ease and the economy improves.

“If you want a job, there are plenty to get, and good-paying jobs as well,” she said in a phone interview earlier this week.

Don Meseck, a regional economist for state Employment Security, said that while Yakima County is still reporting a net loss of jobs, the loss has declined substantially since the start of the pandemic.

In May 2020, two months after the state’s stay-at-home order shut down numerous businesses, the county reported a 10% year-over-year drop in nonagricultural jobs, according to Employment Security figures.

By March of this year, the latest month job data was available, the county’s job loss was down to 2.8% , with the most significant losses in industries hardest hit during the COVID-19 pandemic, namely leisure and hospitality and local government jobs, which reported losses of 22.9% and 4.8%, respectively.

However, several sectors have seen growth for several months, including health services and retail trade. In March, the year-over-year increases were 2.9% and 3.7%, respectively.

“I expect the growth trend to continue,” Meseck said.

Going ‘out of the box’ for job applicants

For employers, this increased labor force hasn’t translated into a lot of hiring, but rather the opposite.

Before the COVID-19 pandemic, it would take Tree Top, the Selah-based fruit processor, 27 to 28 days to fill a job vacancy, said workforce development manager Tina Powers.

These days, it takes nearly double that time — 52 days. And for some positions, it’s upwards of 90 days, if the company is able to fill them at all.

The company has vacancies across several departments, including accounting and finance, administrative services, manufacturing production, maintenance and the warehouse.

The company has tried several tactics to attract workers, including advertising and reaching out to candidates on job posting sites. The company previously offered referral bonuses to employees.

“Depending on the position, we’ve had hiring challenges, especially if it requires shift work and/or relocating to the area,” Powers said. “In terms of finding people to work, this has been an issue for a few years, but has been amplified and become prevalent (in the COVID-19 pandemic).”

Paragon Films, a Union Gap plastics manufacturer, kept operating as an essential business during the pandemic.

Pippins has had to hire in a job seeker’s market before — just a few years ago, when the region saw record low unemployment, it was challenging to find qualified workers.

But this time around, it’s taken a massive effort to get any applications, let alone ones from skilled workers.

“The pool itself has not been as large,” she said.

It’s not for lack of effort — the company is displaying “now hiring” signs at the company’s Union Gap facility and other signs around town.

The company has also started looking into recruiting high school students interested in a manufacturing career as an alternative to a traditional college education. One source has been participants of Manufacturing Academy, an online pre-apprenticeship program where students can gain skills and earn various certifications.

Pippins said the hope is to find graduates of the program who would be good candidates for the company’s various openings.

“We’re trying to think out of the box,” she said.

Martinez of the South Central Workforce Council said one reliable source of applicants previously had been job fairs. Such events were held frequently before the COVID-19 pandemic.

Martinez said there had been discussions about holding an in-person fair outside the company’s offices in Union Gap to comply with COVID-19 safety measures. However, Martinez said there are many unknowns whether such a fair would be successful now.

“What we’re concerned with now is no one showing up and businesses sitting out in a parking lot,” Martinez said.

Riel of the Holiday Inn Express said the hotel had an increase in applicants after taking out paid ads on Indeed.com, a popular job posting site.

But she also knows that with many companies competing for applicants, job seekers can dictate their terms. With her jobs paying just above minimum wage, she also knows that her hotel will frequently be passed up for positions with better pay and better hours.

As a result, Riel said she and the hotel have been willing to accommodate applicants’ requests, such as providing specific shifts that work for an employee with children or avoiding scheduling a worker on a particular day if they aren’t available that day.

Riel hopes that offering additional accommodations help her fill the remaining vacant positions. The hotel has about 23 part- and full-time workers. She’s hoping to increase that to 30, which what she needs to run the hotel sufficiently.

“We’re accommodating as much as we can,” Riel said. “We got to run the hotel. We just can’t be rigid anymore.”