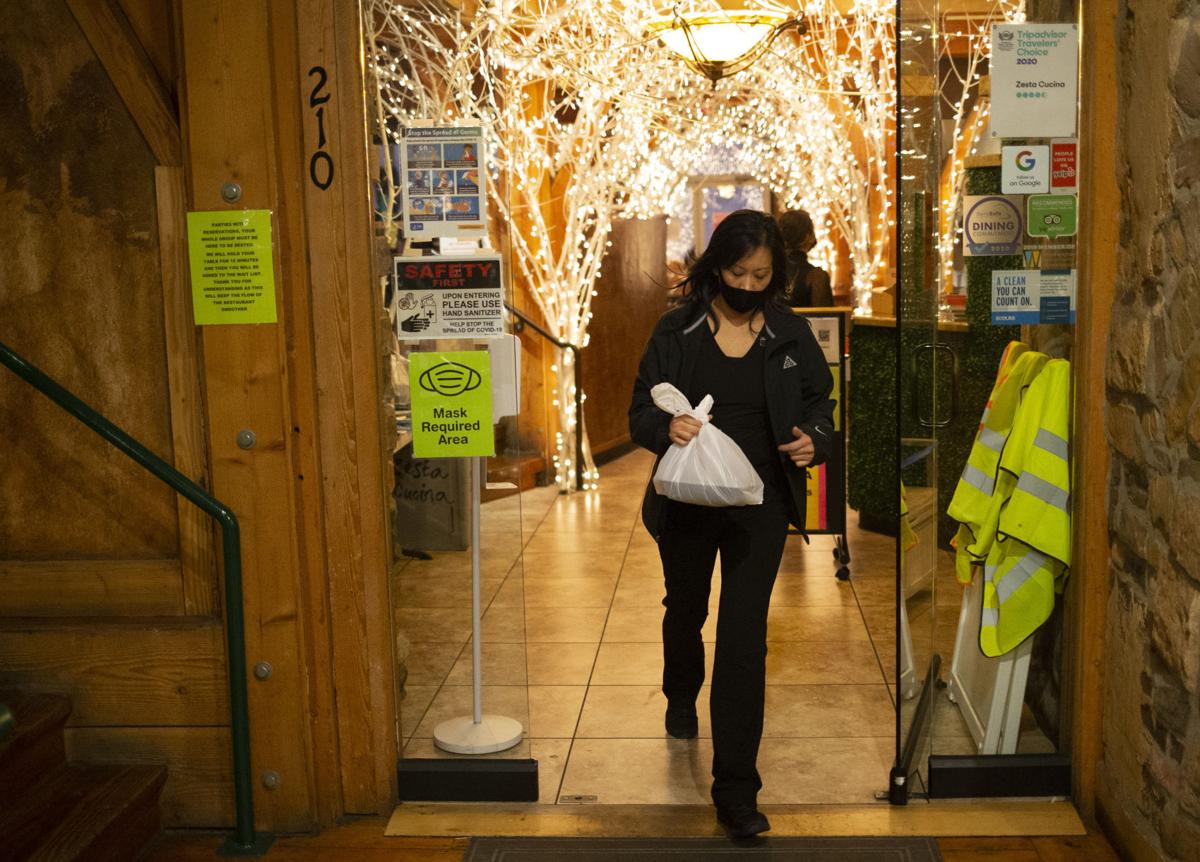 Cris Davis brings a pick-up order out to a customer waiting in their car at Zesta Cucina on Friday, Jan. 8, 2021, in Yakima, Wash. 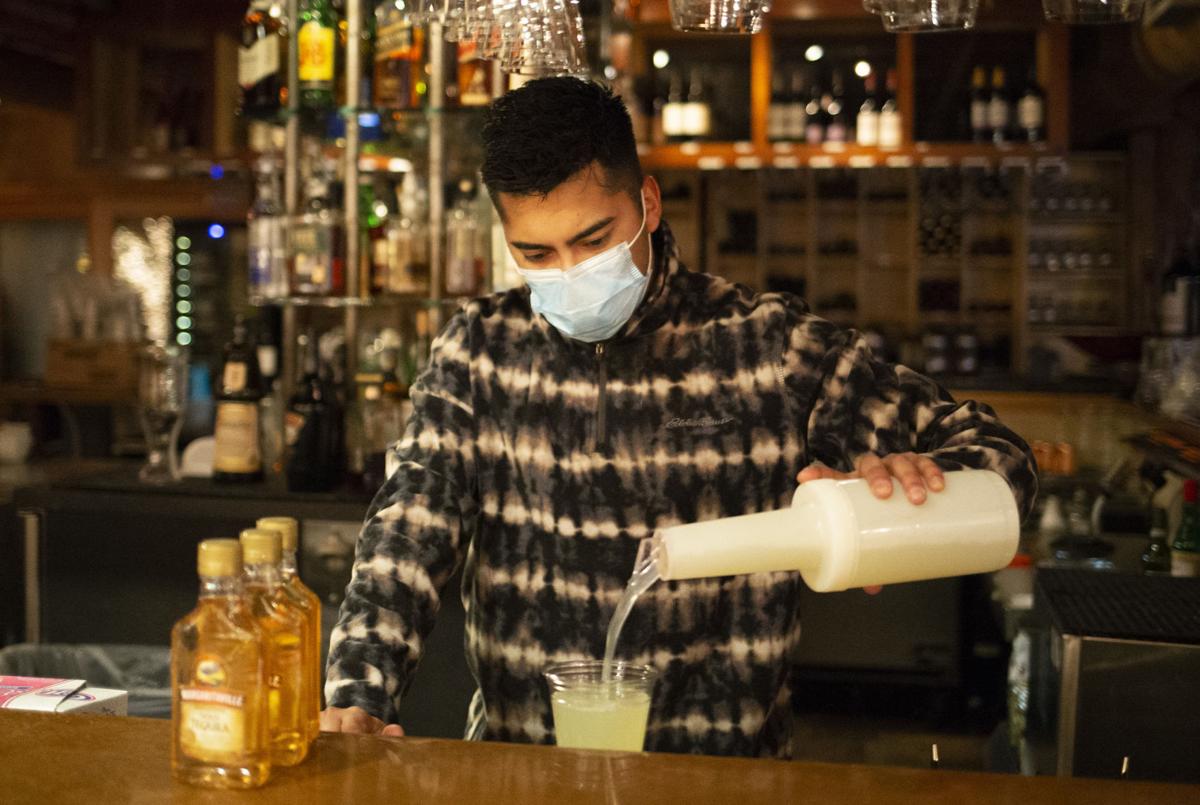 Jaziel Rodriguez makes a to-go margarita kit for a pick-up order at Zesta Cucina on Friday, Jan. 8, 2021, in Yakima, Wash. 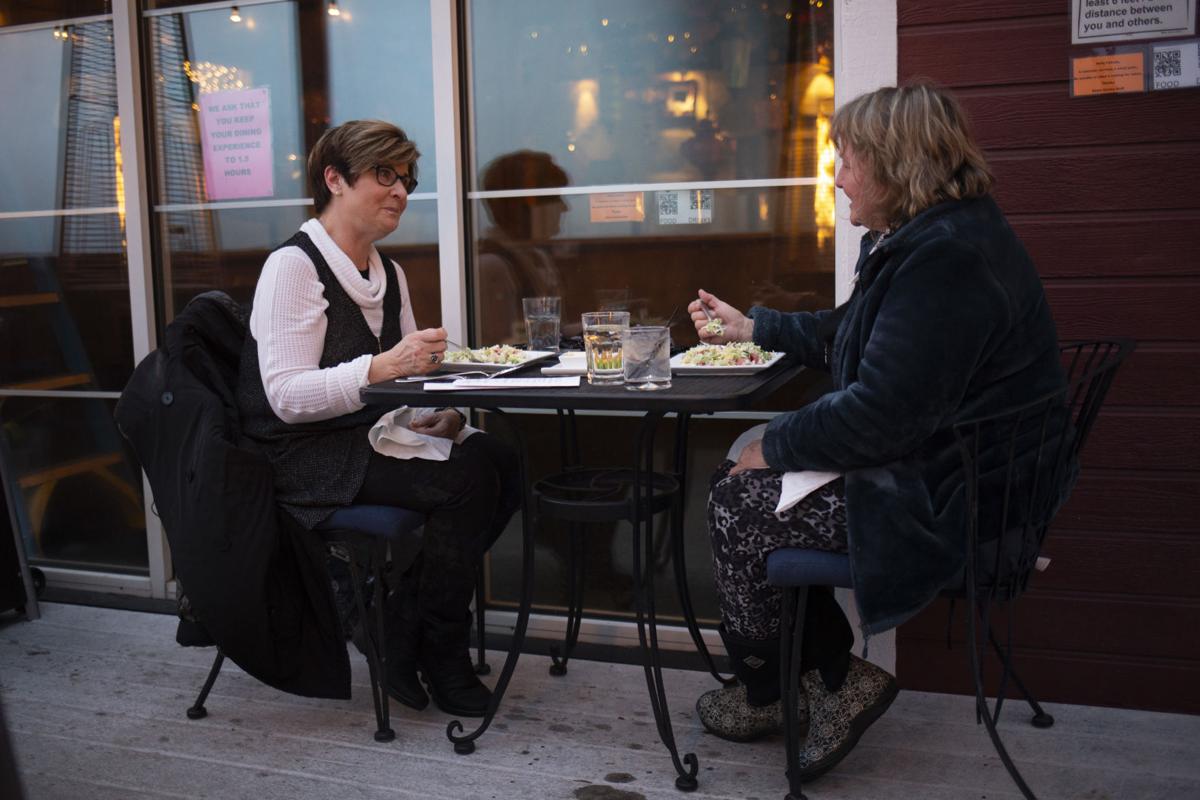 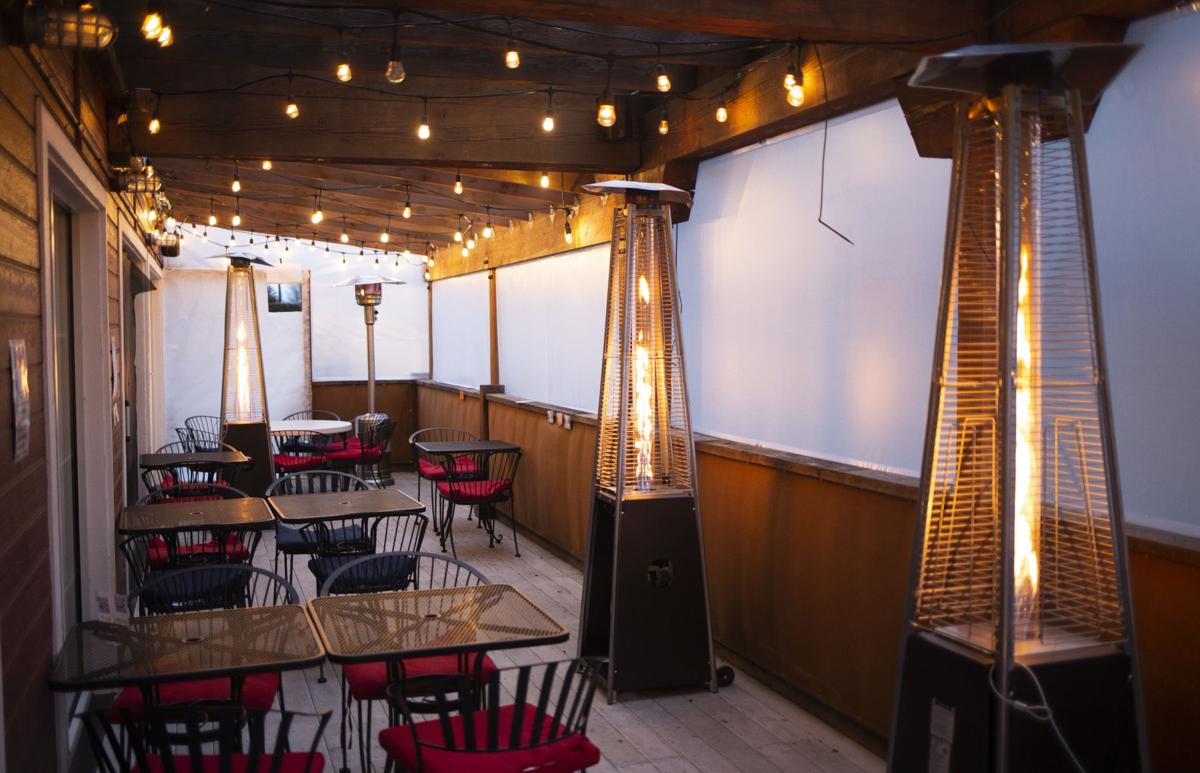 The patio dining area at Zesta Cucina is pictured on Friday, Jan. 8, 2021, in Yakima, Wash. 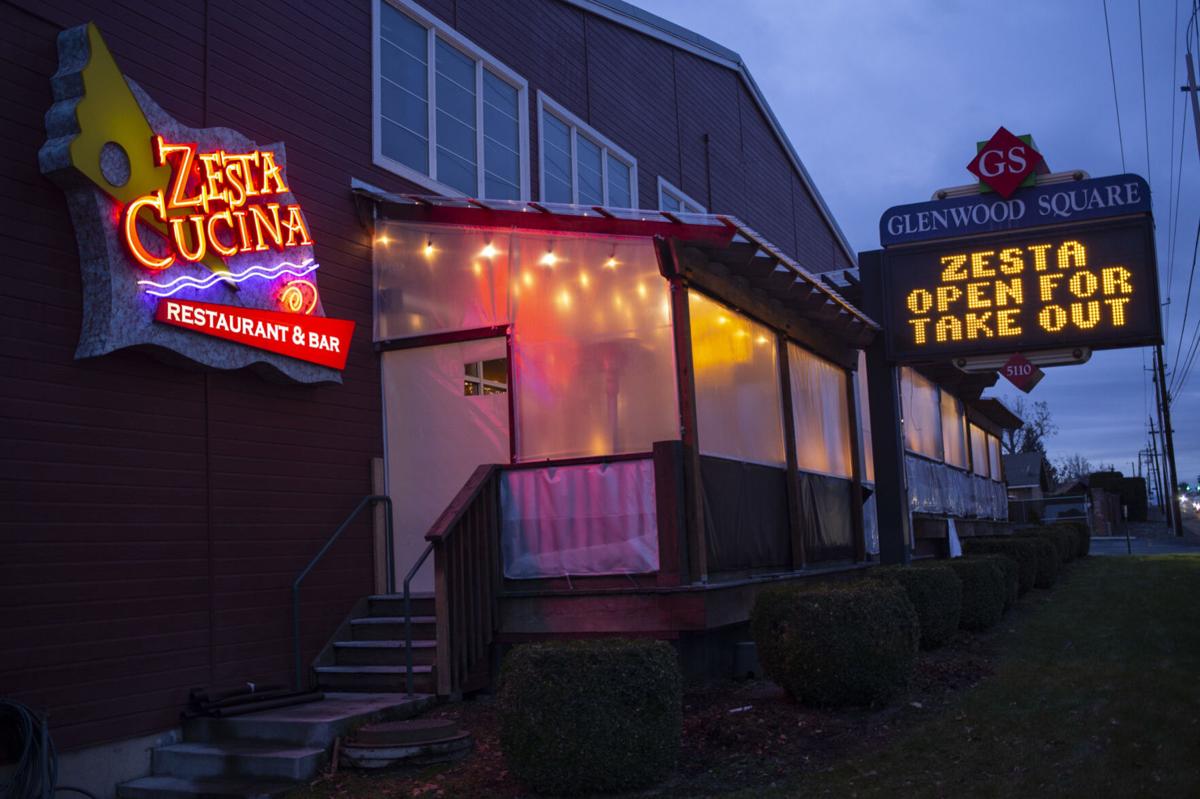 Cris Davis brings a pick-up order out to a customer waiting in their car at Zesta Cucina on Friday, Jan. 8, 2021, in Yakima, Wash.

Jaziel Rodriguez makes a to-go margarita kit for a pick-up order at Zesta Cucina on Friday, Jan. 8, 2021, in Yakima, Wash.

The patio dining area at Zesta Cucina is pictured on Friday, Jan. 8, 2021, in Yakima, Wash.

The latest proclamation not only seeks local control over managing the pandemic, but calls on the Legislature to limit the governor’s emergency powers. The commissioners, all Republicans, accuse Inslee of running a one-man show without involving local elected officials across the state.

“I think it’s a travesty that we have Democrat and Republican voices that are just cut out,” Commissioner Amanda McKinney said. “There’s a reason we have checks and balances.”

“Everyone around the state, including Yakima leaders, are heard,” he said. “There’s nothing personal or specific to Yakima about this, everyone is in the same boat.”

Tensions over the state’s response to the pandemic have in some ways pitted Yakima County and the governor’s office against each other.

Commissioners in December approved a proclamation asking Inslee for more local control in managing the spread of the virus and calling on legislators to limit some of the governor’s authority in emergency declarations.

Faulk called the proclamations local partisan politics. They have no binding power over the governor.

Inslee’s office views Yakima County as a place where some elected officials subscribe to conspiracy theories calling the pandemic a hoax and refuse to mask up, encouraging others to do the same, Faulk said.

In April, the Yakima City Council by a vote of 5-2 censured Councilman Jason White after he posted comments on his personal Facebook page encouraging others ignore coronavirus safety precautions and insulting the LGBTQ community. The council publicly denounced his comments.

Inslee’s revamp sends all counties back to Phase 1 in the reopening plan; maintains closures of several local businesses, such as movie theaters, and bowling alleys; and prohibits indoor dining until COVID-19 cases decrease.

The plan puts counties into regions where their progress on reducing the number of cases, hospitalizations and other metrics will be assessed together.

Under state law, Inslee has the authority during emergency declarations to enact proclamations deemed necessary “to help preserve and maintain life, health, property or the public peace.”

Inslee declared a state of emergency Feb. 29 in response to the rapid spread of COVID-19 in the state and has extended shutdown orders and other restrictions devised under his Stay Home, Stay Healthy order. Restrictions were eased somewhat in Yakima County in late summer and fall as case numbers improved.

Many of the proclamations Inslee has issued under his Stay Home, Stay Healthy order fall under emergency declaration provisions that are not bound by 30-day limits or subject legislative approval.

State law divides emergency powers into two distinct categories. The first allows restrictions to public gatherings, manufacturing and the purchase and sale of goods. Restrictions made by the governor in those categories are not subject to 30-day limits or legislative approval, according to state law.

The second category deals with government operations ranging from interlocal agreements to regulations on tax due dates, penalties and tariffs, for example. Those are subject to legislative approval after 30 days.

Majority and minority leaders in the House and Senate — referred to as the four corners of the Legislature — may approve such extensions when the Legislature is not in session.

Leaders have approved extending a swath of proclamations under the pandemic, though they haven’t approved everything.

A group of lawmakers from the Yakima Valley wants all restrictions subject to a 30-day review by legislative leaders.

“I know that there are already a couple of bills aimed at peeling back some of the powers given to him,” said state Sen. Curtis King, R-Yakima.

Democrats control the majority in the state House and Senate, and don’t seem as enthusiastic about altering the governor’s emergency powers.

Commissioners have objected to Inslee’s shutdown order, saying it’s unfair to local eateries, bars and wineries while larger retail and other businesses keep their doors open.

Commissioners issued a news release criticizing the shutdown order following an outbreak at Costco in Union Gap last month where more than 170 were infected. Commissioners said they agreed with the Yakima Health District’s handling of the outbreak, but said there was a double standard when it came to the store remaining open and the closure of local businesses and schools.

The health district said it hasn’t closed any local businesses as a result of an outbreak, and instead works closely with them to protect people’s health. Some businesses have closed on their own after an outbreak.

Commissioner LaDon Linde said county officials are concerned about keeping people safe, but the fate of local businesses impacted by the pandemic also needs to be considered.

“We are concerned, we see the health reports every day, we know our hospitals are filling up — these are real concerns,” he said. “However, they are not the only significant effects from COVID-19.”

Linde said he fears several restaurants and other businesses caught in the shutdown order may never recover from losses incurred.

“There are communities all across the state where businesses that really reflect the value of the community have closed forever,” said state Rep. Bruce Chandler, R-Granger.

“You work together to survive,” she said. “We didn’t pour this many years into our business to go under during a pandemic.”

He said only a small number of cases have been traced back to restaurants here and that Washington has enacted stricter restaurant and bar guidelines than other states.

King accuses Inslee of basing the shutdown order on nationwide data from the Centers for Disease Control, which he said is being unfairly applied to Washington.

“We’re upset about the fact that it’s been an unfair process in the way these proclamations have been going,” King said. “He’s picking the winners and losers.”

Melissa Sixberry, director of disease control for the Yakima Health District, said places where people gather socially without masks for extended periods of time — such as restaurants and bars — are high-risk areas for community spread.

“Any location in which you are in close contact or unable to wear a mask is going to be a higher risk than others,” Sixberry said. “When you are eating and drinking, you cannot wear a mask. Those that are dining are usually seated at least an hour while talking and laughing which increases droplets.”

McKinney said she was denied access to a recent Microsoft Teams videoconference discussing the revamp plan held by Inslee’s office and health officials.

“I could not attend the meeting, so I waited for 20 minutes for someone to admit me both on phone call and through Teams and I was not admitted,” she said. “So, there is a massive problem when an elected official is not able to gain any more insight than the general public on something that should have input from the people.”

McKinney said her request for a copy of the draft plan was initially denied by the Yakima Health District. She said the district was told by its attorney to release it.

“We (commissioners) hire the health administrator,” she said. “I thought, ‘Well if he get it, I get it,’ ” McKinney said. “Why should I as an elected official have to go through all the channels and pulling in legal counsel? Why isn’t this given voluntarily?

“I don’t think anyone in Olympia doubts that the reason these are coming out in emergency orders is because the governor doesn’t have to include anyone else,” Chandler said.

King said his caucus in June sought a special session to discuss the budget and other pandemic-related issues, but the Legislature couldn’t muster the two-thirds vote required to convene.

“We asked the other side of the aisle to join us and come up with the two-thirds vote and they wouldn’t and so here we are,” King said. “So we’ve had one-man rule for 10 months and that’s just the way it’s been.”

Faulk said Inslee’s office has repeatedly heard from elected officials from the Yakima area, and that their ideas of how to move forward are insufficient.

“We have a thorough rundown of how they think the state should proceed, and if we took that route we would see a level of suffering heretofore unseen over the course of this emergency,” he said.

He points to a time when Yakima County boasted the highest infection rate on the West Coast and at one point considered among the worst-performing counties in the nation in slowing the virus’ spread.

“Appropriate advice from public health experts was ignored,” Faulk said. “The state had to specifically target interventions in Yakima County to save lives. And at the same time, a number of influential leaders were telling people to not take the pandemic so seriously.”

In early June, local businesses, community members and the health district launched a “Mask Up To Open Up” campaign promoting mask use, and distributed free masks. About two weeks later, Inslee issued a ”no mask, no service” rule for Yakima County, requiring businesses to turn away customers without masks. Both efforts led to reductions in COVID-19 numbers.

Even now, Yakima County’s COVID cases and hospitalizations are close to the worst they’ve been during the pandemic. As of Jan. 2, Yakima County had 1,019 cases per 100,000 over two weeks, the highest in the state. It’s nearly double the rates in Spokane, Grant, King and Pierce counties.

The test positivity rate was 45% on Dec. 28 in Yakima County, the highest it’s been during the course of the pandemic. Hospitalizations were at 47 on Tuesday. The county had an all-time high of 70 people hospitalized Dec. 29.

Faulk said Inslee is doing what he’s supposed to under an emergency declaration — swiftly enacting policy to help keep people safe, he said.

“We hear these voices, we discuss ideas, but it would be inappropriate and dangerous to abdicate the final decision-making that rests with the executive branch as established by the Legislature,” Faulk said.

Rodriguez said she wishes restaurants could return to allowing 25% capacity. She said following safety guidelines weren’t a problem. Even now surfaces are cleaned and sanitized frequently and everyone masks up, including customers until they are seated.

She said she isn’t upset with Inslee nor opposes the voice of commissioners.

Rodriguez believes her business will weather the shutdown.

She said she has respiratory issues and safety is paramount.

This story has been edited to correct the outside dining schedule for Zesta Cucina.