The Yakima City Council will talk about switching to a mayor-council form of government at a future meeting.

The idea of a mayor-council government, sometimes referred to as a “strong mayor” system, has been contentious in Yakima in the past. Voters shot down a similar proposal in 2011. Councilwoman Holly Cousens, who proposed discussing the charter changes on Tuesday, stressed that her motion was only to open up the topic for discussion. Even so, council discussion erupted.

Right now, Yakima has a council-manager form of government, with a city manager responsible for daily operations and employees. A switch to an elected mayor would place the mayor in the position of overseeing daily operations, while the city council would remain as the legislative authority. The change would require voter approval to change the city’s charter.

Those in favor of changing to a mayor-council government often cite the separation of powers and that the mayor would be accountable to all voters in the city, rather than to those in a specific district.

Those against note that the shift would concentrate power in one person and that in small cities there is often a smaller pool of qualified applicants to step into the position.

Councilwoman Dulce Gutierrez noted that a federal court had already found past citywide elections violated the Voting Rights Act by disenfranchising Latino voters. The court imposed a federal injunction on Yakima, and switching the city’s government to a council-manager form would reawaken those wounds, she said.

“This is by far one of the most irresponsible things I have ever witnessed in the Yakima City Council in my four years,” she said. “Any at-large or citywide position in our community is in violation of the Voting Rights Act of Latino citizens in this community.”

Mayor Kathy Coffey said she felt it was fair and good for the community to have a say in the process. Cousens repeated that her motion only asked staff to gather information.

“This is just to put it on the next City Council agenda for a discussion so people can have the opportunity to speak,” Cousens said.

The motion passed with a 3-2 vote, with Coffey, Cousens and Councilman Jason White voting in favor. Gutierrez and Councilwoman Kay Funk voted against. Council members Brad Hill and Carmen Mendez were absent.

After about 20 minutes of heated discussion, the council voted unanimously to direct staff to draft a memorandum about the possible legal risks of adding a charter change to a February ballot.

Putting a charter change on the ballot can happen two ways — through a voter petition process called an initiative or through council action, called a referendum. For an initiative, organizers must obtain signatures equal to 15% of votes cast in the preceding general city election in order to put the measure on the ballot. For a referendum, a majority of City Council members must vote in favor of adding the topic to the ballot.

Tuesday’s meeting was not the first time switching to a strong mayor form of government has come up publicly. The 2011 proposal, also led by Smith, was shot down by a 52 to 48 percent vote. Discussions also resurfaced in 2017, and earlier this year.

Smith, who spoke at Tuesday’s meeting during public comment, said he wasn’t asking City Council members to take a side regarding the proposed charter changes. He was asking them to leave it up to voters.

“None of this will in any way change the City Council’s composition or method of election,” Smith said. “It allows the voters the right to choose the person who runs city hall, and it creates an elected position that is politically accountable to the entire city and not just one particular district.”

Yakima County Commissioner Mike Leita, who also has spoken out in the past in favor of an elected mayor form of government for Yakima, said the proposed changes aim to strengthen the council’s ability to govern and allow all council members to be heard fairly and equally.

“An elected mayor will be guided by your respective district needs and charged by the voters to deliver focused outcomes in partnership with you and future council members to come,” Leita said Tuesday.

Funk, in an Aug. 28 Facebook post, said that Smith’s premise is that an elected mayor, directly answerable to the voters, would deliver all good things. But that was not the case for Wapato or Union Gap, which employ elected mayor and strong-mayor forms of government, she wrote.

“Juan ‘Eddie’ Orozco was an elected mayor in Wapato; how did that work out? Union Gap previously had a ‘strong mayor’ and their city government was plagued with scandal and abuse,” Funk wrote. “Certainly Yakima city government has been troubled and, in some ways, dysfunctional, but this is not the right answer, or the last that we will hear of it.”

At Tuesday’s meeting, Funk requested that Lt. Gov. Cyrus Habib provide an outside legal opinion about legal issues the city might face should the charter changes be added to the 2020 ballot. Council nixed the proposal with a 2-3 vote, with Funk and Gutierrez voting in favor. Funk then said she planned to reach out to the American Civil Liberties Union, which had sued the city over the Voting Rights Act violations, to see if they planned to sue the city again.

Gutierrez asked for more information about the city’s legal liabilities should the switch occur.

“If we want to make sure we can rationalize this and that we’re not going to go to court over the same thing that we already lost $3 million over, over three years of litigation that created great divisions in our community, then we have to ensure that we can cover all our bases,” she said. “I’m not going to sit here silently while people attempt to violate the Voting Rights Act and violate the voting rights and civic rights of Latinos in this community.”

The council voted unanimously to direct city staff to create that memo.

Smith, in a follow-up interview, said that the plan he proposed at Tuesday’s council meeting would not turn Yakima’s government into the same type of government as Wapato. State law allows for two different forms of elected mayor leadership, he said. Under the charter changes he proposed, the elected mayor would manage the city’s daily operations and implement policies established by the City Council but would not have a vote in those matters.

The mayor would have veto power, which the council would need to override with a supermajority vote, he said.

Smith said he was happy that the end result of the council meeting was that the charter changes will be discussed openly. He said Gutierrez’s concerns about the city being sued should the changes move forward were “technically valid.”

“I don’t know whether the ACLU would sue,” he said. “This is America, and they are in the business of suing, but I don’t think they’ll prevail. The plan we put together specifically was to leave the council alone and not interfere at all with the court order.”

Smith said that adding the charter changes to the 2020 ballot through council referendum, as opposed to voter initiative, would be much easier, given costs and time associated with voters collecting the needed signatures.

The timeline Smith proposed requires the council in mid-

December to put the charter change on the ballot for the February election. Candidates would campaign for the mayor’s job starting in May 2020, with the general election in November 2020. An elected mayor could take office in January 2021. Smith said he’s had conversations with council and community members about the proposed changes, and a main concern is that the February election would be too soon.

But he noted that the council voted Wednesday at a budget session to add the issue of raising levy lid lift taxes to the ballot of that same election.

“It’s the exact same time frame,” he said. “Four months is plenty of time for discussion, especially when we have already had a community discussion about this in past years.”

The council estimated that the cost for doing so would be about $50,000. The ancillary costs for adding the mayor-council shift to the same ballot would be about $4,000 or $5,000, Smith said.

The mayor and two council members are not seeking reelection, so there will be at least three new people on the council next year. The council also is in between city managers and is in negotiations to hire an interim city manager. 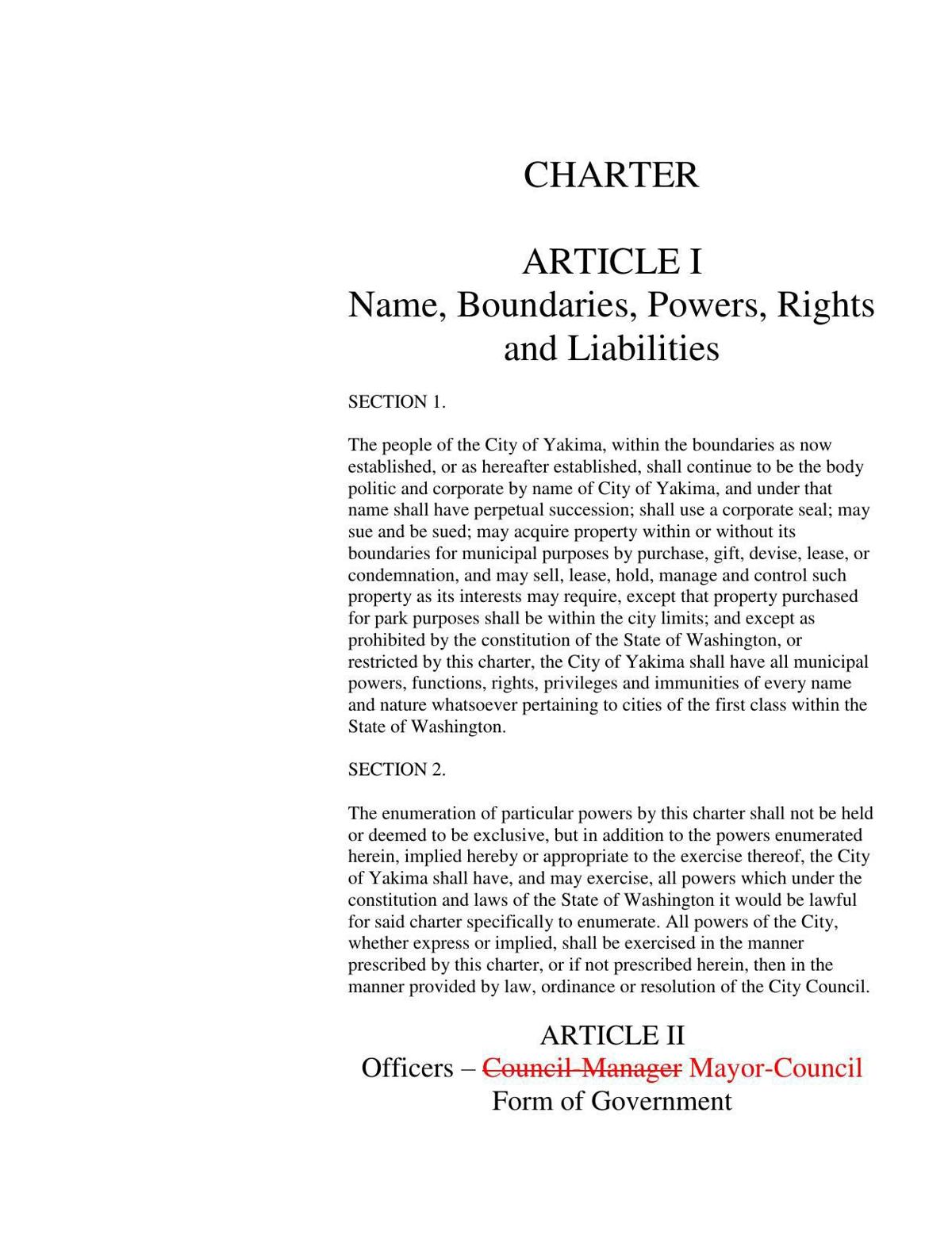 Editor's note: This story has been updated to reflect the proposed charter changes were brought forth by Smith, Leita and Edler and that signatures collected for an initiative must equal at least 15% of votes cast in the preceding general city election to put the measure on the ballot.

Desegregation also to be discussed

Council member Dulce Gutierrez said an upcoming discussion about a strong-mayor form of government would be a perfect time to also talk about efforts to desegregate the city, a term she said she used intentionally.

“People don’t want to talk about the fact that 16th Avenue separates our community like day and night, yet people want to violate a court order, a federal injunction, so that we can dilute the Latino vote in this city,” she said on Tuesday.

Councilman Jason White said he felt the “race issue” in the city was moot, given city projects that were aiming to incorporate more affordable housing into West Valley already, including a transitional housing project passed recently.

Councilwoman Kay Funk said she wanted to discuss Gutierrez’s concerns, noting there was a huge cultural divide in the city that “makes life very hard for a lot of hard working people.”

Councilwoman Holly Cousens said she was always in favor of receiving information prior to making decisions.

Gutierrez’s motion to add information about efforts to desegregate the city passed with a 3-2 vote, with White and Coffey dissenting.