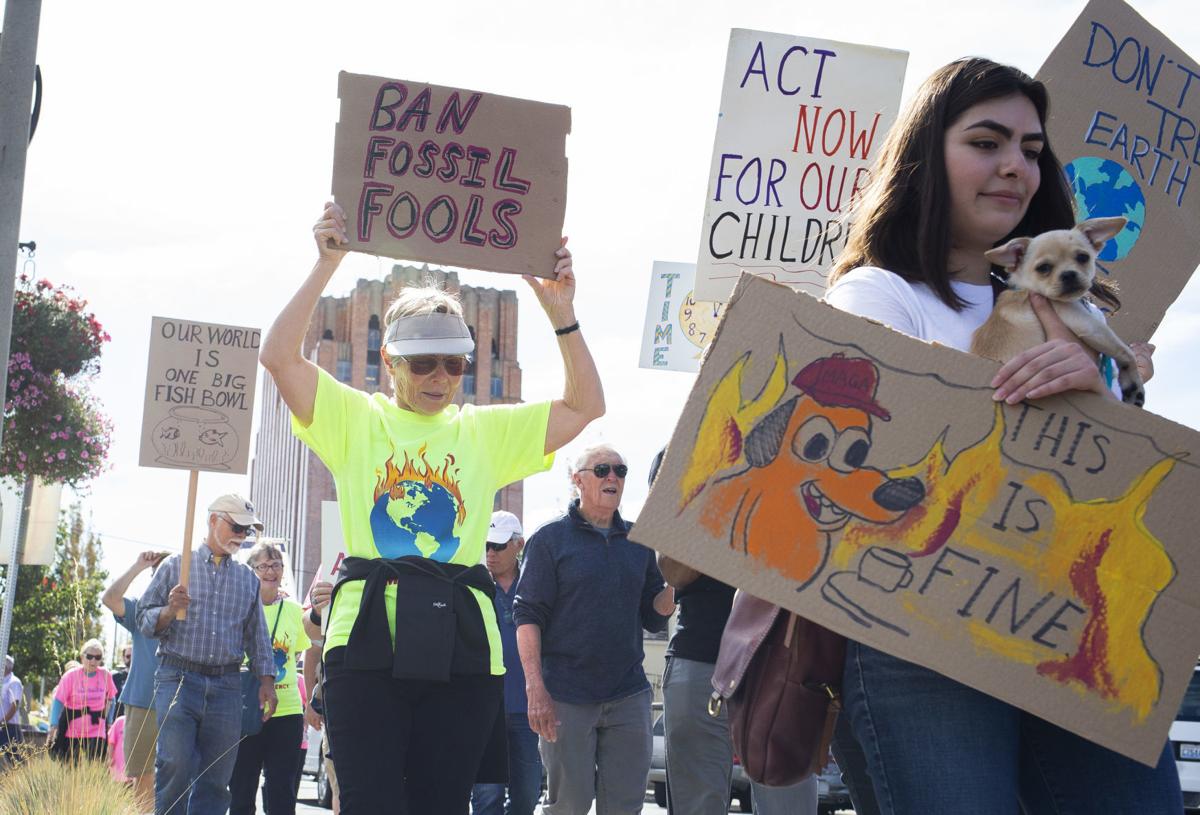 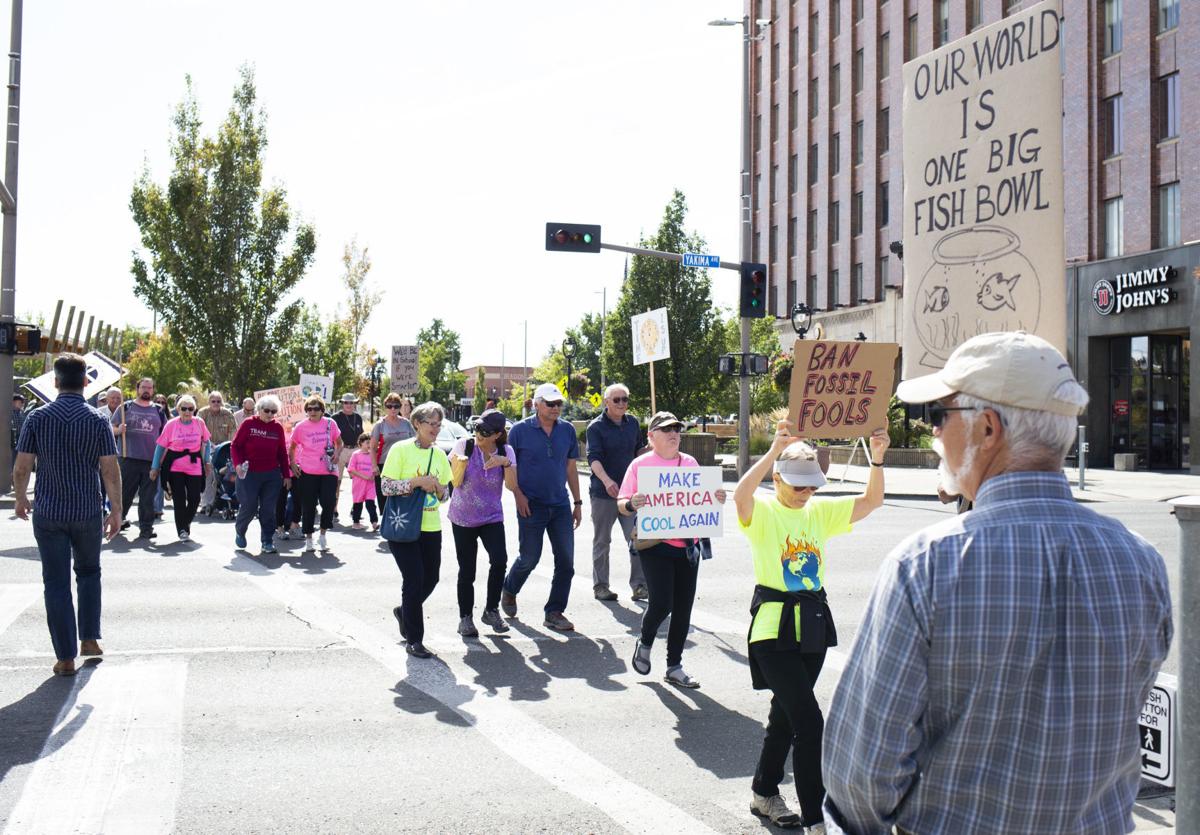 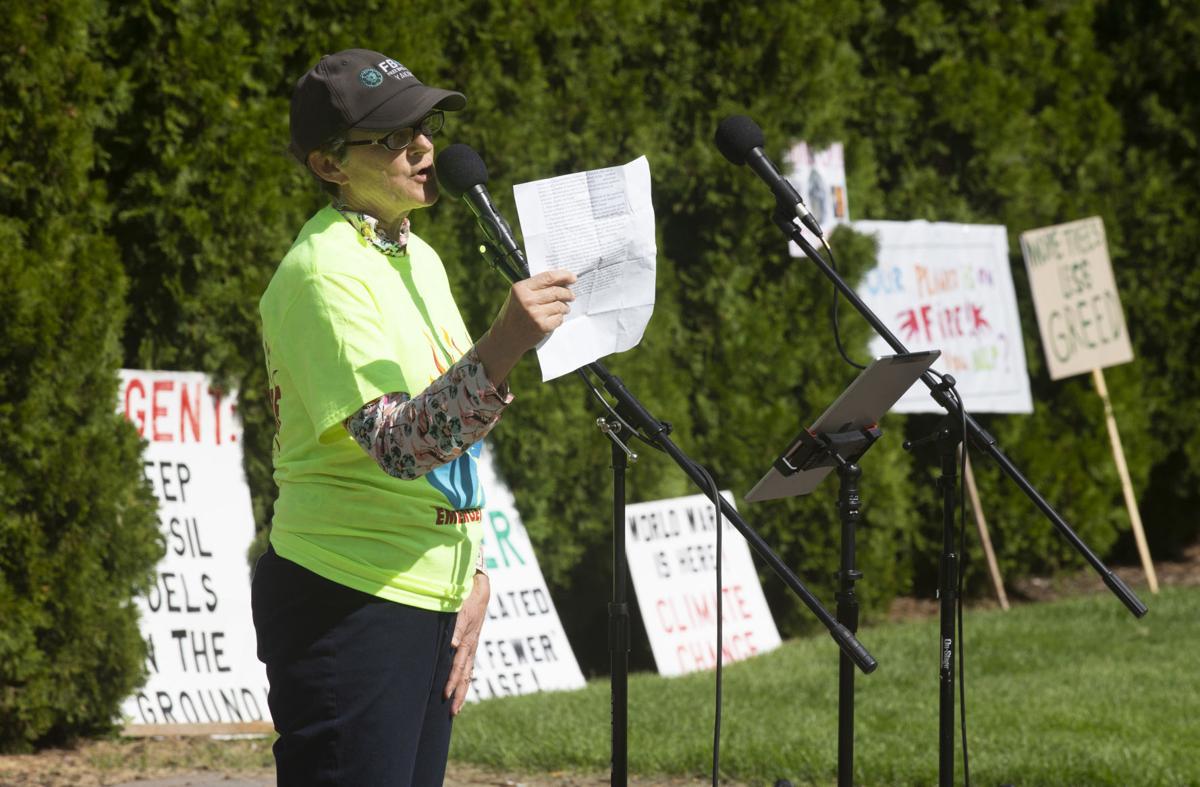 The question for those who participated in a climate strike march in Yakima on Friday was not whether climate change is real. The question was what they — individually and collectively — could do to help the planet recover.

About 100 people marched from Millennium Plaza to Performance Park downtown to raise awareness about climate conditions, to listen to featured speakers, and to network with other activists and local organizations working to combat climate change. The Yakima march coincided with climate strike marches nationwide and a call to action by Greta Thunberg, a 16-year-old Swedish activist who made national news by sailing across the Atlantic Ocean to attend the UN Climate Summit, rather than flying, to reduce emissions.

Thunberg’s message that youth can make a difference resonated with the dozen-or-so youths who showed up during Yakima’s march and many of the adults, who cited future generations, children, and grandchildren as reasons for participating.

Bridget Murphy, a 13-year-old eighth-grader at Naches Valley Middle School, jumped to address the crowd when the event’s emcee offered the mic to youths in the audience.

“They don’t talk about this much in school, and they should, because it’s a big problem and it’s going to impact everyone,” Murphy said.

Francisco Maltos, who drove in to march from Toppenish, said he wants to become part of the solution for the health of future generations.

“I get emotional when I think about the young people who have nothing to do with climate change, but who will be responsible for doing something about it,” Maltos said, pausing to collect himself and then adding, “People should do what they can, in a small way or a big way, to stand up and defend our Mother Earth.”

A call to action

Dr. Sara Cate, a Yakima-based physician and featured speaker at the event, said her profession has taught her to identify symptoms of illness and disease. She pointed to the Earth and recent hurricanes, storms, floods, destroyed homes, droughts, wildfires and heat waves.

“Our climate is sick, and the signs are everywhere,” Cate said. “Even with bold action, the Earth will be hotter, and the cost to our health is measurable and climbing.”

Signs that said “The seas are rising and so are we!” and “Our planet is on fire — will you help?” broadcast people’s hope that humans also could be part of the solution.

Yalisha Case and her four children were among the first marchers to enter the park Friday. Case said she talked with her children about climate change, then encouraged them to create their own images and messages for the march. Ansel Case, 10, created a double-faced sign that showed a sunny sky with colorful flowers sprouting from the roof of a tall building on one side and a smoke-smeared black-and-white landscape, devoid of life, on the other.

“This is what the Earth is like,” Ansel said, showing the dreary monochrome before flipping the sign to the prettier picture and announcing, “and this is how it should be.”

Miles Case, 13, drew an Earth on fire in the shape of a soccer ball, combining his desire to help the earth with his love of soccer. He hoped that move also would encourage other youths, who might be more interested in sports than the planet, to talk with him.

“More youth need to be engaged,” Miles said. “A lot feel like it’s too big of a problem, but together we can make a difference.”

Carol Mills, a retired educator, spoke about the importance of increasing renewable energy sources and highlighted some of the initiatives already in place, including the approval by the Yakima City Council of a “Solarize Yakima” campaign.

Emily Washines, an enrolled member of the Yakama Nation, also shared her hope that small communities who care can make a difference. Washines noted that tribal knowledge and efforts had returned sockeye salmon to the Yakima Valley after an almost 100-year absence and stressed the importance of protecting natural resources for future generations.

“We are not going to allow these things to happen silently,” Washines said, referencing initiatives that would harm the environment. “We have to hope, to come together, and find solutions.”

Hope for the future

Tony Long, a retired high school teacher who attended the march, believes in the power of education to catalyze change. Long taught about climate change in his contemporary world problems class and said it was the first time many of his students had been exposed to the topic.

A common reaction was despair. But Long also tried to help his students hang onto hope.

“You have to remember that while we can’t stop this roller coaster, we can pull together to slow it down,” he said. “Planet Earth is set up to generate and replicate life, and the Earth will heal itself. Life will resume.”

Long’s face lit up when he spotted one of his former students, Brenda Madrigal, at the climate strike. The 17-year-old senior at Davis High School said she wanted to show support for activists and other environmentally-minded youths.

“I was feeling a little hopeless, because not a lot of people my age are involved, but after coming today, I do not feel so alone,” Madrigal said. “It makes me feel like I can make a change.”

Kitty Jubran, who handles voter registration with the League of Women Voters, said she felt the event would be an opportunity to encourage people, particularly youths, to register to vote.

“We want these youth to understand that voting is a responsibility they have and a chance to make their voices heard,” Jubran said.

1) Use energy wisely- change to energy efficient light bulbs, unplug electronics when not in use, cut down on clothes' dryer use, weatherize homes

5) Reduce, reuse and recycle- say no to single use plastic and recycle what you can