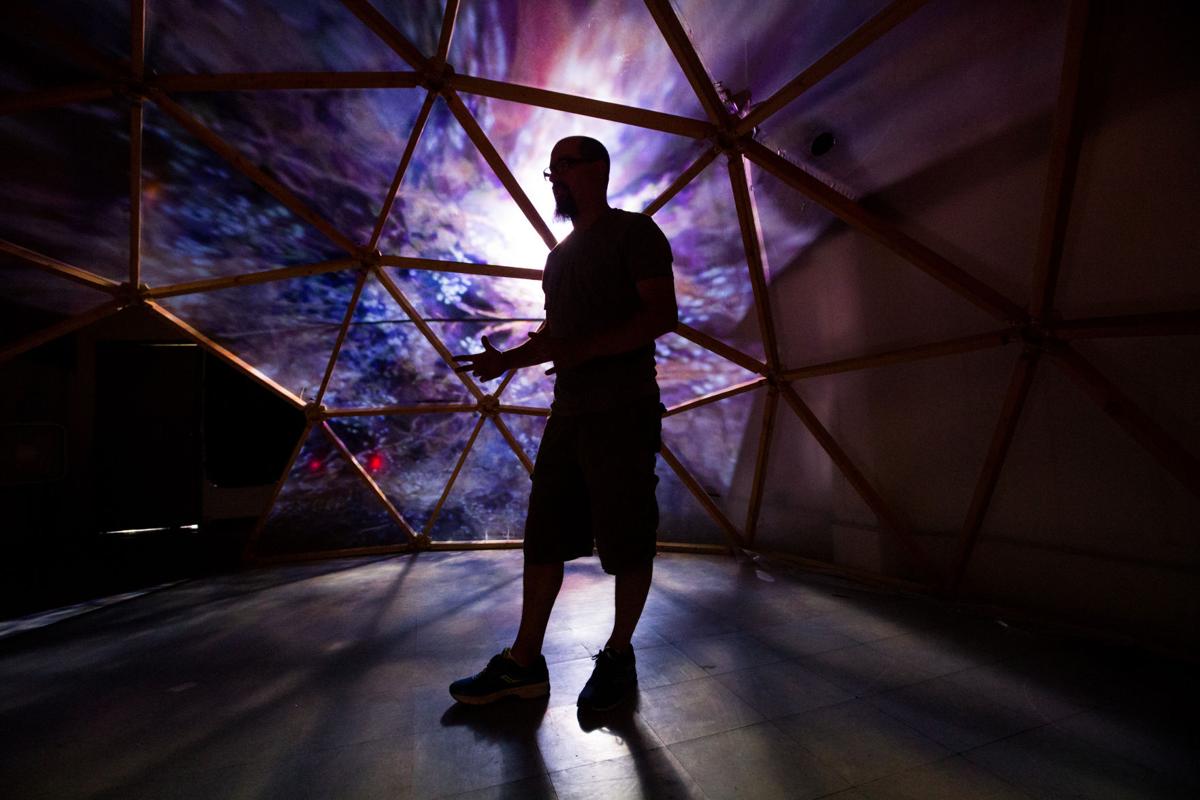 Artist-in-residence Andy Behrle explains his immersive digital art piece called "hydrodome" at Yakima Maker Space in Yakima, Wash., Tuesday, July 26, 2016. His new installation, which will be showcased at the University of Idaho in August, consists of a large plastic dome that allows viewers to walk inside and see video footage reflected on the walls and ground. (SOFIA JARAMILLO/ Yakima Herald-Republic) 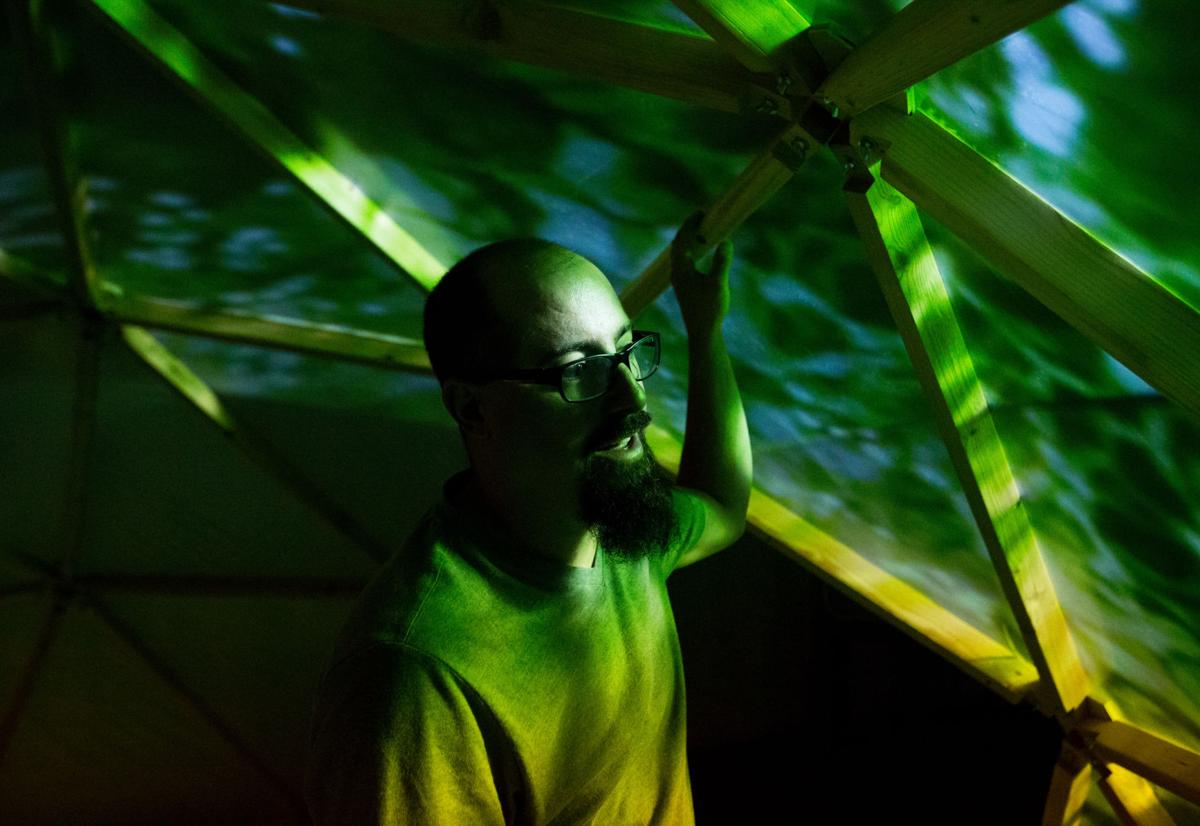 Behrle is Yakima Maker Space's first artist-in-residence at Yakima Maker Space in Yakima, Wash., Tuesday, July 26, 2016. Behrle said he used footage of water because he was inspired from his experience living in the pacific northwest. Behrle moved to Yakima four years ago. (SOFIA JARAMILLO/ Yakima Herald-Republic) 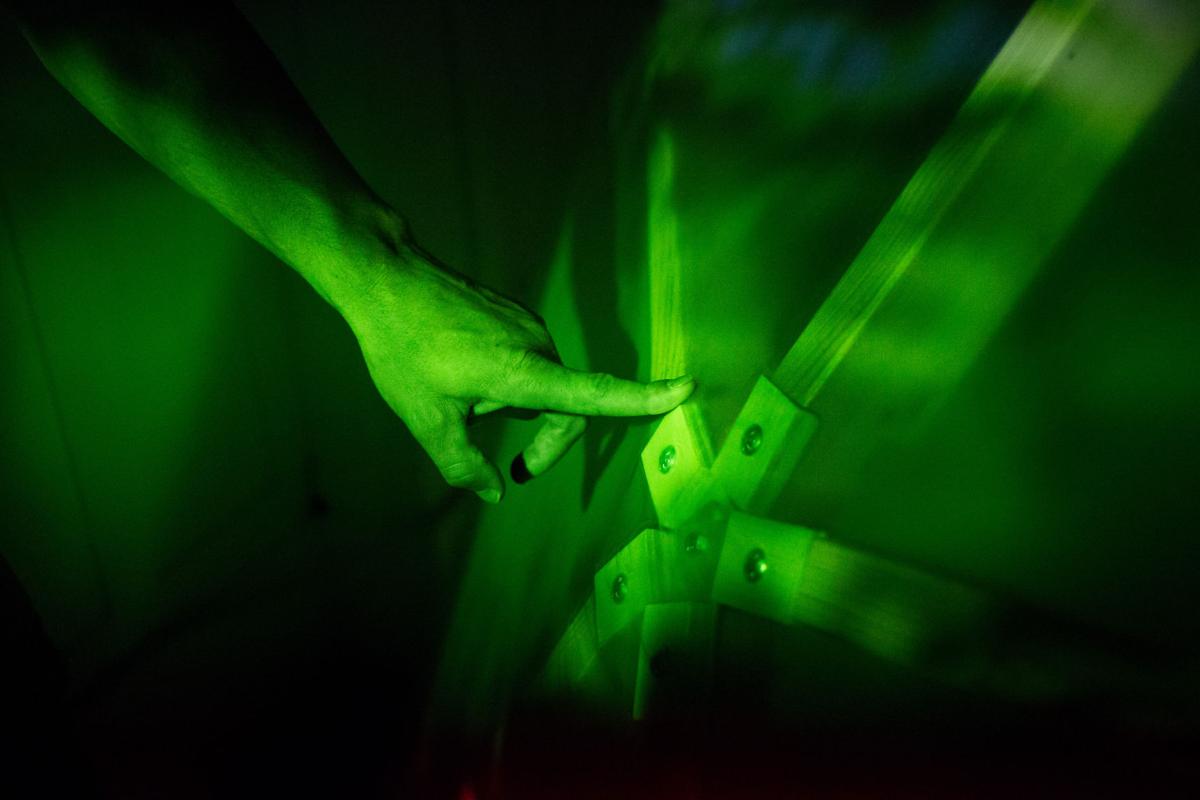 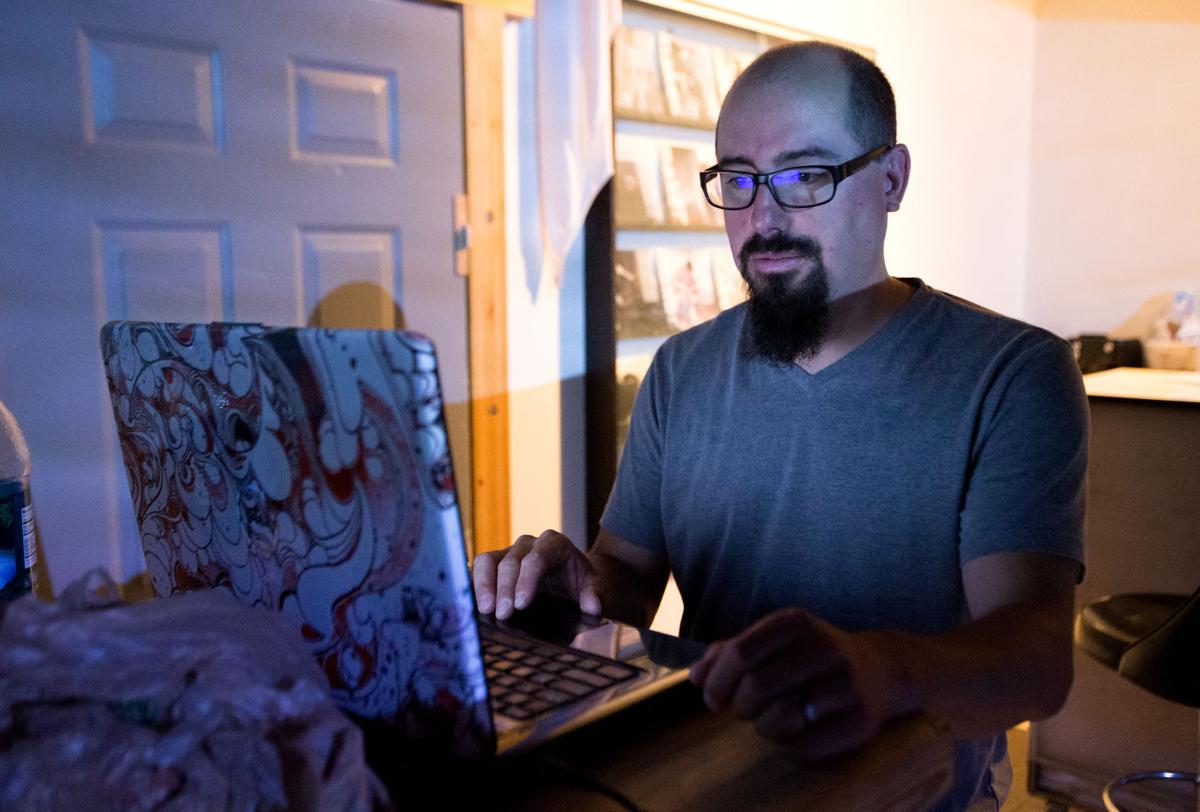 Artist-in-residence Andy Behrle explains his immersive digital art piece called "hydrodome" at Yakima Maker Space in Yakima, Wash., Tuesday, July 26, 2016. His new installation, which will be showcased at the University of Idaho in August, consists of a large plastic dome that allows viewers to walk inside and see video footage reflected on the walls and ground. (SOFIA JARAMILLO/ Yakima Herald-Republic)

Behrle is Yakima Maker Space's first artist-in-residence at Yakima Maker Space in Yakima, Wash., Tuesday, July 26, 2016. Behrle said he used footage of water because he was inspired from his experience living in the pacific northwest. Behrle moved to Yakima four years ago. (SOFIA JARAMILLO/ Yakima Herald-Republic)

The combination of technology, science and imagination in local artist Andy Behrle’s work doesn’t attempt to explain the wonders of the natural world – it just allows his audience to examine them from a different perspective.

His most recent large-scale project, “hydrodome,” which he has built over the past month as the Yakima Maker Space Gallery’s first artist-in-residence, is a walk-in dome made of wooden struts and translucent plastic panels through which he projects video of images such as rushing rivers. From inside, people experience the sensation of being submerged, surrounded by flowing water. The curve of the dome allows Behrle to further toy with the world’s physical properties, distorting the video image based on where the projector hits.

“That has become really my focus for the project – not necessarily trying to get the most resolute and the perfect image on the dome, but to use the architecture of the dome to show how the light bends and how the image stretches and shrinks and use the abstract qualities of the moving water to do that,” Behrle said.

Behrle is a natural fit for the Maker Space Gallery, an adjunct of Yakima Maker Space, the science, technology, engineering and mathematics-driven nonprofit at 16 S. First St. The 20-foot-wide, 12-foot-tall “hydrodome,” like much of Behrle’s work over the past several years, relies on the STEM disciplines to bring his imagination to life. It’s been helpful for him to hear the perspective of the organization’s “makers,” dues-paying members who use its facilities and tools. And it’s been illuminating for them to see his art project realized.

“I think the sensibility of a lot of the makers here is, ‘the product,’” Behrle said. “‘How much did it cost you to do this? How many holes is it? How many pieces of wood?’ And they’re really enthralled by that portion of it. And then the people more interested in fine art and art are just overwhelmed by the imagery. Having that marriage of what I do and the interests of people who walk through a place like this is really cool.”

That’s what gallery director Johnathan Heath Lambe had in mind when he approached Behrle about the artist-in-residence program, which Lambe plans to make an annual part of the gallery’s operations.

“There’s a great synergy to be had having an artist like Andy in our space and using the tools we have,” Lambe said.

The STEM appeal of the geodesic dome has been apparent since architect and inventor Buckminster Fuller popularized it as a utilitarian marvel more than a half-century ago. But Fuller never thought to use the dome as art.

“Buckminster Fuller used high level math and technology to come up with something functional,” Lambe said. “But Andy sees the aesthetic of that and says well I can do something compeletely different.”

That intersection — where art and science meet — is at the heart of the Maker Space Gallery’s mission. Its May show, for instance, featured the computer-science influenced work of Claude Andrew. And Lambe’s own art frequently deals with technology and our relationship to it.

Behrle, who started his artistic career making bronze sculptures of leaves and other biological ephemera, has always been interested in the natural universe. But it has only been in the past few years that mechanics and technology have begun to play a significant role. “Phantom Transmissions,” his February exhibit at the Yakima Valley Museum, involved repurposing old radios and phonographs to translate light and color waves into listenable audio.

The work has drawn notice. He’s landed solo shows throughout the Northwest since moving here in 2013 with his wife, Victoria Fox, a Yakima Valley Farm Workers Clinic doctor. He also has won grants, including one from Seattle-based nonprofit Artist Trust that helped him build “hydrodome.”

After a closing reception Saturday night, he’ll transport the piece to the University of Idaho’s Prichard Art Gallery, where it will be on display from Aug. 20 to Oct. 15. He has arranged to incorporate video footage collected by researchers there — fish scientists at first, but he’s also in talks with researchers from the university’s Electron Microscopy Center.

“They can see things at the molecular level,” Behrle said, breaking into a broad smile. “We can view this super-microscopic level like we’re smaller than that ourselves inside the dome.”

And he doesn’t plan to stop there. The next step is seeking out other research universities with art departments to use whatever footage their research may produce.

“The images they’re getting these days are so stinking beautiful,” he said.

To the scientists those images are mostly a byproduct of their research, but to Behrle they’re a new way of looking at the world, not because they’ll lead to new scientific discoveries but because the images themselves are art.

“I don’t have any answers,” he said. “I’m not necessarily posing any questions. I’m just putting what I think is really interesting information in front of people in what I hope is a beautiful way.”