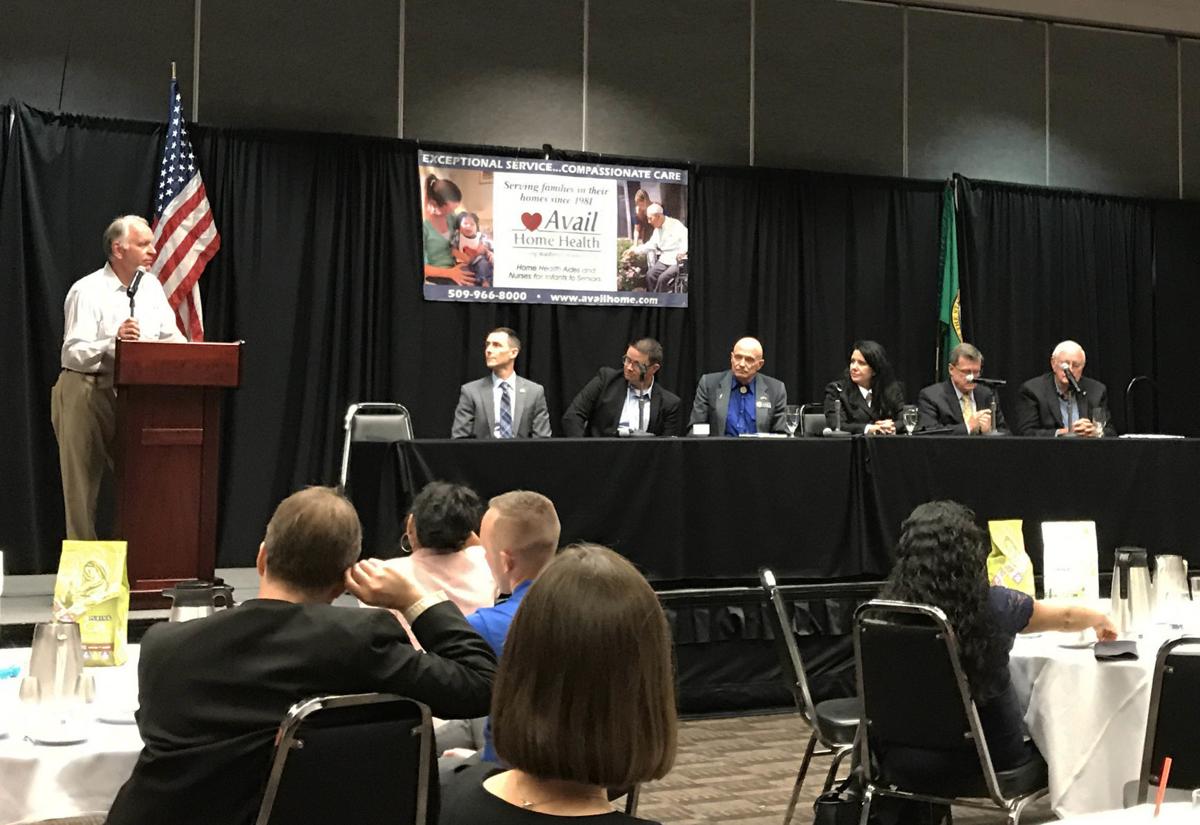 Editor's note: This caption has been updated to correct that Bob Gerst was at the lectern. 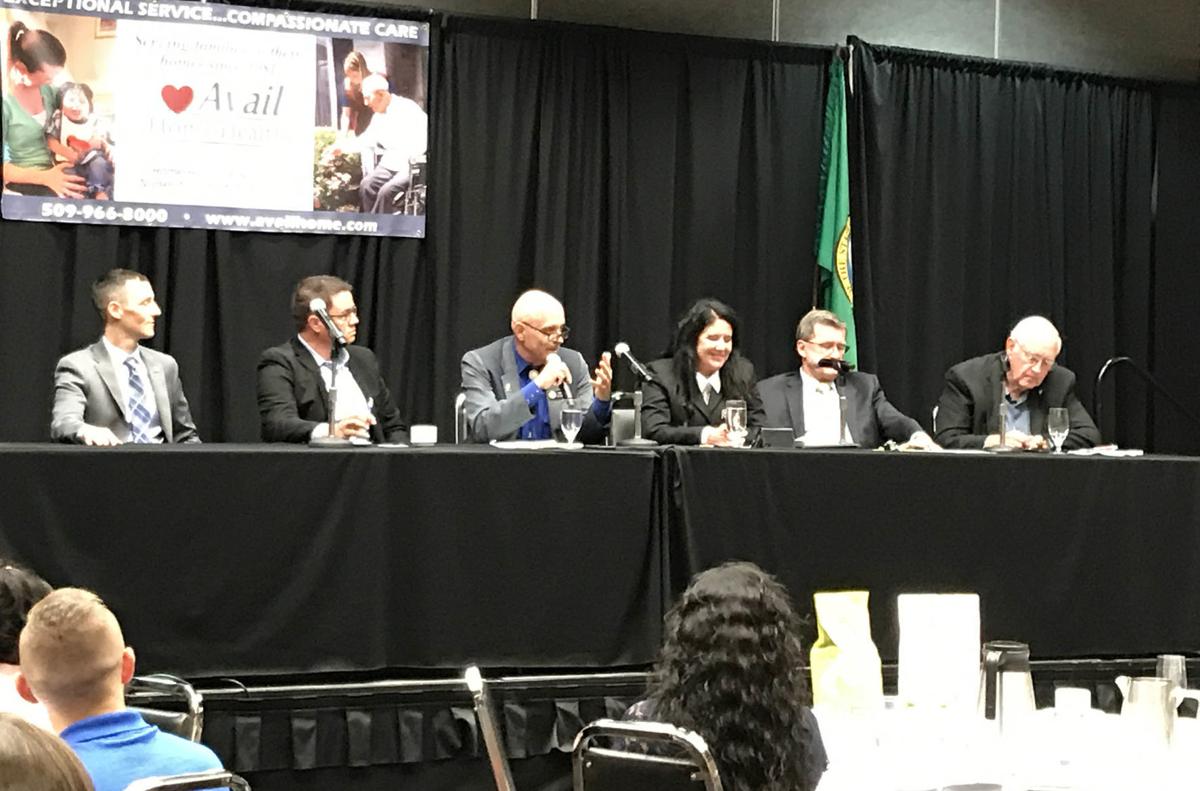 Editor's note: This caption has been updated to correct that Bob Gerst was at the lectern.

State lawmakers representing the Yakima area said they are keeping an eye on foster family shortages and proposed changes to state overtime rules during a Greater Yakima Chamber of Commerce luncheon on Wednesday.

Sens. Jim Honeyford of Sunnyside and Curtis King of Yakima, and Reps. Chris Corry of Yakima, Jeremie Dufault of Selah, Tom Dent of Moses Lake and Gina Mosbrucker of Goldendale, all Republicans, talked about the past legislative session and what’s ahead in 2020.

Mosbrucker and Dent said it was more difficult for Republicans to get things done this year with Democrats holding a 57-41 majority in the House and 28-21 majority in the Senate. When the Legislature isn’t in session, Dent says he invites Western Washington legislators to his home in the 13th District and tries to spend time with them in their home districts to build common ground.

Mosbrucker said it was “her fifth and least fun year of her dream job.”

“Many of these issues we talk about are not partisan, but become partisan on the hill and we’re always trying to undo that,” she said. “My belief is a balanced government is better.”

Corry said things may be more rocky next year with the departure of longtime House Speaker Frank Chopp, who held the position for 20 years. Chopp, a Seattle Democrat, was a “master of the process and getting coalitions” built, Corry said. The new speaker is Rep. Laurie Jinkins, a Tacoma Democrat.

Corry and Dent, who have experience as foster parents, mentioned a significant need in the state for more foster families. Dent said the state needs to do more to retain and build partnerships with foster parents.

“I view it as broken and we need some major fixing. We’re putting foster kids in motel rooms — that’s not working for me. And the excuses I’m getting from the new Department of Youth, Children and Families aren’t working for me,” he said.

Corry said officials are making strides to address the issues, and more foster parents are needed.

“I want those foster children who are in our care to not have additional trauma put on their lives so they can come out whole and complete,” he said. “I want to break that cycle — I want to get them out of the social welfare system. We know when they engage in it as a young child, they are more likely to engage in it as an adult.”

DCYF this week released a new plan to improve foster parent engagement through licensing, resources and communication. At the end of June 2018, the state had 5,109 licensed foster homes, a 3.1 percent increase from the prior year. The agency still needs thousands of homes for children, with the highest need for children and youth with intense behavioral needs, as well as homes for sibling groups and teens, the agency said in a news release.

Responding to an audience question, King and Honeyford said they don’t expect any changes to the $1.50 per hour increase in minimum wage set to go into effect in January.

Dufault said one thing people can do right now on wage issues is to comment on proposed changes to state overtime rules, which he described as a “backdoor minimum wage increase.” The proposal will increase salary thresholds, and restore overtime eligibility to more than 250,000 employees when fully implemented.

“That’s really going to impact our businesses, and it’s really under the radar. Here’s why: It didn’t come through as legislation, it came through as an agency change,” Dufault said.

Dufault said he plans to introduce legislation that would tie the overtime changes to geographic area and cost-of-living.

Jon DeVaney, who moderated the discussion, said the chamber board submitted a letter expressing concerns about the overtime changes last week to the state Department of Labor & Industries.

Honeyford said the state’s mental health system remains in a crisis. He said there’s new funding available, but it will take three to five years to get new treatment facilities built, and additional time to get a new teaching hospital for mental health up and running.

Dufault said one success story from the Yakima delegation this session was securing “last mile” funding for a new facility for homeless veterans at the former Yakima armory.

Lawmakers didn’t spend much time discussing the latest K-12 education funding changes in response to the state Supreme Court’s McCleary ruling, which found the state wasn’t adequately funding public schools. King said the Legislature’s decision to raise the local levy cap from $1.50 to $2.50 per $1,000 in assessed value this year wasn’t the best move.

“This in my opinion puts us back in the same boat we were in before McCleary,” he said. “It’s called McCleary 2, because I can tell you in a couple of years that’s where we’re going to be.”

Jennica Corry talks often to people who have considered becoming foster parents but haven’t for various reasons. They may worry about financia…