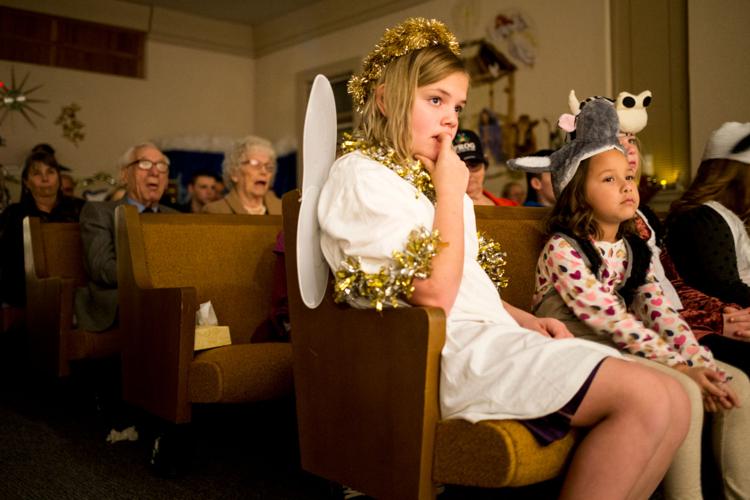 From right, Viviona Weishaar, 6, and Mystyc Lofgren, 11, get ready to go on stage for their performance as characters in a nativity play during a Christmas pageant at Note of Joy Christian Center in Yakima, Wash. on Sunday, Dec. 17, 2017. (JAKE PARRISH/Yakima Herald-Republic) 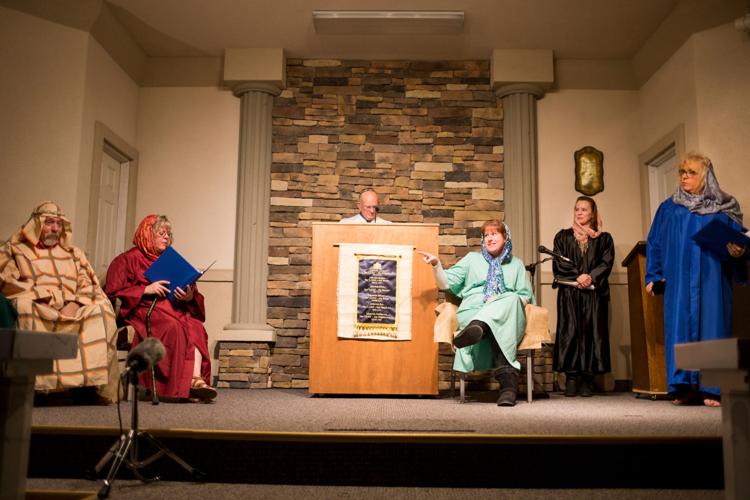 A courtroom scene from the play, "A Not-So-Silent Night" is showcased during a Christmas pageant at Note of Joy Christian Center in Yakima, Wash. on Sunday, Dec. 17, 2017. (JAKE PARRISH/Yakima Herald-Republic) 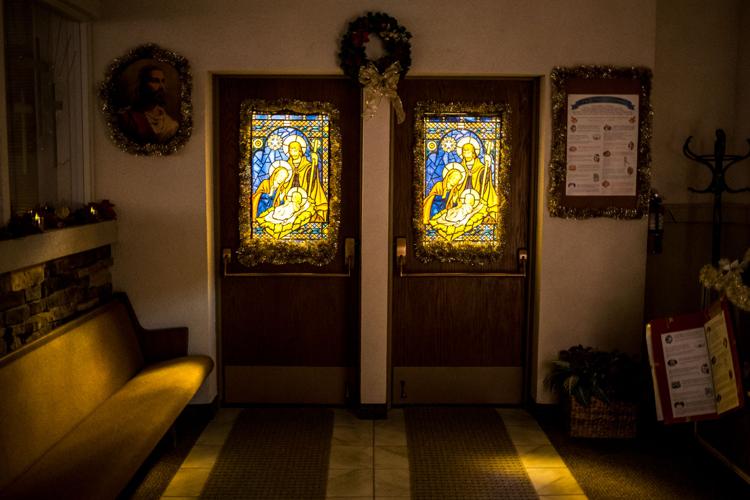 The front doors to the Note of Joy Christian Center in Yakima, Wash. are decorated on Sunday, Dec. 17, 2017. (JAKE PARRISH/Yakima Herald-Republic)

From right, Viviona Weishaar, 6, and Mystyc Lofgren, 11, get ready to go on stage for their performance as characters in a nativity play during a Christmas pageant at Note of Joy Christian Center in Yakima, Wash. on Sunday, Dec. 17, 2017. (JAKE PARRISH/Yakima Herald-Republic)

A courtroom scene from the play, "A Not-So-Silent Night" is showcased during a Christmas pageant at Note of Joy Christian Center in Yakima, Wash. on Sunday, Dec. 17, 2017. (JAKE PARRISH/Yakima Herald-Republic)

The front doors to the Note of Joy Christian Center in Yakima, Wash. are decorated on Sunday, Dec. 17, 2017. (JAKE PARRISH/Yakima Herald-Republic)

YAKIMA, Wash. — Advent candles, nativity scenes, shining stars — this is a season of joyous celebration and spiritual reflection, when churches reach out to their neighbors, to those in need and to the community in general.

Many local churches perform outreach all year long in small and large ways. But Christmastime often brings out the urge to do more, to share good fortune with others.

For churches, that sometimes means inviting the community to a holiday pageant. Many of the region’s churches do that, whether it’s geared for children or adults.

Note of Joy Christian Center, at 305 E. R St. in Yakima, recently presented an evening for children and adults with the goal of reaching out to the community.

“We enjoy having everyone participate in Christmas activities,” Pastor Curtis Skidmore explained. “This is a big time of year.”

The congregation pulled out all the stops, hosting the 10th annual “Night In Bethlehem.” The evening began with a children’s presentation of a traditional English Christmas carol, dressed as doves and sheep, followed by adults performing a satire called “A Not-So-Silent Night.”

Church members also re-created the town of Bethlehem, designing a street bazaar with a carpenter shop, bakery and manger filled with people in costume.

“In celebrating the birth of Christ, we incorporate as many people as we can,” Skidmore said.

Members of West Side Church, 6901 Summitview Ave., Yakima, also embrace their neighbors at Christmas, particularly inviting families to join them at the 4 p.m. Christmas Eve service performed by preschoolers through fifth-graders. They tell the Christmas story, wearing costumes and reciting Scripture.

In her second year heading the pageant, Godoy has been joined by Samara Wasson, assistant children’s ministry director, in producing the service.

Children will play multiple roles, depending on their ages; the youngest will be wearing animal costumes and appear around the manger. Older ones will portray shepherds and serve as narrators.

Godoy said that many people who don’t ordinarily attend West Side come for the children’s service. “It’s family oriented, so we reach out,” she said. “It truly is one of the most well-attended services because it meets the need of families.”

On the upper end of the youth spectrum at West Side, middle and high school students delved into a project to help others during the holidays.

Youth groups convened at the church one recent Sunday afternoon to cook a meal to be served at Rod’s House, the drop-in center for homeless youths in downtown Yakima.

Congregants at Central Lutheran Church, 1604 W. Yakima Ave., Yakima, take on at least two extra projects during the Christmas season. For the past several years, members have participated in bell ringing to benefit the Salvation Army. This year adult church members and youths covered a six-hour shift one Saturday, taking turns ringing the bell next to the collection kettle in front of a local store. Carolers sang and a band from the church played bluegrass music as a backdrop.

“When people hear the music, they always come up and listen, and there are even grandmothers dancing with their grandkids. It’s very nice,” she said.

Felicity Pittman, director of youth and family ministry at Central Lutheran, accompanied members of the youth group on their bell-ringing shift as part of the group’s overall ethos of service. Members have made cookies for Habitat for Humanity events, raked leaves for elderly people and performed other service projects.

“Focusing on others is especially important at this time of year,” Pittman said.

In addition, every year for the past two decades Central Lutheran members have participated in Christmastime shopping trips with children to buy clothes in Project 300, a program through the local Salvation Army.

Counselors from elementary schools recommend needy children to the Salvation Army, which then pairs them with individuals from churches and other organizations. Children and adults are bused to a local store, where they have a budget of $75 per child for shoes and clothes. This year some 300 volunteers took 366 children shopping, the Salvation Army’s Lt. Pauline Helms reported.

Umbarger coordinated the program for her church, where members either sponsored a child with a donation or spent a morning shopping with a child.

“Its very rewarding,” Umbarger said. “The children are beautiful — beautiful, and polite and very grateful. There’s nothing like it. We get so much more out of it than we put in.”

Umbarger noted that her church, as well as many others, emphasizes trying to better the community.

“It’s hard to watch the news and see helpless children in other parts of the world,” she said. “But you can make a difference in your own corner of the world.”