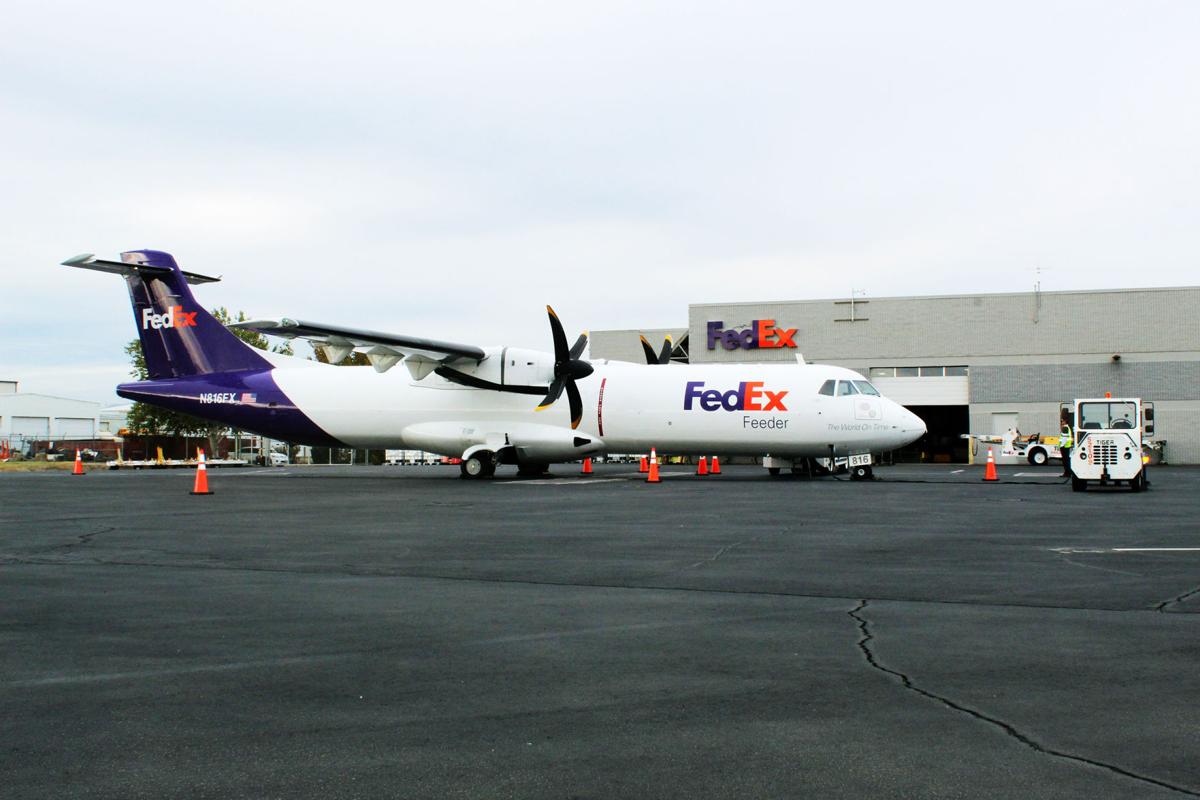 A FedEx aircraft pulls up to the company’s sorting facility Sept. 29, 2021, at the Yakima Air Terminal. FedEx is one of several shipping companies that deliver freight through the Yakima airport. 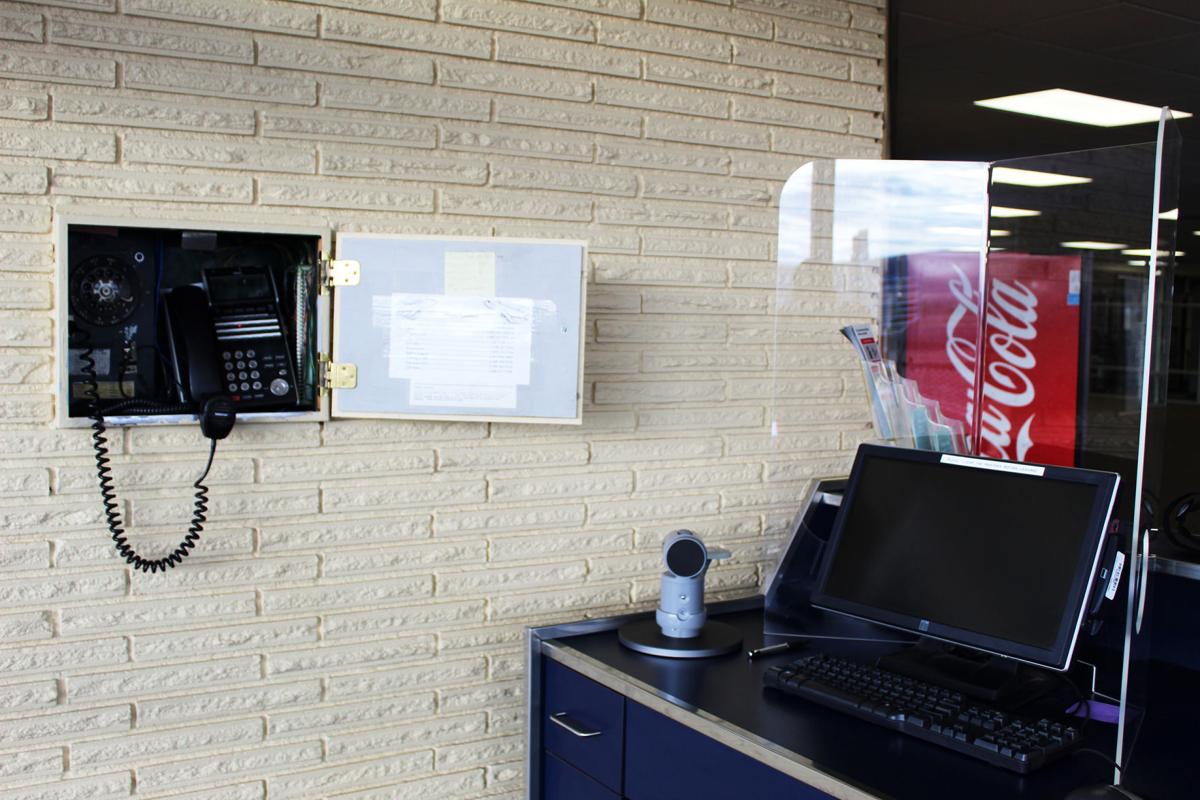 The Yakima Air Terminal’s main passenger terminal dates to the 1950s, and that age is reflected in the changing methods of communication visible at the facility’s passenger boarding gate — everything from a rotary telephone (at left) to a modern boarding pass reader (next to the computer). 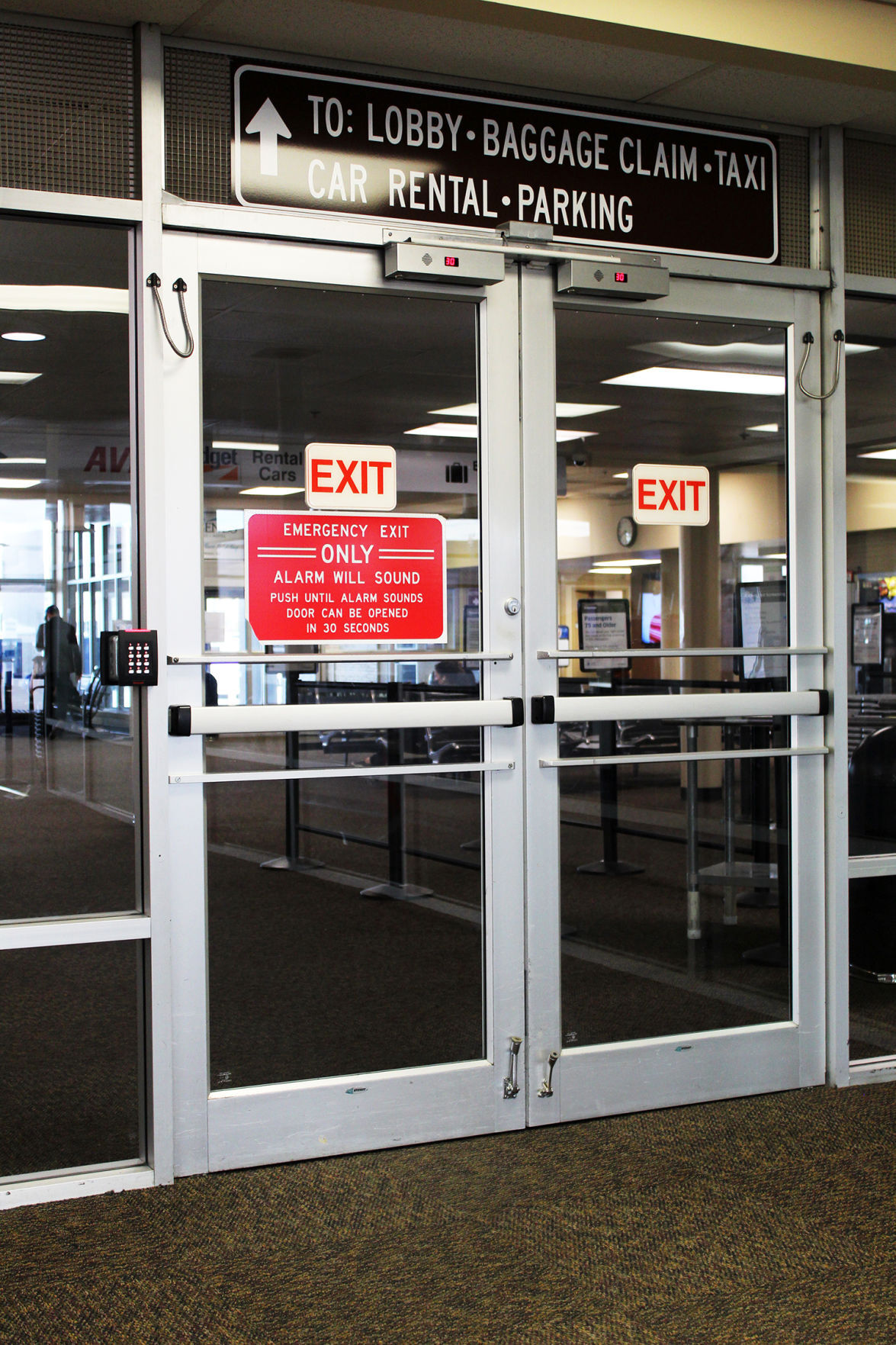 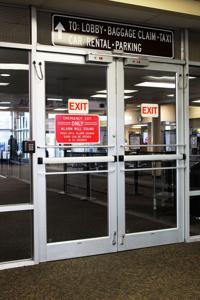 An automated exit lane system will replace these security doors at the Yakima airport’s passenger terminal.

A FedEx aircraft pulls up to the company’s sorting facility Sept. 29, 2021, at the Yakima Air Terminal. FedEx is one of several shipping companies that deliver freight through the Yakima airport.

The Yakima Air Terminal’s main passenger terminal dates to the 1950s, and that age is reflected in the changing methods of communication visible at the facility’s passenger boarding gate — everything from a rotary telephone (at left) to a modern boarding pass reader (next to the computer).

An automated exit lane system will replace these security doors at the Yakima airport’s passenger terminal.

YAKIMA – There are two things the updated Yakima Air Terminal master plan makes clear. First, the number of passengers should continue to grow over the next 20 years.

And just as important: There’s much more to the Yakima airport than passenger travel.

“I think it’s important the community knows that we’re not only a hub for passengers, we’re an economic engine for the region,” Peterson said.

He pointed to a 2020 study by the Washington State Department of Transportation on the economic impact of the state’s public airports, which found the Yakima Air Terminal is directly or indirectly responsible for 2,364 jobs and $591,034,000 in business revenue annually.

“If you take a look at the local region, the people who work here, who visit here, who come here for their business … and you take a look what goods they purchase within the region, that’s how they came up with $581 million,” Peterson said. “You’re talking about fuel, groceries, cars, housing – it all has a trickle-down affect on the economy. We are an economic engine for the region, and a lot of people don’t realize that.”

The new master plan, approved Sept. 21 by the Yakima City Council, updates facility requirements and projects operations at the airport through 2040.

This increase in freight delivery (both inbound and outbound) and corporate aviation is reflected by the increase in private hangars housing aircraft at the Yakima airport. There were 131 aircraft based at the Yakima Air Terminal in 2018, and 173 are predicted in 2040.

“A lot of businesses, such as large fruit manufacturing companies, house their private jets here,” Peterson said. “They house private helicopters here to conduct business … Sometimes they’re flying out to clients, marketing their business, then flying back, instead of taking all day to drive there and back.”

Another reason for a recent increase in airport operations has been state and national agencies using helicopters and other aircraft to fight wildfires. These aircraft transport firefighting personnel and haul supplies, water and fire retardant.

“There’s a huge responsibility for the airport to provide those services, these grounds, to help fight the fires when we have an active wildfire season. Unfortunately, we’ve seen that quite a bit the past few years,” Peterson said.

Physical improvements to the airport already have begun. The west end of the general aviation apron was rehabilitated in 2019, and the east end will be completed in the spring and summer of 2022.

A taxi lane to accommodate additional hangars on the south side of the airport property is the next project on deck, followed by a major capital improvement to the passenger terminal, scheduled from 2025 to 2028, Peterson said.

While private aircraft, cargo deliveries and on-site businesses such as the FedEx sorting terminal are vital to the airport's future, so are passengers flying to and from SeaTac.

Alaska Airlines briefly added a third daily flight to and from Seattle during September, although that was scaled back to two flights this month due to an industry-wide pilot shortage, Peterson said.

Previous surveys of Yakima air travelers indicate the limited number of daily flights – and the ensuing long waits for connections at SeaTac – are the primary reason 80% of those travelers make the 150-mile drive over Snoqualmie Pass.

“Here’s something we proved back in 2014, in 2016: The more passengers who ride on that airline, the more flights they’re going to add to that route,” Peterson said. “In 2014-16, Alaska went from three to four flights a day, and that reduced the connection times, the time you had to sit in Seattle.

“It’s kind of one of those cart-before-the-horse situations where if you prove there is demand, the airline is going to throw that additional flight in there.”

In the long run, if Yakima travelers take advantage of the convenient parking, short security lines and lack of winter driving adventure, direct flights to other regional cities might be possible, Peterson said.

“We are slated to witness an increase in passenger ridership,” Peterson said. “We want to make sure we can identify additional frequencies to Seattle, which is our No. 1 priority for service according to the community. And eventually, look for alternate destinations out of Yakima.”

YAKIMA – An automated exit security lane system will be installed within the next three to four months at the Yakima Air Terminal.

The Yakima City Council voted Sept. 21 to purchase the exit system for $99,636 from Record-USA, a North Carolina company that specializes in airport security doors. It has three sets of doors which open automatically to allow arriving passengers to securely enter the public area of the terminal.

“Right now, everyone’s crowded at the door, trying to exit, all 73 passengers off the airplane at the same time,” Peterson said. “This is going to systematically flow people through the area, to minimize security risks, and also reduce the potential spread of the (COVID-19) virus.”

The equipment is expected to be delivered within the next three months, Peterson said, with installation happening early next year. The total cost of equipment and installation is estimated at $130,000.

The city of Yakima will pursue a grant that could fund alternative energy projects at the Yakima Air Terminal, City Council members decided Tuesday.