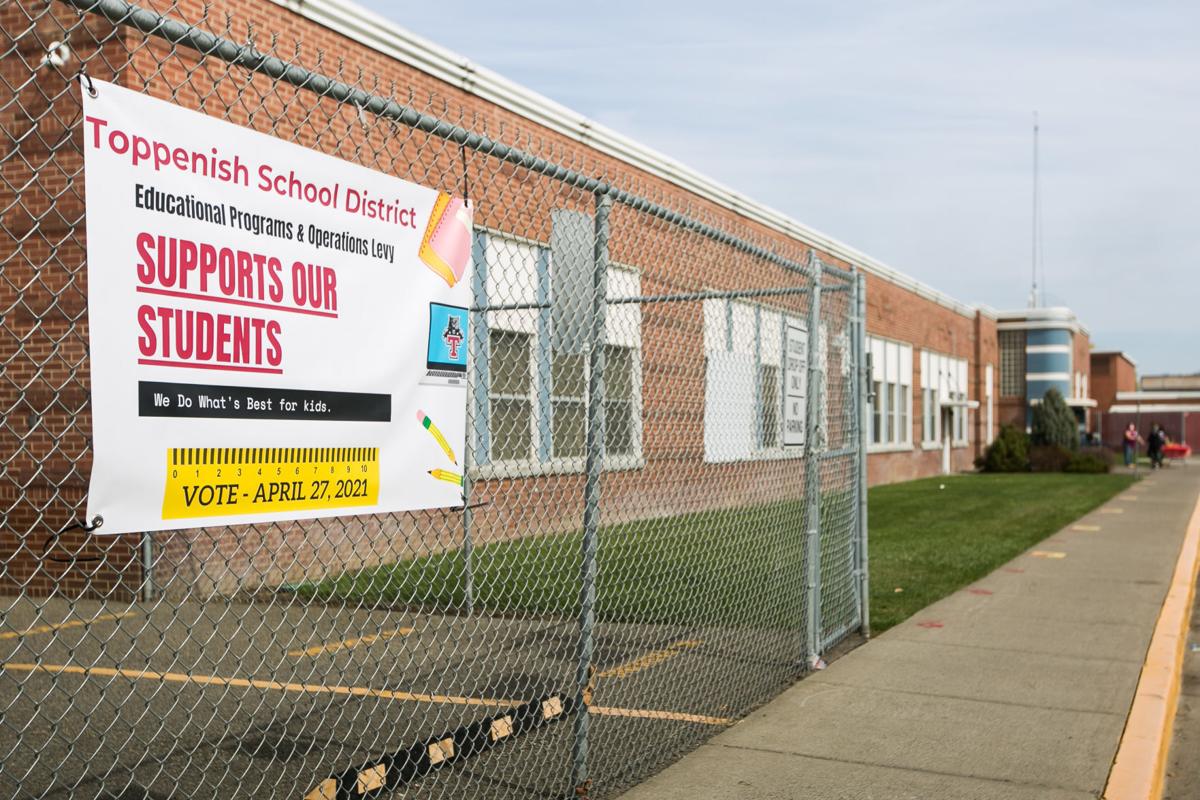 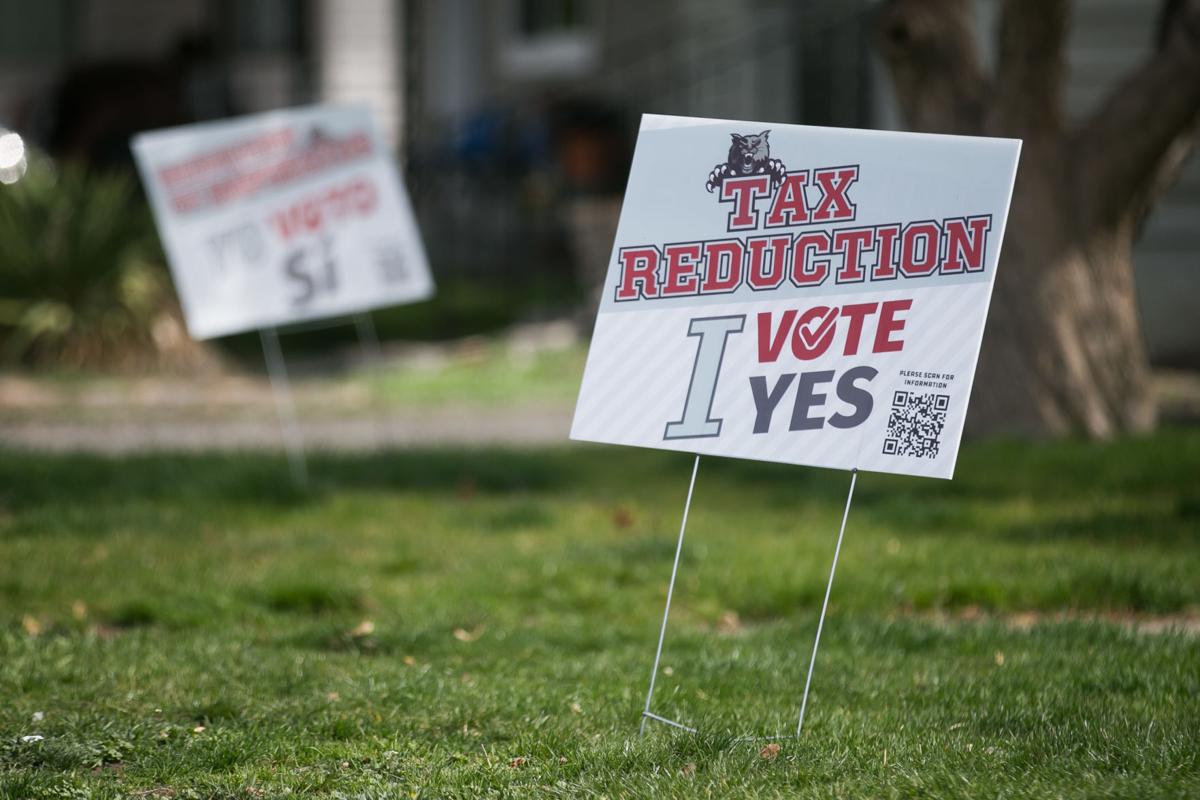 A lawn sign which bears the inscription “ Tax Reduction, I Vote Yes” is photographed Friday, April 2, 2021, on South Walnut Street in Toppenish, Wash.

A lawn sign which bears the inscription “ Tax Reduction, I Vote Yes” is photographed Friday, April 2, 2021, on South Walnut Street in Toppenish, Wash.

Voters in Selah and Toppenish will soon receive April ballots to decide whether to renew school operation levies.

Ballots will be mailed April 9 and must be returned by 8 p.m. April 27. Results will be certified on May 7.

In Selah, all sports are funded by the levy, as well as all technology, safety, instructional materials and more, according to Superintendent Shane Backlund.

Selah previously asked voters to renew the school levy in February. It fell short of the 50% plus one required to pass, with 47.2% votes in favor. The cost to voters was lowered and it’s been placed back on the ballot. This is Selah’s second and final opportunity to secure the vote this year. Toppenish’s measure is on the ballot for the first time.

Both districts say approving their respective bonds would ensure local voters’ state taxes would return to their own community, instead of Olympia, and maintain programs the districts and communities can’t afford to lose.

In Selah, a nearly $7.7 million, two-year levy renewal pitched in February has been reduced to $7.45 million over two years for its April ballot appearance. The levy would be matched with state funds.

The adjusted levy amount is estimated to cost voters $1.50 per $1,000 property value, compared to $1.55 pitched in February. Backlund said this is significant because it is the lowest rate the district can bring in without decreasing the amount of state matching funds brought in by the district. If it’s not approved, local taxpayers are “giving money to Olympia and not getting it back,” Backlund said of state school taxes.

Voter turnout in February was low among people under 40, which includes district parents, he said.

“So we’re trying to be more targeted with our community and really answer the questions we heard come up from the last election,” he said.

The district has received questions about federal COVID-19 relief funds, how they were used and whether the levy is necessary. Backlund said it is.

He said in spring 2020, the district received over $600,000, which has been nearly entirely depleted by costs for things like personal protective equipment, additional technology and paying staff throughout the summer to provide youth meals. An anticipated $2.2 million in additional relief funds that can be spent through 2023 will help offset a decline in transportation funds and revenue loss from a 145-student decline in enrollment this school year. That’s significant since staffing is determined by enrollment projections before the start of the school year.

The funds also will be used to help students make up for learning loss during the pandemic, he said. The district is planning “robust summer learning this year and next, and extended learning opportunities” next school year.

The existing operations levy funds also were used to pay staff throughout the pandemic and avoid layoffs. Staff provided academic services remotely, technology or food services, and child care for first responders early in the pandemic using these funds — services he said looked different from a normal school year, but were important to the community.

The district also pushed for students to return to campus early on this school year, and has had a significant portion of its student body receiving some in-person instruction since October, he said. The district did see some small savings from the existing levy from not having students full time on campus, Backlund said. That came to about $400,000 less than what the district expected to spend this school year than it’s actual spending — a far cry from the $6 million brought in by local levy and state matching funds.

Without the levy, programs like Selah athletics would be unfunded.

The district is working to answer community questions about the levy, said Backlund, including sharing information online as concerns arise.

“We’re just trying to really answer the questions that are out there,” he said.

Toppenish is asking voters to approve a four-year, $8.9 million levy that would be matched with about $24 million in state funds over the same period, Cerna said. The annual levy amount increases gradually from $1.42 million to $1.54 million over the four years, but is pitched to cost voters $2 per $1,000 property value under the premise that property value increases over time.

Voters approve levy amounts, not rates, which are estimates.

The school district is pitching the levy as a tax-saving measure.

Here’s how he says that would work:

As it stands, he said, voters in Toppenish pay three local school taxes:

If voters approve the renewal of the operation levy, Cerna said that would bring in over $6 million in state matching funds annually. The district would use $2 million of that each year to pay toward the school bond — slashing that $2.48 per $1,000 property value down to about 45 cents, while bringing locally paid state schools taxes back to Toppenish through matching funds.

If the levy renewal is not approved, Cerna said the district will have to slice staffing and key programs, while taxpayers will pay more than they would be expected to if they approve the levy renewal. That would be a combined rate of about $4.91 per $100,000 for the existing bond and capital levy as opposed to the estimated $4.88 across all three after the $2 million annual contribution by the school district of state matching funds.

Cerna said approving the operations levy is a way to bring in funds that would otherwise go to Olympia from state school taxes and to reduce the tax burden for Toppenish community members. While the explanation is complex, he said the result would be the district thanking the community for its long-lasting investment in the school district.

All levy rates are estimates based on levy amounts approved by voters. They are certified by the County Assessor’s Office each year based on assessed property value within an area.