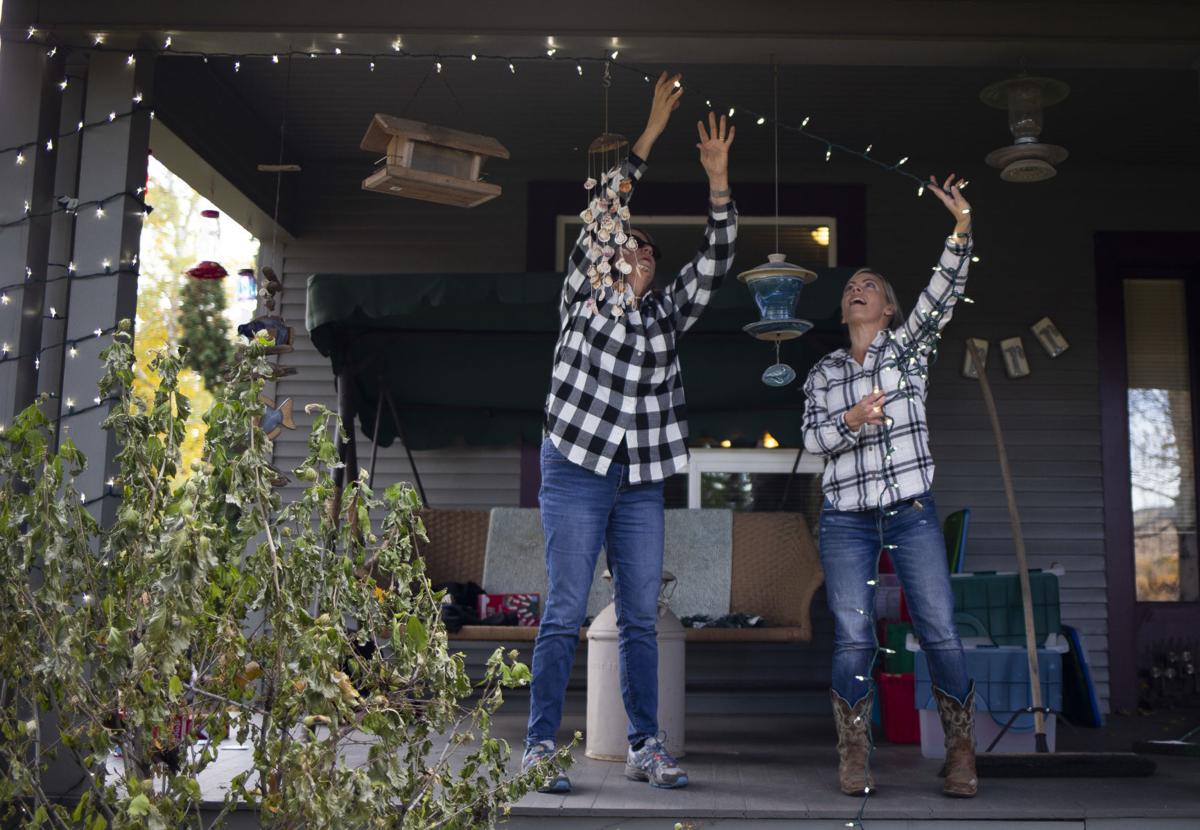 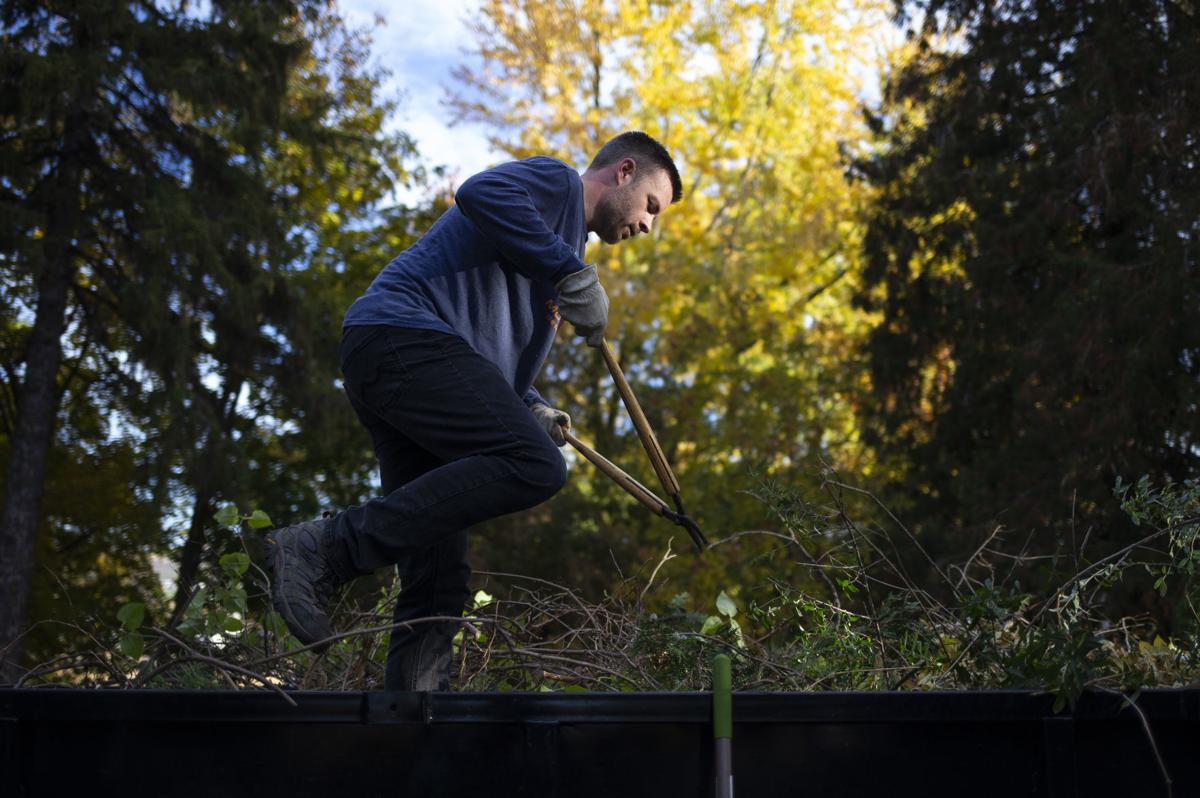 Josh Phillips, Perry Tech IT director, breaks down branches and other yard debris in the back of a trailer on Lori and Jeanine Benoit’s property. 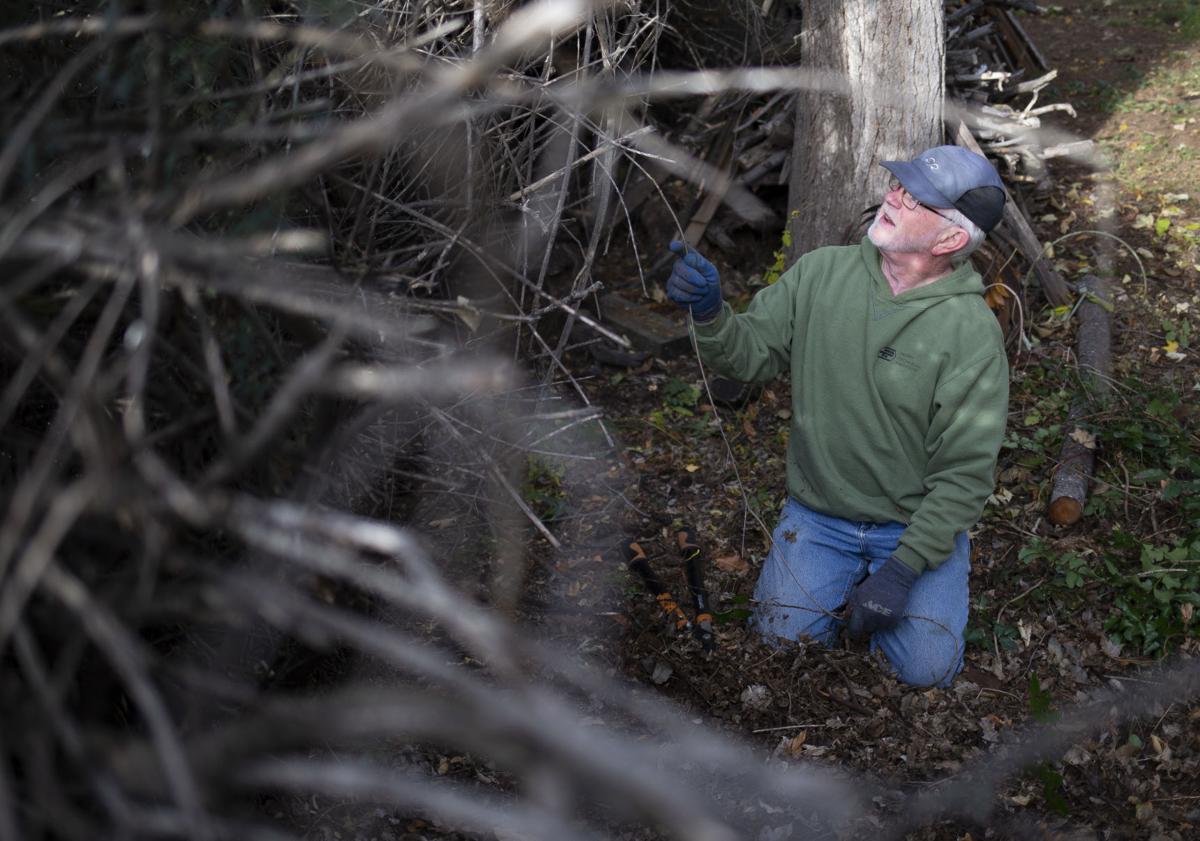 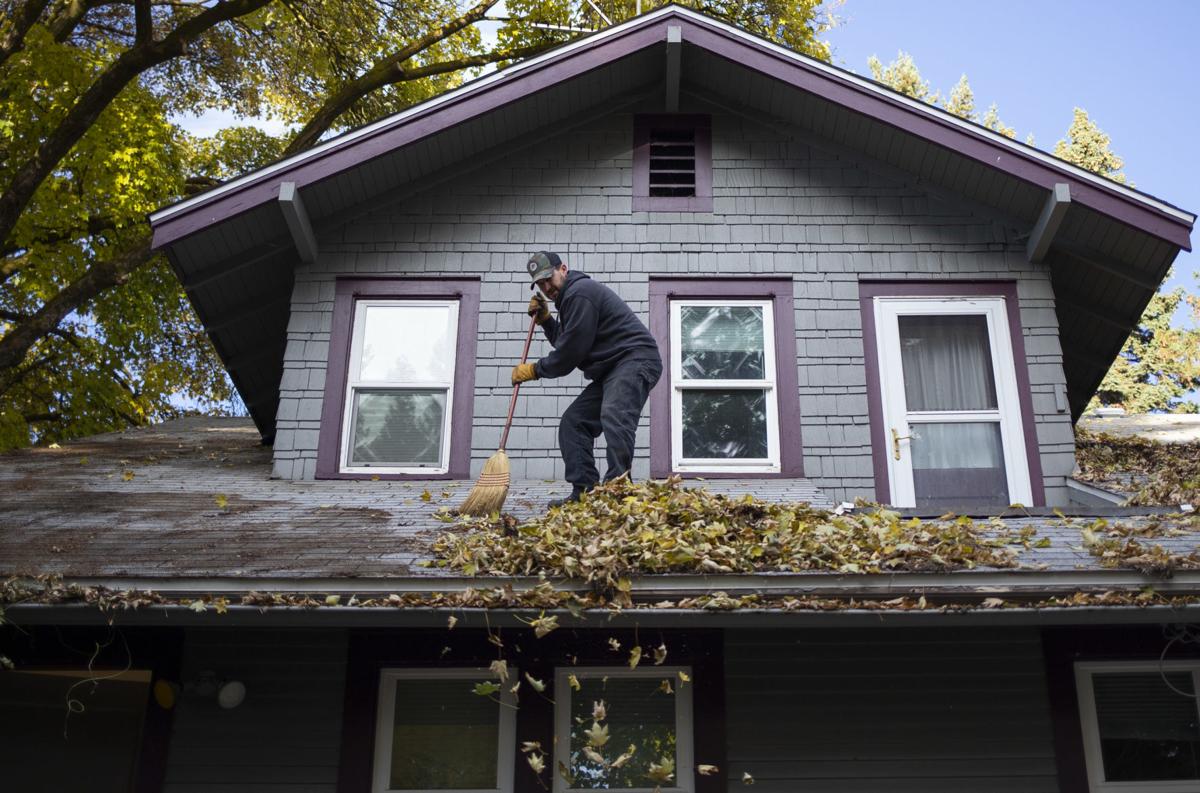 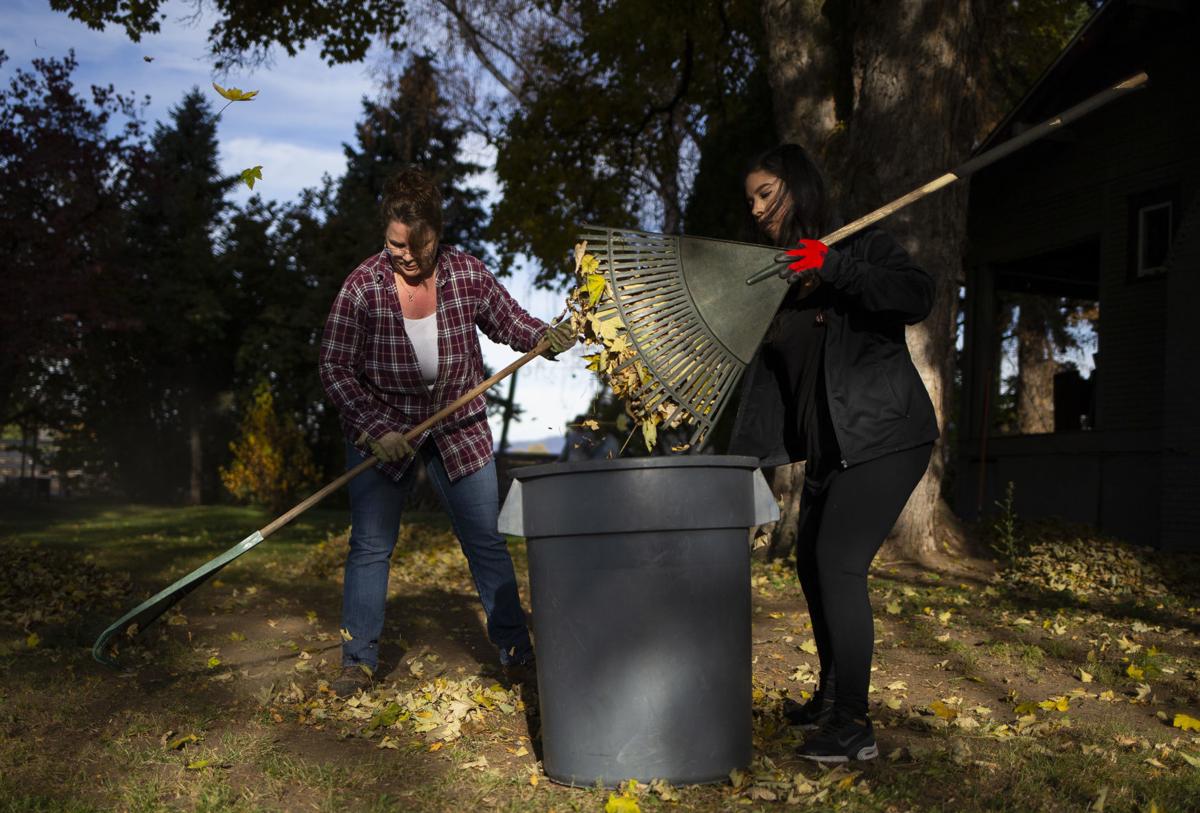 Josh Phillips, Perry Tech IT director, breaks down branches and other yard debris in the back of a trailer on Lori and Jeanine Benoit’s property.

Lori Benoit, a teacher at Eisenhower High School, talks a lot with her students about what she calls “relationship deposits.”

She likens them to savings deposits at a bank: You put money into an account, you might not need or use it right away, but it’s there for when you do need to withdraw it. She tells her students to always be kind to others, to help where they can, to invest in people because they might not need the positive connections at the time, but they’ll be there for “withdrawals” in the future.

This fall, the blessing for the Benoits started with a text — a message that ended with “Please let us help.”

Lori would tell you that she is a strong, independent woman. So is her wife, Jeanine. The couple live on a 2-acre property out toward Naches and are used to doing things for themselves, including heavy-duty yard work. But when Jeanine was diagnosed with Stage 4 pancreatic cancer in June, keeping up appearances was the least of Lori’s concerns.

“With treatment and travel, we have been unable to care for anything but the necessities,” Lori said. “As we live in a huge old farmhouse, it is a lot of work for two women.”

Leaves started piling up in the yard and in the house’s gutters, while the Benoits drove to chemotherapy appointments. The lawn, which needed to be mowed, had to wait. So did needed farmhouse repairs and the winterizing measures Lori normally started in the summer.

Christine Cote, the president of Perry Technical Institute, heard about the Benoits’ situation. Jeanine retired from teaching information technology at Perry Tech this year, and Cote said she was a good employee and a good friend.

She decided to reach out.

“A bunch of Perry peeps want to do something,” Cote texted Lori. “Anything. I thought we could winterize your yard, sprinklers, etc, or anything you need. Please let us help.”

Lori said the last line of that text — Please let us help — broke down any reservations she might have had. The Benoits said yes.

Both were visibly emotional on Oct. 25, when a crew of about 25 Perry Tech staff and faculty members showed up at the farmhouse, toting lawn mowers and weed wackers, rakes and heavy-duty gloves, a dumpster and even a string of white Christmas lights to hang from the porch, to make the Benoits’ world a little brighter.

Jeanine Benoit, sitting inside a warm room in the farmhouse with the couple’s two dogs, said she has felt overwhelmed and humbled by the unexpected kindness.

“To see people keep getting out of their cars and grabbing tools to help … who does that happen to?” She paused, her green eyes misty under a lily-colored knit cap. “Apparently it happens to me.”

For Carol Helms, Perry Tech’s human resources director who was helping that Friday, the blessing was the chance to give back.

“Jeanine is so down to earth, caring, and welcoming to all. She would have been the first person to volunteer for something like this,” Helms said. “We all wanted to do something to help, and it feels good to be able to give back in a way that’s meaningful to her.”

By 9:30 a.m., Jason Lamiquiz, Perry Tech’s associate dean of education, was on the roof of the farmhouse, unclogging the gutters of leaf litter and debris. He climbed down for his interview, saying with a smile that Jeanine was one of the first people he met when he started working at the institute about 10 years ago.

Lamiquiz, like several other Perry Tech faculty, first acknowledged Jeanine’s “wicked” sense of humor, followed by her care and commitment to the institute’s students. Lamiquiz recalled that Jeanine owned a Pontiac Firebird during her teaching days and she would let the students in the automotive program restore it.

“Those students loved working on that classic car,” he said. “That really shows you the kind of person she is.”

Jeanine first came to Perry Tech as a student, when she was 42. She had spent more than 20 years working at her father’s grocery store and, upon his retirement, decided she wanted a change. She toured Perry Tech and decided the information technology program was perfect for her.

“I wanted something that would keep me learning and growing for the rest of my life,” she said. “It was the direction the world was going, and I was intrigued that it was a male-dominated field. It inspired me and made me want to get some women out in the field.”

After graduating from the two-year program, Jeanine worked at Yakima Valley College, then in the Yakima School District as a computer repair teacher at Davis and Eisenhower high schools. She then rejoined Perry Tech, first as a network administrator and then as an IT instructor.

Her appreciation of the institute that had let her pursue new dreams, while in her 40s, grew with her experiences as a faculty member there.

“It’s a great place,” Jeanine said. “The certificate you get out of Perry Tech will give you a career path for the rest of your life, if you choose to use it. You follow your heart and your path, and you can’t go wrong.”

Jeanine retired in January. In February, she told Lori something was wrong. Lori remembered, “She was sitting in her chair, and she said, ‘Lori, something is wrong with me. I have everything I want, and I can’t get out of this chair.”

Trips to the hospital, an ultrasound and a CT scan later, doctors informed the couple, on June 14, of the mass they had found and the diagnosis of pancreatic cancer. Jeanine has since completed four rounds of chemotherapy. She’ll go in for another CT scan in November.

“It was a hard conversation coming home,” Lori said of the initial diagnosis. “We had read about it and we knew the odds were against us. It’s still something we’re processing.”

The women are also still processing the unexpected help from Perry Tech staff, who by the end of the afternoon had removed leaf litter and debris, mowed the lawn, painted the steps and railings leading to the farmhouse’s front and back porches, pruned and trimmed trees, and repaired a fence and patio cover with wind damage.

Cote said the number of Perry Tech faculty who wanted to help one of their own through a hard time made her proud of the institute’s faculty for reasons beyond their commitment to students. When she reached out to see if anyone wanted to help with yard work for the Benoits, she said the response was tremendous.

“It’s hard to know what to do, but when Lori gave me a list, I realized these projects were doable, and there were so many who wanted to help,” she said. “It helped all of us to be able to help them.”

Lamiquiz noted Yakima-based Helliesen Lumber and Supply Co. also was touched by Jeanine’s situation and volunteered to donate lumber for the fence repairs.

“It’s really neat to see others step up and help when people in the community have needs,” he said. “That’s what makes and keeps our communities strong, and it’s important because so many people are afraid to ask for help.”

Lori Benoit said that Perry Tech’s help has served as a key reminder of the power of building positive relationships.

“It’s never been so clear to me as now, since Jeanine has been sick, that she clearly has made some great deposits in her time,” Lori said. “We’ve spent a lot of our time looking for silver linings, and this is one.”

Cote said she heard from several Perry Tech staff members following the first cleanup, who told her, “If you decide to do this again, count me in.” The team plans to return to the farmhouse as needed, given that leaves are still falling and the desire to help someone who gave so much remains strong, she said.

“The road ahead is not going to be easy for them, and we want them to know we care,” she said. “We will be there for them. The road doesn’t end here.”