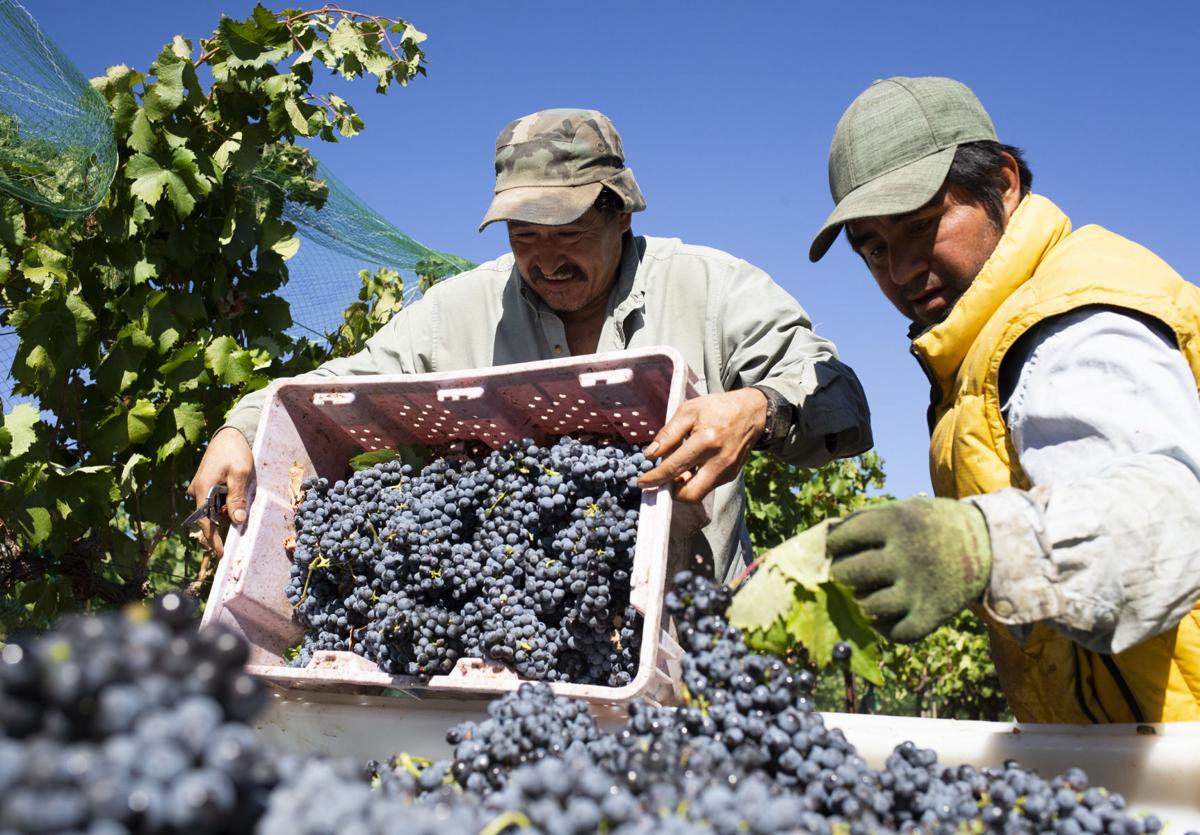 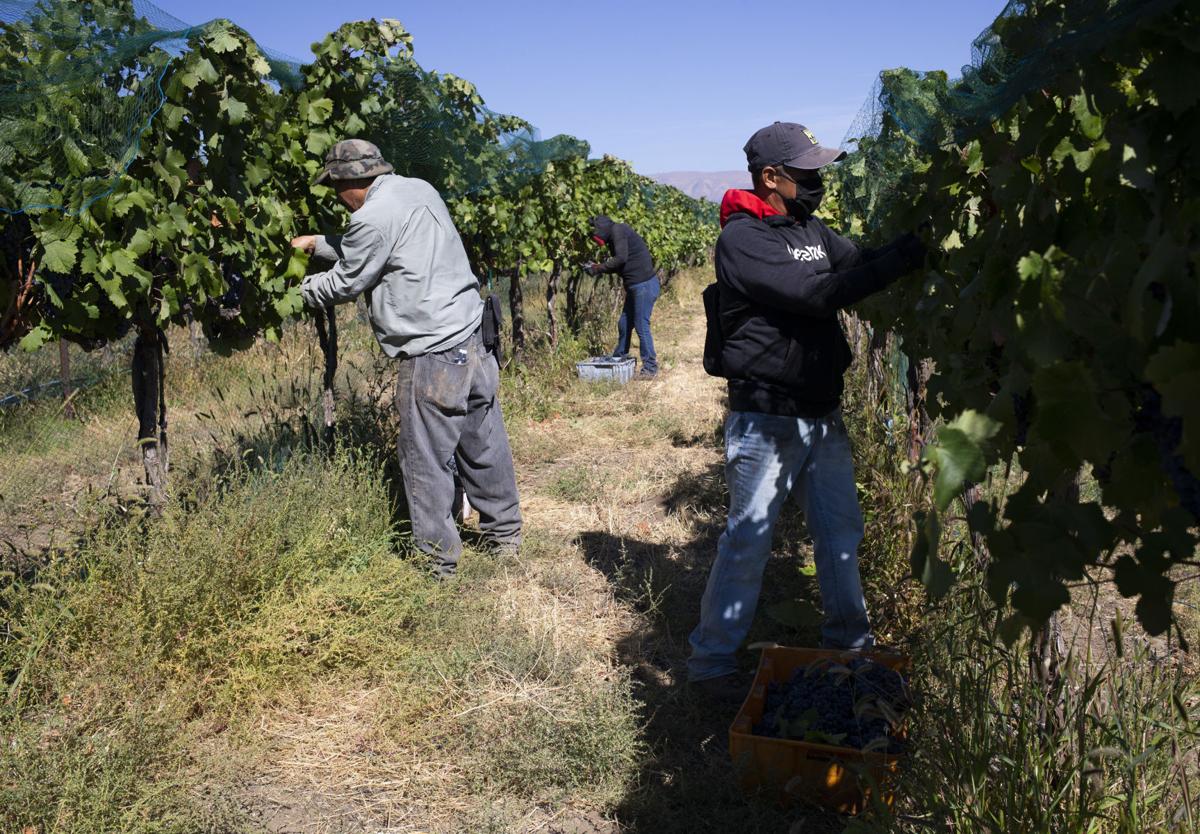 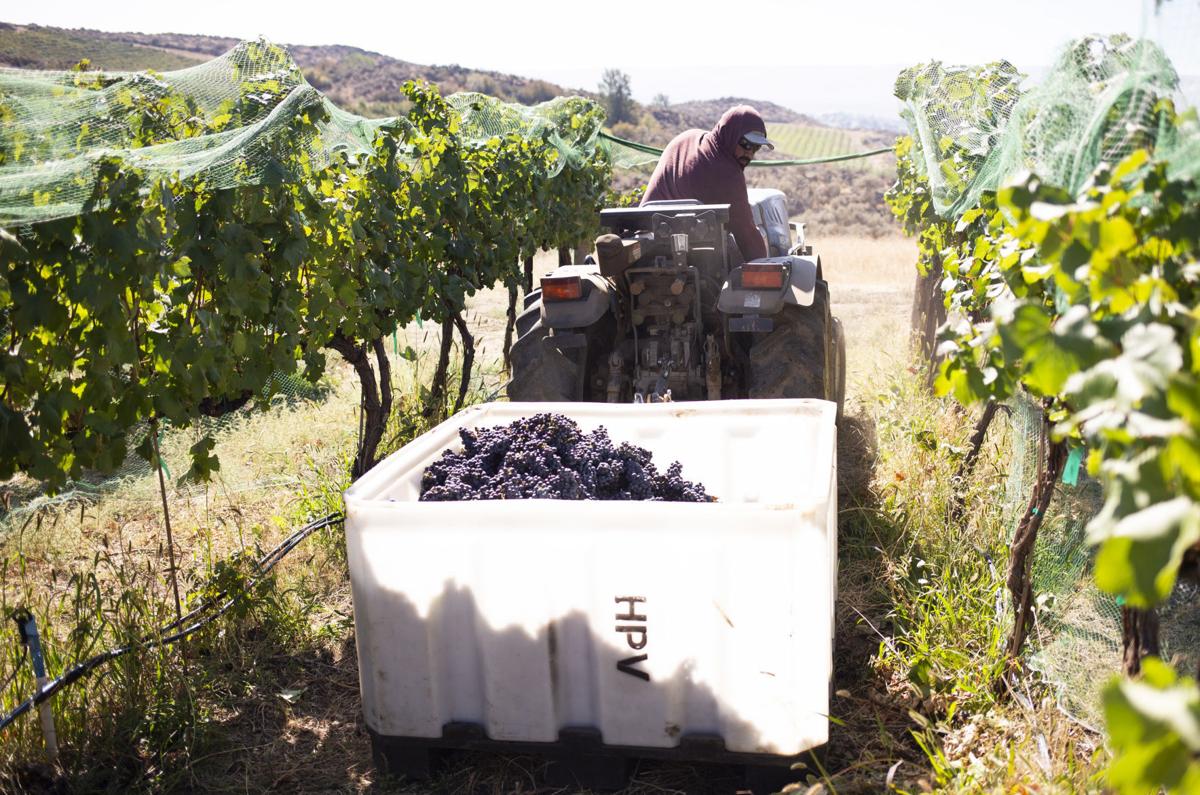 A worker moves a bin of Graciano grapes during harvest Thursday, Sept. 23, 2021, at Strand Vineyard in Cowiche, Wash. 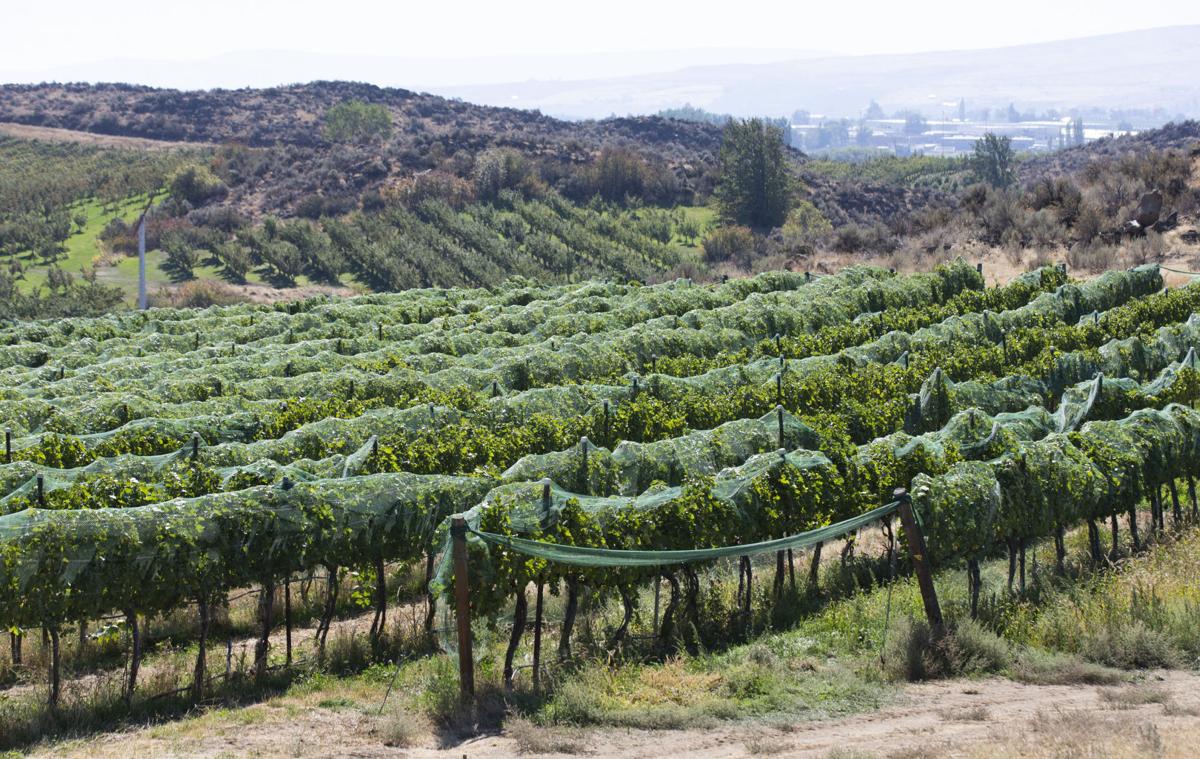 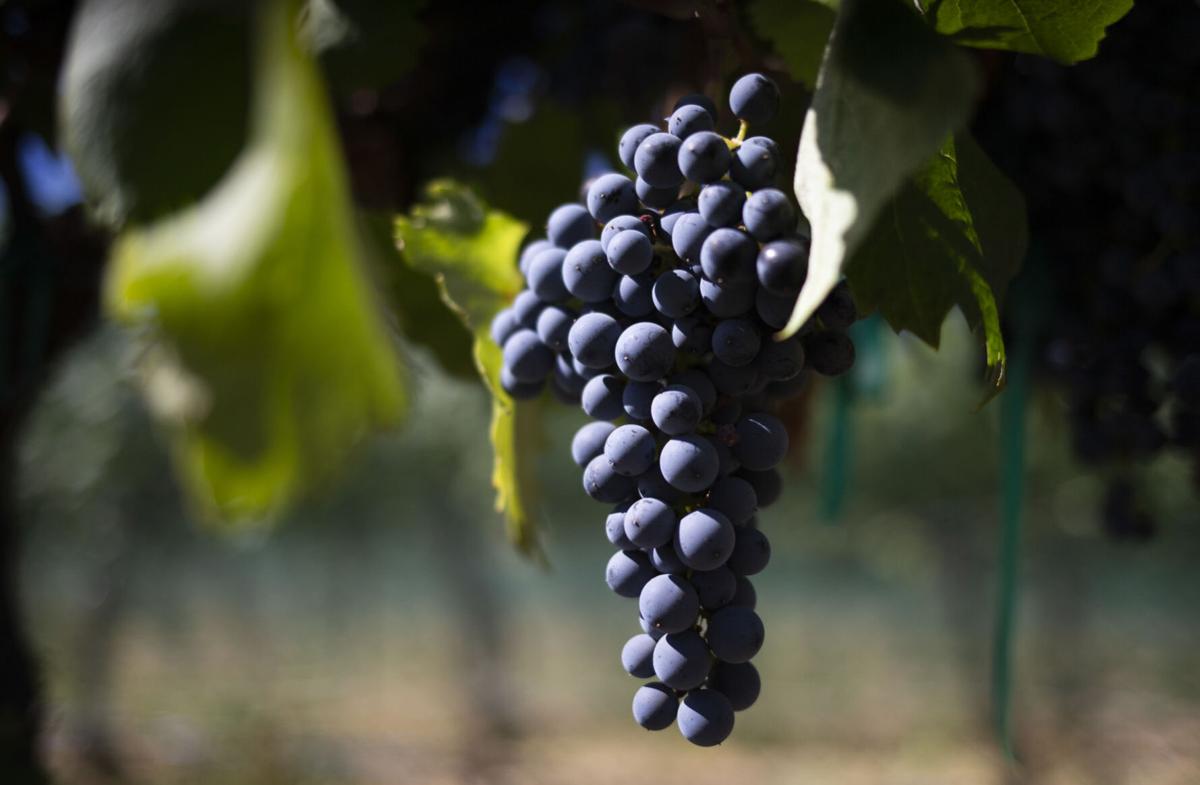 A bunch of Graciano grapes hang during harvest Thursday, Sept. 23, 2021, at Strand Vineyard in Cowiche, Wash. 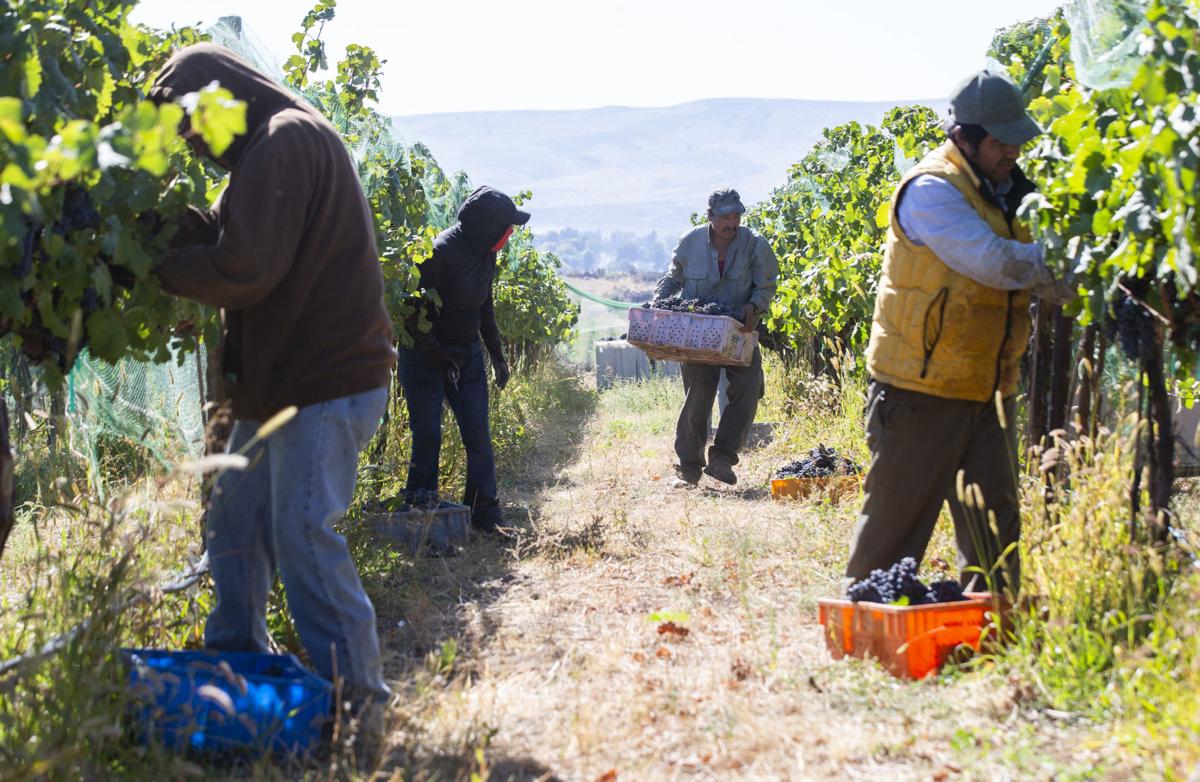 A worker moves a bin of Graciano grapes during harvest Thursday, Sept. 23, 2021, at Strand Vineyard in Cowiche, Wash.

A bunch of Graciano grapes hang during harvest Thursday, Sept. 23, 2021, at Strand Vineyard in Cowiche, Wash.

Washington State Wine Commission is forecasting a 5-10% increase in wine grape tonnage over last year’s 178,500-ton harvest, said commission President Steve Warner. And that is even with this year’s high temperatures earlier in the summer.

“The cooler temperatures (now) are a good thing,” Warner said. “We think everything is pointing in all the right direction.”

Local growers are reporting smaller grapes, but said they are expecting good quality.

Washington state is the second-largest wine producing state in the nation, behind California with more than 1,050 wineries. This year, Warner said the state is expected to produce 18 million bottles of wine.

Preliminary reports coming in from growers are that the wine grapes are coming in smaller, both in the size of the grapes and the clusters, Warner said, due to the heat.

“We had some hot days, and hot days tend to make the vines go to sleep,” Warner said. “The growers were prepared for it and farmed it differently.”

Sean Gilbert, with Gilbert Cellars in Yakima, said the triple-digit temperatures this summer meant growers had to be diligent in watering the grapes to ensure the canopy stayed healthy.

“It was a challenging summer, but it actually ended up being nice in the late summer, ending up with some great growing and ripening conditions,” said Gilbert, who grows wine grapes in Mattawa and the Horse Heaven Hills. He said warm days and cool nights are helping the grapes mature.

With the heat, the grapes came in smaller, Gilbert and Warner said, but that’s not necessarily a bad thing for wine. The smaller size means a greater concentration of flavor from the grapes.

Phil Cline, owner of Naches Heights Winery, also noted a reduction in the size of the clusters his workers have been picking in the Upper Yakima Valley. Where the clusters would normally weigh a pound, they are coming in at three-quarters or a half-pound instead, Cline said.

Shirley Puryear, co-owner and self-proclaimed “Wine Goddess” at Bonair Winery, likewise said the harvest is on the light side, but she said quality is good because of the concentrated flavor in the grapes.

And, she said the fall weather is cooperating, for the most part.

“We had a little bit of rain last week, which is good,” Puryear said. It was just enough, she said, to clear the dust off the fruit without causing mildew.

Bonair has harvested most of its white grapes and will start working on the red wine grapes next week.

Most of the area wineries appear to have been spared from the smoke from the Schneider Springs Fire, Warner said, which at times pushed Yakima County’s air into unhealthy levels of pollution. The fire started in early August and continues to burn 18 miles northwest of Naches.

Puryear said as long as the smoke was higher up in the sky, the grapes were safe. It’s when the smoke is at ground level that grapes are affected.

Cline, of the Naches Heights Winery, said smoke can affect the flavor of wine, and there are some varieties that specifically have a smoky flavor from being aged in fire-treated oak barrels.

“I’m sure there are smoke-affected grapes, but I don’t know how that will affect the wine overall,” he said. “We won’t know until fermentation or until it has been tested for smoke detection.”

He said this year’s wildfire smoke appears to be as close to what he experienced in 2017, when Kittitas County wildfires blanketed the Valley in smoke.

“Most normal average consumers may not be able to taste the smoke (from wildfires),” Cline said. “But professional wine makers all have good palates and can taste a small amount of smoke.”