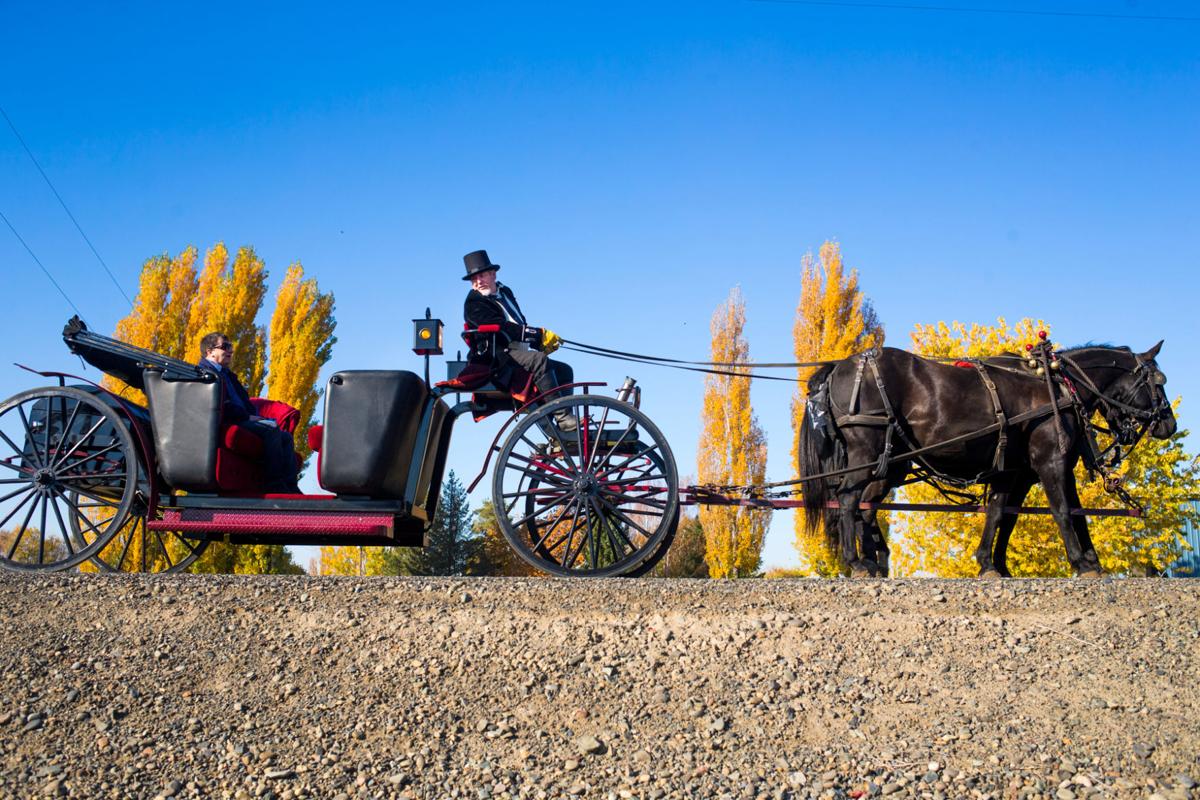 Alan Geho sits in the driver's seat of a horse-drawn carriage while waiting for his wine-tasting passengers to finish tasting at Tanjuli Winery in Zillah, Wash. on Saturday, Oct. 28, 2017. Geho, who runs Yakima Valley Carriage Company, started the service this summer. (JAKE PARRISH/Yakima Herald-Republic) 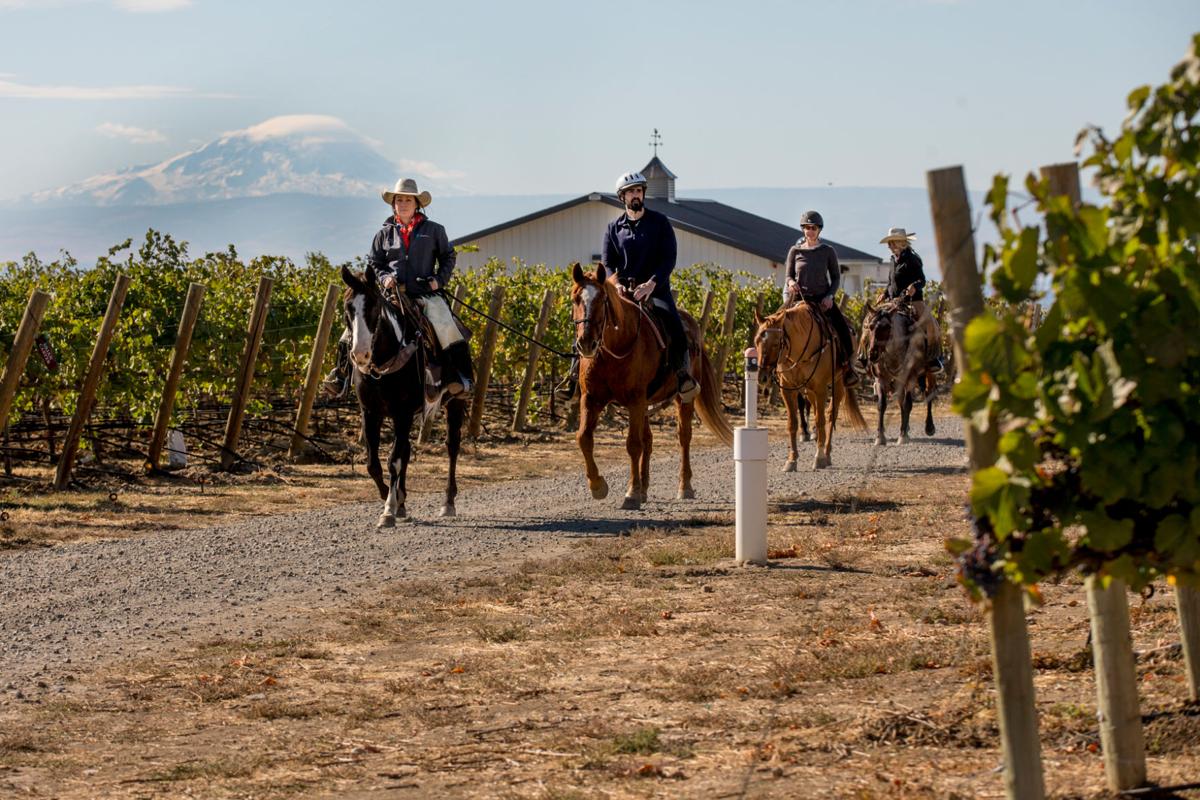 As Mt. Adams looms in the distance, Jordanne Pruitt, left, leads a group of wine tasters through vineyards at Dineen Vineyards in Zillah, Wash. during a winery tour on Saturday, Oct. 14, 2017. Pruitt, who works with Cherry Wood Bed, Breakfast and Barn, takes people on horseback winery tours in Zillah after they've lodged in teepees at Cherry Wood. (JAKE PARRISH/Yakima Herald-Republic) 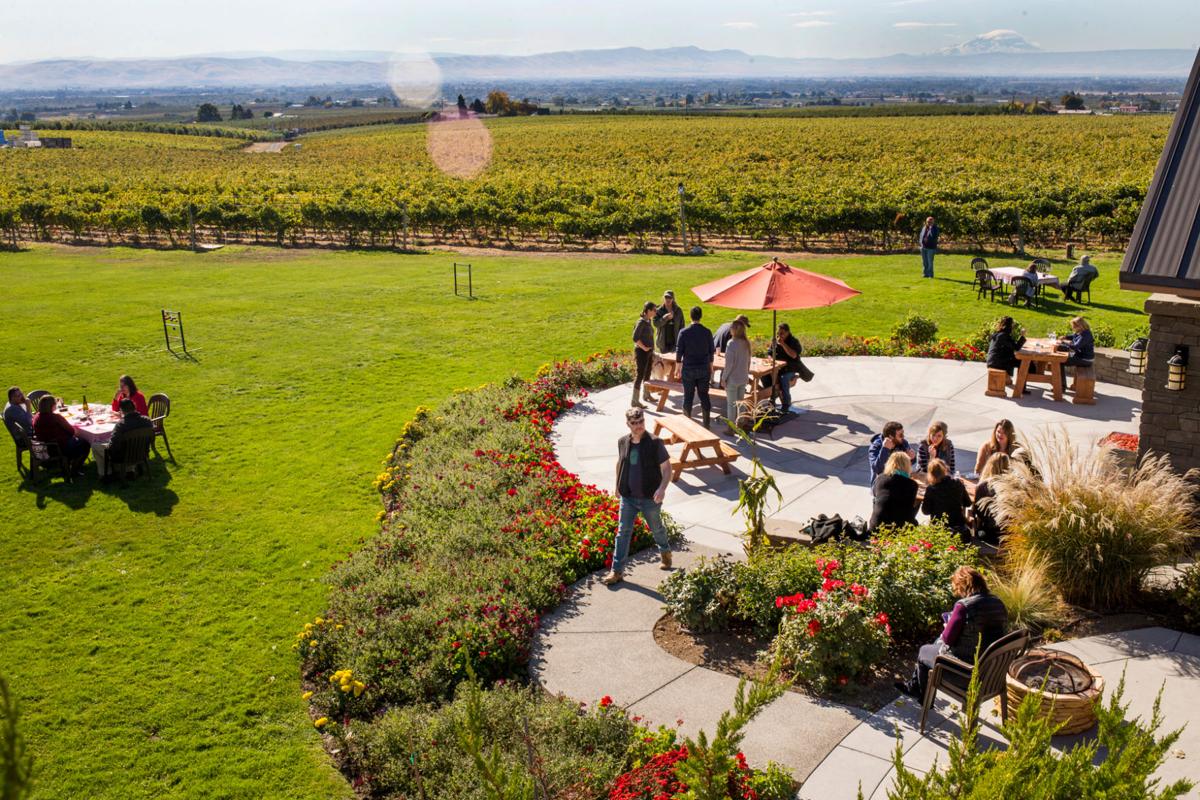 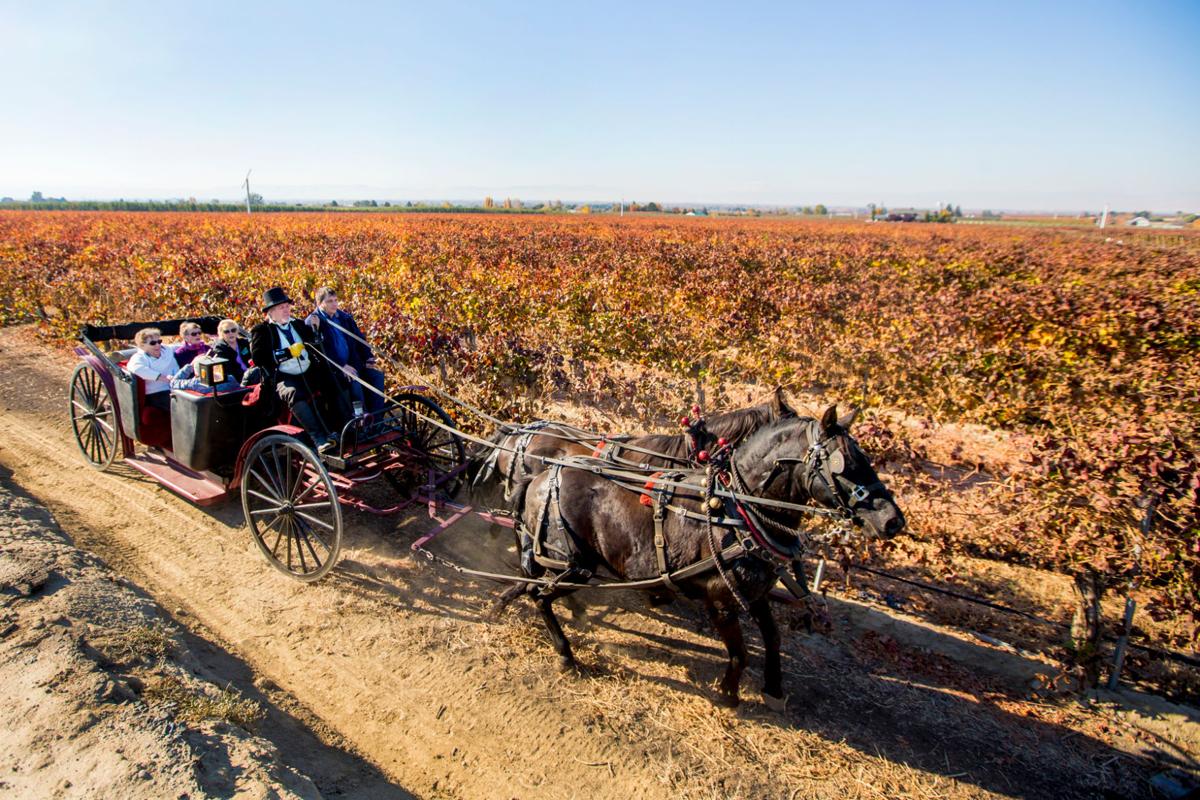 Alan Geho, wearing a top hat, steers a carriage through vineyards at Hyatt Vineyards in Zillah, Wash. while taking a group of women on a winery tour on Saturday, Oct. 28, 2017. (JAKE PARRISH/Yakima Herald-Republic) 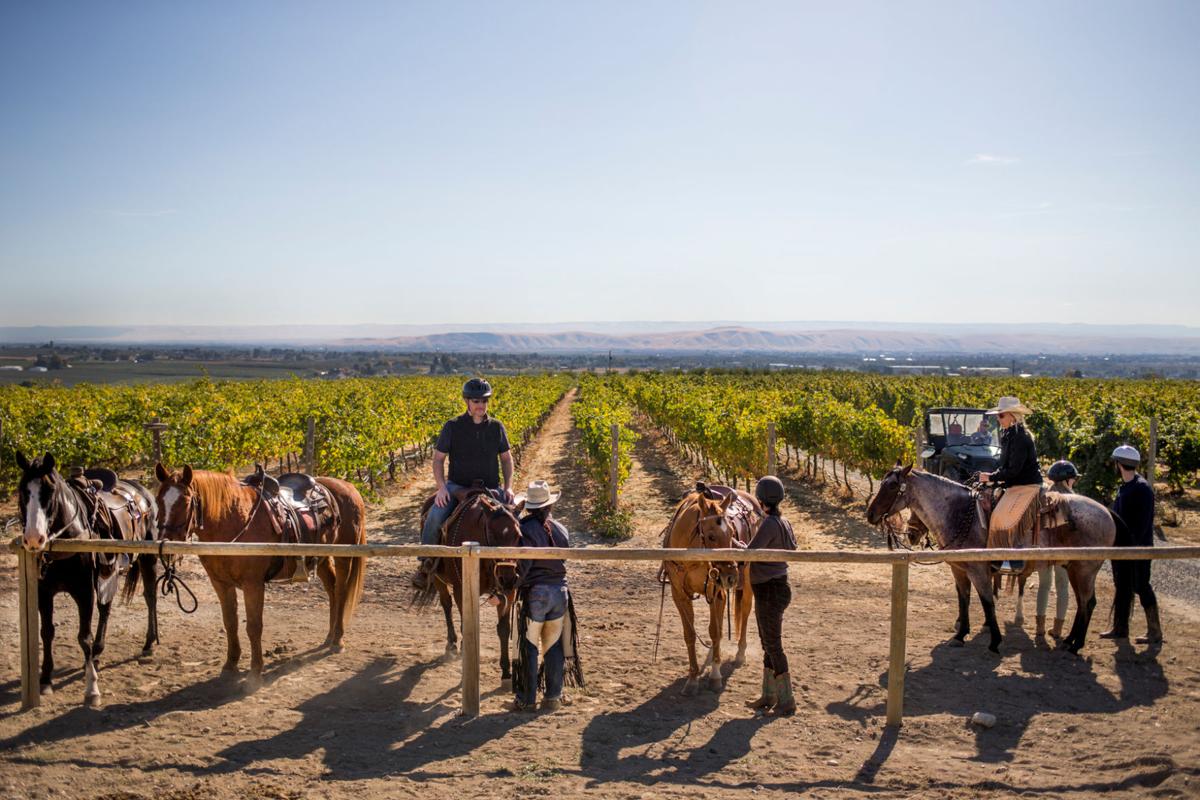 Alan Geho sits in the driver's seat of a horse-drawn carriage while waiting for his wine-tasting passengers to finish tasting at Tanjuli Winery in Zillah, Wash. on Saturday, Oct. 28, 2017. Geho, who runs Yakima Valley Carriage Company, started the service this summer. (JAKE PARRISH/Yakima Herald-Republic)

Alan Geho, wearing a top hat, steers a carriage through vineyards at Hyatt Vineyards in Zillah, Wash. while taking a group of women on a winery tour on Saturday, Oct. 28, 2017. (JAKE PARRISH/Yakima Herald-Republic)

Blending the old frontier with the new-age West, several local people are saddling up — or hitching up — to give folks a different way to sip wine.

Certainly, there are a number of ways to visit area wineries, including driving cars or riding in limousines.

And some trips don’t require motors, such as those people who bicycle or hike.

Then there are the throwbacks to the days of horse and buggies — or just horseback.

Alan Geho is newest on the scene with Yakima Valley Carriage Company. The company began offering rides on a carriage through Rattlesnake Hills Wine Trail in the Zillah area in July, traveling on back roads and trails through vineyards and orchards.

It took nine months of planning, looking at roads, figuring alternative ways to access wineries and scouring maps before the company was ready to roll.

“We’re an outdoor experience,” Geho explained. “I don’t want to just be on the road; I want something you can’t get from being in a car or limo. I can take you through the vineyards.”

“We wanted to do something fun before winter comes,” explained Jeanne Brandt of Selah.

And it was, reported Nancy McGinnis, a Yakima resident, after the ride was over. “It was a wonderful experience for all of us, just trotting along.”

Also joining them on the tour were their longtime friends Lori Barrett, Becky Guthrie and Pat Hyatt, all of Yakima.

“We all had a great time and said we would do it again,” McGinnis noted.

“We all have other jobs,” said Geho, a special education teacher at Union Gap School. “This is our fun.”

Trips generally last two to four hours, with prices ranging from $250 to $500.

For his part, Geho dons a top hat, waistcoat and Windsor tie when he’s the carriage driver.

Mostly they take visitors out during warm weather — April through October, but they’ll also be driving people in carriages for the annual Red Wine and Chocolate event in February.

They have covers for carriages in inclement weather, and Geho said he’s considering building a bobsled to draw visitors around wineries in the snow.

Although he’s a longtime horseman — he began riding as a Boy Scout — when he was 20, he happened upon a man logging in a forest with a horse and harness, and he caught the bug.

“What intrigues me about driving a wagon are all the moving parts that you have to put in order to make it happen,” he explained.

He’s never lost his enthusiasm for hitching up a wagon.

“The jingle of the chains and the feel of the reins, it’s an indescribable feeling I get when I’m driving,” he said. “It’s wonderful.”

While Geho and company offer a scenic, horse-driven carriage experience, Pepper and Tiffany Fewel of Cherry Wood Bed, Breakfast and Barn in Zillah are devoted to helping rescued horses while providing horseback tours through wineries.

“Everything we do is for the rescue horses,” Pepper said. “Everything goes back to them,” for feed and general care.

Pepper and daughter Tiffany save horses that were doomed to slaughter; currently they have 26, which take turns guiding riders on winery tours.

At Cherry Wood, not only can visitors ride horseback on a tour to several wineries, but they also have the option to spend the night on a bed inside a 22-foot-tall tepee.

When the Fewels started their winery tour business in 2001, it was a natural to combine that with overnight lodgers. Their devotion to rehabilitating horses who are elderly, abused or malnourished drives the business. Once a horse is nursed back to health, it usually will join those used to take riders out on the trail, which gives the Fewels the wherewithal to care for the horses year-round.

Cherry Wood offers horse-riding packages to wineries; some include overnights and some are just day trips.

For example, visitors can spend two nights, double occupancy, in a tepee and enjoy two home-cooked breakfasts for $535 per couple.

For those who want to ride on the winery tour, whether they spend the night or not, the cost is $245 per person, which includes lunch.

Patti Hudson traveled to Cherry Wood from Eastern Oregon to ride on the winery tour two years ago and enjoyed it so much, she returned two months ago, bringing a group of girlfriends with her.

“It’s a blast,” she said. “You get to see the countryside at a slower pace. Whether you’re a horse person or it’s your first time riding, it’s so much fun.”

Rides begin with some instruction at 11 a.m. on Saturdays and end after the last winery visit at 4 p.m. About four to six people go on each winery ride, which are generally offered from spring through fall.

Cherry Wood also has a “Cowboy Limo,” a hay wagon pulled by an ATV that ferries people around to four wineries for $145, including lunch.

Because they feel so strongly about giving their horses a good life, Pepper and Tiffany devote a good deal of time to caring for guests, preparing meals and guiding rides.

“Tiffany and I do everything,” Pepper explained. “We’re cooks, bottle washers, riders — we do it all.”

Wine Scene: Thanks, ancient cataclysms! (They shaped a landscape that's great for grapes)

YAKIMA, Wash. -- What we now know as the Yakima Valley American Viticulture Area was formed …