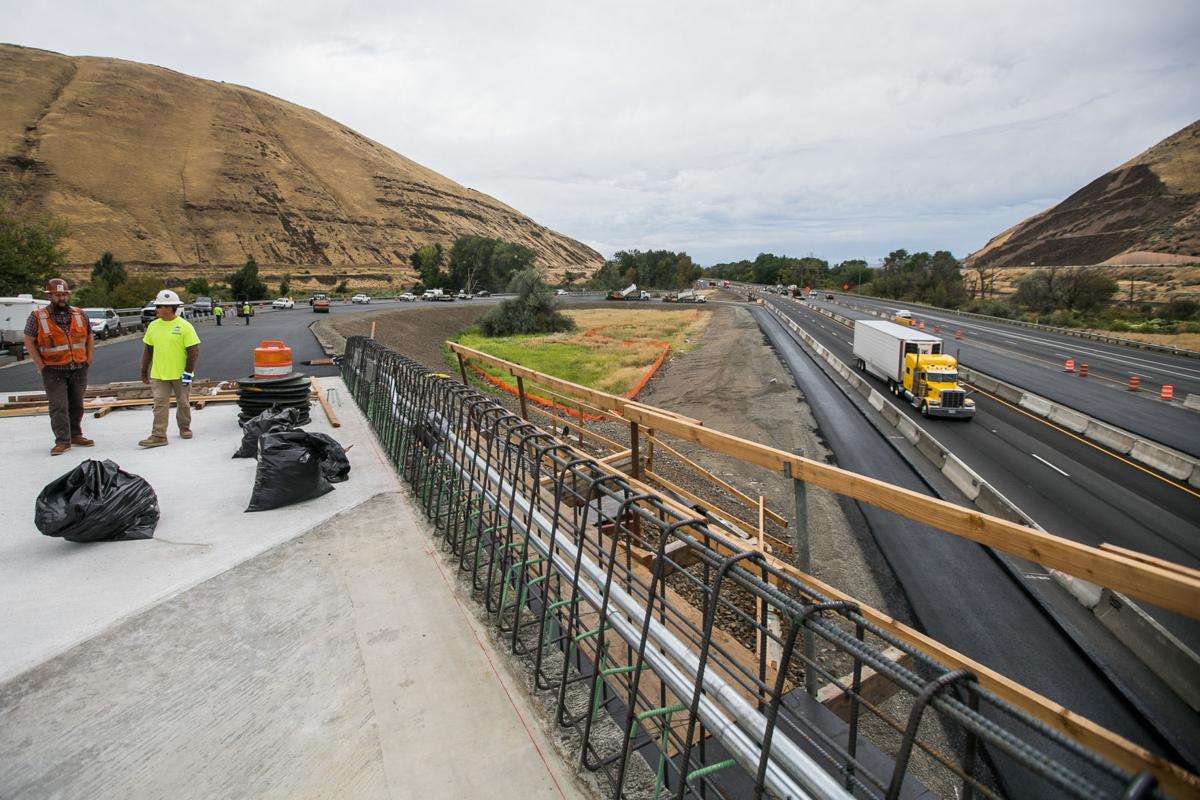 Construction continues on Aug. 21, 2019, on the Interstate 82 bridge that will connect the interchange with a new westbound on-ramp and a new eastbound off-ramp in south Union Gap. 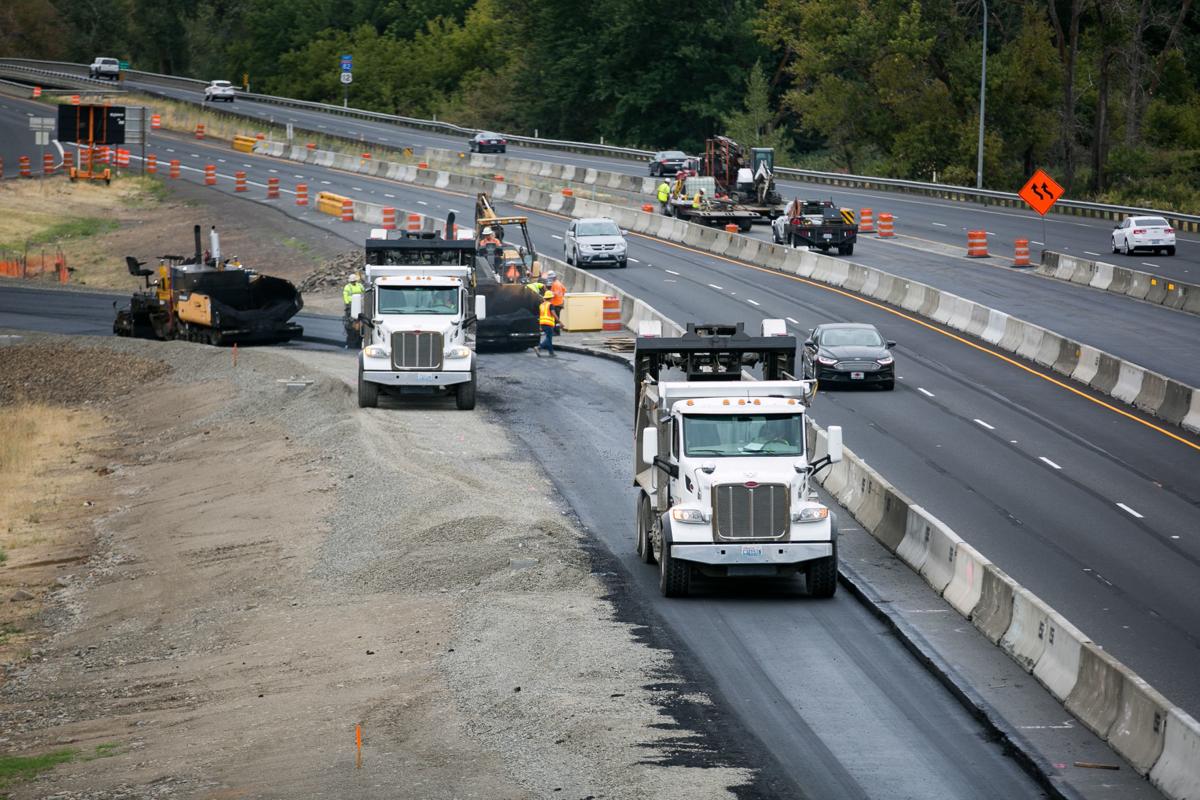 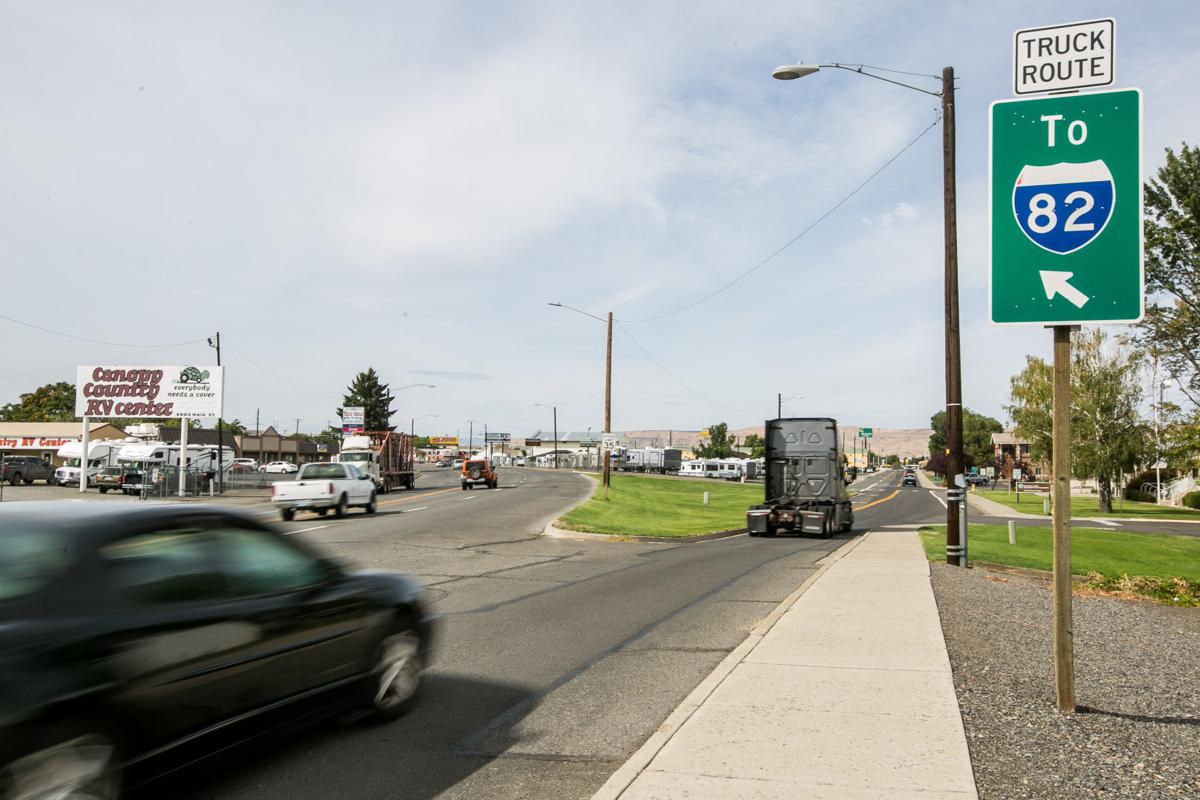 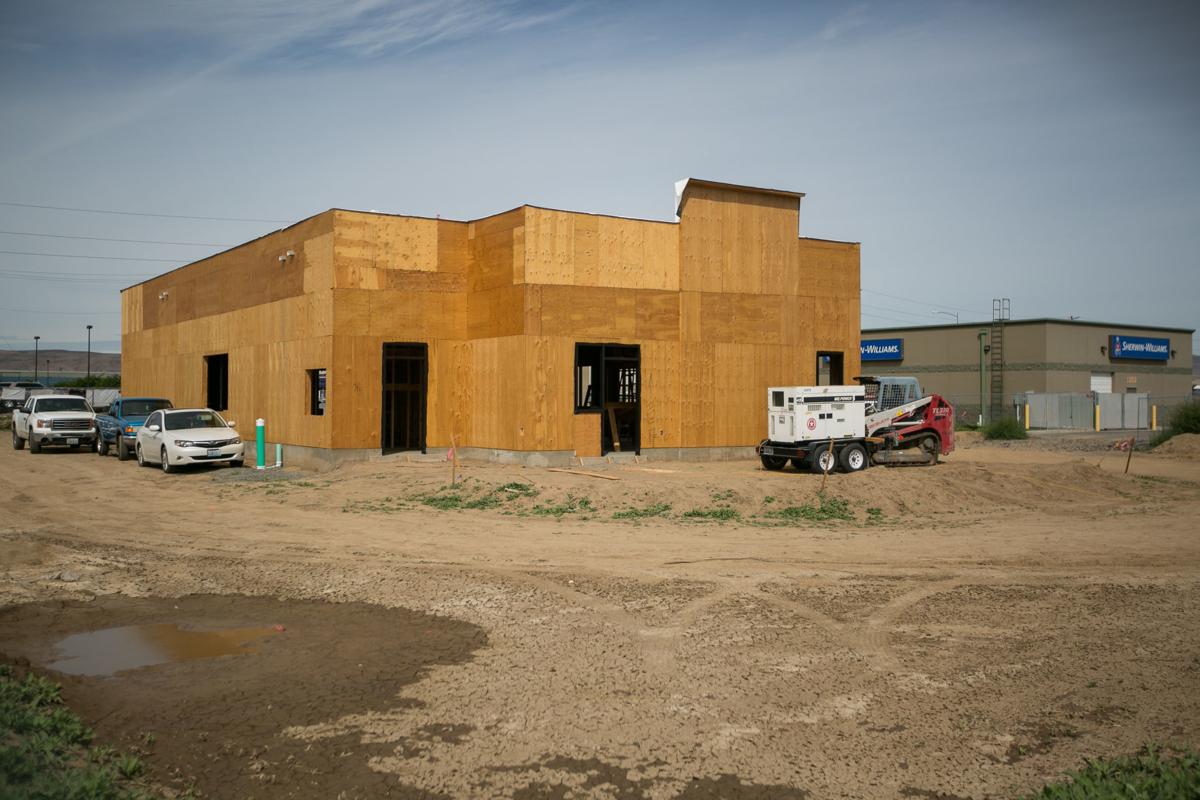 Construction continues Friday for a Dairy Queen at the corner of Longfibre Road and Valley Mall Boulevard in Union Gap. 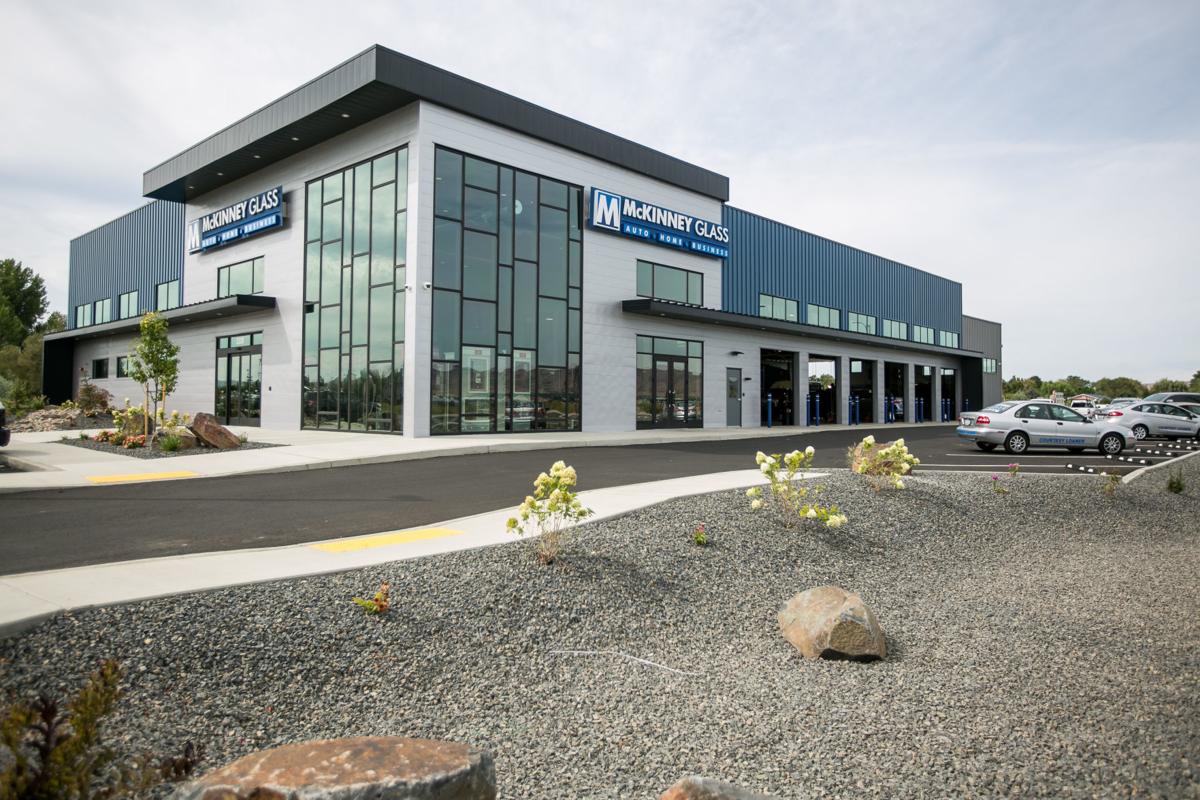 Construction continues on Aug. 21, 2019, on the Interstate 82 bridge that will connect the interchange with a new westbound on-ramp and a new eastbound off-ramp in south Union Gap.

Construction continues Friday for a Dairy Queen at the corner of Longfibre Road and Valley Mall Boulevard in Union Gap.

Back in 1885, lured by an offer from the Northern Pacific Railroad, businesses packed up their buildings from what was Yakima city and moved four miles north to North Yakima, where the train depot was located. Eventually North Yakima became Yakima and Yakima city became Union Gap.

Nearly 134 years later, Union Gap’s status in the Yakima Valley has changed considerably. Over the past 20 years, the city of more than 6,100 residents has established itself as the region’s retail center, thanks in part to retailers relocating from downtown Yakima to Union Gap’s Valley Mall. CenterCal Properties, the California-based owner of the Valley Mall, built new shopping centers to house additional retailers.

In addition, agricultural and manufacturing businesses, as well as government agencies, started locating along Ahtanum Road, west of the railroad tracks, over the last decade.

Such projects “open up the areas necessary to keep that growth moving forward,” Henne said.

In February 2015, Trent Marquis and several other members of the business community stood in a 206-acre vacant parcel north of Fulbright Park.

Marquis, whose family owned the property, and other community leaders were there to persuade representatives of AutoZone, the vehicle parts retailer, to build a distribution center on the property, noting that it had the necessary utilities, space to grow and was close to a railway line.

There was one major problem: The property was not easily accessible from I-82. Ultimately, AutoZone built the distribution center in Pasco and completed it in 2017.

“The timing just wasn’t there for us,” said Marquis, whose family has owned the property for more than two decades.

It’s not surprising, then, that Union Gap officials’ top priority is the completion of two separate, but complementary, road projects that would ease congestion at the Valley Mall Boulevard exchange and provide better access to the southern end of Union Gap, which has become a hub for governmental offices, fruit packing houses and manufacturers.

The state Department of Transportation started work on the South Union Gap Interchange off Main Street in April. When complete, the interchange will have a new westbound on-ramp and eastbound off-ramp.

The interchange improvements will allow drivers on both sides of the interstate to use both the Valley Mall Boulevard and South Union Gap interchanges to enter or exit Union Gap.

The exchange will connect to the Regional Beltway Connector, providing a new truck route that will link up with Ahtanum, Goodman and Longfibre roads.

Union Gap officials have completed the first phase of the project, a roadway that extends from Longfibre Road south to a roundabout that connects with Goodman Road via a bridge over Ahtanum Creek.

In July, the city secured a $6.6 million federal grant for the project. The city still needs another $8 million to complete the remainder of the roadway, which would extend southeast to the South Union Gap Exchange, Henne said.

“(The federal grant) doesn’t fill the entire construction need, but it’s a good chunk that we hope will drive interest from our other funding partners,” he said.

Pending funding, city officials aim to start construction for the remainder of the beltway by 2023. Construction is expected to take 10 to 12 months, Henne said.

The new roadway will open up the Marquis property for development, which is significant given that it’s one of the few large industrial parcels available west of I-82, said Jonathan Smith, executive director of the Yakima County Development Association, the county’s economic development arm.

Even though it didn’t work out, the site visit from AutoZone shows that there’s interest in the property and the South Union Gap area.

“Once the infrastructure is there, we’ll see activity happen,” Smith said.

Such development would add to the existing manufacturing and agricultural activity that the city has attracted in the past 15 years. Manufacturers, such as Paragon Films, Thermoforming Systems and Eagle Machine have located in South Union Gap near and along Ahtanum Road. FedEx also built a new facility off Goodman Road, near the first part of the Regional Beltway Connector.

The Costco relocation came a year before Union Gap started its Valley Mall Boulevard extension project, which expanded the roadway west from South Third Avenue to the intersection of 16th and Washington avenues.

Businesses that have opened in the last decade include Bud Clary Toyota, Yakima Chrysler Dodge Jeep Ram Fiat and Lowe’s.

There’s still plenty of vacant property for commercial development, including land north of Goodman Road and Valley Mall Boulevard. Recently, McKinney Glass moved to a newly constructed building on the property. A Tri-Cities movie theater company, Fairchild Cinemas, has submitted an environmental review application for a theater in the area.

The city has also attracted several government offices including the Department of Ecology, which built a new regional office off Longfibre Road behind WinCo Foods, and WorkSource Yakima, which relocated to a new building inside the Ahtanum Ridge Business Park south of West Ahtanum Road.

Professional workers need places to go during lunch and work breaks, Henne said. Options in the immediate area are limited and force those workers to head west to eateries located in the Valley Mall area.

A Dairy Queen is under construction in front of WinCo Foods. Henne said he would like to see new development in the West Valley Mall Boulevard attract new eateries for those who work nearby.

When most people visit Union Gap, usually via Main Street, Valley Mall Boulevard or the two interchanges off I-82, most see the area’s robust commercial and business activity.

Few venture west of the railroad tracks or into the core of the city, where many of Union Gap’s more than 6,100 residents live.

However, Union Gap officials aren’t disregarding opportunities to help the region alleviate both the tight rental and homebuyer market. The city has been working to secure $8 million in funding to install sewer and water in the South Broadway area, which the city of Union Gap annexed in the 1990s. There is still vacant land in the area, and there are abandoned properties that can be redeveloped for new residential use, Henne said.

The area has already attracted some duplex construction.

“We’re hoping to see a revitalization of this area,” said Jason Cavanaugh, building official for the city of Union Gap. “We’re hoping that with utilities going in more people would be apt to update their homes.”

Cavanaugh said there is also property near the Borton Fruit plant off South 26th Avenue and Ahtanum Road zoned for multi-family residential.

Union Gap is also working on new development to improve the overall quality of life for residents. That includes revitalizing the city’s downtown core, which includes the area along Main Street south of Valley Mall Boulevard to the South Union Gap I-82 interchange.

Henne said that before the construction of the section of I-82 that went by Union Gap in the 1970s, Main Street served as the main thoroughfare for travelers, as it was part of U.S. Highway 97.

“We had doctor’s offices,” Henne said. “We had restaurants and gas stations.”

Part of the benefit of redirecting truck traffic to the planned Regional Beltway Connector is that there would be less congestion in Union Gap’s downtown core, including Main Street, which would create a better atmosphere for pedestrians and those visiting businesses along the street, Henne said.

The city plans to start the first phase improvement project for Main Street in 2020. When complete, there would be new curbs, gutters, sidewalks and street lights on Main Street between Market and Franklin streets.

This project is the precursor to the city’s downtown revitalization effort, Henne said.

“Everyone thinks of Union Gap as an industrial and commercial retail hub and we like to promote that,” he said. “We’re also a community. We need to think of ourselves as a community and grow as a community.”

Taxable retail sales in Union Gap, which has seen robust retail, office and industrial development in the two decades, nearly doubled between 2004 and 2018