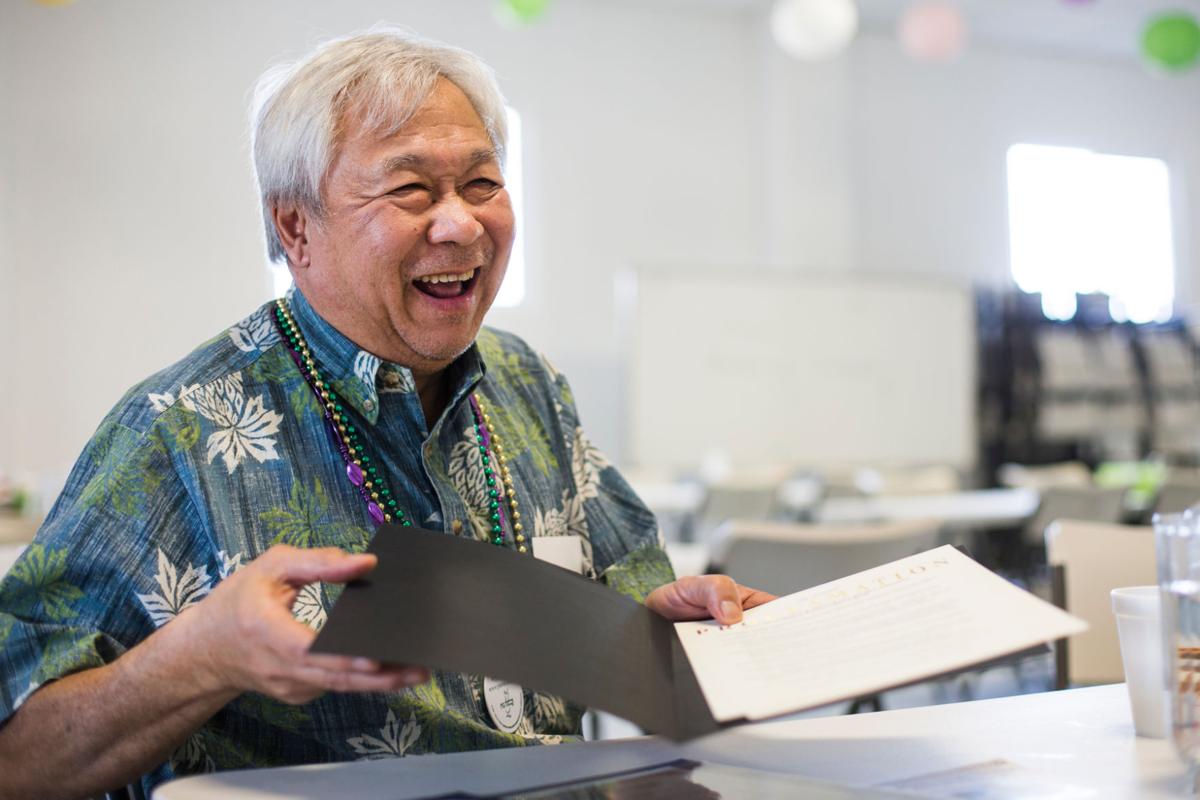 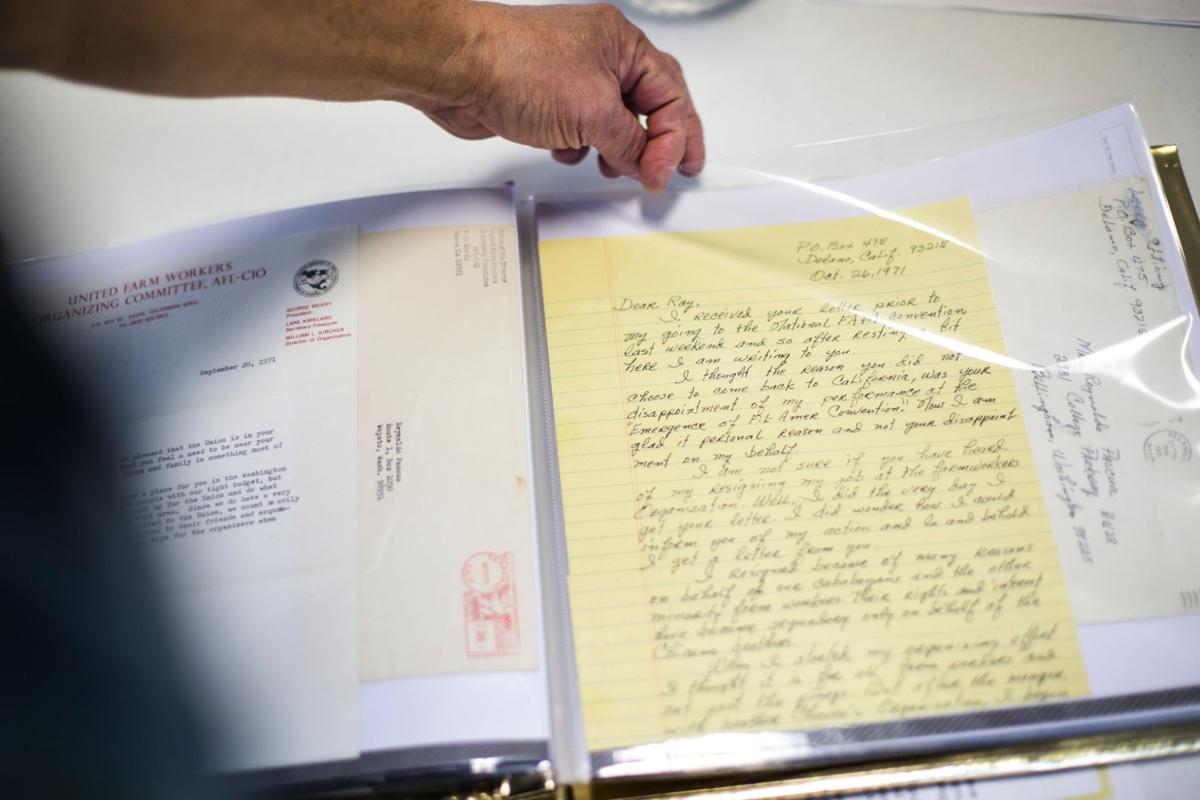 Rey Pascua looks at a hand-written letter addressed to him from Larry Itliong, assistant director of the United Farm Workers under Cesar Chavez. The two exchanged numerous letters in the late 1960s and early 1970s. (JAKE PARRISH/Yakima Herald-Republic)

Rey Pascua looks at a hand-written letter addressed to him from Larry Itliong, assistant director of the United Farm Workers under Cesar Chavez. The two exchanged numerous letters in the late 1960s and early 1970s. (JAKE PARRISH/Yakima Herald-Republic)

WAPATO — Most Thursdays Rey Pascua can be found at the Filipino Community Hall in this Lower Valley city greeting patrons who file in to feast on traditional Filipino food.

The weekly lunch raises money — at $7 to $12 a plate, depending on what diners order — needed to help cover the cost of running the hall.

Built in 1952 at 211 W. Second St. in Wapato, the building is the cornerstone of the Filipino-American Community of the Yakima Valley — a community that Pascua has overseen as president for the past 19 years.

But come next year, he’s stepping down.

“Will I let it go? Oh yeah, definitely,” he said with a boyish grin.

However, Pascua is not simply walking away. He’ll help find and train a replacement from within the community.

Handing over the reins will allow Pascua, 67, to focus on writing a book he’s pondered for years. It’s an unfolding story of how his curiosity about whether Filipinos had made any significant accomplishments in the U.S. sparked a friendship with Larry Itliong, the former assistant director of the United Farm Workers, and how that relationship led to the discovery of a strike by Filipino laborers in a California vineyard that ignited the farm worker movement commonly associated with Cesar Chavez.

From this friendship was born Pascua’s passion for the history of Filipinos in the United States and his years of commitment in preserving the contributions of Filipino pioneers to the Yakima Valley.

“The Itliong book is going to take a lot of time — it may take a trip to the Philippines to make sure everything is correct,” Pascua said.

The book will mark the final chapter in the years he’s spent preserving the hall, historical photos and other artifacts kept inside.

Not only has Pascua served the hall and community, he also is the national trustee of the National Filipino-American Historical Society and has led an effort to locate and document local Filipinos who fought under the American flag during World War II.

“He’s been very passionate and he’s always held the idea of preserving the story of the Filipino-Americans in the Yakima Valley as part of the legacy of the hall,” said community member Dori Peralta Baker as she stood in the facility’s kitchen. “The history of the hall and the history of the community is here. It’s like oral history — once you lose it, it’s gone.”

Born in the Philippines, Pascua was 2 years old when he came here with his mom, Maria, to join his father, Pablo, a field worker. His father had come years earlier and returned to the Philippines in 1949, where he met Maria. They were married soon after and Pascua was born. Pablo returned to the Yakima Valley to work, and in 1953 Pascua and his mom joined him in Wapato.

“We’ve been part of this community ever since,” he said.

Pablo played the bass fiddle and mandolin in a band and often performed at dances in Yakima, Pascua said.

Pascua recalls staying at a cabin in a Cowiche migrant camp with his family during the summer his father thinned apple and pear trees.

“Then we’d go back to Wapato in time for school,” he said.

Then in 1960, Pablo unexpectedly died of a heart attack. He was 53. Maria was two weeks away from having her third child and Pascua was 11.

“When dad died, the community was in shock — I mean he was only 53,” Pascua said.

But Filipino farmers and others in the community made sure that Pascua, his two younger sisters and his mom were OK.

The daughters of one farmer stayed with Maria to help her through her pregnancy, Pascua said.

“The community didn’t forget us,” he said. “We never went on relief, we didn’t go on welfare. The community always brought us vegetables and fruit.”

Maria remained single and focused on Pascua and his two sisters, Paula and Elizabeth, he said.

“Several men approached her and wanted to marry her after my father passed, and she said ‘No, I have three children to raise’ and that was her mission as a mother,” Pascua said. Maria died in 2000.

Farmers within the Filipino community provided Pascua jobs each summer picking fruit and vegetables, and he later traveled to Alaska with his cousins to work in a salmon cannery. It was hard work.

After graduating from Wapato High School, Pascua went on to Western University, where he began to wonder if Filipinos had made any significant achievements in the United States other than NFL quarterback Roman Gabriel, who played for the Los Angeles Rams from 1962-72 and later for the Philadelphia Eagles.

Pascua said he asked one of his roommates, who was a cartoonist for a farm worker magazine at the time, about Filipino contributions.

“He said: ‘Are you kidding me? Do you know anything about the Filipino farm workers in California?’” Pascua recalled.

Pascua said his roommate put him in contact with Itliong, who was heading a strike of Filipino farm workers in a vineyard in Delano, Calif., and Itliong invited him to visit. That was in the winter of 1970, and Pascua spent five days there learning about the strike and a friendship was struck between the two men. Though they didn’t know each other, Itliong and Pascua’s mom were from the same province — Pangasinan — in the Philippines.

Sitting in the dining area of the hall, Pascua recently flipped through a photo album containing many letters — correspondence over the years between himself and Itliong, who died in February 1977.

“There was a connection there from the male figure that I missed from my father,” Pascua said. “He seemed to take a very genuine interest in wanting to keep the friendship going. I’m lucky he did that.”

Although proclamations have been approved each year, state legislation prevents a permanent one.

However, Pascua has sought with much success permanent proclamations in four counties — Yakima, Pierce, King, and Kitsap. He also identified seven cities in the state with the most historic Filipino communities — Wapato, Auburn, Bainbridge Island, Tacoma, Bremerton, Pateros and Seattle. He convinced leaders in those cities to enact permanent proclamations as well.

Pascua also has been working with the families of local Filipinos who fought for the United States during World War II. In October, Congress awarded the Congressional Gold Medal to some 250,000 Filipinos who answered President Franklin D. Roosevelt’s call to unify Filipino and American forces in 1941 against Japanese insurgents.

Pascua made sure the families of 24 Filipino combat veterans who made the Yakima Valley their home will each receive one when state lawmakers hand out 200 statewide during an April 14 ceremony in Olympia.

Rep. Chandler said Pascua has been a powerful force in preserving Filipino-American history and culture over the 30 years he’s known him.

The Filipino-American community is a colorful part of the area’s history and culture, Chandler said. He vividly recalls Pascua’s late wife, Sandra, being as strong supporter of her husband’s efforts and always organizing traditional Filipino dance troupes for annual community celebrations and other special events. Sandra died in 2011.

WAPATO, Wash. -- Members of the Yakima Valley's Filipino-American community will hold their 66th Anniversary of the Hall Dinner on March 24.

WAPATO, Wash. — More than 72 years ago, Gregorio Azurin was based in the mountainous terrain of the Philippines where he manned a .50 caliber …