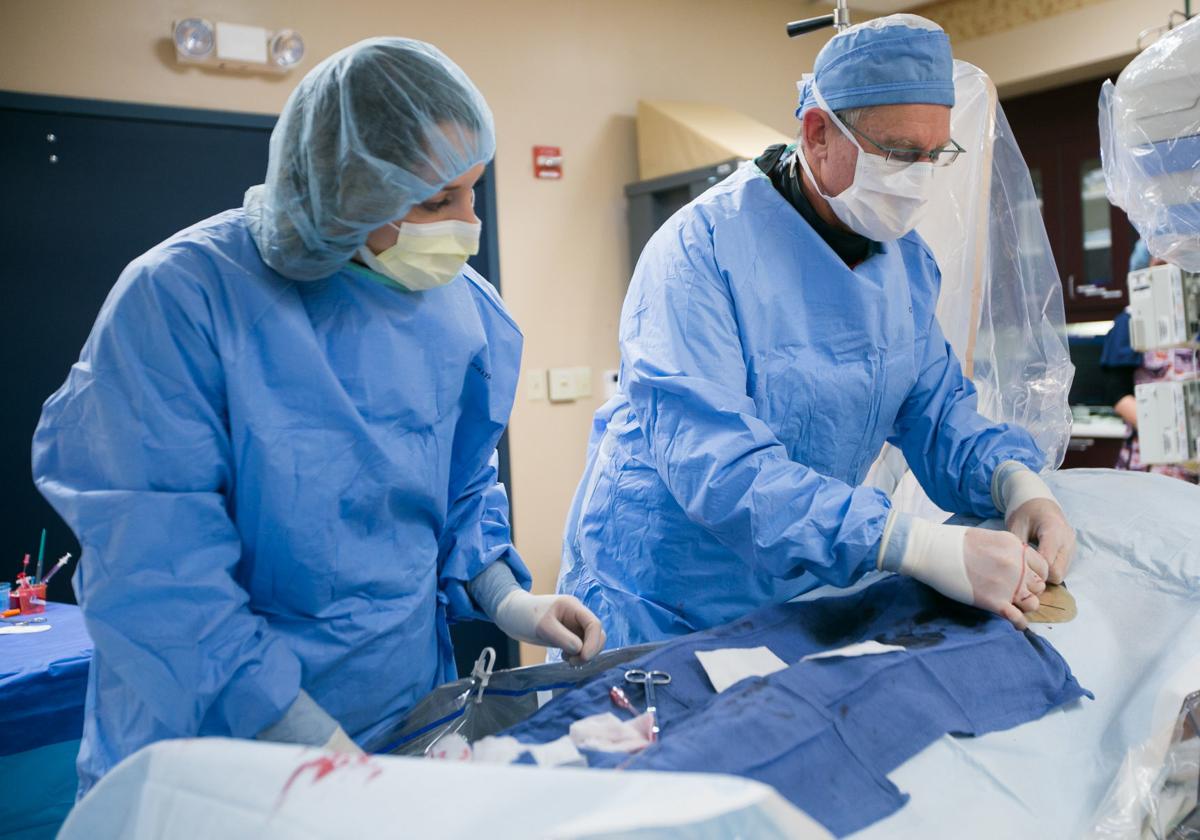 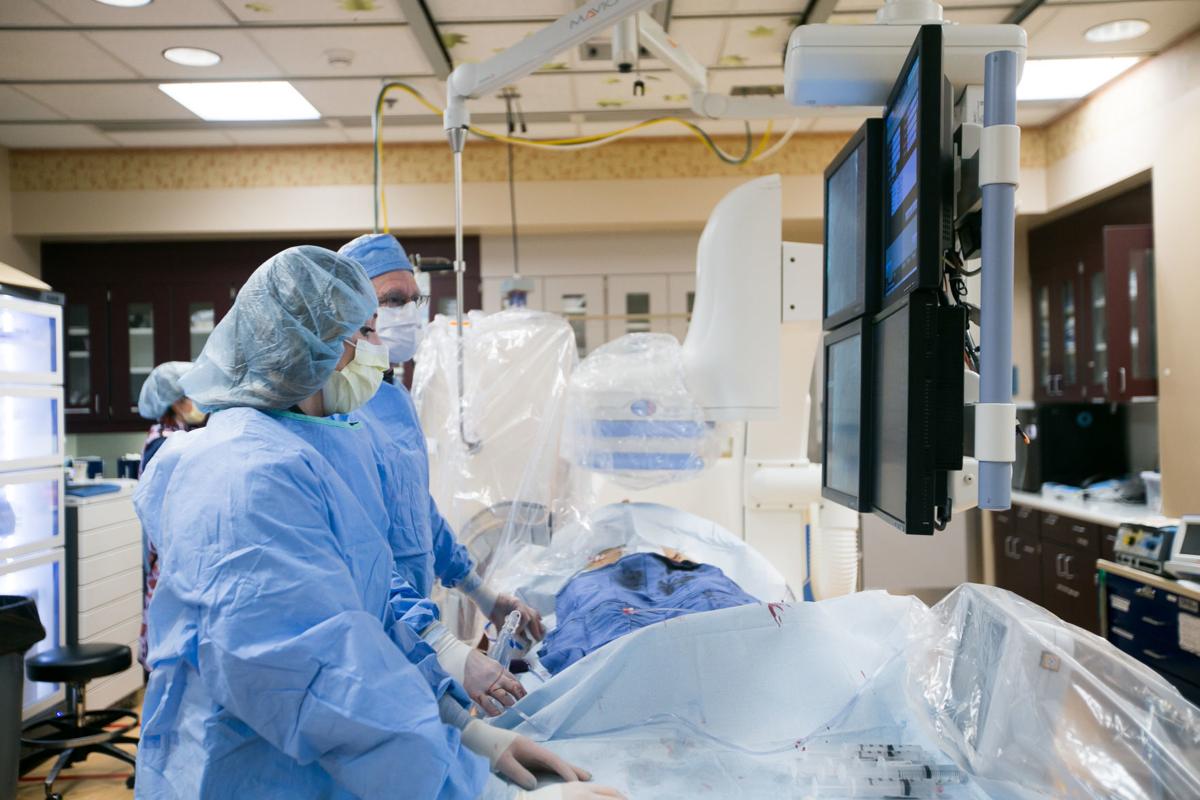 Dr. R. Thomas McLaughlin, a cardiologist with the Yakima Heart Center, right, reads a monitor during a cardiac catheterization as Courtney Scrogham, RT, assists Tuesday, Dec. 24, 2019, at Virginia Mason Memorial in Yakima, Wash. Monitors allow doctors to see where the flow of blood is going when they inject contrast to catheters.

Dr. R. Thomas McLaughlin, a cardiologist with the Yakima Heart Center, right, reads a monitor during a cardiac catheterization as Courtney Scrogham, RT, assists Tuesday, Dec. 24, 2019, at Virginia Mason Memorial in Yakima, Wash. Monitors allow doctors to see where the flow of blood is going when they inject contrast to catheters.

In a sense, the procedure was no different from the more than 230 PCIs the hospital has done so far this year or the 2,200-plus it’s done over nearly two decades.

PCI is a nonsurgical procedure in which a stent is inserted to open a narrowed or blocked coronary artery.

But this procedure was the first Memorial completed on an elective rather than emergency basis.

The state Department of Health issued Virginia Mason Memorial a Certificate of Need for elective PCIs this month.

Memorial is now one of just 10 non-

cardiac surgical hospitals statewide with the certificate and the first in a decade to receive one.

With the certificate, the hospital can now do the procedure as a preventative measure rather than as a response to a heart attack.

For Virginia Mason Memorial, it was an achievement that came after more than a decade of effort.

“For me, it was the most significant thing I did for Memorial in my professional career,” said Dennis Hoover, the hospital’s senior director of the cardiovascular service line. “More importantly, it’s an achievement for patient care.”

It also puts Virginia Mason Memorial in direct competition with the city’s other hospital, Astria Regional, which is attempting to emerge from Chapter 11 bankruptcy.

During a PCI, a catheter — a thin plastic tube — is used to insert a stent, a thin mesh metal tube. The catheter is inflated to open the artery and then removed. The stent remains to keep the artery open.

Having the procedure done on an elective basis would help restore a patient’s blood flow, stop heart-related chest pain and prevent a heart attack, Hoover said.

A decade ago, only hospitals that offered on-site cardiac surgery, including Astria Regional Medical Center, performed PCIs on an elective basis.

Hoover said when patients under Memorial cardiac care wre recommended elective PCIs, they often opted to get the procedures done at hospitals elsewhere in the state, namely in the Seattle area.

“They basically indicated they would like to have a choice,” Hoover said.

Memorial applied for a Certificate of Need in 2011 but was denied because the state Department of Health believed that hospital did not prove it could meet the required annual threshold of 300 PCI procedures. The figure includes both elective and emergency PCI procedures.

In 2016, the hospital applied to change the rule to reduce the threshold to 200. The hospital noted a medical study that stated hospitals without on-site cardiac surgery should aim to do a minimum of 200 PCIs annually, based on studies that showed more successful outcomes for hospital labs that did at least that many. The state Department of Health accepted the petition and the threshold was changed in April 2018.

That paved the way for Memorial, whose current volume is well above the new threshold, to receive the Certificate of Need for elective PCIs. For Hoover, it enables patients to get a broader range of cardiac care services without traveling.

He expects Memorial to see an increase in the number of PCIs.

The Department of Health’s decision was a blow to Astria Health, which was the sole provider of elective PCIs in the Yakima Valley.

The Yakima-based health care system, which is undergoing bankruptcy reorganization, was dealt a second blow when Astria Sunnyside Hospital’s application for an elective PCI Certificate of Need was denied this month.

Astria Health, in a written statement, said it plans to ask the state Department of Health to reconsider its decision.

In a report outlining the evaluation process, the state Department of Health said it believed Astria Sunnyside did not provide substantial evidence it would increase PCI volumes enough to reach the threshold of 200.

The agency also said the financial state of Astria Health created uncertainty over the economic impact of the project on the Sunnyside hospital. The Department noted that the organization has either submitted reports for Astria Sunnyside late or not at all, resulting in the department having to use bankruptcy filing documents to evaluate the hospital’s financial health.

“The department concludes that the immediate long-range operating costs of the project cannot be evaluated,” according to the report.

Now that Memorial can also offer elective PCIs, Astria Regional no longer has a market distinction, which was considered crucial as the hospital seeks to emerge from bankruptcy. It was also a key reason Astria continued its efforts to fund a hospital that continues to lose money.

Astria first voiced those concerns through its attorneys, Sam Maizel and Sam Alberts, in a document filed with the U.S. Bankruptcy Court.

“As such, Astria Regional Medical Center was the only hospital in the City of Yakima allowed to preform elective heart procedures in Yakima,” Maizel and Alberts wrote in a Dec. 17 status report. “This market differentiator has been a driving force in (Astria Health’s) decision to fund losses at Astria Regional Medical Center, as a dedication to the community’s access to health care is paramount.”

In an emailed statement to the Yakima Herald-Republic, Astria Health said that Memorial having the service would result in “declining utilization at Astria Regional Medical Center.”

“This low volume has required Astria Health to apply a disproportional allocation of (debtor-in-possession) funds used to keep the hospital open,” according to Astria’s statement.