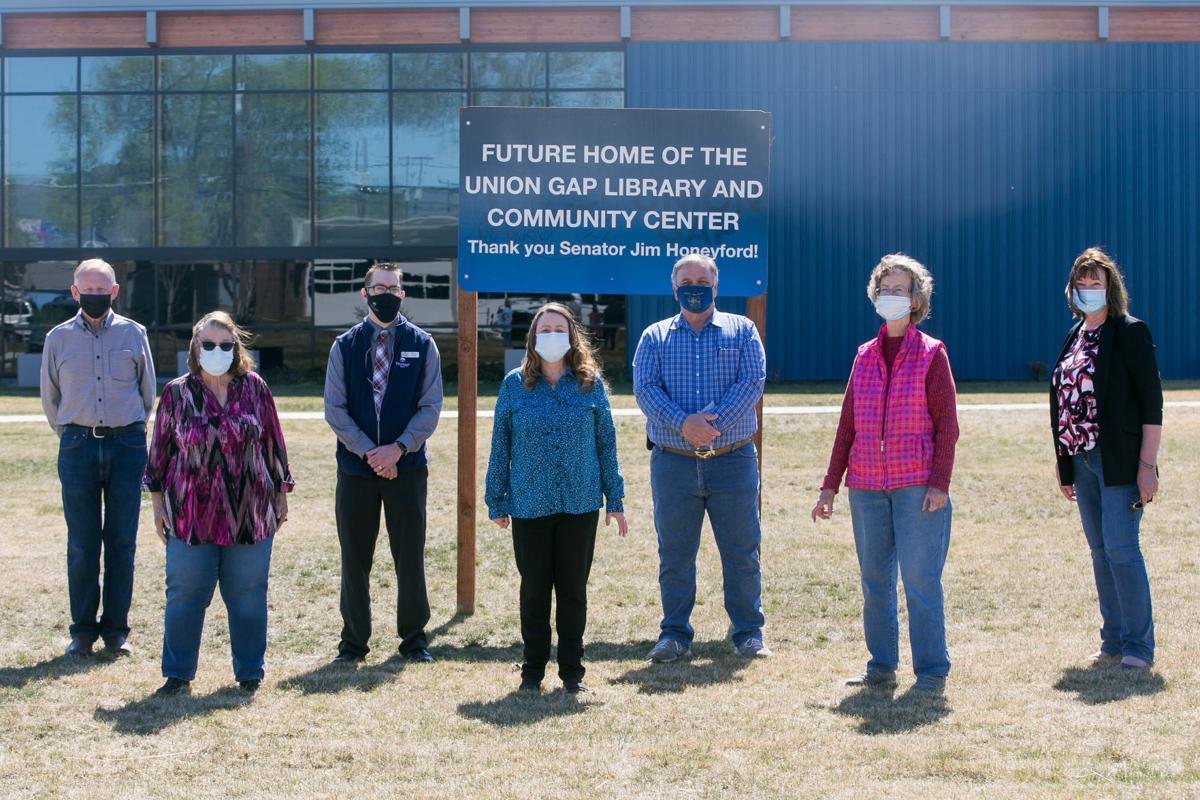 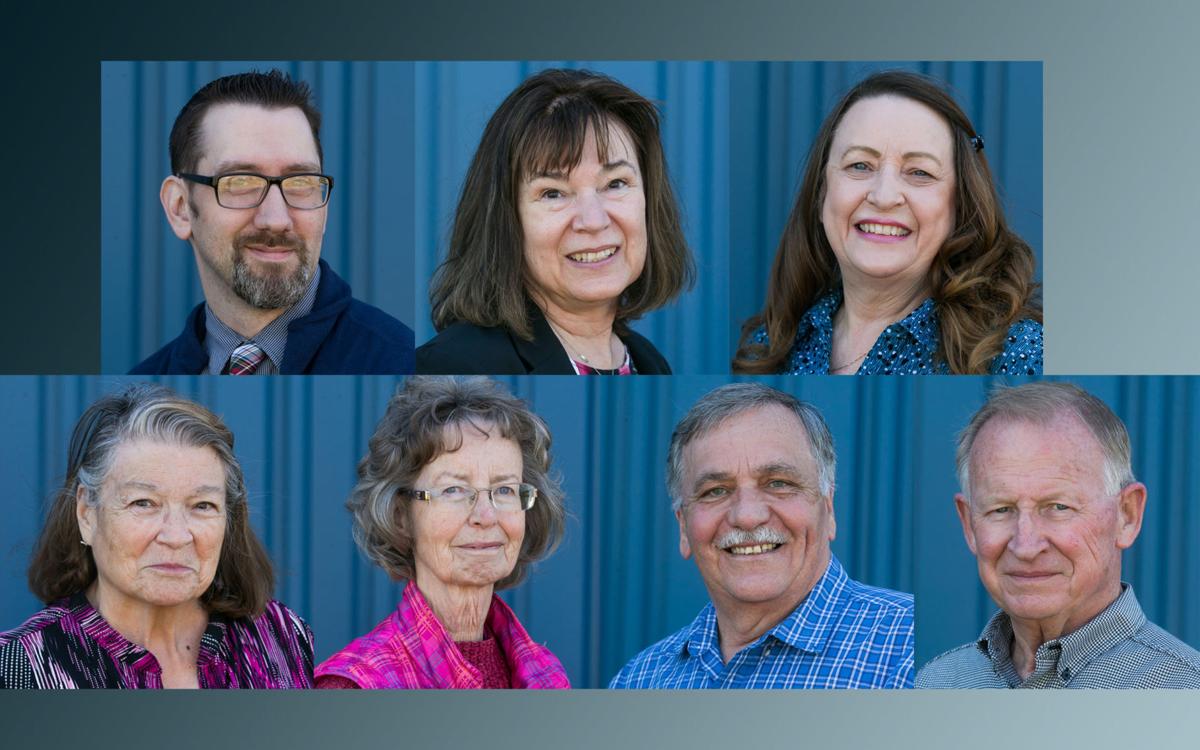 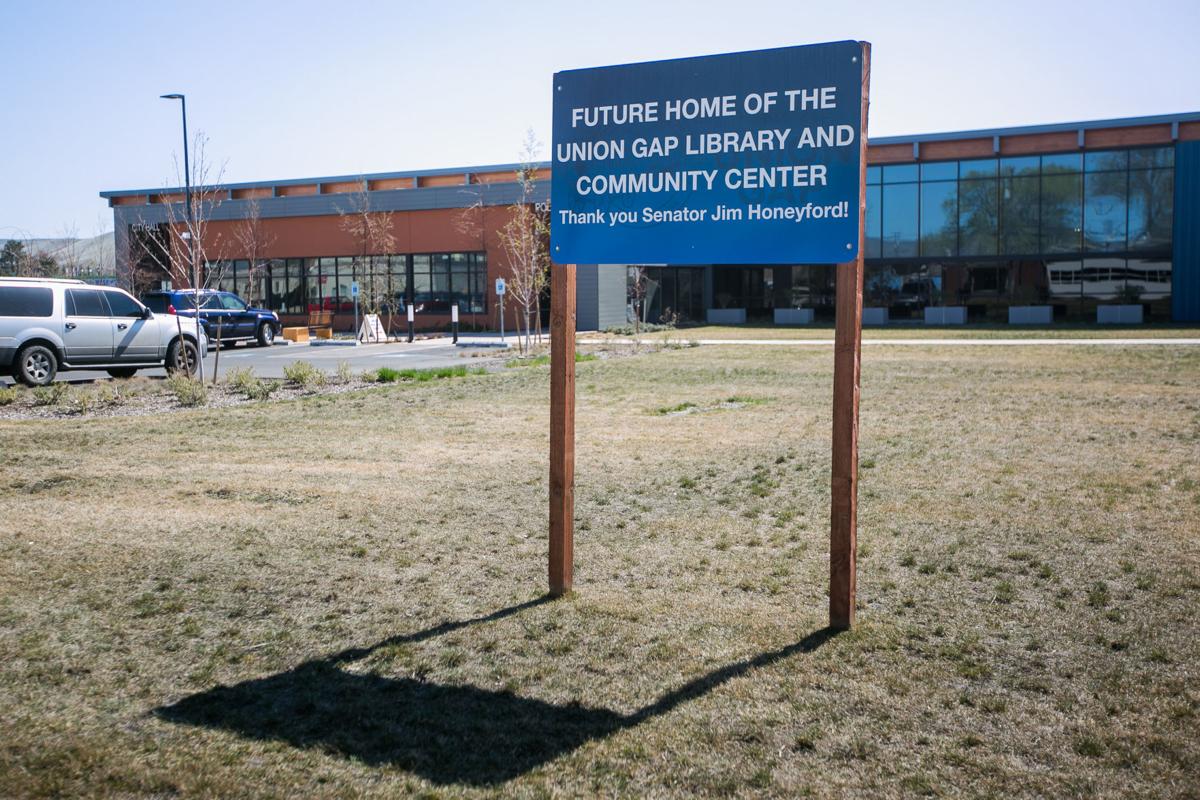 A sign which bears the inscription “Future home of the Union Gap Library and Community Center. Thank you Senator Jim Honeyford!” is photographed Monday, April 5, 2021, on property near City Hall and the police station in Union Gap, Wash. State Sen. Jim Honeyford, R-Sunnyside, assisted the library committee to get a $2 million grant from the state Department of Commerce to build a new library and community center.

A sign which bears the inscription “Future home of the Union Gap Library and Community Center. Thank you Senator Jim Honeyford!” is photographed Monday, April 5, 2021, on property near City Hall and the police station in Union Gap, Wash. State Sen. Jim Honeyford, R-Sunnyside, assisted the library committee to get a $2 million grant from the state Department of Commerce to build a new library and community center.

Plans to bring a public library back to Union Gap are picking up speed, with groundbreaking for a new building on the northwest end of the city’s Civic Campus set to happen this spring.

The 5,000-square-foot Union Gap Library and Community Center will be built on the campus at 102 W. Ahtanum Road, across from City Hall and the police department. BORArchitecture designed the structure. Windows will predominately face City Hall and the building’s silhouette will be comparable, with shed roofs and similar cladding materials, according to the nonprofit’s website. The existing parking lot will be extended west to the accommodate more visitors.

Plans can be viewed on the Friends of Union Gap Library & Community Center website.

City officials are seeking construction bids until 3 p.m. April 21, according to a legal advertisement published Monday in the Yakima Herald-Republic. A pre-bid conference for interested contractors is set for 10 a.m. Wednesday.

Supporters are looking forward to the library and community center opening sometime in late 2022.

The city of more than 6,000 has been without a local library branch since the former library in the old City Hall building was razed in 2015 due to black mold.

“On behalf of the Friends of Union Gap Library & Community Center 501c3, we would like to thank each and every one of the citizens of Union Gap for your effort in keeping the dream of a library and community center alive in Union Gap,” Mark Crouchet, chairman of the nonprofit, said in a news release.

“These resources are very much needed and we are sure that once the project is completed, you will enjoy the benefits of your efforts for years to come.”

Supporters created the nonprofit a year ago to continue the efforts of a city-sanctioned Friends of Union Gap Library and Community Center committee formed in 2018. The committee had three years to do the work, said Julie Schilling, a Union Gap City Council member and member of that original committee.

Committee members visited different libraries to get an idea of what might work best for Union Gap, Schilling said. They talked to state Sen. Jim Honeyford, R-Sunnyside, about funding options. And in February 2019, they wrote and submitted a grant application with the state.

“In May 2019, we found out we had a $2 million grant,” said Schilling, who is vice chair of the nonprofit’s board.

That Department of Commerce use-it-or-lose-it grant in the state’s capital budget, secured with Honeyford’s help, will fund the library and community center, along with an additional financial commitment from the city of Union Gap.

The partnership between Union Gap and Yakima Valley Libraries means the city builds and maintains the library, and the district, which has sites throughout Yakima County, provides the books, staffing and infrastructure, said Terry Osman, treasurer of the nonprofit.

The emphasis on fundraising is two-fold, supporters said. First, they’ll need to bridge any funding gaps created by a year of pandemic conditions impacting the costs of construction. The second is to be an ongoing source of financial support for programs, projects and resources.

In the next several weeks, they’ll be seeking donors who are interested in partnering with the nonprofit to raise funds for the commercial kitchen, the community center patio — which will extend the usable square footage of the Community Center by utilizing outdoor space — and general construction costs as increases occur.

In early March, Maralyn Killorn and Helen Canatsey co-chaired the Friends’ third book sale, held at the Valley Mall. Another is set for May 8.

Killorn, Canatsey and other volunteers worked to get the annexation vote passed, said Kathy Cluck, secretary of the nonprofit’s board.

“When they were working on the annexation vote, these older ladies were out going door to door and talking to people about the library. They’re out fundraising now, talking to owners of companies,” Cluck said. “This something they’re invested in. ... They care so deeply about Union Gap.”

The nonprofit Friends of Union Gap Library & Community Center is concentrating on fundraising for the future, with several options for those who want to help.

Legacy Bricks will secure donors a space in the building's courtyard. Cost is $75 through June 30 for $75 ($100 beginning July 1) for having a Legacy Brick custom engraved.

Supporters have held three book sales and plan another from 9 a.m. to 3 p.m. May 8 at Heritage Bank, 2205 S. First St. They have plenty of books and materials for the sale (though they wouldn't turn down donations). They could use volunteers, though.

Union Gap voters appear to favor a levy that would annex a proposed library into the Yakima Valley Libraries district.