Justices of the nation’s highest court found the 1855 Yakama Treaty protects tribal members from state fuel taxes, even when bringing out-of-state fuel onto the reservation for retail purposes.

Today’s 5-4 ruling confirms rulings in lower courts that the treaty provides Yakamas a right to freely travel all highways and bring goods to market. 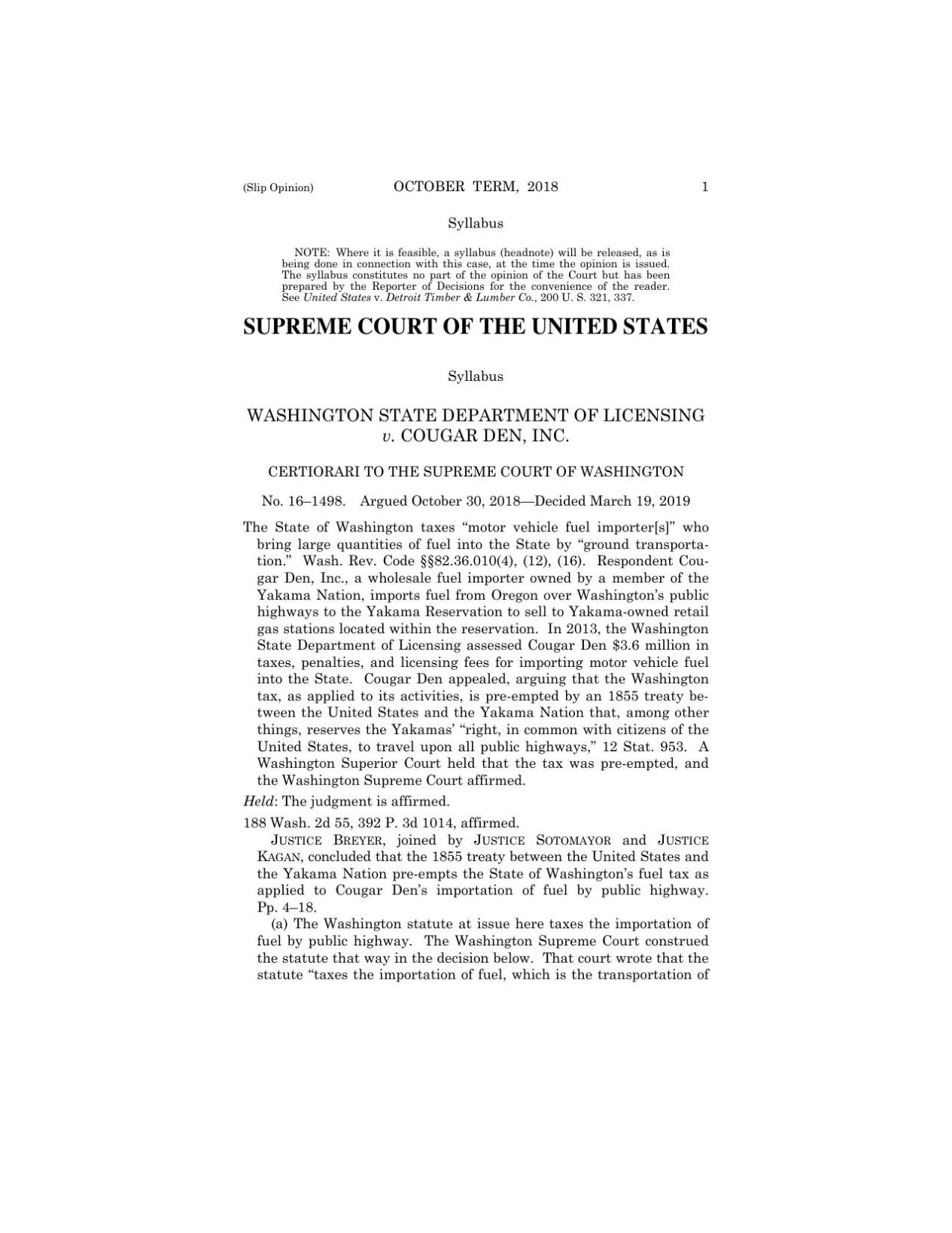 Tuesday’s decision confirms lower-court rulings that the treaty provides Yakamas a right to freely travel all highways and bring goods to market.

The Yakama Nation issued a statement applauding the ruling, saying the high court understood the treaty as it was understood by the tribal leaders who signed it.

“The United States and the state of Washington have reaped the historical, present, and future benefit to one-third of the land mass and resources of present day Washington state and it is this great sacrifice that our Yakama Nation gave up to have our rights memorialized forever. Today, the United States Supreme Court has acknowledged and upheld our treaty rightfully so in the face of present day individuals who sought to renegotiate the terms that were memorialized between our nations in the year of 1855, and for that we are grateful,” Tribal Council Chairman JoDe Goudy said in the statement.

The conflict arose in 2013, when the state Department of Licensing claimed the Cougar Den — a Yakama fuel distributor and convenience store in White Swan — owed $3.6 million in unpaid state fuel taxes.

The Cougar Den is owned and operated by Kip Ramsey, a Yakama, and located deep within the reservation.

As a sovereign government, the Yakama Nation and its members are exempt from state cigarette, fuel and sales taxes on the 1.3-million acre reservation.

And provided, That, if necessary for the public convenience, roads may be run through the said reservation; and on the other hand, the right of way, with free access from the same to the nearest public highway, is secured to them; as also the right, in common with citizens of the United States, to travel upon all public highways.

At issue was whether Ramsey should have paid the state fuel tax when he brought wholesale fuel into the state from Oregon.

Ramsey argued that he doesn’t because of right to travel provision in the treaty his tribe has with the federal government. Two lower courts, Yakima County Superior Court and the state Supreme Court, previously ruled in favor of Ramsey.

In a ruling published this morning, the Court upheld the treaty as shielding Yakamas from the state fuel tax and even quoted then-territorial Gov. Isaac Stevens, who negotiated the treaty with the Yakamas.

“Governor Stevens further urged the Yakamas to accept the United States’ proposals for reservation boundaries in part because the proposal put the Yakama Reservation in close proximity to public highways that would facilitate trade. He said, ‘You will be near the great road and can take your horses and your cattle down the river and to the (Puget) Sound to market...’

“In a word, the treaty negotiations and the United States’ representatives’ statements to the Yakamas would have led the Yakamas to understand that the treaty’s protection of the right to travel on the public highways included the right to travel with goods for purposes of trade. We consequently so construe the relevant treaty provision,” Justice Stephen Breyer wrote for the majority.

EDITOR'S NOTE: This story was edited to include reaction from the Yakama Nation.