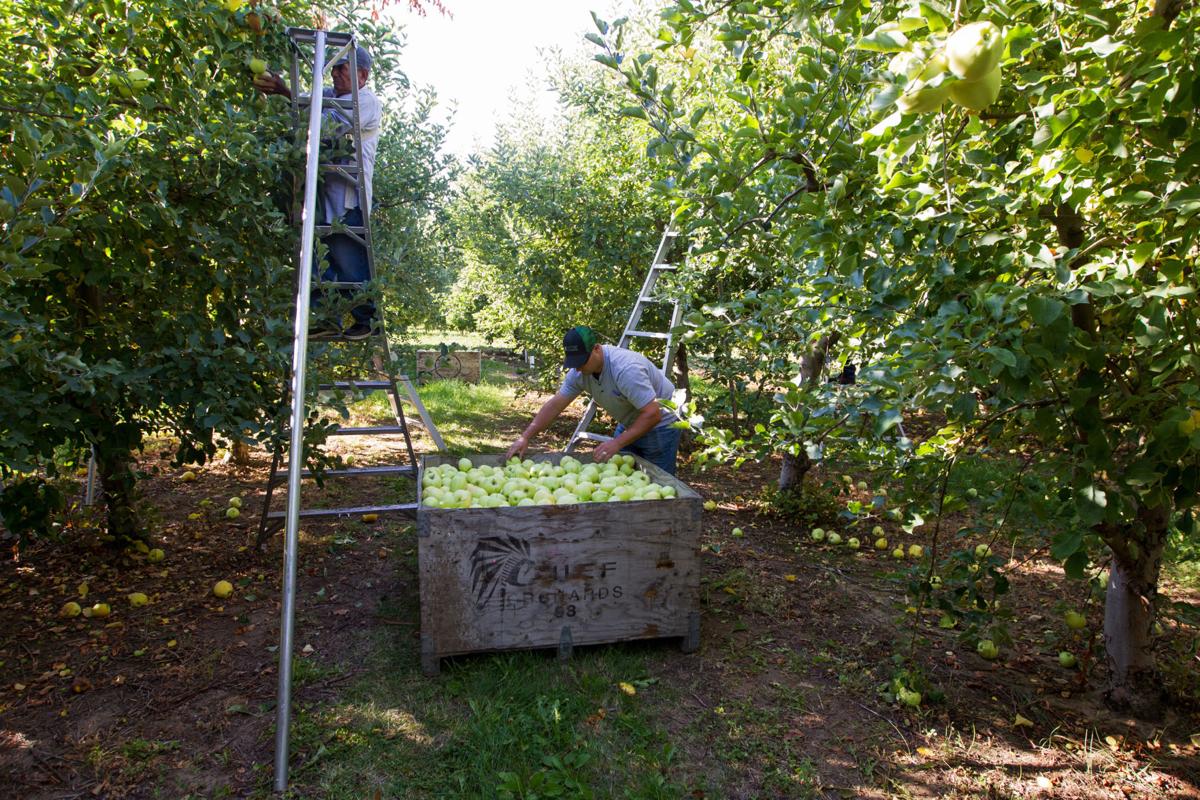 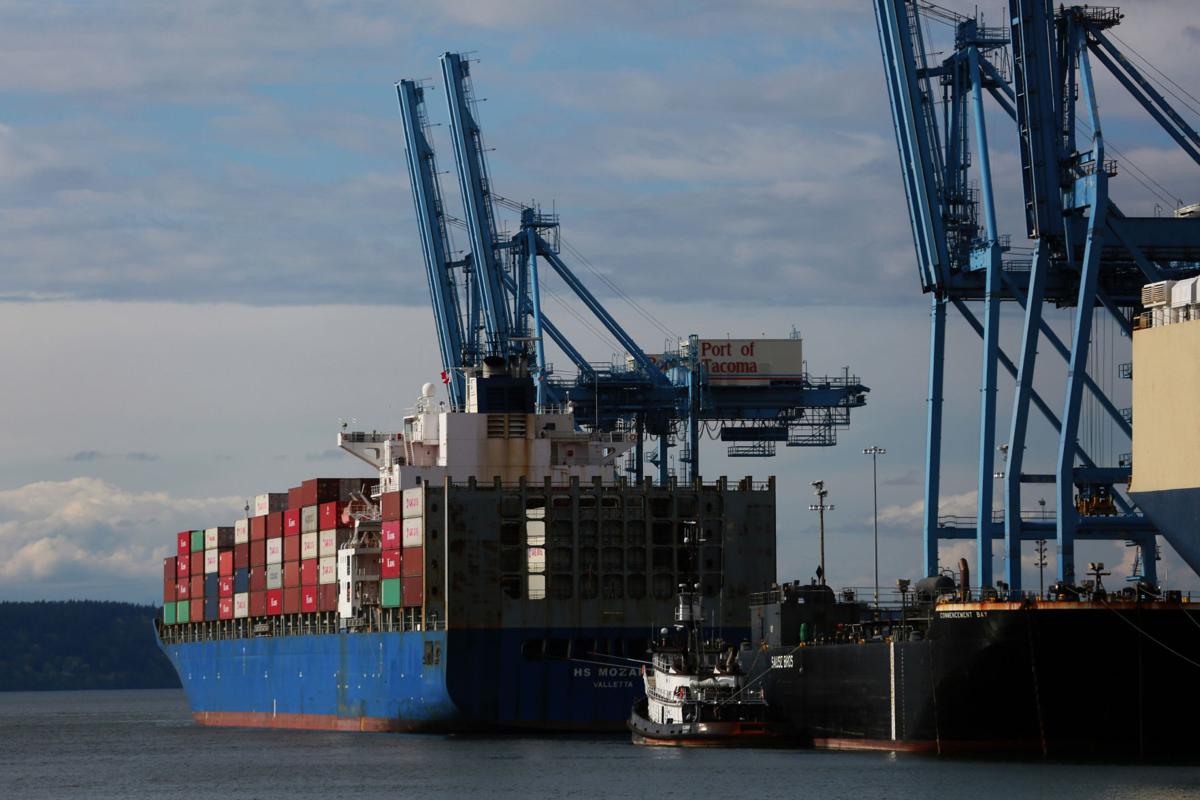 A container ship is moored at the Olympic Container Terminal at the Port of Tacoma April 7, 2015. (ERIKA SCHULTZ/The Seattle Times)

A container ship is moored at the Olympic Container Terminal at the Port of Tacoma April 7, 2015. (ERIKA SCHULTZ/The Seattle Times)

President-elect Donald Trump’s promises to cut regulations and spur energy development sound good to farmers, but there’s also concern that his opposition to free trade could hurt apple exports and that plans to deport millions of workers could exacerbate labor shortages.

While cautioning that those campaign promises haven’t been replaced with detailed policy proposals, leaders in Washington’s ag community agreed to discuss the potential impacts.

“I think we just don’t know enough yet about what President-elect Trump is going to propose, and we do know those proposals are going to be moderated by Republicans and Democrats in Congress,” said Dan Wood, executive director of the Washington Dairy Federation. “This is a big unknown for everybody, but we’re not fearful. We’re going to be engaged with the new administration on trade and immigration issues.”

But dairy farmers see one clear positive coming from the new administration right away: a different culture at the Environmental Protection Agency. Wood pointed to the fact that earlier this year, EPA funding was improperly used to fund an advocacy campaign that blamed farmers for water pollution.

“Here is Washington state, we’ve had issues with the EPA and their deception over What’s Upstream,” Wood said, referring to the campaign. “Getting people who will run an agency with less agenda will be a refreshing thing.”

The possible effects of other campaign promises are less clear but potentially more far-reaching.

Trump has vowed to withdraw from the Trans-Pacific Partnership, an as-yet-unsigned deal to cut tariffs and expand trade with 11 other Pacific Rim countries, and to renegotiate or withdraw from the North American Free Trade Agreement, which has encouraged trade with Mexico and Canada since 1994.

Losing the Trans-Pacific Partnership would have a minor impact on apple exports, but losing NAFTA would have serious consequences for fruit exports, said Todd Fryhover, president of the Washington Apple Commission.

Mexico and Canada buy about 40 percent of the apples that Washington growers export, he said.

Combined, that’s about 15 million boxes of apples sold for competitive prices thanks to the provisions of NAFTA.

China also is a growing market for Washington apples. If Trump puts new duties on Chinese goods as he has proposed, there would likely be repercussions such as new tariffs or even bans on Washington’s fruit and other major industry exports, Fryhover said.

“We need every market that we can get our hands on. … Free and unfettered access is our No. 1 priority,” Fryhover said.

Trump voters want him to follow vows on immigration, trade

On the other hand, Mark Powers, executive vice president for the Northwest Horticultural Council, which represents growers in foreign markets, said he thinks Trump wants to renegotiate NAFTA to make it work better, not to scrap it.

“We’re looking forward to working with the new administration,” Powers said. “I guess I’m fairly optimistic that if you look at the whole picture — food safety, labor, immigration, USDA policies for trade, EPA regulations — there’s a whole host of issues that any president has control on, and regulatory reform appears is top on the agenda”

That regulatory reform — and Trump’s promise to cut two old regulations for every new one — sounds good to most farmers, according to Frank Lyall, a Grandview orchardist and president of the Yakima County Farm Bureau.

In addition to new leadership at the Environmental Protection Agency, a change at the U.S. Department of Labor would also be welcome, Lyall said, adding that the current labor secretary has been somewhat unfriendly to the agriculture industry.

He’s also optimistic that Trump can alter federal reserve policies he sees as driving the boom and bust cycle for agricultural commodities. He blames the zero interest rates for underestimating the value of investment and creating overproduction, which then drives down prices. Wheat, for example, is at its lowest price in about 10 years.

“If farmers invest and take on debt when prices are high and then prices collapse, it affects the whole economic chain in agricultural communities,” Lyall said. “I think that volatility in ag prices … drives support for politicians like Donald Trump because it causes voters to think they don’t have a lot left to lose.”

As for Trump’s talk of deporting millions of undocumented immigrants, Lyall said he thinks that’s unlikely. Instead, he expects the new administration to work with congressional Republicans on immigration reform policies that will include or expand guest worker programs that the Central Washington ag industry increasingly relies on.

But because building a wall on the Mexican border and increasing deportations were central issues of Trump’s campaign, some people expect quick action.

When there are no more groceries in the store and the wheat harvest is lying in the field, maybe then people will see that our jobs are not being stolen.

If Trump moves quickly to mandate E-verify — a federal program to verify that job applicants have legal status — it could have dire consequences for labor-intensive fruit crops, said Mike Gempler, executive director of the Washington Grower’s League, which represents and assists growers on labor issues.

“He’s made a lot of promises that he wants to prioritize American employment and in his published positions he’s said he wants to de-magnify the jobs magnet, and the way you do that is through E-verify,” Gempler said. “If the E-verify program was put in place, which I think he is very likely to do, that would be a game changer.”

That’s because undocumented workers account for a huge portion of seasonal farm workers — as much as 80 percent, according to some estimates.

If E-verify is phased in along with expansions of the H2-A guest worker program or the rollout of a more flexible temporary worker visa program passed by the Senate, growers would have time to adapt, Gempler said.

“Having an enforcement-only policy without a parallel means for securing a workforce, that’s a real threat to the industry,” he said.

Washington growers are already dealing with a shrinking seasonal workforce, as fewer people are trying to come to the U.S. looking for work without documentation.

The H2-A program allows guest workers to come here legally under contract to work on a specific farm for a set wage and a set period of time if that farmer can prove that no domestic workers are willing to take the jobs. Use of the program is growing rapidly, but it’s a complicated process and requires significant investment in worker housing.

But that’s an issue the Trump campaign didn’t talk much about. Gempler said he hopes Trump will bring in advisers who understand agricultural labor issues.

“The new Trump administration, I think, has got a solid group of ag advisers behind them,” he said.

“With any presidency, there are a lot of positions that need to be filled and there needs to be capable people to explain to the White House what helps. It’ll come together.”

But in the meantime, concerns linger.

“I think the immigration policies will have a bigger impact than the trade stance,” said Don Schilling, president of Wesco International, a hay export firm in Ellensburg. “And it’s not hyperbole to say that the profitability of hay in Eastern Washington is completely dependent on the export market.”

But since hay already enjoys relatively open markets in Japan, Korea, China and the Middle East, dropping out of the Trans-Pacific Partnership would have little direct impact on hay prices, Schilling said. That’s why he’s more concerned about labor issues, even though hay itself is quite mechanized.

“If you dislocate any part of the labor market, that shortage will disrupt the rest,” he said. “But when there are no more groceries in the store and the wheat harvest is lying in the field, maybe then people will see that our jobs are not being stolen.”

Schilling is also concerned that the president-elect’s rhetoric on immigration could increase hostility in our local communities.

“It’s a day after the election and I have employees coming to me saying they are worried that their children are getting picked on in school,” he said. “I think that as Americans, we’re better than making a part of our community feel unwelcome.”

But there is one piece of Trump’s platform that Schilling sees as welcome news for the hay industry and all of Washington’s agricultural economy: his plan to invest heavily in transportation infrastructure.

“Anything the federal government can do to improve Interstate 90 to widen the highway, fix our bridges and improve the port of Seattle would be great,” he said.