You are the owner of this article.
Edit Article Add New Article
You have permission to edit this article.
Edit
Home
News
Bottom Line
Sports
SCENE
Photos & Video
Opinion
Obituaries
Unleashed
Classifieds
The Vanished
1 of 13 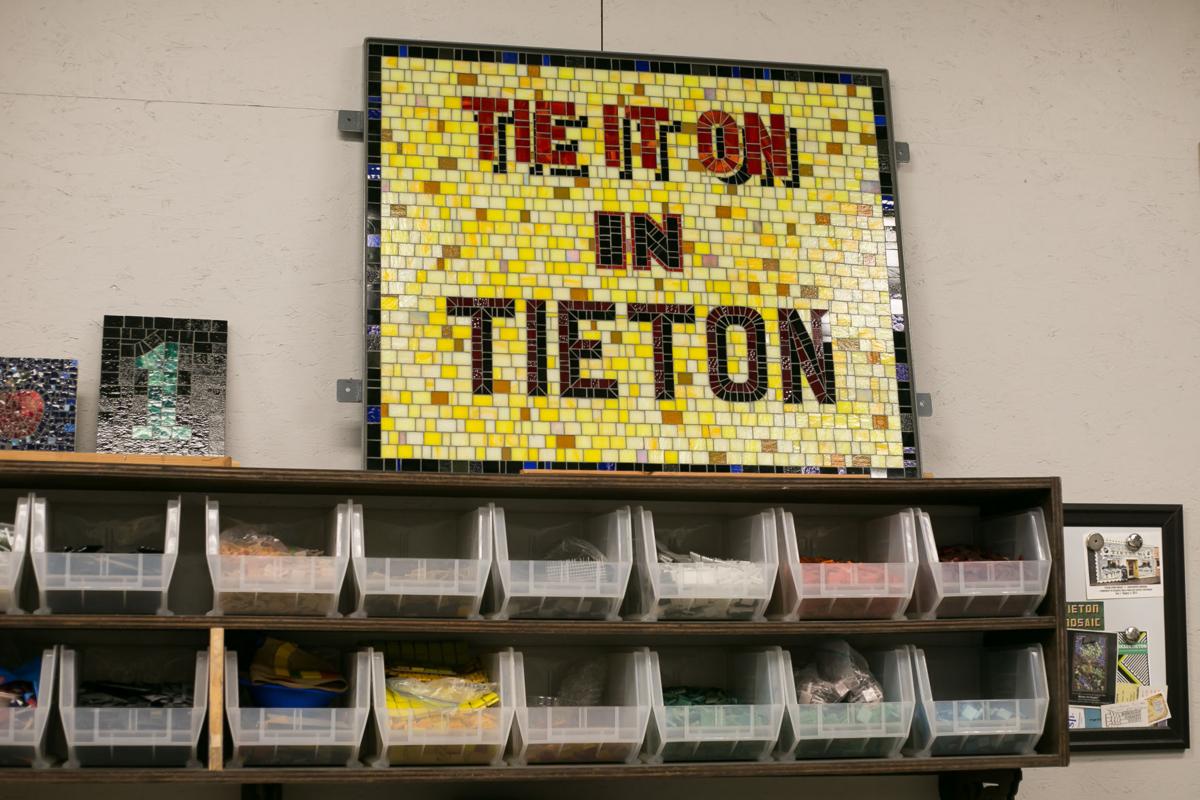 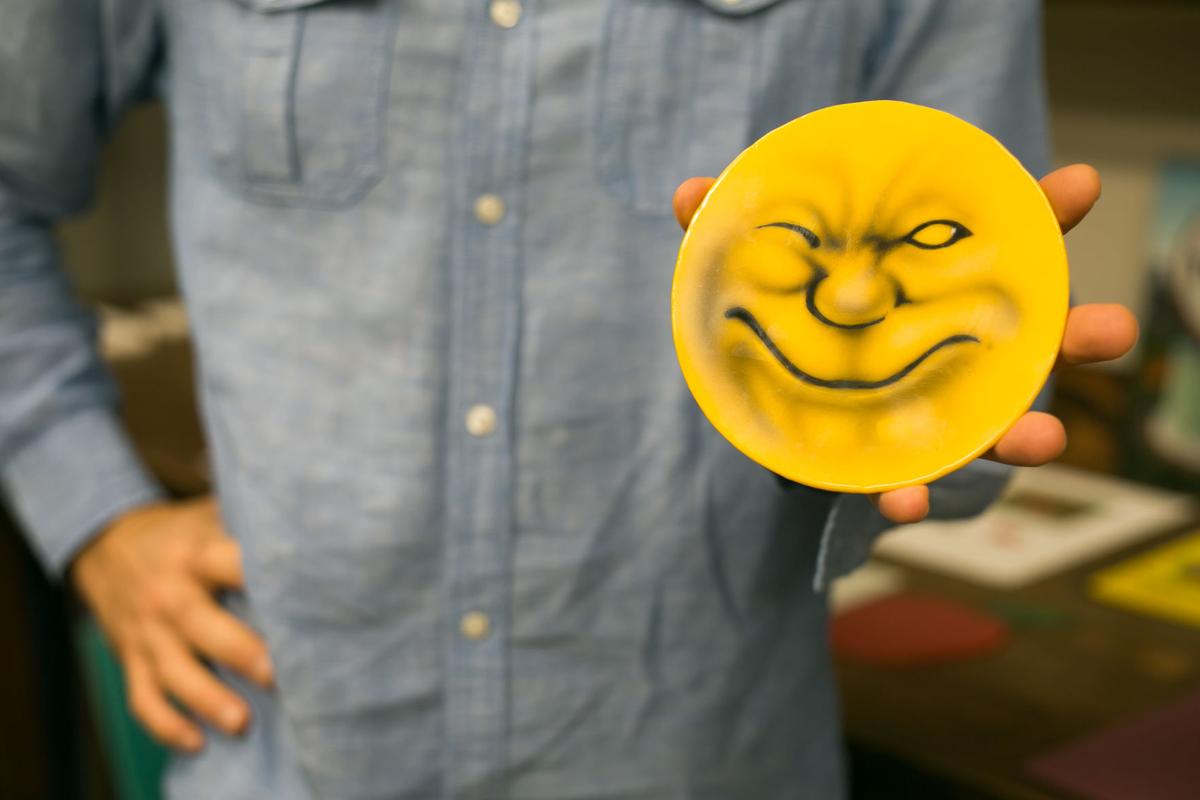 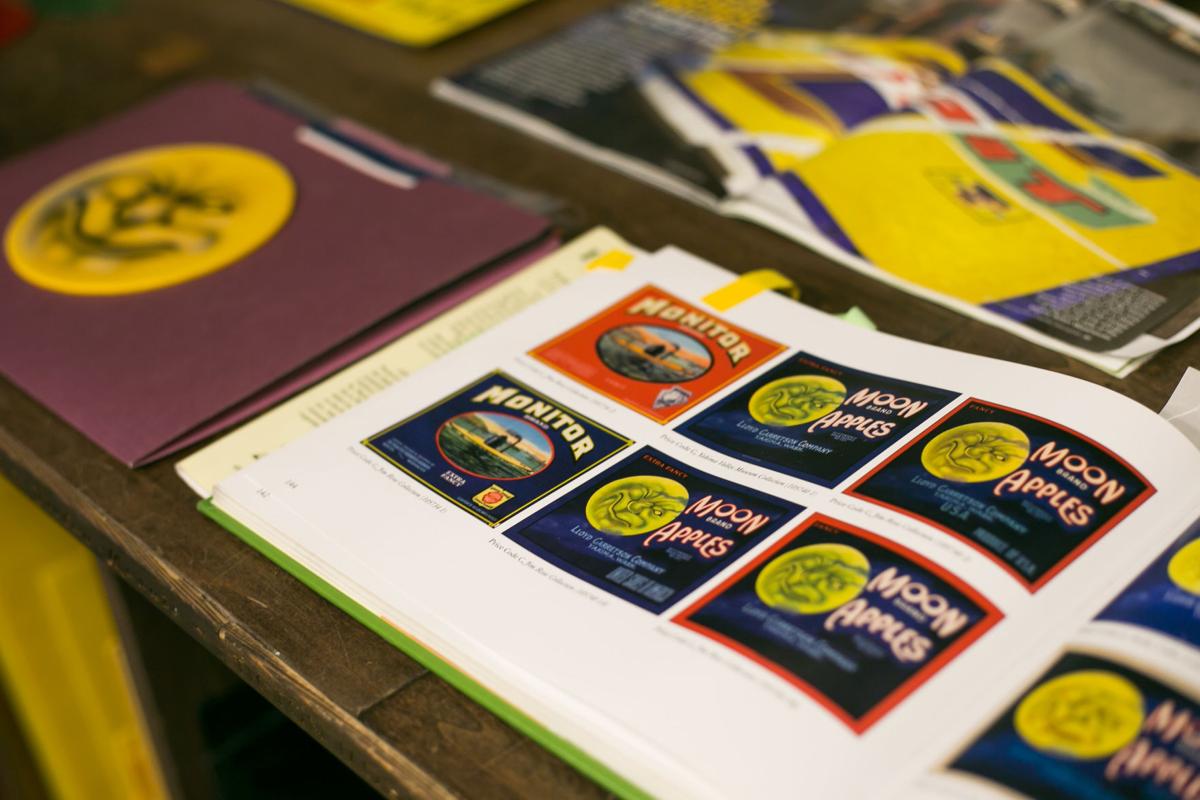 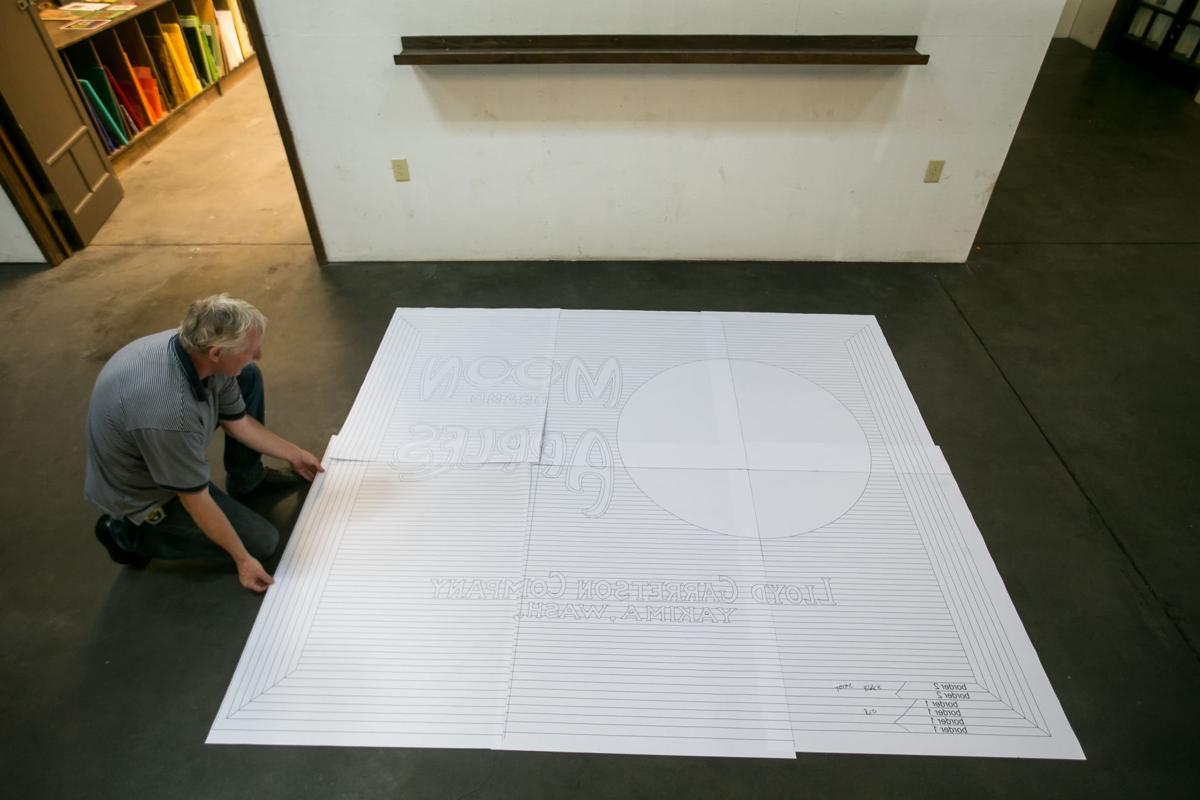 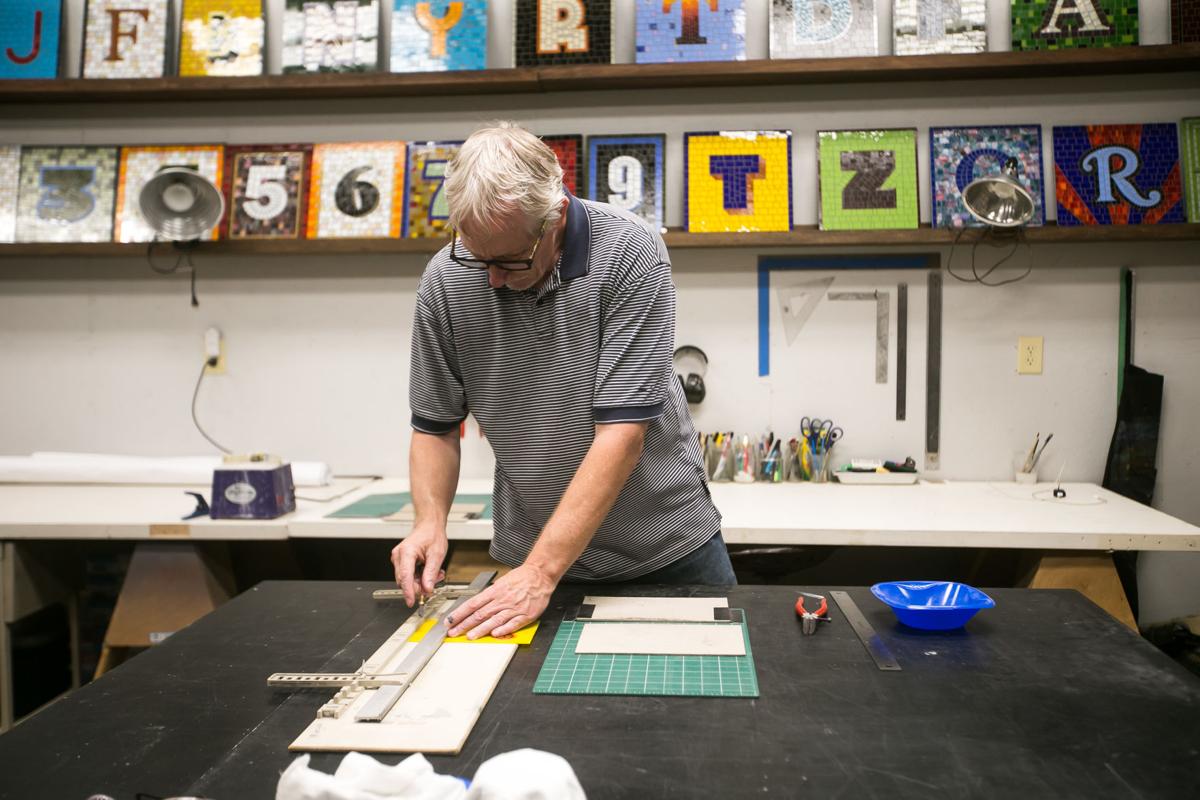 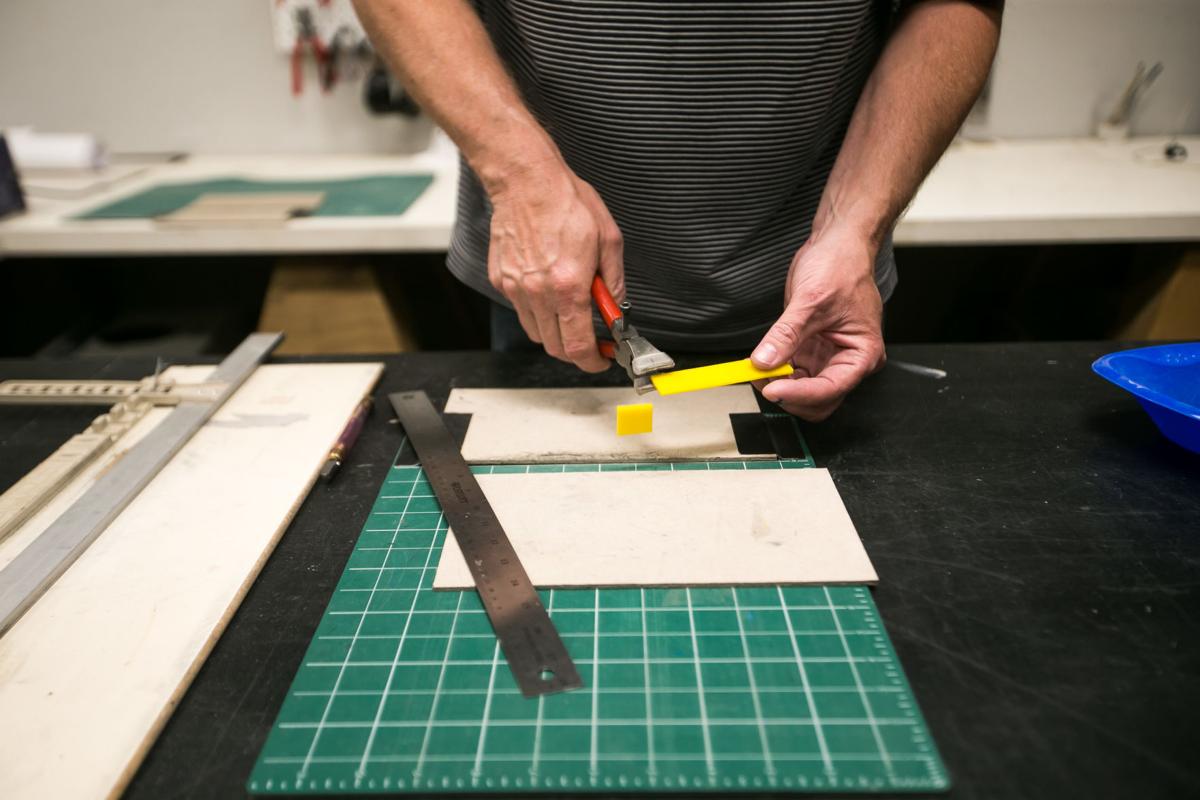 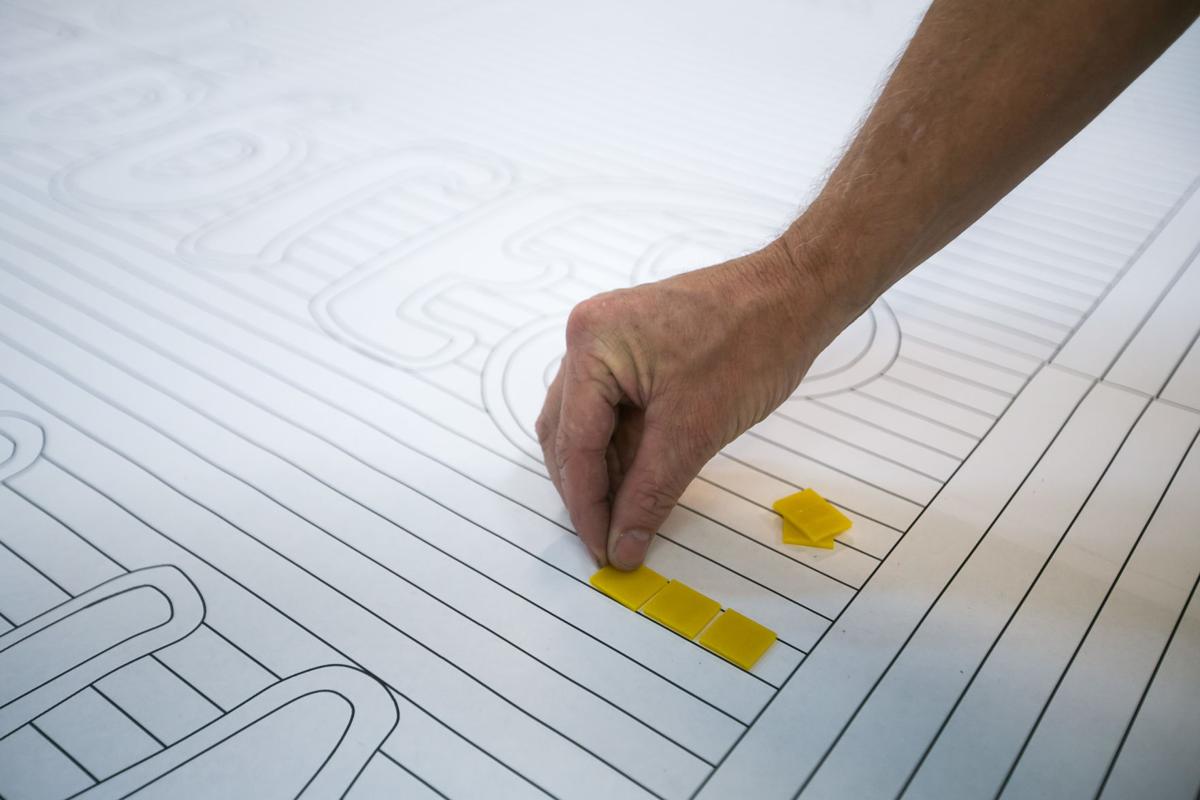 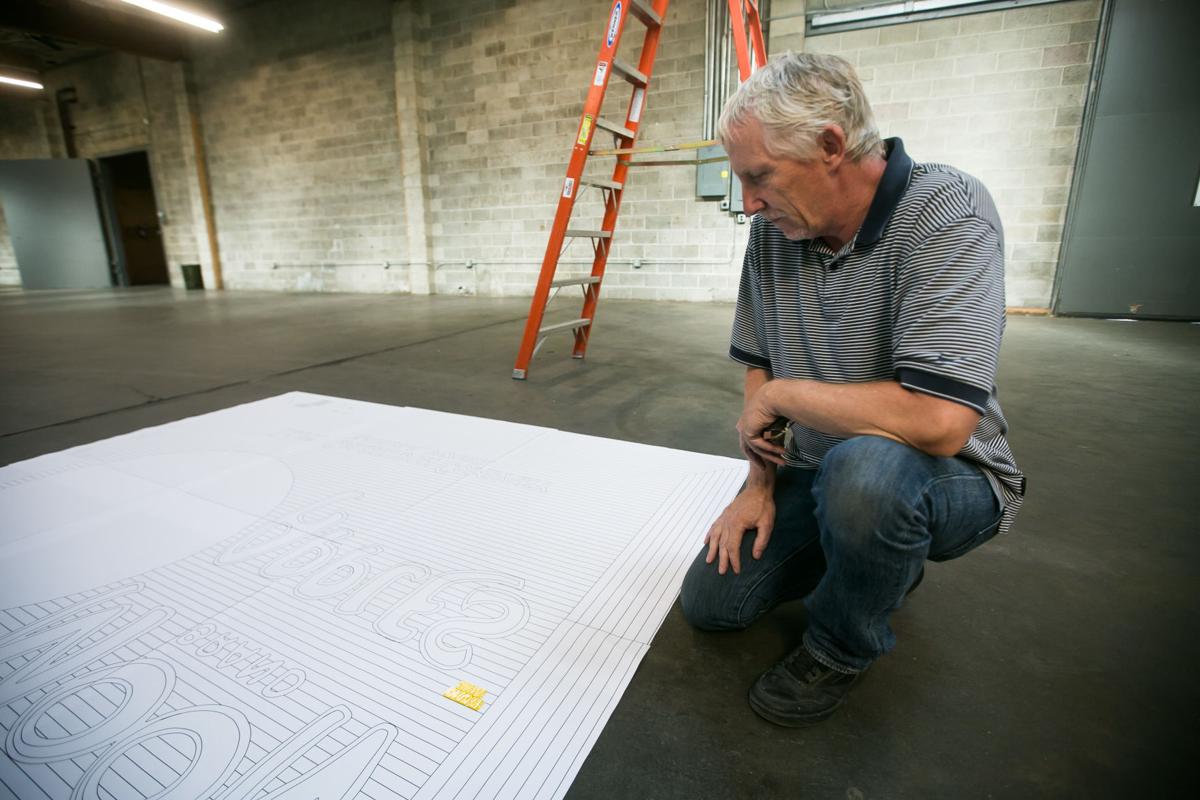 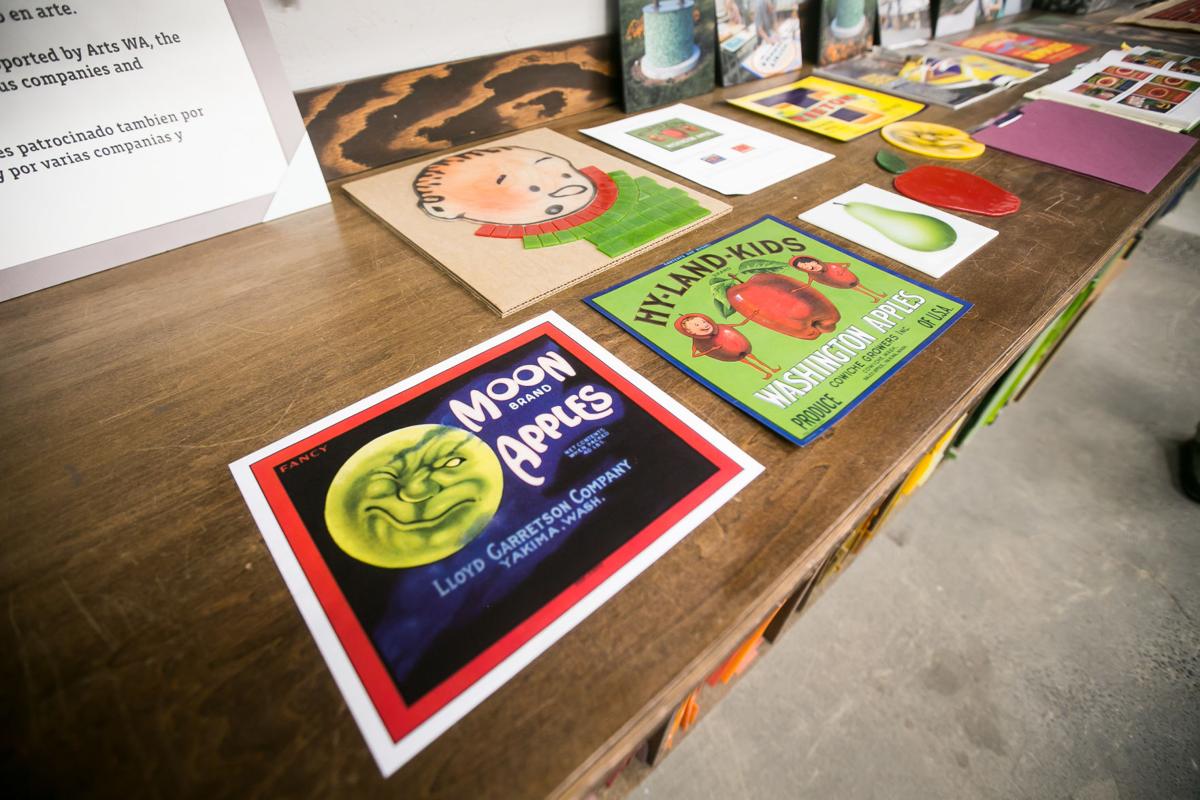 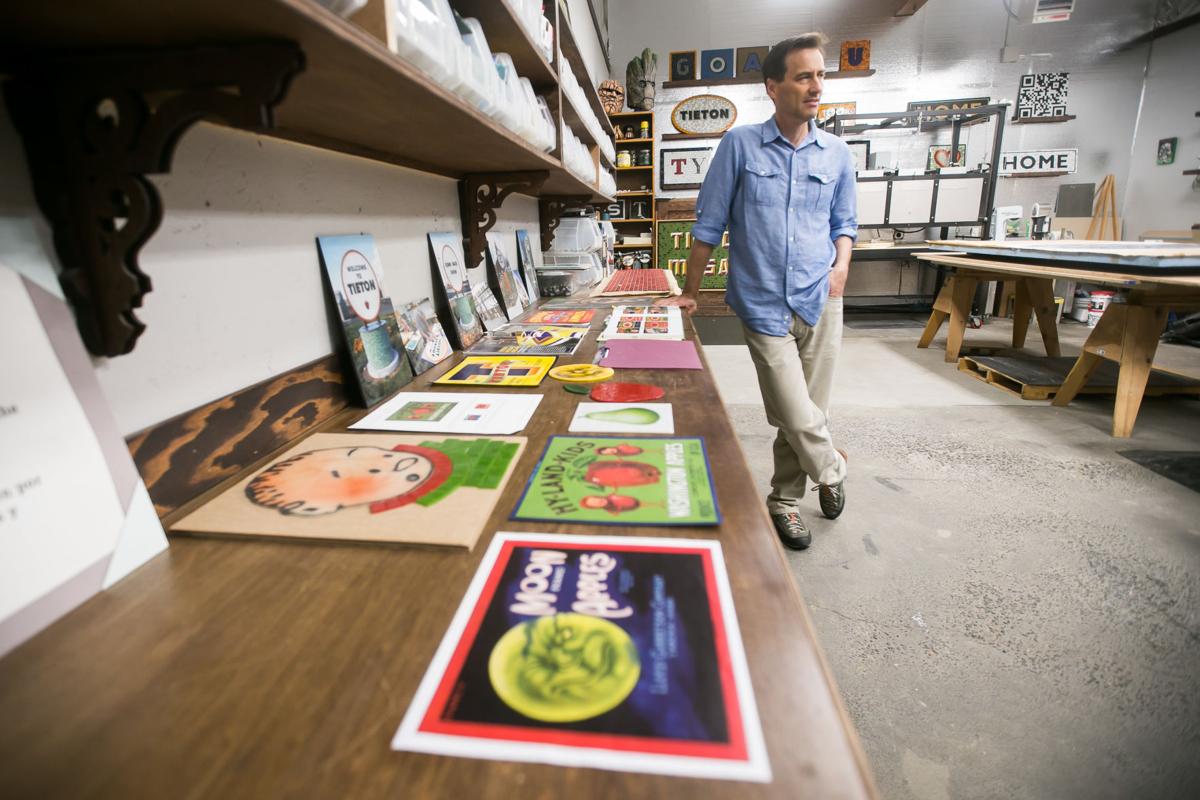 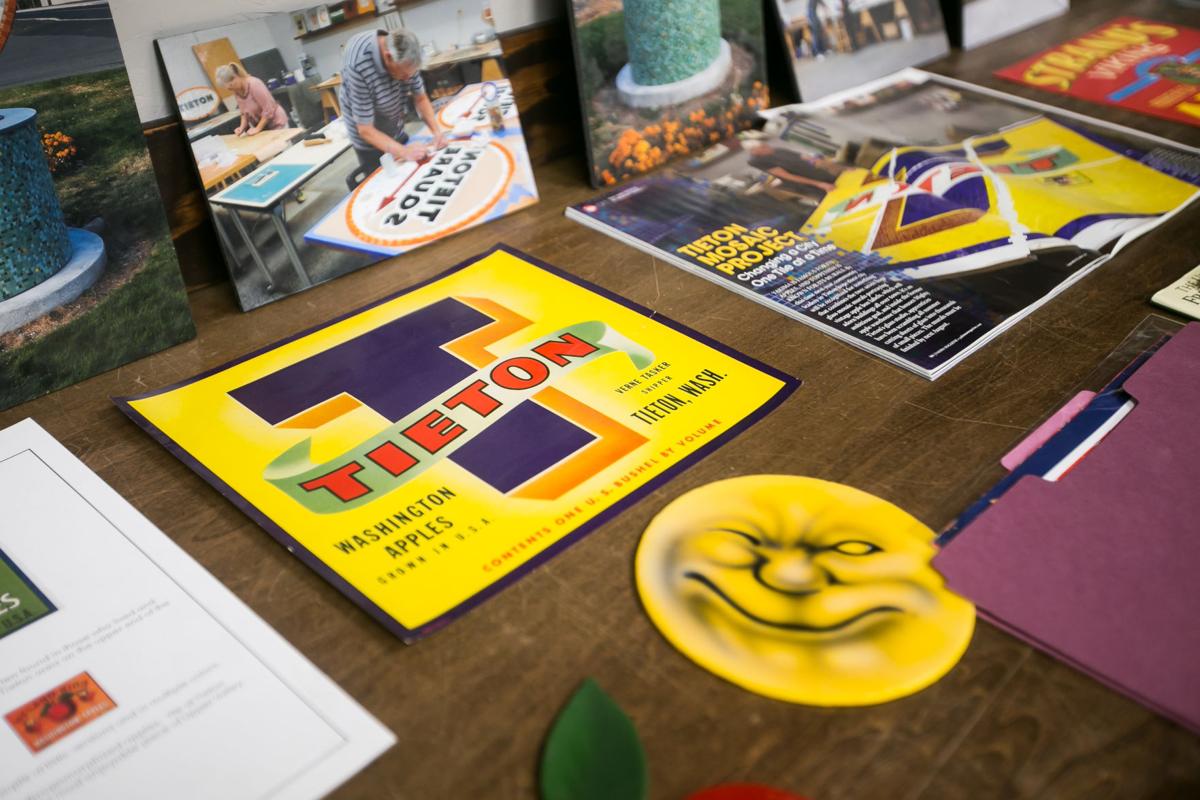 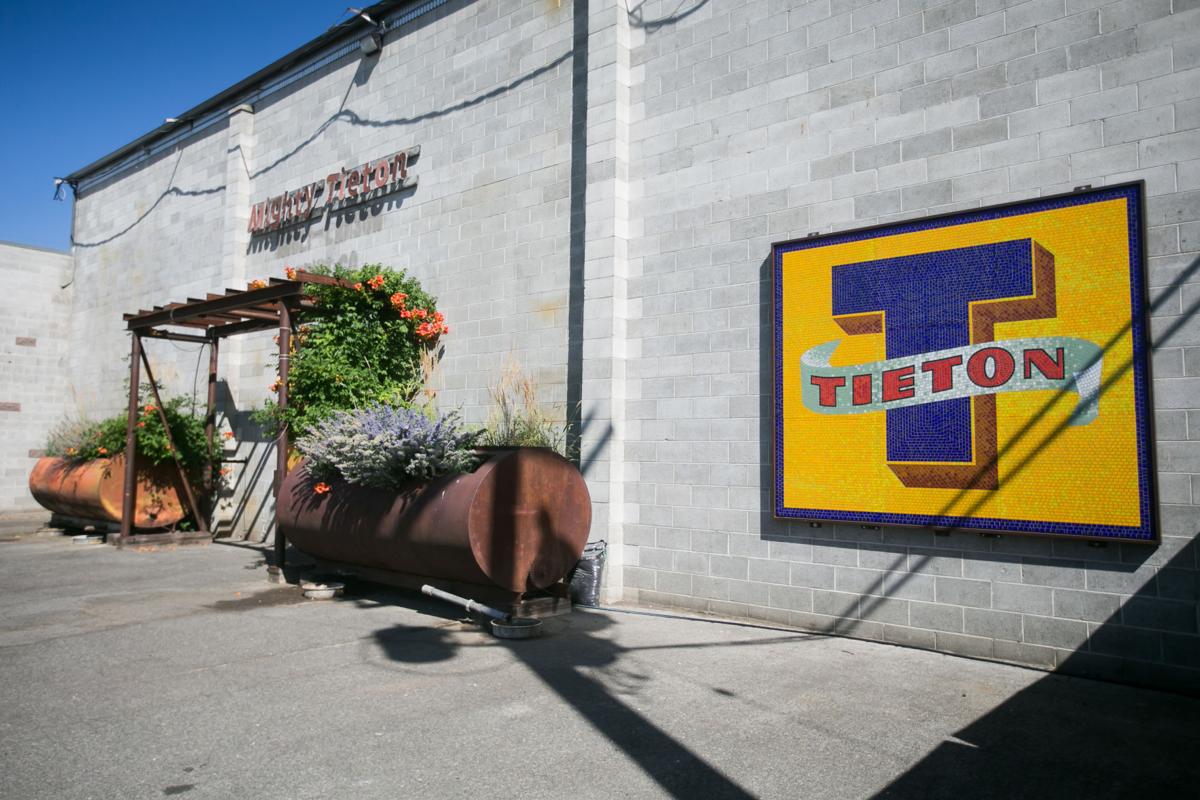 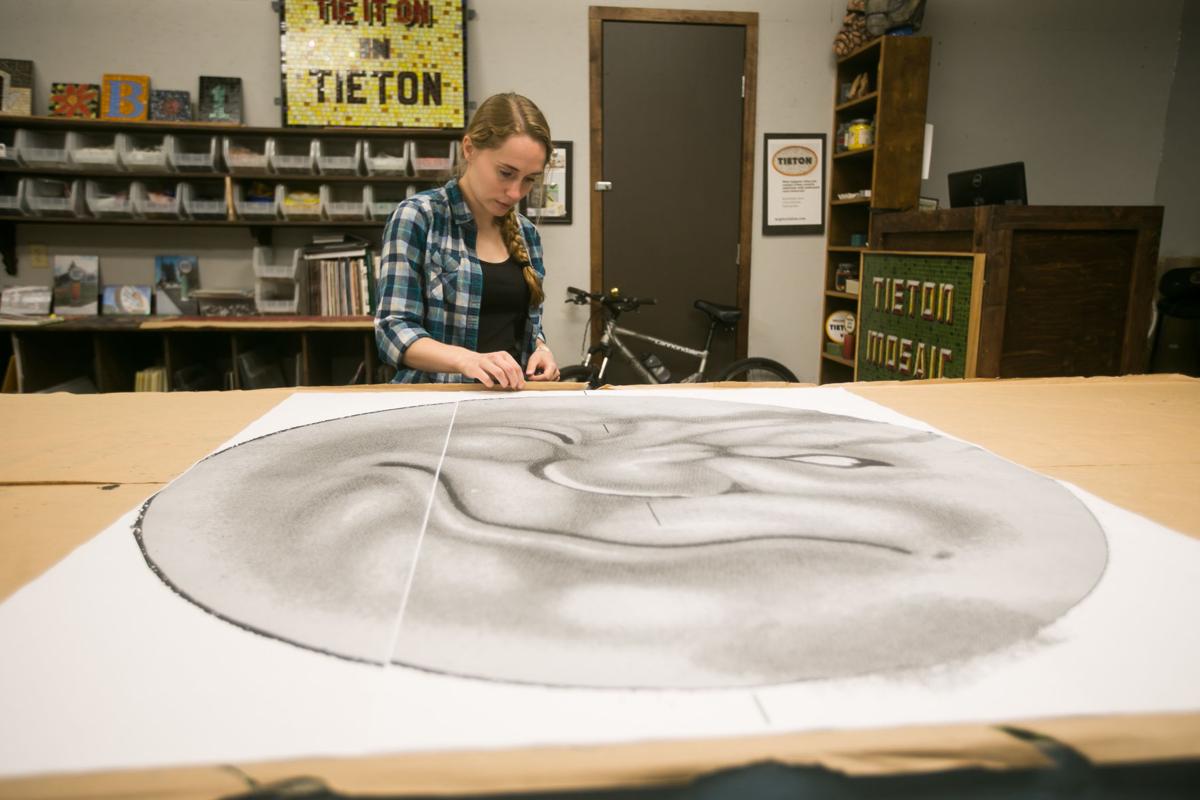 TIETON, Wash. — Many Yakima Valley produce labels created over the years feature dogs and cats, cows and horses, kids and adults, wildlife and scenery along with all those luscious fruits and vegetables.

The Lloyd Garretson Co. of Yakima chose a large Man in the Moon for its Moon brand apples. The label, which features a smiling, winking yellow-green moon, is getting renewed attention in the Tieton Mosaic studio, where it’s being re-created on a much bigger scale.

Members of the Garretson family commissioned the Moon brand label as one of seven mosaic billboard reproductions of historic Valley fruit labels. When finished in mid- September, the Garretson label mosaic, which will measure about 8 feet wide and 7 feet tall, will be mounted on the wall of the Boxx art gallery, which faces Tieton City Park.

“We paint it, we fire it (in sections), we put it back together. Firing it fuses the glass particles in the paint to the moon. It will never fade,” Armstrong said.

Like the Garretson label mosaic, the remaining billboards will be mounted on buildings around the square, noted Ed Marquand, founder of Mighty Tieton, an artisan business incubator.

“Each gets a plaque with a history of the family and the building it’s on,” Marquand said.

Two more mosaic label billboards are in the works. Cowiche Growers Inc. is raising funds to commission its Hy-Land-Kids label, while the nonprofit Tieton Arts & Humanities plans a Kickstarter campaign in mid-September to re-create the Tie-It-On terrier label.

When the organization was awarded a $45,000 National Endowment for the Arts grant in the summer of 2017, it was given until August 2018 to complete the seven billboards. Marquand noted at the time that supporters would have to raise “a lot of money to complete the project, from $100,000 to $150,000.”

The nonprofit sought and got another year due to other fundraising efforts.

“Because of all the fundraising for the (Yakima Central Plaza), we asked the National Endowment for the Arts for another year to complete the seven,” Marquand said.

The first mosaic label, a blue capital T and a ribbon with Tieton in red letters, debuted in August 2017. It hangs on the Mighty Tieton warehouse.

“The whole thing with Tieton is we’re trying to figure out what businesses can make sense,” he said. “But I think the mosaic project has the potential to attract national attention.”

In giving the grant to Tieton Arts and Humanities for the fruit label mosaics projects, the NEA saw a potential for addressing the national issue of what happens to small, struggling towns, Marquand noted.

“It’s not just a cool art project. It really is looking at potential ways of (addressing) this problem,” he said.

The large fruit label mosaics will use history to attract tourists, similar to the historical murals in Toppenish. But while those murals highlight the Old West and people long gone, many of the families that built the agricultural industry are still in the area, Marquand noted.

“It’s a much more contemporary, modern history,” he said.

Along with the billboards, small supporter tribute plaques will offer an opportunity for others to contribute and add their history to the project as officials continue to seek fruit labels to recreate as mosaics.

“We have other proposals out to other companies and other families,” Marquand said. “We’re hoping they will step forward and participate.”

• Tieton Mosaic is designing and fabricating seven mosaics based on classic fruit labels from Central Washington. The mosaics of varying dimensions will be made of glass and ceramic tiles and mounted outside on buildings around Tieton City Park.

• A plaque accompanying each mosaic will describe the history of that label and the families and companies whose hard work and commitment made the area so important and productive, the brochure notes.

• Sponsorships and financial contributions are welcome and are tax deductible. Contact Edward Armstrong at edwardintieton@gmail.com or 206-599-9599.

• Keep informed about the project by signing up for newsletters at www.tietonmosaic.com.

TIETON, Wash. -- Of the many fruit labels created for Tieton orchardists from the 1930s through the 1960s, few are as familiar as the Tie-It-O…