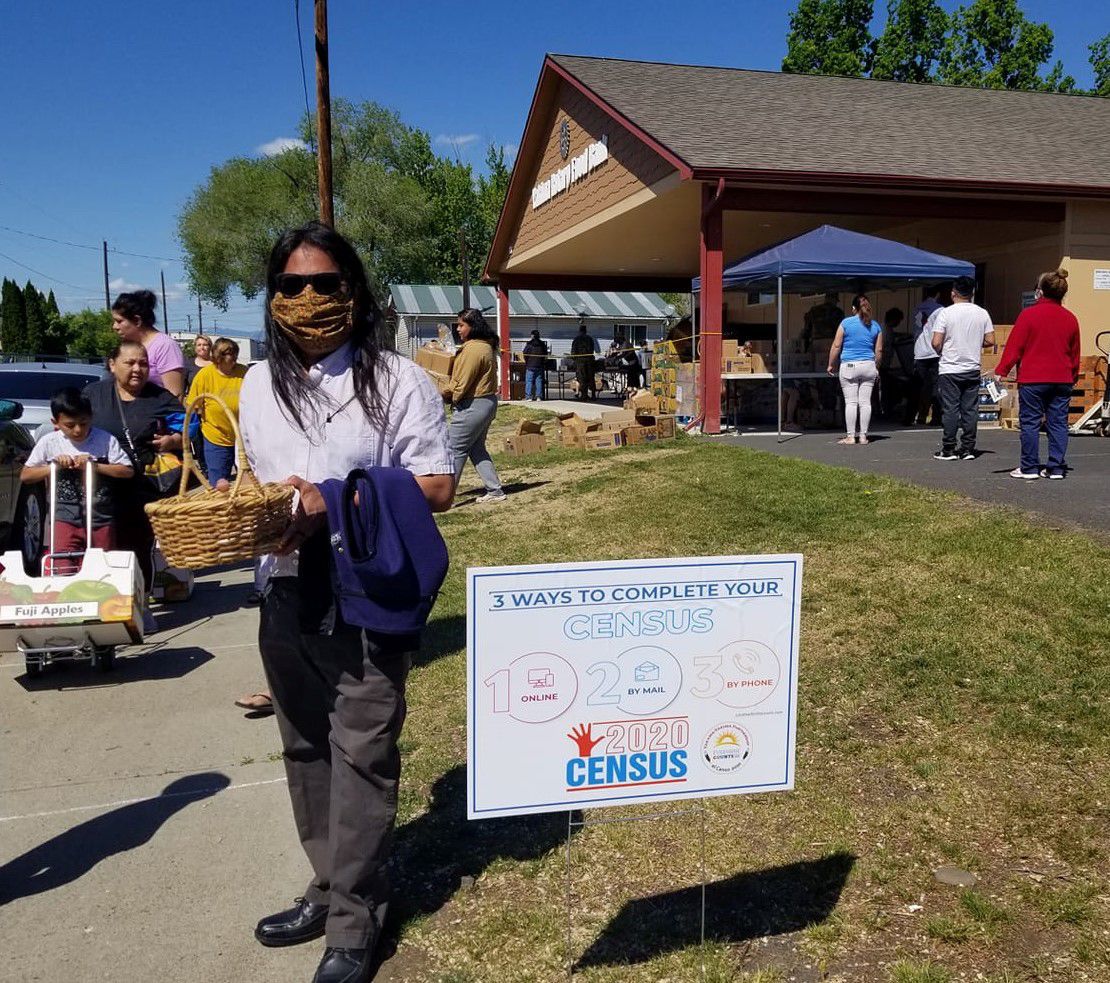 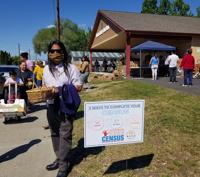 Paul Tabayoyon sharing census information at the Yakima Rotary Food Bank on Fridays. The food bank is at the Henry Beauchamp Community Center. Volunteers distribute food to over 600 families in four hours, from 8 a.m. to Noon. 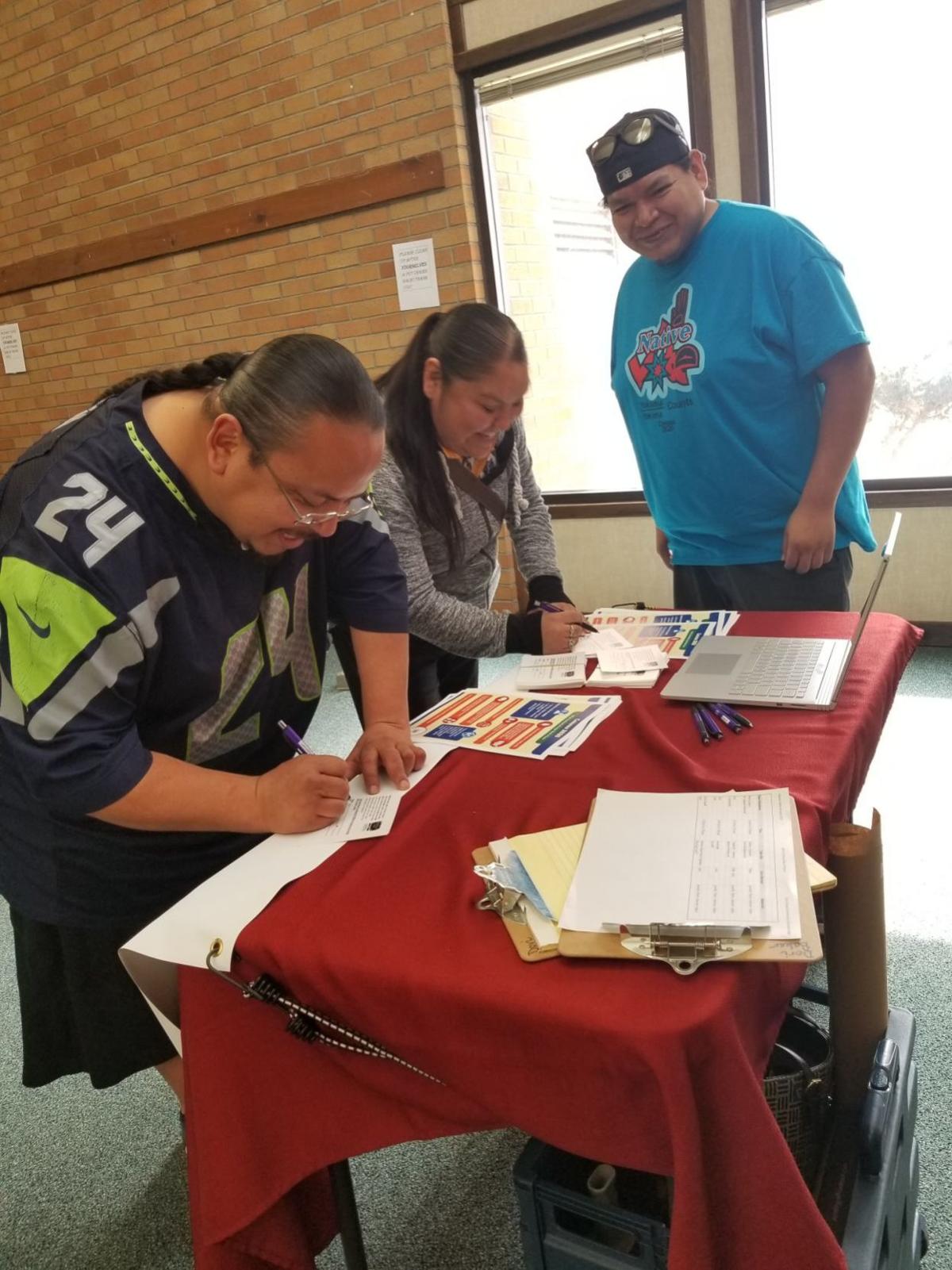 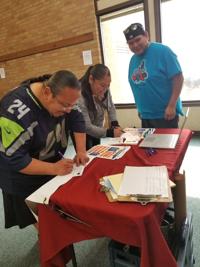 Asa Washines sharing census awareness information at the Tribal Agency in Toppenish, signing pledge cards to support the legislative ask for $15M to support the 2020 Census.

Paul Tabayoyon sharing census information at the Yakima Rotary Food Bank on Fridays. The food bank is at the Henry Beauchamp Community Center. Volunteers distribute food to over 600 families in four hours, from 8 a.m. to Noon.

Asa Washines sharing census awareness information at the Tribal Agency in Toppenish, signing pledge cards to support the legislative ask for $15M to support the 2020 Census.

Three Yakima County organizations received close to $121,000 in grants for outreach efforts to ensure the community has a complete count in the 2020 census.

Routine census efforts were sidetracked by the coronavirus in March. Census takers weren’t able to visit households in person or drop off paper questionnaires.

Census data will determine the distribution of billions of federal funds for community efforts, including funds for roads and schools, for the next 10 years.

Yakima leaders have stressed the importance of a complete count of the county’s population, particularly since a rural population, communities of color and low-income residents are risk factors for an undercount.

Meanwhile, the Yakama-Yakima el Censo 2020 Coalition — a grassroots group of local agencies that banded together last year to raise awareness — has been busy with its own outreach efforts.

As of Friday, Yakima County’s response rate matched the national average of 59% but lagged behind the state rate of about 65%.

The Washington Census Alliance announced $320,000 of grants at the beginning of May to 26 statewide organizations serving communities of color who also had plans to reach those historically undercounted in the census. Funding for the grants came from the state Office of Financial Management’s Census Education and Outreach program, in partnership with the Seattle Foundation, the Na’ah Illahee Fund, the Latino Community Fund and Washington Progress Fund.

Nuestra Casa in Sunnyside and La Casa Hogar in Yakima, both of which serve Spanish speaking clients, received about $54,000 each. Yakima Pride, a nonprofit celebrating Yakima’s LGTBQ community, received $12,800.

Joshua Hastings, vice president of Yakima Pride, said the organization will focus funds on ensuring the LGBTQ community participates in the census.

“Although the census doesn’t explicitly ask about our sexual orientation and gender identity, it is still critical for us to be counted,” he said.

Caty Padilla, executive director for Nuestra Casa, said the nonprofit is using a “trusted messenger” approach to getting information to Spanish speaking households. Padilla said Nuestra Casa is using the grant funding in part to pay 13 trusted messengers to share information with their existing networks, including families, friends and co-workers.

“People are more likely to trust someone they know,” Padilla explained. “The trusted messengers become that link, and that’s how we’re building the web.”

La Casa Hogar also is using trusted messengers, with 10 in its network. Executive Director Laura Armstrong said the two nonprofits already had reached 290 households with information about the census as of Wednesday.

Prior to the pandemic, the nonprofits had planned to reach families at churches, libraries and during other community events. But with social distancing recommendations, they’ve shifted their efforts to social media posts and radio announcements. The nonprofit also is partnering with Yakima School District to distribute information about the census to families who pick up lunches for their children. La Casa’s Census Coordinator, Claudia Zepeda, is creating videos that show people how to fill out the census forms.

Despite their efforts, Armstrong said the response rate needs to increase.

“There definitely needs to be more response, especially in Central Washington,” she said. “We see the impact of the work that’s been done by our groups, our coalition and the statewide coalition, but we also see a lot of work that still needs to be done.”

Members of the Yakama-Yakima el Censo 2020 Coalition have been busy printing and distributing postcards with information about the Census, in English and Spanish, and hanging bright blue banners throughout the Valley to raise awareness.

Dori Peralta-Baker, a coalition member who also is the Yakima chair of the Asian Pacific Islander Coalition, said one banner has been hung at Key Bank on Yakima Avenue. Three more will be hung in Toppenish, Sunnyside and White Swan.

The banner hung at Key Bank was sponsored by the League of Women Voters Yakima County.

“While people are waiting for their food, they are reading,” she said. “It’s been a good outreach strategy.”

Paul Tabayoyon, a coalition member also with Asian Pacific Islander Coalition, said emphasizing community values and services has been an important focus to counter resistance to participating. The coalition also has been using trusted messengers — seven with the Asian Pacific Islander Coalition and 12 to reach tribal members — to reach other underrepresented populations in the Yakima Valley.

Peralta-Baker said the other good news is the Census Bureau has extended the deadline to respond to the census from June to Oct. 31.

“We’ve got the summer to get people to respond to the census,” Peralta-Baker said. “We are building a firm foundation of trust right now by helping people through the pandemic, so the response to the census should be better than it was in 2010.”

The U.S. Census Bureau resumed some field operations in Yakima last week, with workers dropping off census invitation packets at front doors in areas where a majority of households don’t receive mail.

The effort is expected to reach about 5% of households statewide. The efforts started March 15 but halted on March 18 due to concerns about COVID-19.

Resources for those still needing to participate in the Census:

This information box has been updated.