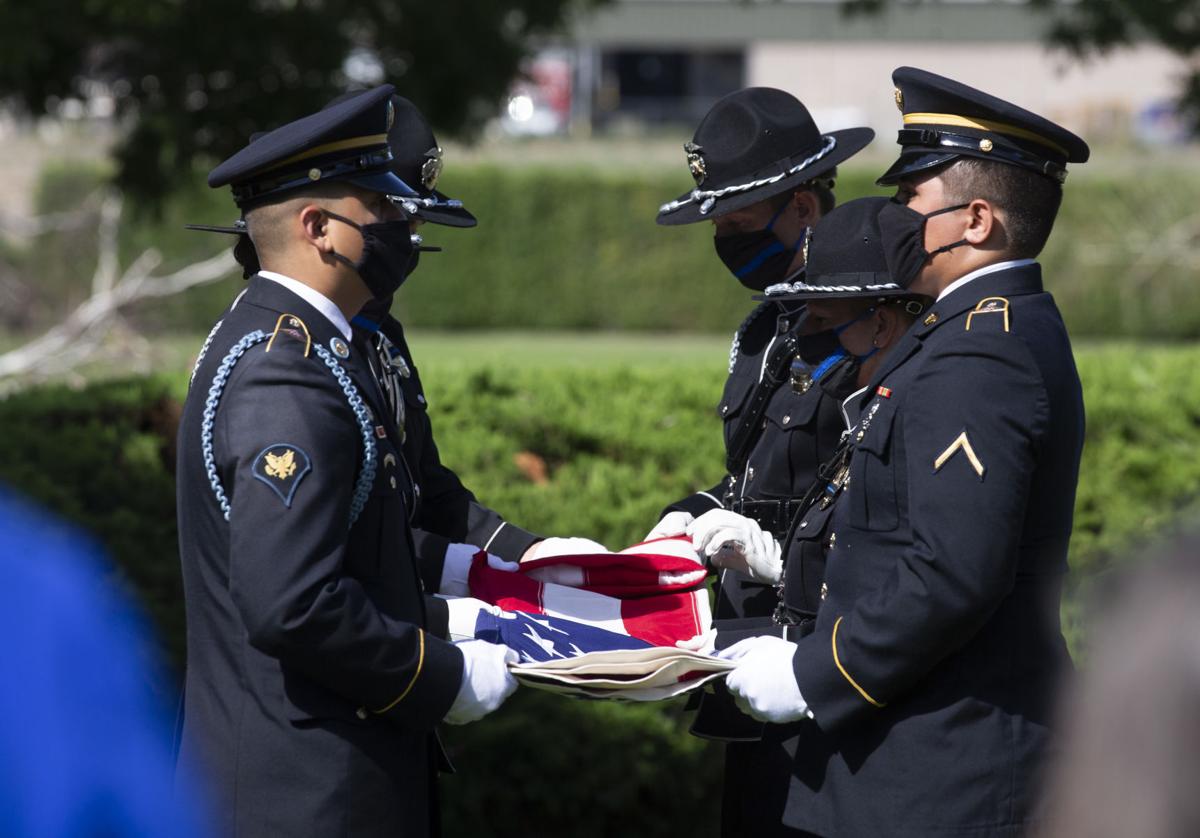 The honor guard folds an American flag at the funeral for Yakima County Department of Corrections officer Daniel Oaks on Saturday, Aug. 22, 2020 at Terrace Heights Memorial Park in Yakima, Wash. 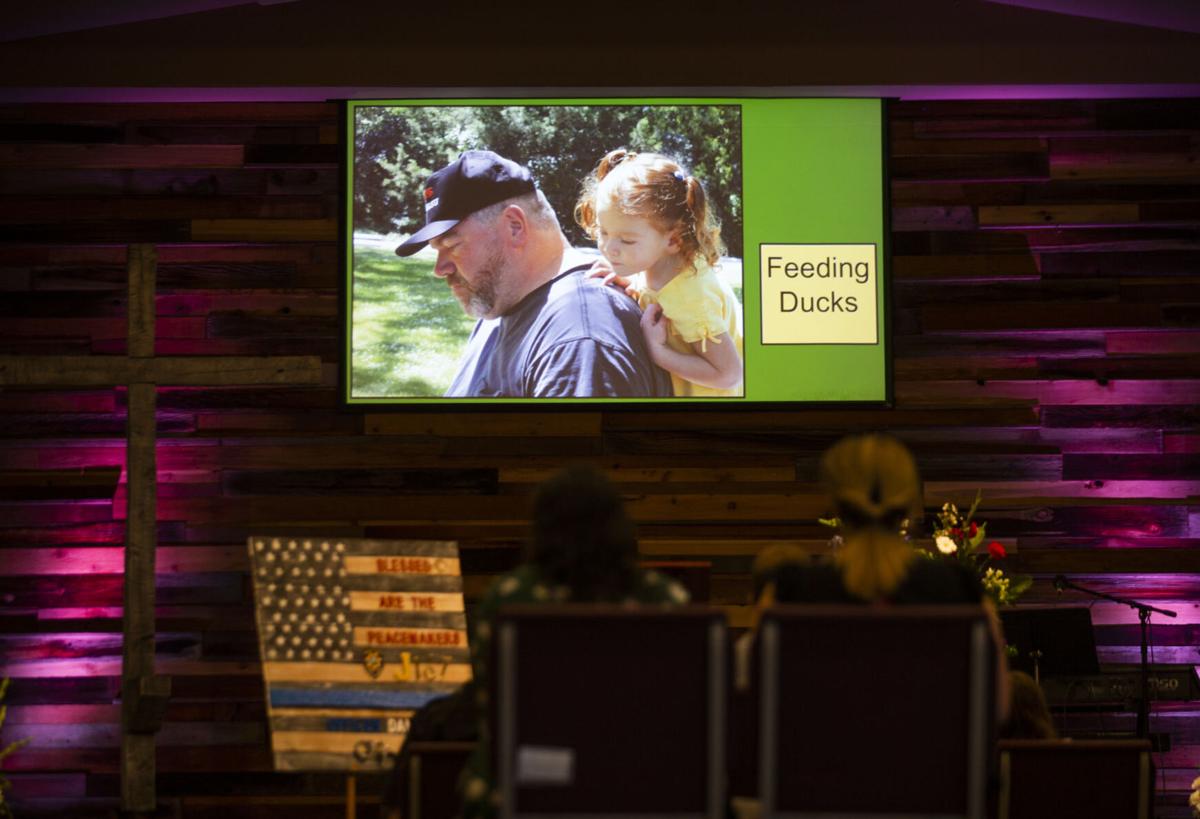 A slideshow of photos plays during the funeral of Yakima County Department of Corrections officer Daniel Oaks on Saturday, Aug. 22, 2020 at Valley Life Church in Yakima, Wash. 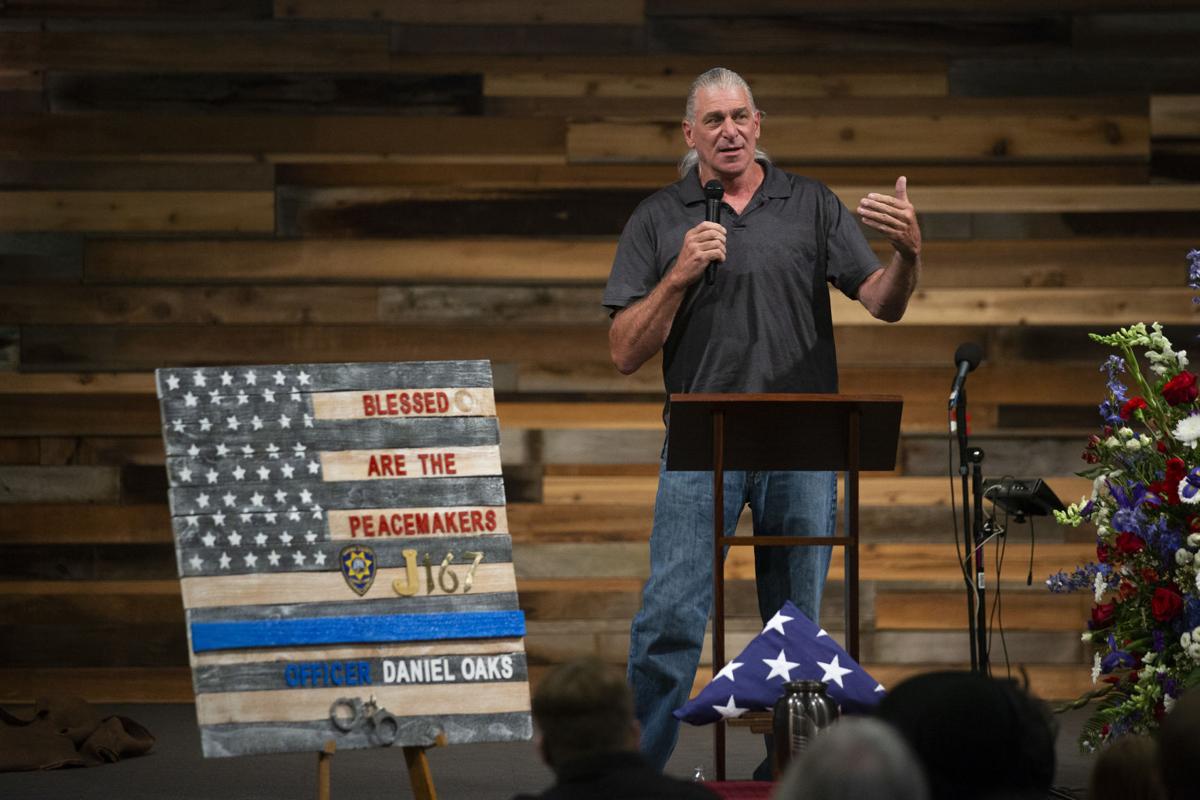 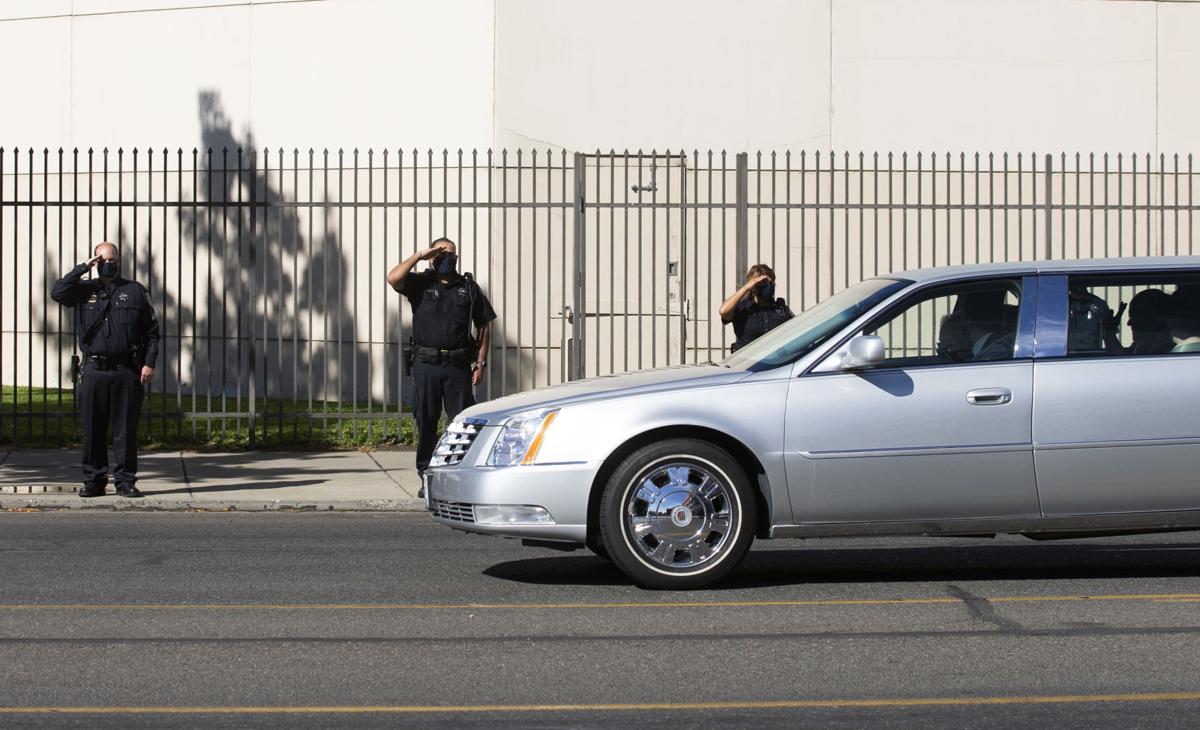 The funeral procession for Yakima County Department of Corrections officer Daniel Oaks makes its way past the Yakima County jail on Saturday, Aug. 22, 2020 in Yakima, Wash. 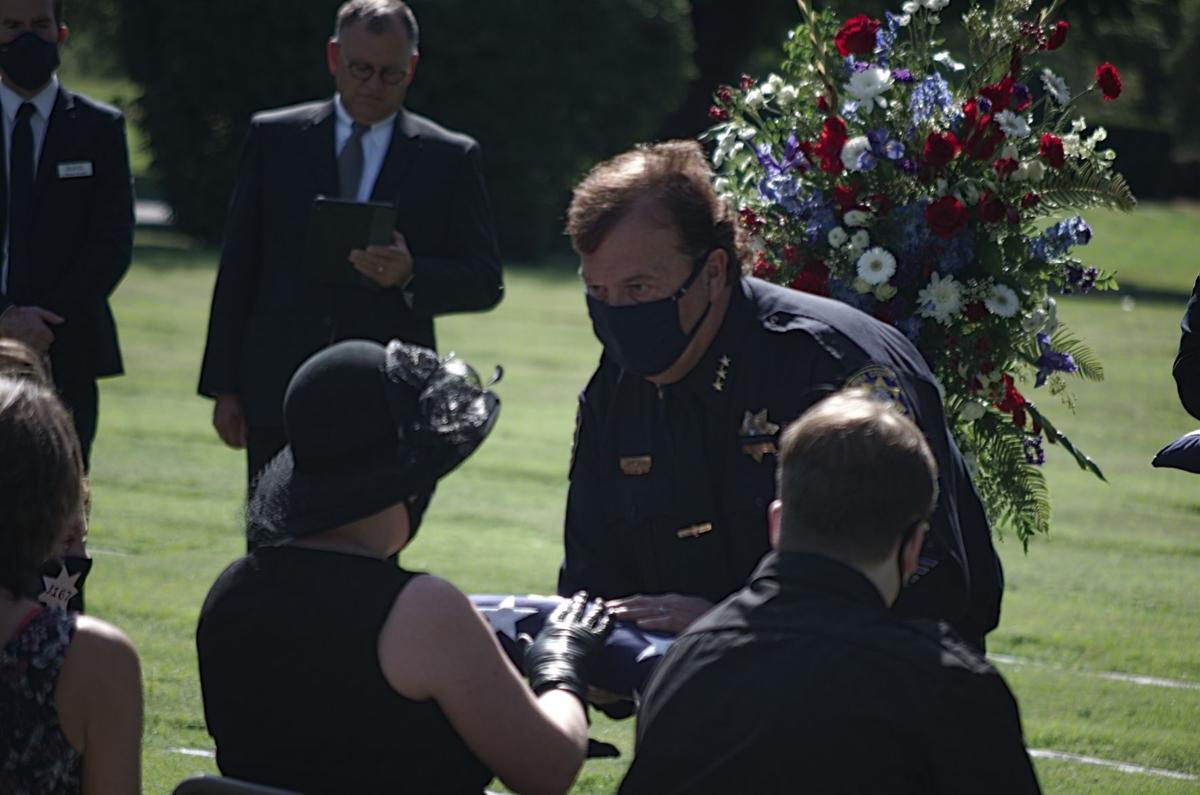 The honor guard folds an American flag at the funeral for Yakima County Department of Corrections officer Daniel Oaks on Saturday, Aug. 22, 2020 at Terrace Heights Memorial Park in Yakima, Wash.

A slideshow of photos plays during the funeral of Yakima County Department of Corrections officer Daniel Oaks on Saturday, Aug. 22, 2020 at Valley Life Church in Yakima, Wash.

The funeral procession for Yakima County Department of Corrections officer Daniel Oaks makes its way past the Yakima County jail on Saturday, Aug. 22, 2020 in Yakima, Wash.

Friends and family remembered Yakima County Corrections Officer Dan Oaks as a gentle giant who loved God and his family.

“In my friend, I saw the best a man could be,” said Officer Jacob Reed, who worked with Oaks at the Yakima County jail.

Oaks, 58, died Aug. 1 of COVID-19, and is the first officer in the Yakima County Department of Corrections to die in the line of duty, DOC Director Ed Campbell said. At the time of Oaks’ death, the jail was experiencing a novel coronavirus outbreak, with 34 officers and 130 inmates infected.

Oaks’ family and friends conducted a small funeral service at Valley Life Church — the same church where Oaks met his wife, Joy — followed by a graveside service at Terrace Heights Memorial Park. His procession circled the Yakima County jail where he worked for 15 years.

At the cemetery, Oaks received full honors as a law enforcement officer and an Army veteran. Oaks’ fellow corrections officers lined the cemetery entrance, where Yakima Fire Department hoisted a large flag to salute him as the procession arrived. At the grave, a state Department of Corrections Honor Guard fired rifle volleys while Army soldiers and Yakima Police Department’s Honor Guard folded an American flag, which Campbell presented to Oaks’ wife.

Many of those attending the funeral wore face masks that bore Oaks’ badge number — J167.

Born in The Dalles, Ore., Oaks was in the middle of a family of six boys and two girls. He paid careful attention to the actions of his older siblings, not so much because they were role models, his brother Steve said.

“When we were growing up, he used to watch us older kids — this was his ‘research’ — and he learned from watching us to decide what to do or not to do based on what us older kids got,” Steve Oaks said.

Oaks was a graduate of Davis High School, where he became a track star, specializing in the discus throw. Jim Oaks, one of his younger siblings, recalled telling Oaks that football would be a better sport for him because of his large size — Oaks was 6 feet, 4 inches tall — but he insisted on doing track, spending hours practicing on the discus.

That practice paid off, as Oaks would regularly throw more than 200 feet, Joy Oaks said, and established a Davis High record that has yet to be broken.

Jim Oaks said while his brother had the confidence of a winner, he would not gloat about it.

Oaks had dreams of competing in the Olympics, but they were derailed by a calf injury, his wife said. But he never really gave up the sport, and he coached discus for high schools.

Steve Oaks said his brother also looked into various religions before settling on Christianity and had a good relationship with God.

Oaks served in the Army, first training as an infantryman and reenlisting as an optical technician and serving in Operation Desert Storm in 1991, his wife said.

Valley Life Pastor Joe Hite recalled Oaks “wandering in” to the church wearing polished Army boots. But, Hite said the polish on Oaks’ boots would wear off and stain the carpet — a problem he and other church members were reluctant to talk to him about.

“Everybody’s going, ‘I’m not talking to him, he’s a giant. He might stuff me in the trash can,’” Hite recalled.

But Hite said he and the other parishioners soon learned that Oaks was a “giant teddy bear,” who was popular with the children in the congregation.

“He was like a child magnet. Kids of all ages would attack him and wrestle,” Joy Oaks recalled. “He played as intensely as the kids wanted, letting them set the pace. ... Everyone would end up laughing in the midst of the fracas.”

Steve Oaks said his brother believed working at the jail was where he was supposed to be in God’s plan.

Reed described the jail as a “dark place” where “empathy and kindness go to die,” affecting both inmates and some who worked there.

“Dan was different. Dan never gave into that darkness,” Reed said. “Dan was the light of the world, that city that was set on a hilltop that could not be hid.”

Joy Oaks said her husband treated inmates with respect, acknowledging that they were not that much different than he.

“He would say, ‘I am just one decision away from being just like they are,’” she said. “As one tatted-up gang member said, ‘I would hate to mess with him, but he has a heart of gold.’”

Reed said while Oaks had the ability to physically subdue a combative inmate, he would many times defuse situations using his size without having to resort to physical force.

“When you were on shift with him, and called for backup, you got the best the department had to offer,” Reed said.

Oaks, Reed said, would often talk about his wife and two children, and his love for them, during breaks at the jail with his squad mates. The only fault Reed said Oaks had, in his opinion, was his penchant for listening to electronic and tech music in the jail control room.

Joy Oaks said she was grateful for the support her family has received from the community and her husband’s colleagues.