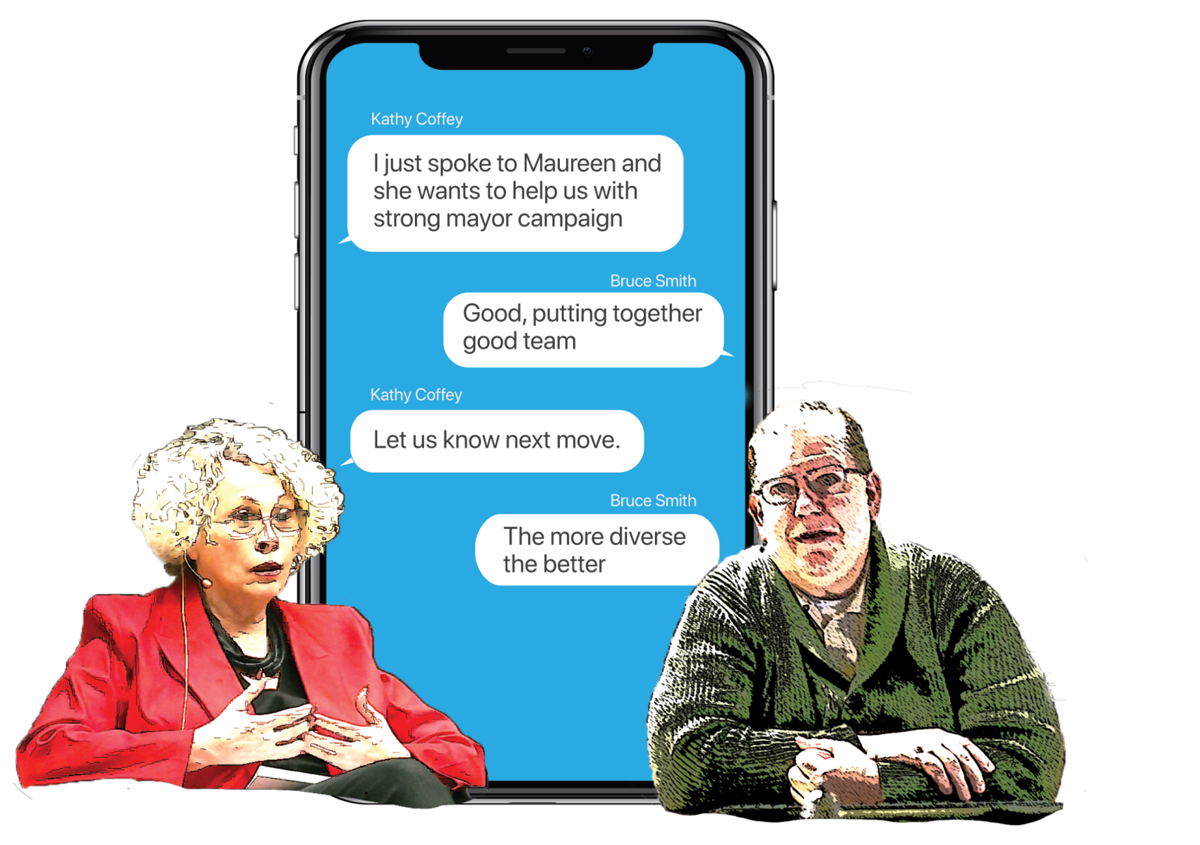 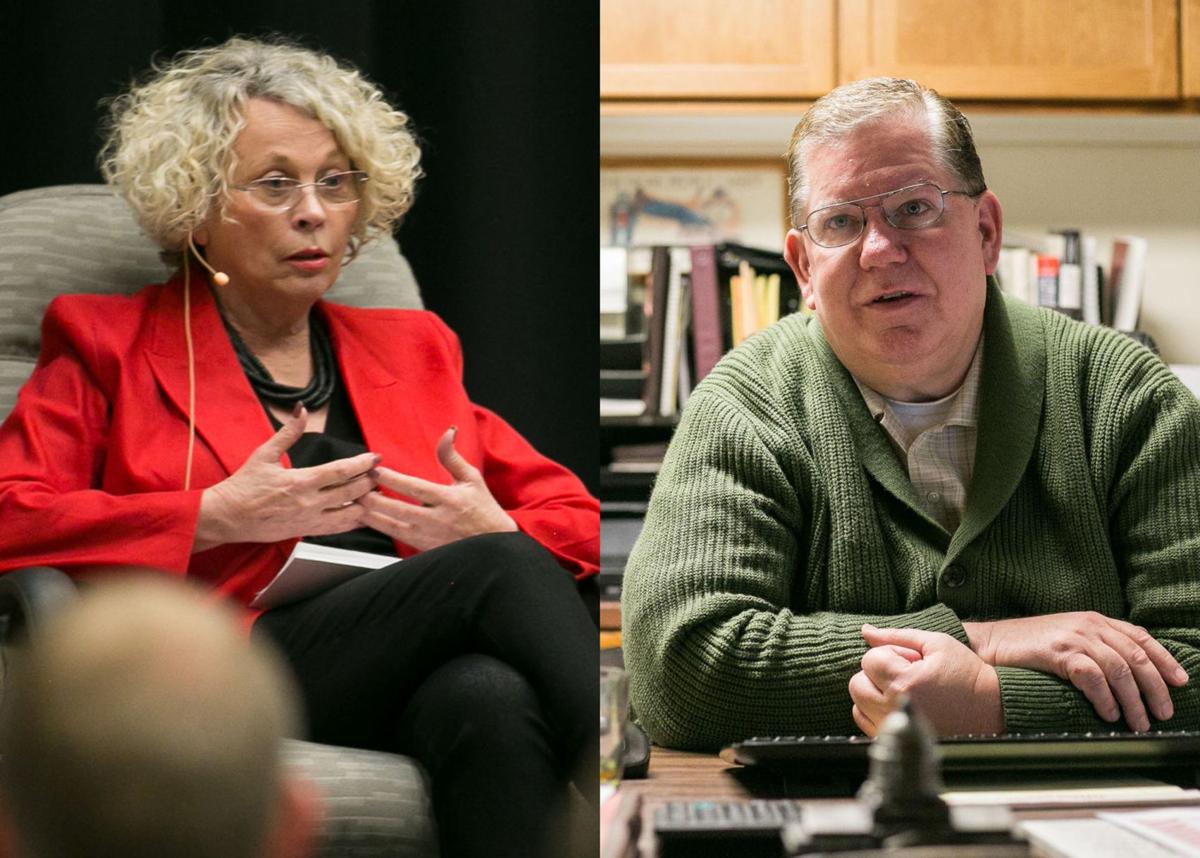 Smith, Leita and Edler asked the council to put a change to a strong-mayor government on the February ballot. Then they drafted a resolution and submitted an edited copy of the charter changes that required voter approval.

More than two dozen community members showed up to speak in opposition to the switch at council meetings, saying a strong mayor government would dilute the votes of Yakima’s Latinos, who make up almost 50% of the city’s population. Only a handful of people spoke in favor of the proposal, including Leita and Smith.

Even so, the council moved staunchly forward, voting 4-3 to place the issue on the February ballot.

Councilwomen Kay Funk, Dulce Gutierrez and Carmen Mendez, who cast the dissenting votes, voiced concerns about who might benefit from the change.

Then, at a Nov. 19 meeting, Gutierrez and Mendez spoke about possible messaging between strong mayor proponents and city leadership.

A series of text messages between Smith and former Mayor Kathy Coffey shed some light on their involvement with the proposal, as well as the tactics used to propel it forward.

The Yakima Herald-Republic obtained 72 pages of text messages between Coffey and Smith through a public records request. Twenty of those pages included conversations related to the strong mayor issue — a total of at least 125 texts over 12 conversations between June 20 and Nov. 18, 2019.

Smith started by giving Coffey a heads-up June 20 that former Councilman Dave Ettl was spearheading an effort to put the strong mayor issue on the November ballot, which Smith said was too soon.

But he added, “We’ll have the votes. Brad Jason Holly Patricia, maybe Kent and Soneya. I’m very involved in Patricia’s and Kent’s races. Helping Holly and Soneya some.”

“Kent” is Kenton Gartrell, who made it to the general election in District 1, where he lost by 26 votes to Eliana Macias. “Soneya” is Soneya Lund, who won the District 5 council seat over Liz Hallock. And “Patricia” is Patricia Byers, who defeated Thomas Sund in District 3.

They’re all new to the council. Holly Cousens won reelection in District 7, while Jason White (District 2) and Brad Hill (District 6) serve terms that run through 2021.

After serving three terms on the council, Coffey did not seek reelection in 2019. She announced her decision in early February.

On Aug. 3, Smith invited Coffey to an election-night event for Cousens, Byers, Lund and Gartrell, which Coffey declined to attend.

Cousens and Byers voted Tuesday in favor of having city staff work with strong mayor proponents to draft a strong mayor resolution and ballot language that could be finalized by March. Lund voted against the proposal, which failed 4-3. She was joined by Macias, Funk and Hill.

Byers, chosen by the council as mayor in January, said she would not comment on the texts between Coffey and Smith but added that many individuals, publications and groups had endorsed her candidacy.

“That open support is given when the persons or groups see the character and qualifications of a candidate and when they share like ideas in policies and goals,” Byers said.

Cousens said she has known Smith since her first campaign in 2014, when they met and discovered they had similar visions for Yakima. Smith was not overly involved in her most recent campaign but did give her advice “from time to time,” Cousens said.

“I have had a few face-to-face conversations with Mr. Smith, and of course he shared his vision of Yakima and that included the elected mayor conversation,” Cousens said. “I stated in 2015 I was in support of an elected mayor and again during my most recent campaign.”

Lund did not comment on Smith’s involvement in her campaign, but said she voted against Tuesday’s strong mayor motion because she believes taxpayers don’t want to spend their money fighting an avoidable lawsuit.

Three groups filed lawsuits against Yakima in December, after the council had put the measure on the February ballot, and said they would be ready to sue again should the strong mayor proposal resurface.

“I also believe that not only the cost but also the time spent defending a lawsuit, regardless of its merit, will ultimately get in the way of our council making progress on our immediate priorities, such as homelessness, public safety and aging infrastructure,” Lund said.

Smith said he has helped many other candidates with their campaigns over the years. He said he gave Byers and Cousens advice on general campaign strategy and messaging.

“Both told me they supported the strong mayor plan and other philosophies with which I agreed,” he said. “I’m not in the habit of supporting candidates with whom I disagree.”

Smith said he, Coffey, and their respective spouses had been friends for years prior to Coffey’s election to the City Council. The text exchanges show that personal connection, with birthday wishes, family news and requests for couples’ dinners out interspersed between commentary on unfolding local government events.

Coffey reopened the strong mayor discussion by asking Smith when he plans to “do anything this year about strong mayor” in a Sept. 26 text. Over additional messages, Smith shares logistics, such as the council having the right to put the charter changes to a vote and the cost of adding the strong mayor proposal to the ballot.

Smith first spoke publicly to the council about the proposal at an Oct. 15 meeting. The next day, Coffey reached out to Smith and told him that former Councilwoman Maureen Adkison “wants to help us with strong mayor campaign.” She asked Smith to “let us know next move.”

Coffey asked Smith on Nov. 3 when he wanted her to come out in support of the proposal, “beyond voting yes.” Smith told her to do so after the vote and added, “Really hoping you’ll be one of the leaders.”

Coffey responded: “I’m definitely ready to be a leader on this.” She added, “Let me know when and how we can help.”

Smith then asked Coffey to have Adkison “round up” some people to speak at the Nov. 5 council meeting. Coffey said she would check in with her, then messaged Smith, “She’ll be there and will speak. May need some help with comments but she’ll let us know if she does.”

On Nov. 5, the day of a council meeting, Coffey told Smith that Adkison wasn’t answering messages but that Coffey would keep trying. Smith suggested they have an alternative in mind; he said that Leita would speak on the issue “if he has to.” At 3:39 p.m., less than two hours before the meeting started, Coffey messaged, “Just spoke to Maureen. She’ll read the statement. She’s going to look for (Leita) to get it from him.”

Smith’s response came a minute later: “What’s her email? I’ll send one to her right now.”

Coffey closed the conversation around 10 p.m., after the meeting had ended. “That mtg was exhausting, mean and ugly,” she wrote. “Not my best performance and certainly showed why we need strong mayor.”

But Coffey’s last message related to the strong mayor proposal obtained in the public records request shows she was well aware of opposition to the proposal.

“Getting calls and emails trying to dissuade me from supporting strong mayor,” she wrote on

Smith and Coffey exchanged comments about correspondence between the council and the ACLU, which warned that the strong mayor proposal would likely dilute the votes of the Latino population, violate the Voting Rights Act and result in litigation.

Oct. 22, saying, “ACLU just sent letter to city of Yakima. Dulce shouting about it and printing it now.”

Smith told Coffey he had spoken to four lawyers and that the Voting Rights Act did not cover citywide positions. “No one sees a way ACLU wins,” he wrote.

About an hour later, Smith asked Coffey for a copy of the ACLU letter. She wrote, “Wait I have to dig out of garbage.”

Smith said he got a copy on the Herald-Republic website, then messaged Coffey that there is “nothing there,” and Coffey responds, “Doesn’t matter, not changing my mind or Brad’s.”

On Nov. 1, Smith reached out to ask Coffey whether the council would be reviewing the legal report in executive session. Coffey did not respond.

State law prohibits elected officials from sharing confidential information shared in executive session with others, violations of which could result either in a fine or removal from office. Smith, in response to questions about why he asked Coffey to violate state law, said that as a private citizen he is allowed to ask any elected official anything he wants and that Coffey did what was “presumably the right thing” by not answering.

In a follow-up interview, Coffey said, “I don’t discuss executive session discussions, so I wasn’t going to.”

What else they said about the text messages

Coffey said she became involved in Smith’s efforts because she was in favor of the proposal from the start.

“I was in favor of the motion and the movement and I wanted to be of assistance,” she said. “I obviously believed the system needed to change.”

Asked for clarification on her statement about the ACLU letter being in the garbage. Coffey said, “I think it’s fairly straightforward. I had gotten a copy, read it and thrown it away.”

Smith said he didn’t see anything wrong with lining up people to write letters to the editor, attend public events, wave signs or host fundraisers on behalf of a political cause.

He spoke to the friendship he has had with Coffey that predated her role as an elected official but also pointed to their disagreements on issues over the years. One example of that was on the Central Plaza project, where Coffey was for the plaza while he led the opposition.

“Mrs. Coffey and I are proof that you can disagree in politics without being disagreeable,” he said. “Kathy and I have been on the opposite sides of several major policy issues, including the first strong-mayor vote and the downtown plaza project.

“It’s wrong to suggest I have undue influence on her,” he added. “She is a smart woman who charts her own course.”

Oct. 22: The ACLU-Washington sends a letter of warning to the City Council regarding the strong mayor shift.

Oct. 24: Yakima’s legal department submits its version of the proposed charter changes to the council for consideration.

Nov. 4: OneAmerica and 19 other organizations send a letter to the council, voicing their support of the ACLU’s concerns.

Nov. 5: Columbia Legal Services and the UCLA Voting Rights Project send the council letters about their concerns regarding the strong mayor proposal.

Nov. 19: The City Council agrees 4-3 to put the private citizens’ version of the strong mayor proposal to voters on the February special election ballot.

Dec. 10: The ACLU-Washington, UCLA Voting Rights Project and Columbia Legal services file two lawsuits against Yakima contesting the ballot language and timing of adding the measure to the ballot.

Dec. 10: The City Council unanimously agrees to pull the strong mayor measure from the February ballot.

Feb. 4: The City Council votes 4-3 against having city staff work with proponents on crafting a strong mayor resolution and ballot language for the November general election and tells proponents they will have to collect signatures through the initiative process.