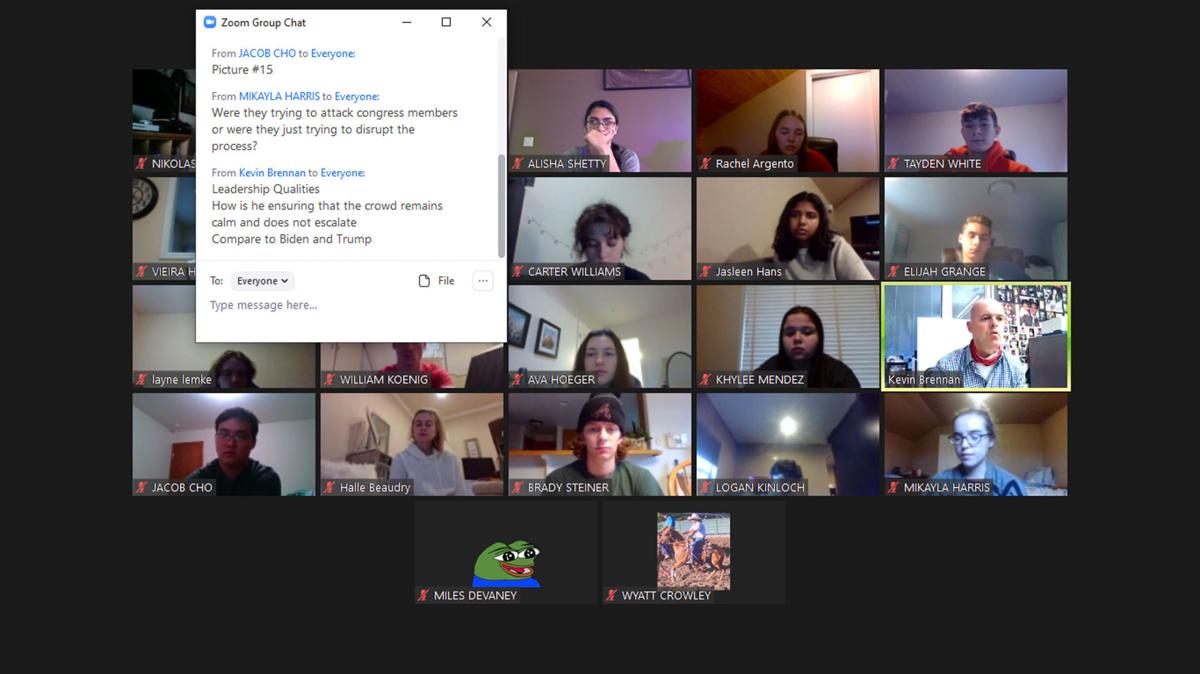 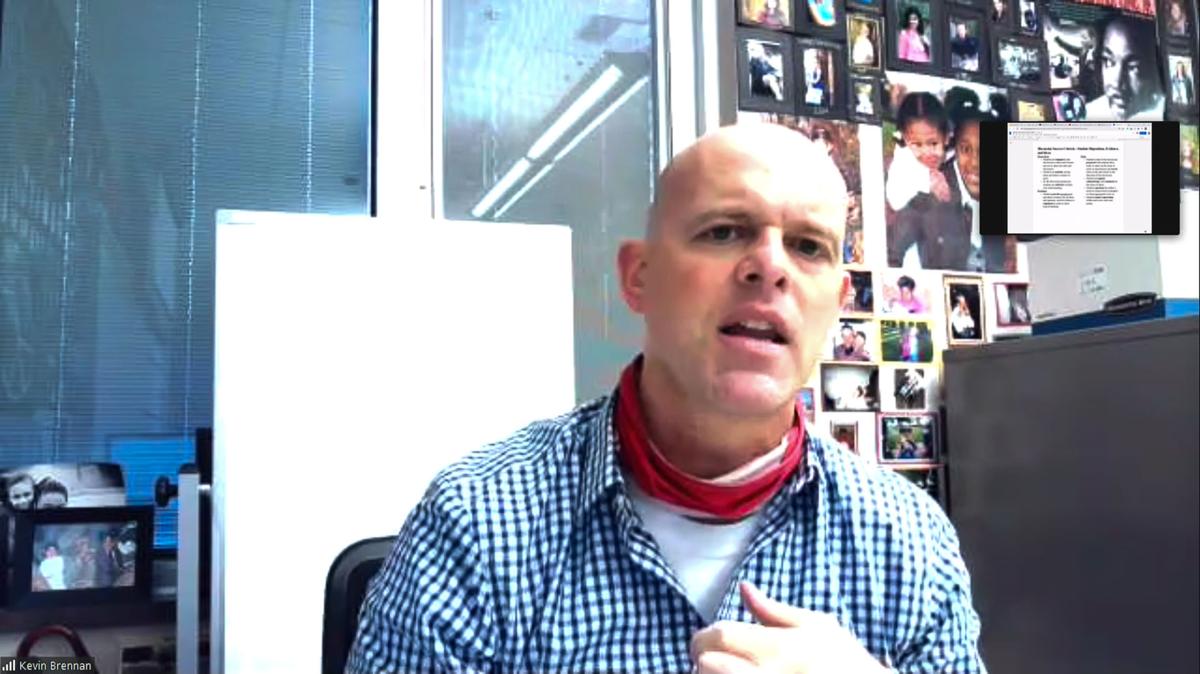 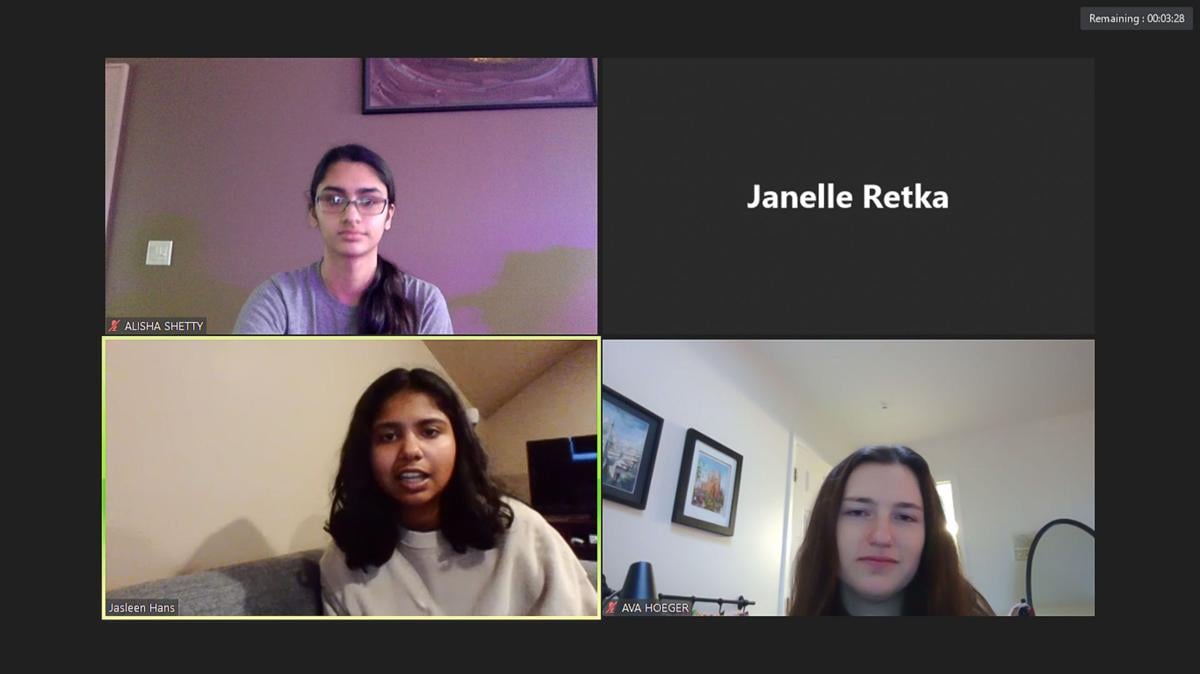 Students in a West Valley High School civics course break into small groups during a class video conference on Jan. 8, 2021, to discuss last week's riot at the Capitol. 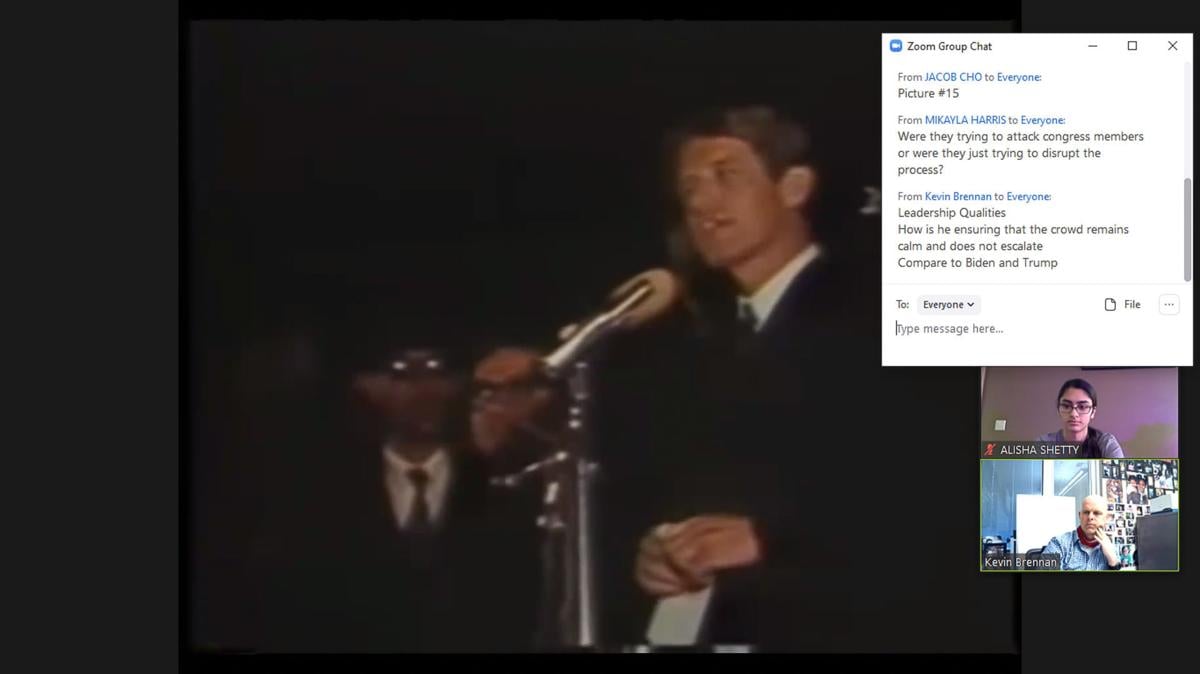 West Valley High School civics teacher Kevin Brennan shares a video of a speech by Robert F. Kennedy in the wake of Martin Luther King Jr.’s assassination and asks students to compare and contrast his dialogue with that of President-elect Joe Biden and President Donald Trump as the insurrection in Washington D.C. occurred on Jan. 6, 2021, during a class video conference on Friday, Jan. 8, 2021. 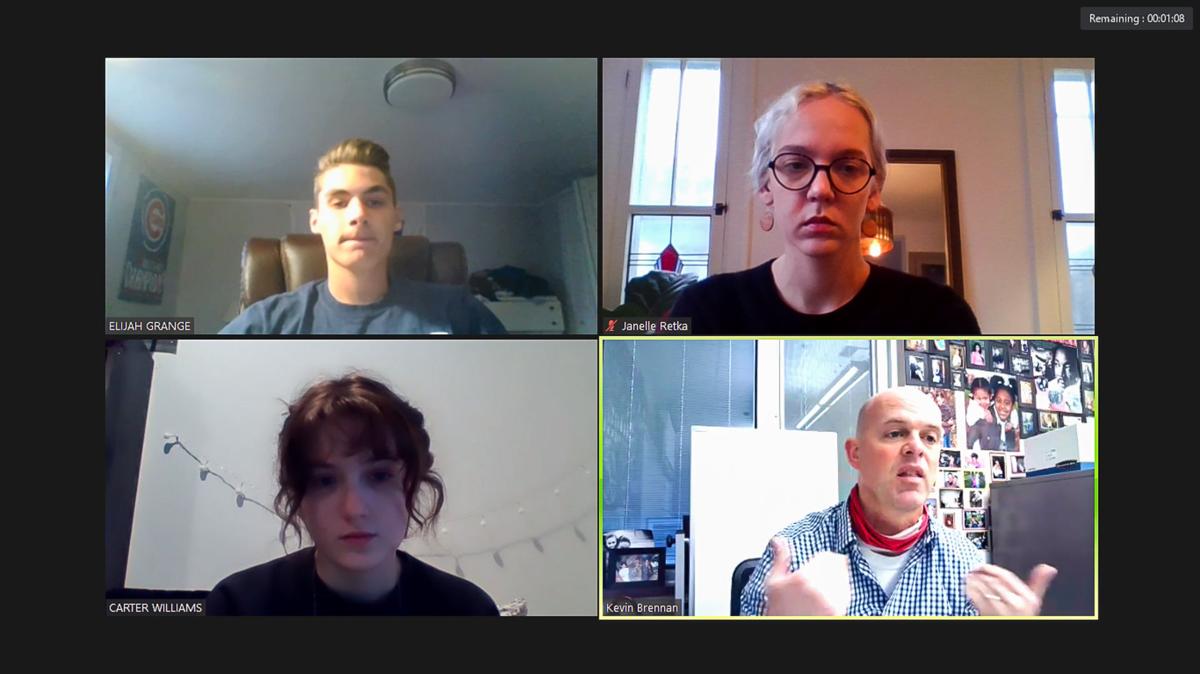 Students in a West Valley High School civics course break into small groups during a class video conference on Jan. 8, 2021, to discuss the insurrection in Washington D.C. on Friday, Jan. 6, 2021.

Students in a West Valley High School civics course break into small groups during a class video conference on Jan. 8, 2021, to discuss last week's riot at the Capitol.

West Valley High School civics teacher Kevin Brennan shares a video of a speech by Robert F. Kennedy in the wake of Martin Luther King Jr.’s assassination and asks students to compare and contrast his dialogue with that of President-elect Joe Biden and President Donald Trump as the insurrection in Washington D.C. occurred on Jan. 6, 2021, during a class video conference on Friday, Jan. 8, 2021.

Students in a West Valley High School civics course break into small groups during a class video conference on Jan. 8, 2021, to discuss the insurrection in Washington D.C. on Friday, Jan. 6, 2021.

Duff DeWitt was preparing to teach a virtual ninth-grade honors English course when a significant moment in U.S. history began unfolding. He put his lesson plan on the back burner and instead pulled up CNN Live on his computer, sharing his screen so students could watch the news: It was Jan. 6, and an insurrection was happening at the U.S. Capitol.

“That’s a teachable moment,” the teacher from Yakima’s Eisenhower High School said. “I prefaced that by saying, ‘There are certain days in your life where you watch the news all day because something so extraordinary is happening that it’s almost irresponsible not to, and today is one of those days.’ So I wasn’t going to teach a lesson on writing an introduction to an essay that I could teach the next day when this was happening.”

His was a feeling shared by many teachers across the Yakima Valley, who paused or reworked their curriculum in the last week to address an unprecedented period in the country’s history.

“Whether you’re a kid or an adult, this was a traumatic and shocking event for everybody, regardless of your political views,” said Chad Stover, a civics teacher at Yakima’s Davis High School.

As U.S. lawmakers conducted a process ordinarily considered ceremonial — tallying the electoral votes from the 2020 presidential election before officially announcing President-elect Joe Biden as the winner — supporters of President Trump stormed the Capitol building last Wednesday, making debunked claims of a stolen election and forcing lawmakers into a lockdown. One Capitol police officer and four rioters died. In the days following, lawmakers have weighed a second impeachment of Trump over allegations that he incited the violence.

The events mark an important historical moment in the country and a teaching opportunity, local educators said. They provided an opportunity to learn about the country’s democratic system and civil discourse. Local high school teachers served as moderators, providing facts as students processed the events logically and emotionally.

As students watched footage from the riot, DeWitt encouraged them to ask questions and share observations.

He provided historical context when needed: DeWitt explained how the Electoral College works. He discussed the Bush-Gore presidential election in 2000, which was resolved in the U.S. Supreme Court in December 2000. That was a much closer election, he explained — Bush won by Florida by a 537-vote margin. He also discussed parts of the U.S. Constitution.

In Stover’s civics class at Davis, students are accustomed to having conversations about complex sociopolitical issues. From the start of the school year, he said, he aims to make it a safe place to share thoughts and have respectful disagreements.

“It sets the stage for being able to talk about contentious issues, whether that’s the death penalty, abortion, immigration policy, or if it’s something more current like what happened in the nation’s Capitol on Wednesday,” he said.

Heated debates are normal, he said. But students learn to analyze why they disagree on issues and to practice listening, in part to find common ground or solutions for moving forward.

In tougher conversations like on Wednesday, Stover said he tries to get on students’ level so they can feel free to process and express their feelings. Under normal circumstances, that’s in a literal sense, sitting at the same height in a circle to encourage conversation. Amid the pandemic and online learning, it’s a bit different, but he said the premise of open conversation is the same. After Wednesday’s events, students’ thoughts were raw.

“One student asked me right away, ‘Is this an act of terrorism?’” Stover said. “I had another student tell me that she felt unsure if she was safe, period.”

One student pointed to a difference in how police and the public were responding compared to Black Lives Matter demonstrations in previous months.

“They’re paying attention, putting pieces together, asking the questions much of our society is asking,” Stover said. “They’re trying to make sense of the chaos despite the trauma that’s happening.”

Leaders of the future

In a video lesson on Friday, students in Kevin Brennan’s West Valley High School civics course also discussed and asked questions about the Capitol riot after viewing footage of the takeover and the speeches by members of Congress, President Donald Trump and President-elect Joe Biden that followed.

Were these protesters trying to harm lawmakers, or simply disrupt the process of counting electoral votes from the 2020 presidential election, one student pondered. If the vice president and all U.S. members of Congress were congregating in the same building, why wasn’t there heavier security presence, another inquired. One student expressed dismay at Trump’s short broadcast amid the ongoing riot. In it, he continued to call the election “fraudulent” — in spite of nearly all of the 50-plus lawsuits by him and supporters challenging the election results having been dismissed or dropped — and told those at the Capitol, “Go home. We love you. You are very special.”

As the students calmly discussed the events, Brennan encouraged them to view original footage and speeches. He told them to fact-check themselves and others; to discuss issues calmly; and to maintain their values.

But he said he hoped to make one point clear to his students: insurrection is illegal.

“It’s a tough deal. I think the natural approach for teachers for most of these things is to take a really neutral approach,” said Brennan. “But there are some things that happen in society that we can’t be neutral on … like when our democratic process is being threatened.”

Across the county in Grandview, civics teacher Ryan Harvey also challenged his students to weigh the events. Neutrality is making sure your emotions don’t override your ability to look at an issue logically and in a civil manner, he told his students during a Friday video call, not that you don’t know about and form a position on it. He encouraged students to form their own stance on issues like the riot.

In response, Harvey’s students said they hoped to see peaceful transitions of power in the future. They saw an inability to listen and respond to different opinions peacefully as part of the problem that led to the riot.

While some high school teachers are talking about the Capitol siege head-on with students, others were left to process the events on their own. Mary-Frances Ballew, a senior in Selah School District, said she wasn’t taking a civics course this term, so she didn’t discuss the events in class — something she was disappointed by.

“I think that’s significant enough to even warrant a conversation even in a calculus class,” she said.

The events in D.C. were so monumental, she pointed out, that they drowned out conversations of Democrats winning two seats in Georgia in a historic January runoff election, giving Democrats control of the Senate, in addition to the House and presidency. “That’s rather incredible,” she said.

Ballew said she understands that teachers shouldn’t share their political affiliation with students, “but I do wish they would be telling students the facts, and encouraging engagement in current affairs.”

It’s been a year of big conservations in classrooms. Students have had to learn about and process an impeachment trial in December 2019; a pandemic and school shutdowns; racial injustice; and now an insurrection and second impeachment process.

In Harvey’s Grandview class, the impeachment process may not get as much play time as the riot, he said, since it’s a process they’ve already lived through and covered. In other classes, it will be incorporated into the normal curriculum. DeWitt, for example, plans to have students write essays arguing on both sides of whether Trump should be impeached for a second time over the Capitol riots as they learn about writing argumentative essays.

“Not that we’re becoming desensitized, but it’s become routine to talk about something that’s happening in the world and interrupt curriculum for that and use current events for the topic of what we’re doing,” said DeWitt.

“It’s been super weird to live through,” he said of recent months. “Everything that happens in the news is the biggest thing that’s happened in the decade.”