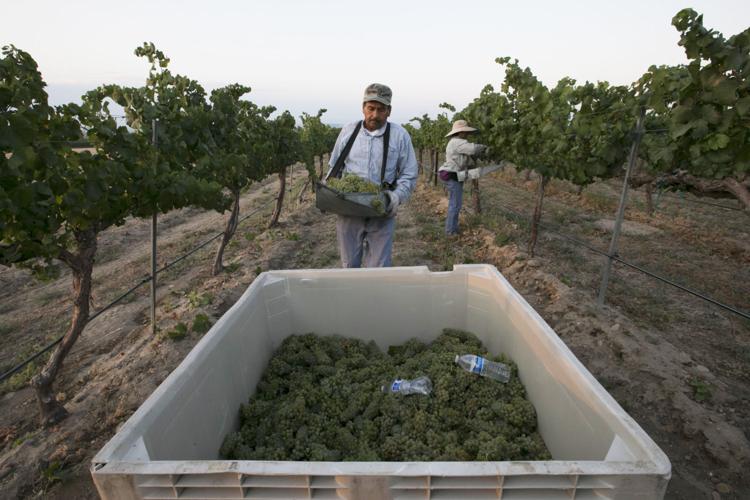 Chardonnay wine grapes are harvest in a vineyard near Outlook, Wash. Aug. 12, 2015. About half the wine grapes grown in Washington are white, but most of the irrigation research has focused on red grapes. But white grapes have different needs and a new study at WSU suggests that an alternating irrigation system could help white grape growers produce high quality fruit and good yield with less water use. (GORDON KING/Yakima Herald-Republic file) 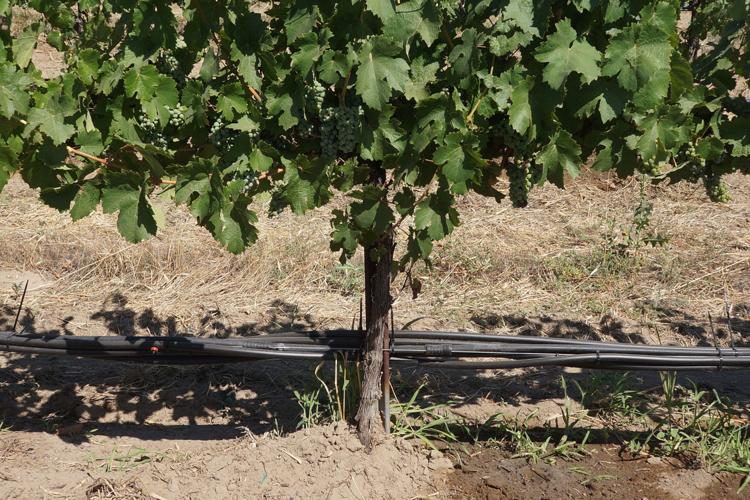 In the experiment, using this system to alternate watering  just one side of the grapevine’s rootzone at a time produced high quality fruit with less water use. (Courtsey photo Yun Zhang)

Chardonnay wine grapes are harvest in a vineyard near Outlook, Wash. Aug. 12, 2015. About half the wine grapes grown in Washington are white, but most of the irrigation research has focused on red grapes. But white grapes have different needs and a new study at WSU suggests that an alternating irrigation system could help white grape growers produce high quality fruit and good yield with less water use. (GORDON KING/Yakima Herald-Republic file)

In the experiment, using this system to alternate watering  just one side of the grapevine’s rootzone at a time produced high quality fruit with less water use. (Courtsey photo Yun Zhang)

Many of the delicious flavors in red wine are created by limiting how much water the grapes get. It turns out that for white wine grapes, severe water restriction can do more harm than good.

That’s why Washington State University scientists are excited about new research that suggests grape growers may want to try a new irrigation option that falls between full watering and the restricted water strategy commonly used on red grapes. The findings could help growers improve white grape quality without wasting water — an attractive combination for vineyards in drought-prone regions such as the Yakima Basin.

Until now, irrigation research has focused on red grapes, said Yun Zhang, a post-doctoral researcher at Washington State University’s Irrigated Agriculture Research and Extension Center in Prosser. “But the kinds of flavors consumers enjoy in white wine and the wine-making process is different, so we thought maybe the irrigation might need to be different as well,” she said.

For red wine, the desired bitter and aromatic compounds in the grape’s skin are magnified if the fruit is more exposed to the sun and kept small — both of which are accomplished by midseason water restrictions known as deficit irrigation, which limits leafy shade and growth.

But with white grapes, too much sun can lead to unwanted bitterness as the plant makes its own sunscreen chemicals, said Jim Harbertson, an associate professor at WSU who studies wine chemistry.

And since fruit skins play less of a role in white wine-making, much smaller fruit just mean a lower yield, not better quality, he added.

In experiments with Chardonnay and Riesling grapes, Zhang and professor Markus Keller found success with a system that confuses vines into thinking they are water-stressed, but without actually cutting water enough to reduce yields.

The system works by using two drip lines that alternate which side of a vine gets watered.

“It’s like having one foot in the water and one in hot, dry sand at the beach,” Keller said. “But if you are always switching it around, you never really feel the heat.”

They will present the initial results of their ongoing research next week at the Washington Association Wine Grape Growers convention in Kennewick.

The technique has been used in Australia for peaches and other fruit, but it never caught on in the U.S. after one test in California on red wine grapes produced lackluster results, Keller said.

“We tended to generalize and use the same strategies for all grapes, but I thought it might be ideal for white wine grapes where you are not looking for smaller berries,” he said.

The experiments were conducted in partnership with the Ste. Michelle Wine Estates in the Tri-Cities.

“From our red grape research, we started growing all of our grapes under deficit irrigation, and that didn’t work (for whites),” Smithyman said. “So we switched our white grapes to full irrigation, which creates very large canopies and very large berries.”

But the very large grapes are not ideal for wine-making either.

“The tricky part is all the yummy flavors are also in the skin,” Harbertson said. “You want to get the good aromatics but limit the bitterness, so you want to go for the middle ground where the vine is not too stressed out.”

That’s why Zhang and Keller’s partial irrigation technique seems to fit in — producing tastier grapes than deficit irrigation does because the canopy grows enough to protect the pale white grapes from sunburn, but using less water than full irrigation.

Fine-tuning the ideal irrigation for white grapes and saving water both have a big appeal in the industry, Smithyman said.

“Not using as much water increases our sustainability. That’s great,” Smithyman said. “It’s really about doing things the most efficient way, getting that canopy control without a huge reduction in yield.”

And saving on water saves money, although growers would have to install a second set of drip lines for the system to work.

Zhang said that because of the recent drought here and in California, there has been a lot of interest in the research. She wants to collect another year’s worth of data before publishing the results.

But it’s promising because the quality and yield results look similarly good for both Riesling and Chardonnay grapes, which are at different ends of the white grape spectrum, Harbertson said.

Keller said he expects lots of interest in the initial findings at the grape growers conference next week.

“It’s still an experimental process for us right now, but it’s something we’re considering expanding,” Smithyman said. “We feel confident that we make one of the best Rieslings in the world, but we are always looking to improve quality.”