You are the owner of this article.
Edit Article Add New Article
You have permission to edit this article.
Edit
Home
News
Sports
SCENE
Photos & Video
Opinion
Obituaries
Unleashed
Classifieds
The Vanished
1 of 12 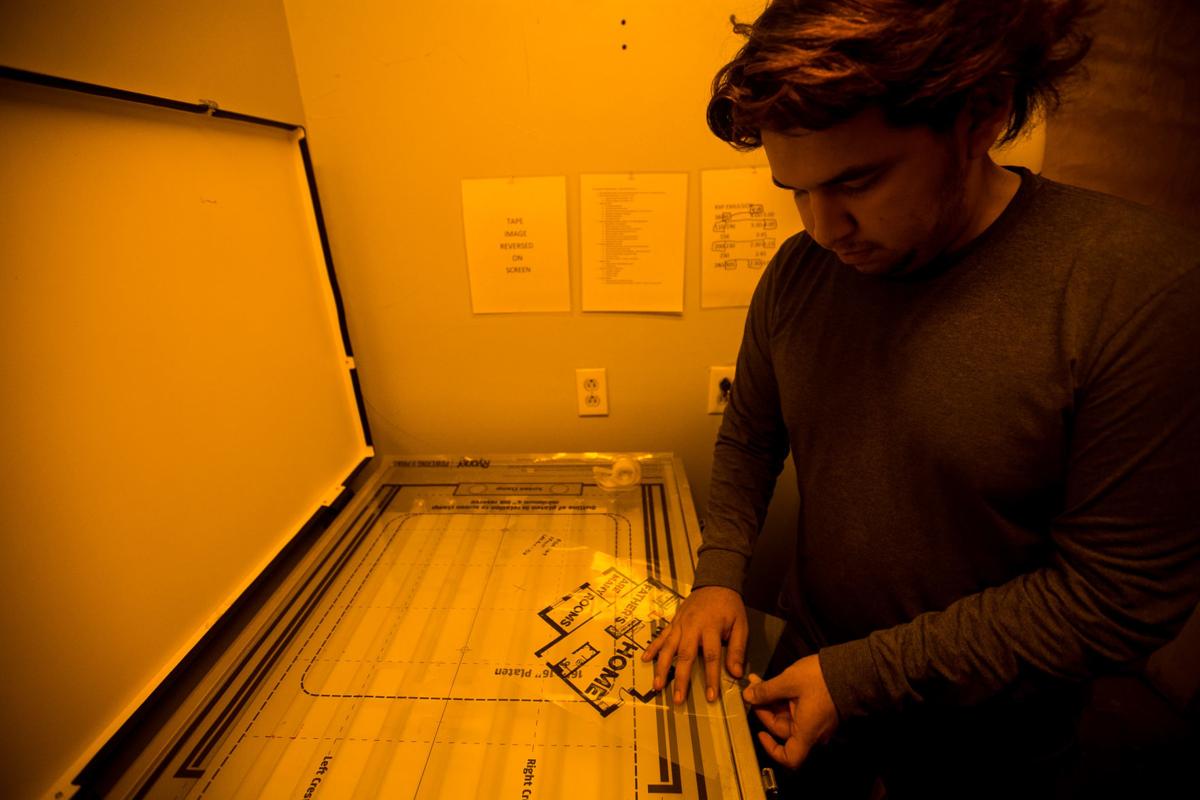 Nelson Frank, known as the darkroom master, prepares to burn a brand logo onto a screen for a new order Thursday, Dec. 12, 2019, at Swan Graphics in White Swan, Wash. 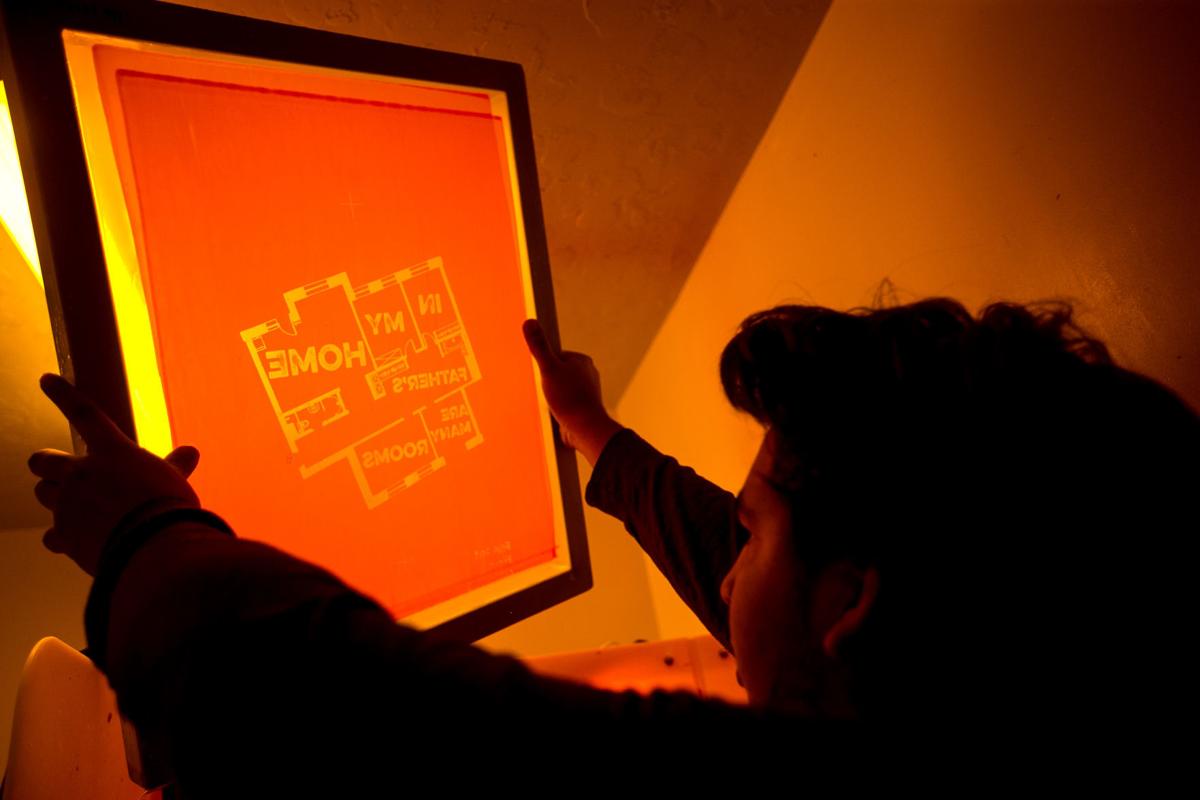 Nelson Frank double checks his work under the light after burning a brand logo onto a screen for a new order Thursday, Dec. 12, 2019, at Swan Graphics in White Swan, Wash. 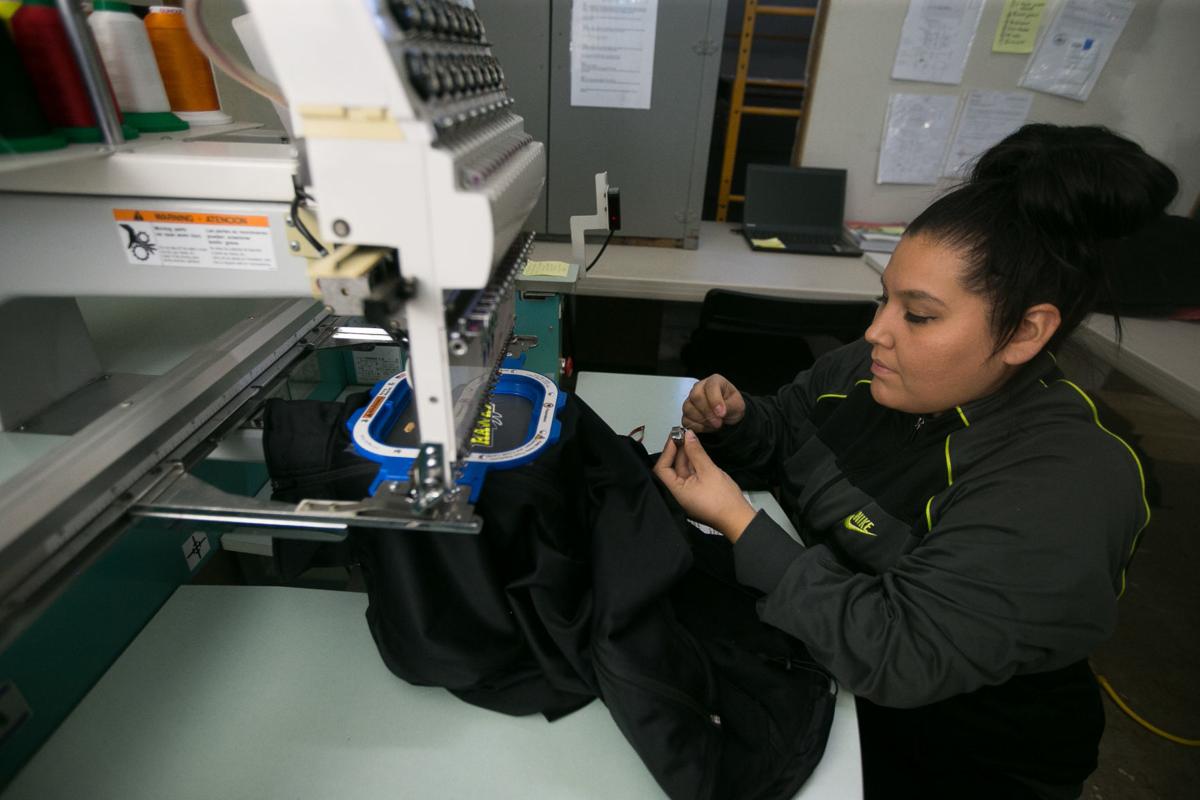 Leslie Swan works on embroidering a logo for a new order Thursday, Dec. 12, 2019, at Swan Graphics in White Swan, Wash. 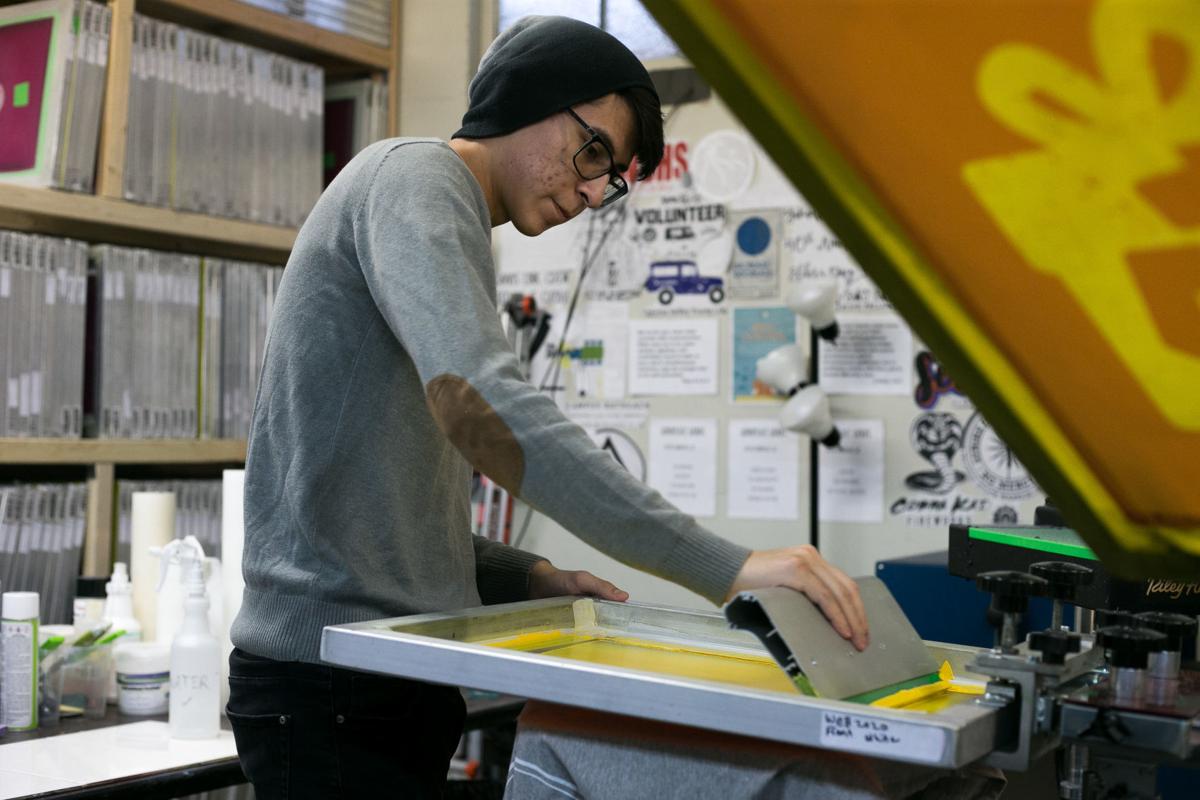 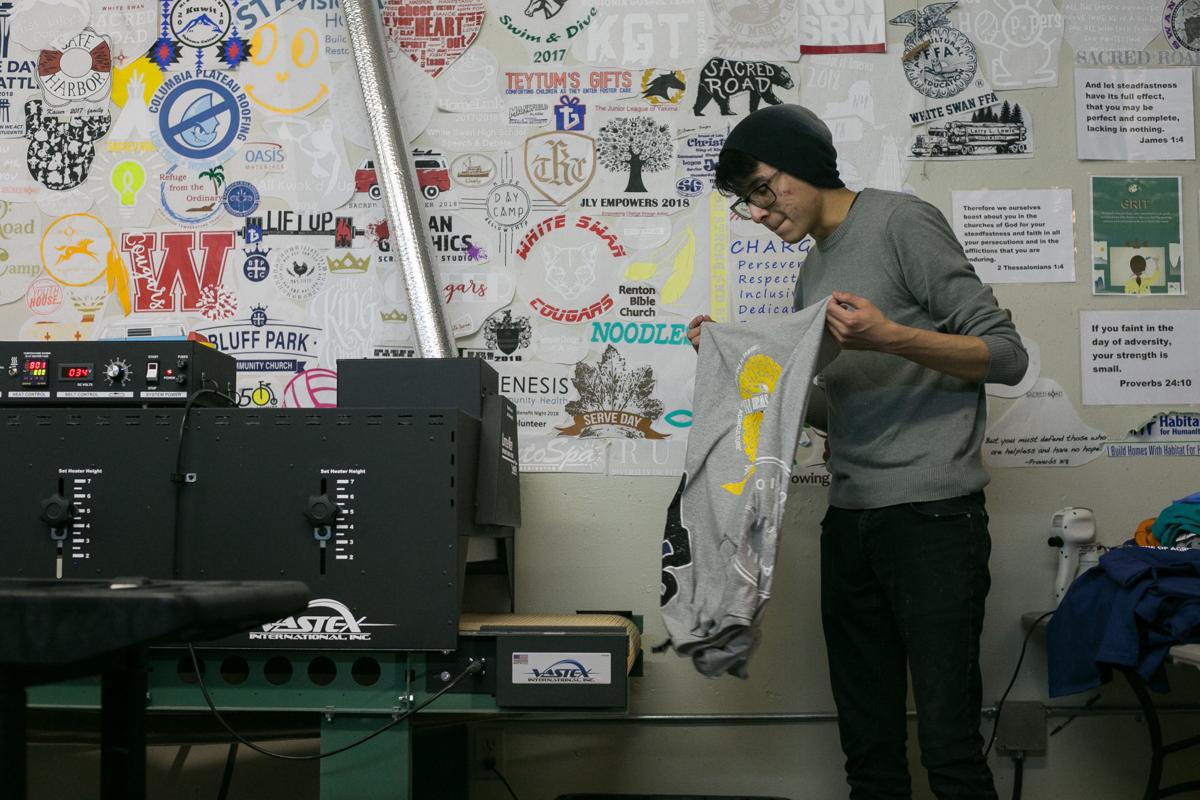 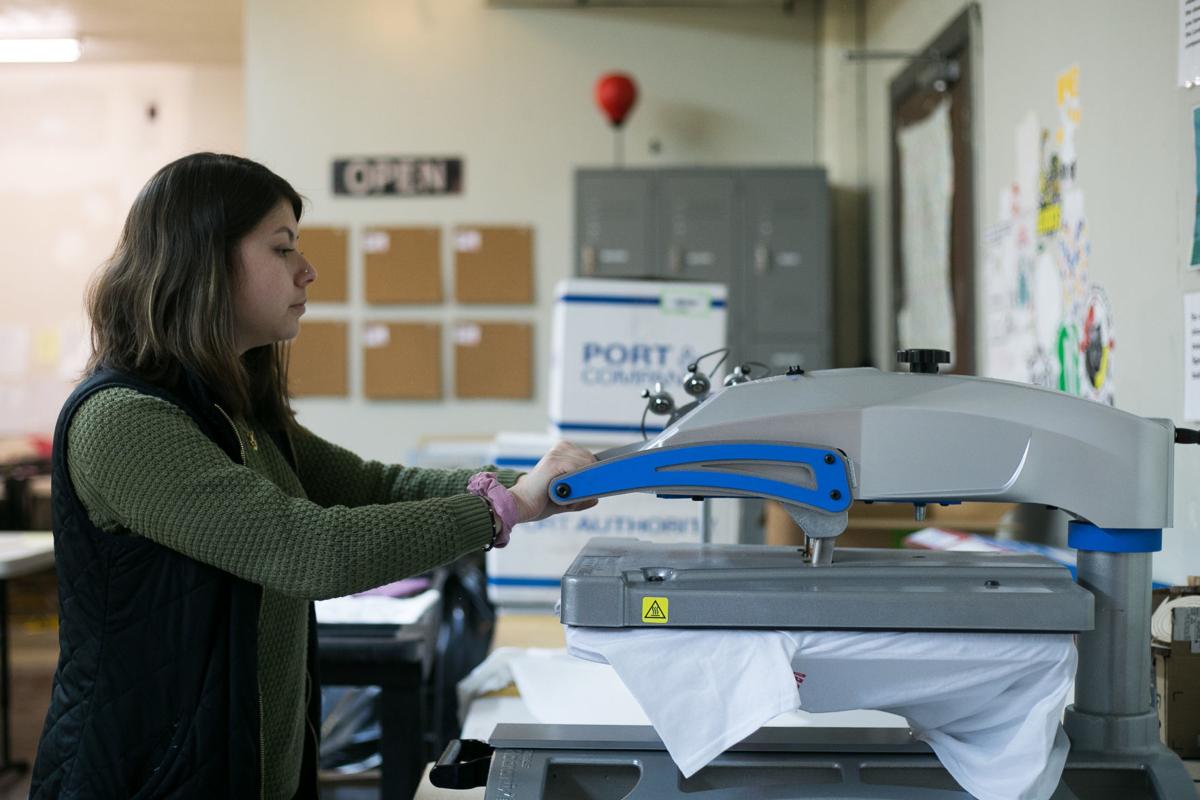 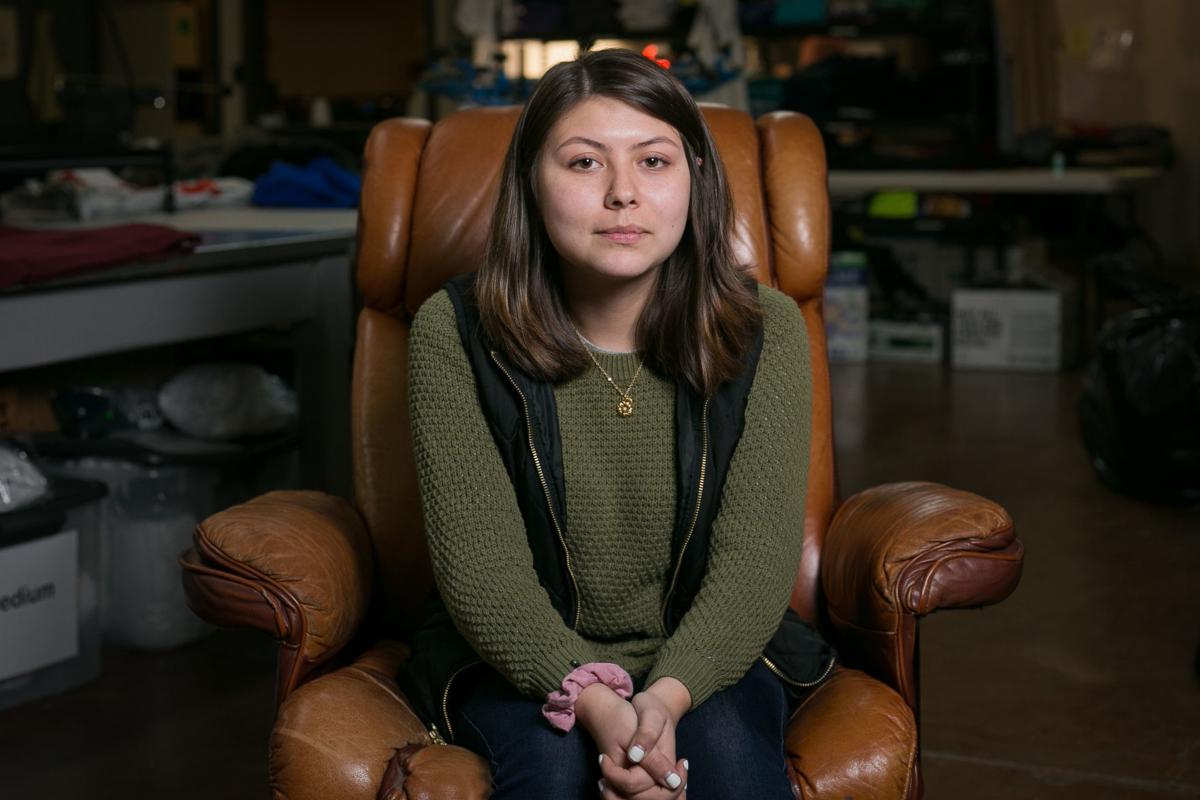 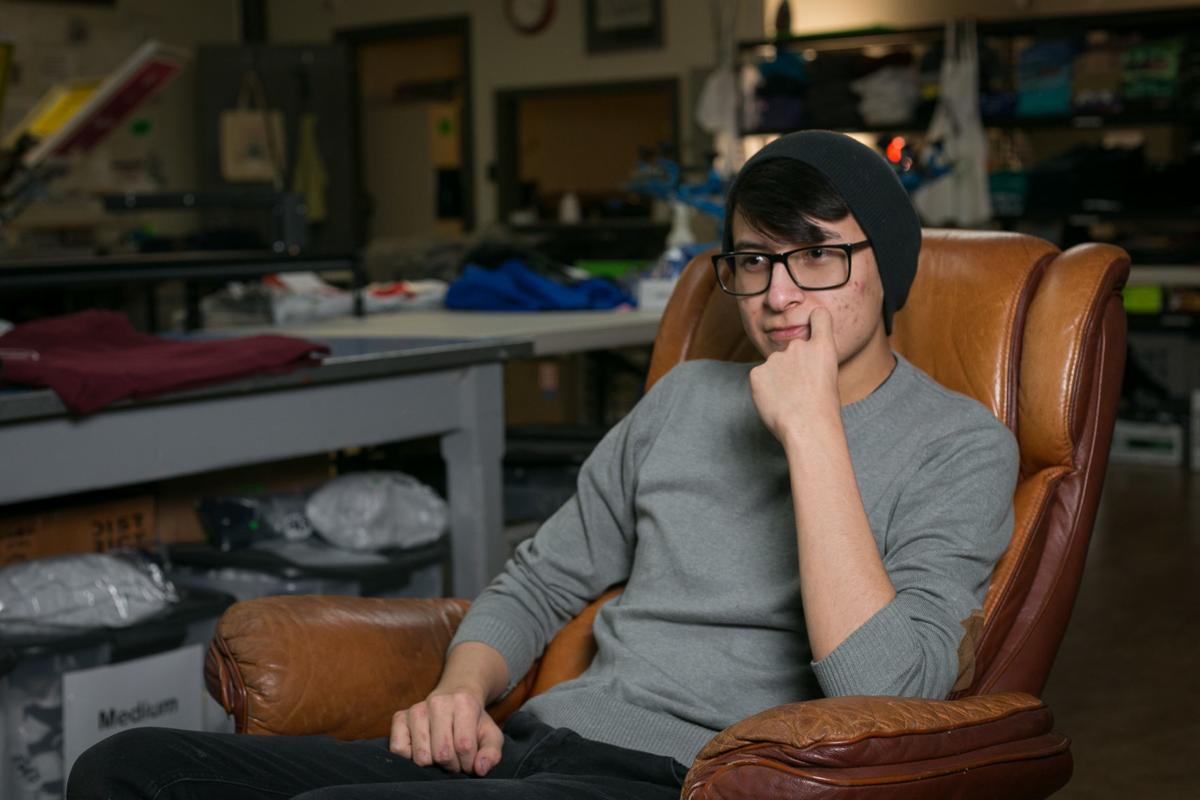 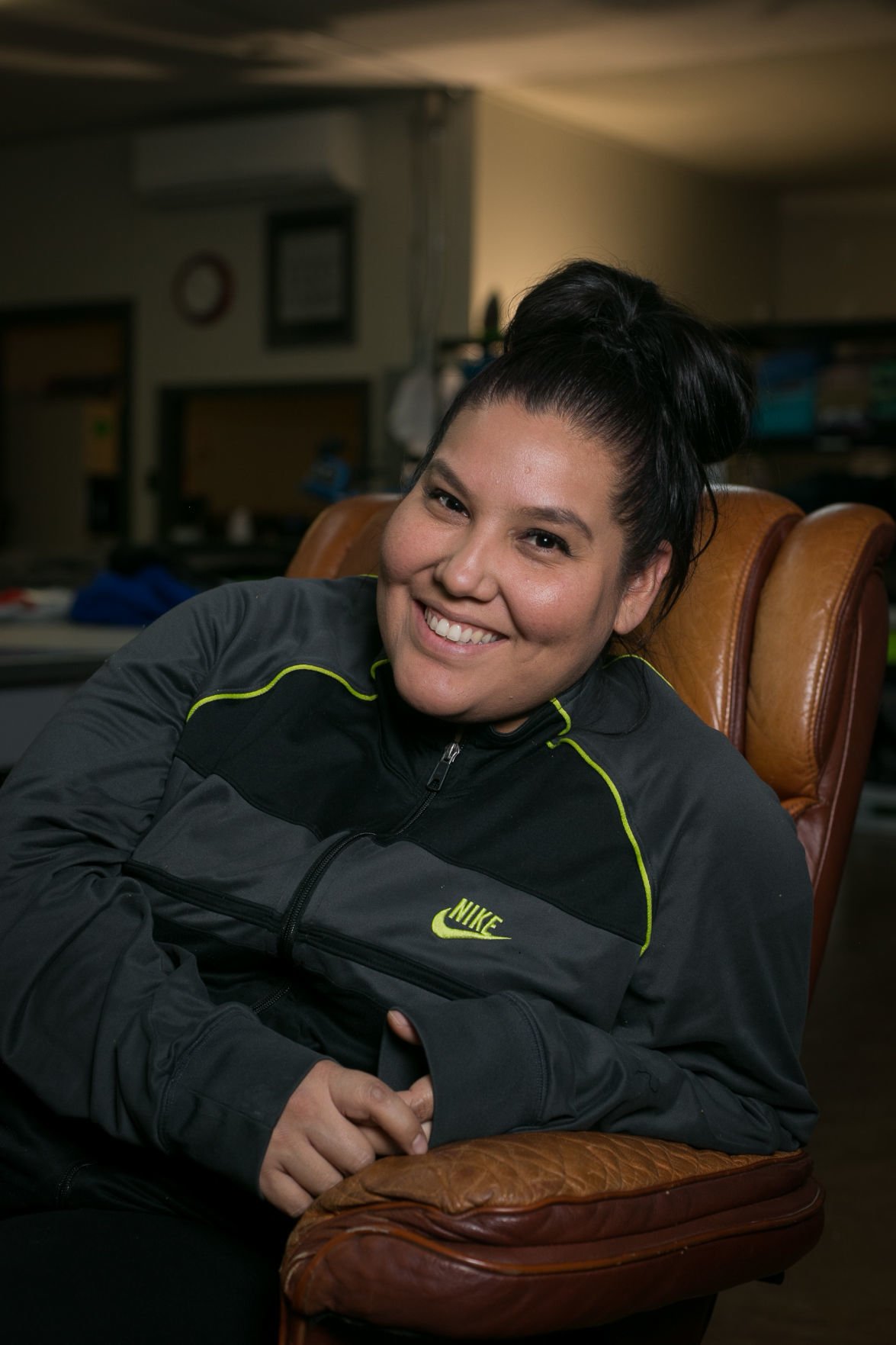 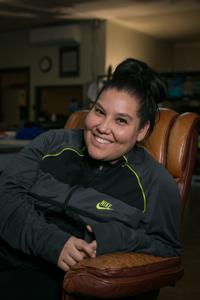 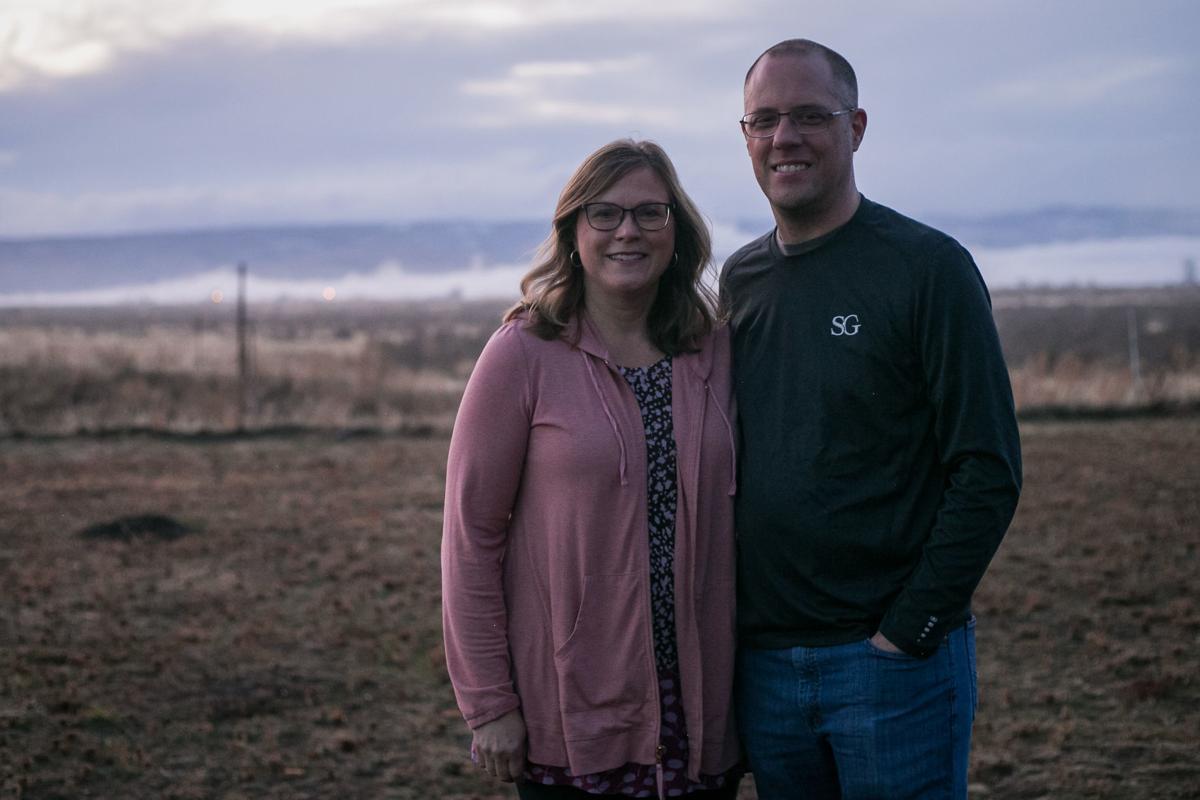 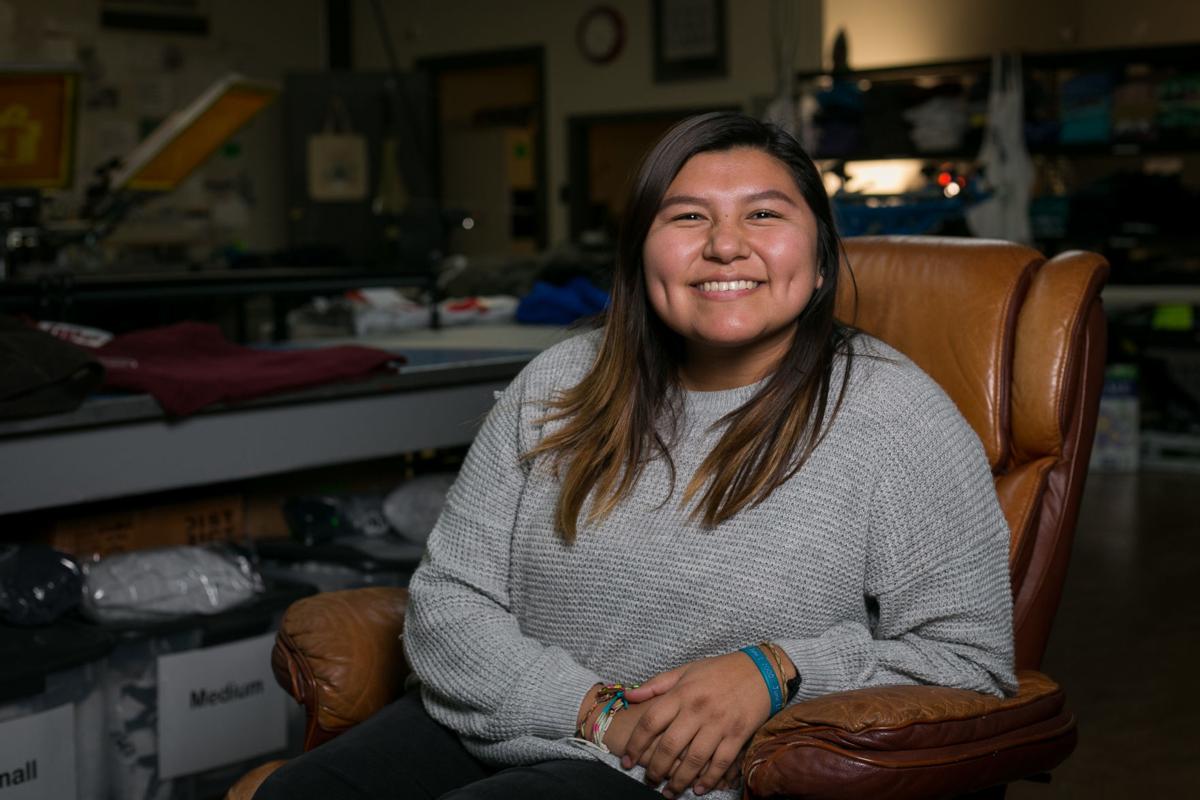 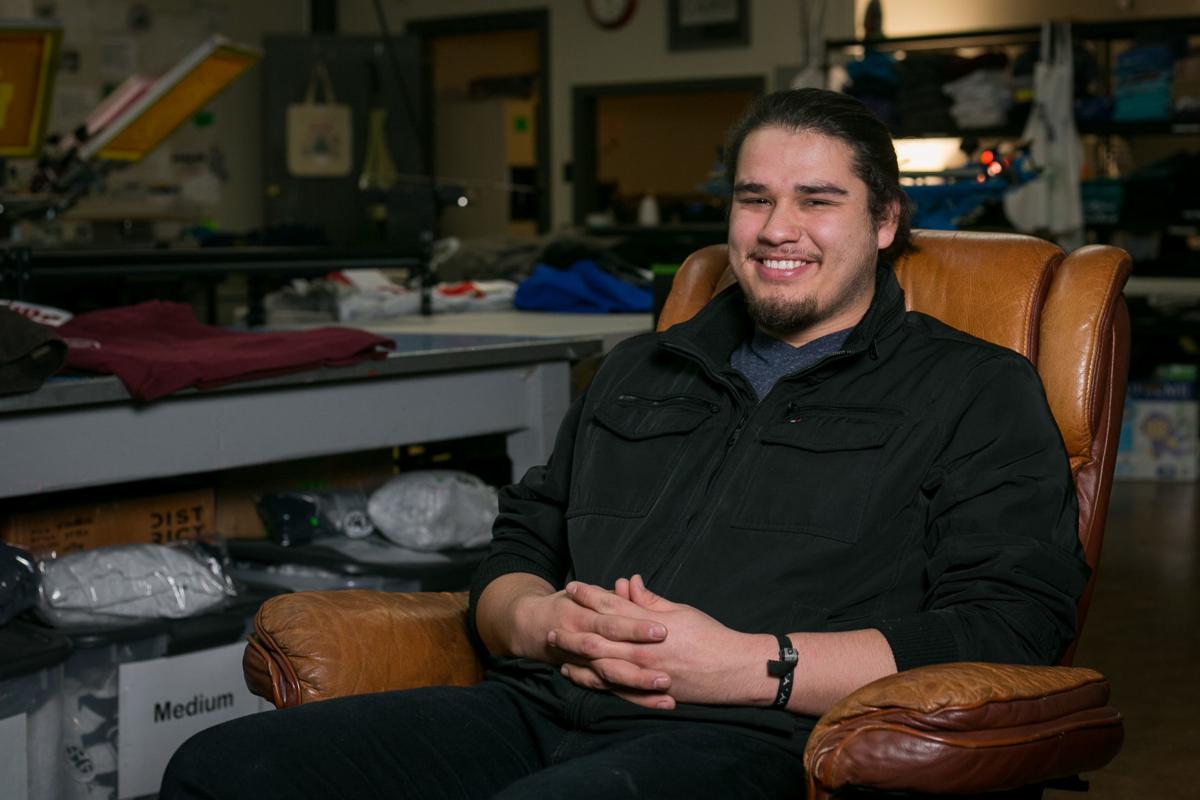 Nelson Frank, known as the darkroom master, prepares to burn a brand logo onto a screen for a new order Thursday, Dec. 12, 2019, at Swan Graphics in White Swan, Wash.

Nelson Frank double checks his work under the light after burning a brand logo onto a screen for a new order Thursday, Dec. 12, 2019, at Swan Graphics in White Swan, Wash.

Leslie Swan works on embroidering a logo for a new order Thursday, Dec. 12, 2019, at Swan Graphics in White Swan, Wash.

In the basement of White Swan’s Christian Log Church, Swan Graphics’ employees are at work filling their latest orders.

As a machine stitches a hockey team’s logo into jackets, another worker carefully aligns T-shirts with silk-screens to create a multi-colored, bowling-themed design. Some of the colors require multiple passes through the press, with a heat treatment between each to keep the ink from smudging.

Swan Graphics’ crew, and owners Darren and Susie Maxfield, don’t see themselves as just making T-shirts, hats and other logo-emblazoned items. Instead, they are giving life skills and economic development to people living in an impoverished corner of the Yakama Nation.

“I think it has prepared me for whatever comes later in my life,” said Joel Nash, one of Swan Graphics’ designers. “I have learned things I should have learned from other people, such as managing money and ‘adulting’ things.”

In addition to their work in the shop, Swan Graphics employees also take classes in life skills such as money management, resume writing and interviewing for jobs, as well as Bible study. Swan Graphics is part of Sacred Road Ministries, a White Swan church that is part of the Presbyterian Church of America.

U.S. Census data shows that nearly 40% of the 793 people who live in White Swan are below the federal poverty level, which the federal government defines as $12,490 in annual income for an individual, or $25,750 for a family of four.

While Maxfield worked in offset printing as a teenager, he really didn’t have experience with graphic design. But he said it was an industry that did not have to be in a major city to succeed.

“The customers don’t have to be local,” Maxfield said, as orders can be shipped anywhere from their shop.

Swan Graphics opened in 2017, operating first in a building near the Log Church before moving into the church’s basement. The only indication that there’s a business there is a wood-carved sign with the company’s name above the basement steps.

He said some of the equipment they purchased was probably more than they needed for a startup graphics business, but the idea was that they would grow into it.

One tenet of the company is that failure is an option, if you learn from it and do better. Around the shop are signs that say, “What have you failed at this week,” an encouragement for workers to try new things and learn from them, the Maxfields said.

“Darren had a list of people, and my name was first,” Logie said, recalling how Maxfield recruited him. At the time, he was unemployed but had been thinking about taking classes to become a welder.

He was trained in the silk-screening process, learning how to put designs on the silk screens and then using them to transfer the graphic images on to T-shirts and other items.

Nash, 19, and Tionna Tillequots, 22, were recruited shortly after Logie through the church to work as graphic designers.

Nash said he was still in high school and was planning to go to college for computer engineering but added that it would have been more stressful at that time. Working at Swan Graphics has served as a “gap year,” helping him prepare for that move.

Likewise, Tillequots said she plans to become a social worker on the Yakama Nation, helping the community, and working at Swan Graphics is preparing her to move in that direction.

Their training in graphic design consisted of watching tutorial videos online and practicing with Adobe’s Photoshop and Illustrator software. Today, they are the lead designers, making color separations for logos to go on clothing items, creating transparencies.

The job of transferring those images to silk screens goes to Nelson Frank, the company’s “darkroom master.”

“It’s better than sitting home and doing nothing all day,” said Frank, who also does maintenance work around the shop.

Frank, who’s been there for nearly a year and a half, said he appreciates the work and the skills he is gaining. For instance, he said he jumps up and does what needs to be done, rather than wait for someone to tell him.

One of his goals is saving up money to buy his own car. He plans to someday train others to work in the darkroom, where images are photographically transferred onto the screens.

And that is one of the things the Maxfields see as significant accomplishments with their employees.

Setting up bank accounts to direct deposit paychecks and getting driver’s licenses, which some people may consider mundane parts of life, are key life skills that lead to financial independence, Susie Maxfield said.

So far, they’ve had four employees pass the written driver’s test and two go on to earn licenses.

They also expect those who are in school to maintain a C average, and to give at least a day’s notice if they must miss work. There’s a financial bonus for not having any unexcused absences, while racking up three can get them fired.

Yesenia Garcia, the youngest worker at 18, handles administrative tasks as well as runs the heat press, bonding vinyl lettering and logos to shirts and other items.

“I feel like (the experience) helps me, even in school. It’s helped me write a resume and cover letter,” Garcia said. It also gives her confidence in interacting with people. She notes she shakes hands and looks people in the eye when she meets them.

At the other end of the spectrum, Leslie Swan is the oldest employee at 32. Already an accomplished seamstress who works with pregnant women and families in the community, Swan said the Maxfields approached her about working with them.

Her sewing knowledge and her work in the community have made the job overseeing embroidery work a perfect fit, she said. Currently, she is learning how to digitize images on her own so the machine can stitch them in full color.

“They have been supportive of me, and allowing me to learn at my own pace,” Swan said.

Susie Maxfield said the culture they have developed has inspired the people they work with. She said that when the company gave everyone four days off for Thanksgiving, they were eager to come back to work.

Logie agreed people are happy to work at Swan Graphics. He recalled coming to work once in a bit of a foul mood, but it didn’t last long when he was with people who were smiling as they worked.

“Fifteen minutes in, we were laughing and giggling,” Logie said.

And the religion classes, the participants said, also help them focus for the day and put some of their challenges in perspective.

Maxfield would like to branch off into computer work and robotics, providing people in the area with additional job skills.