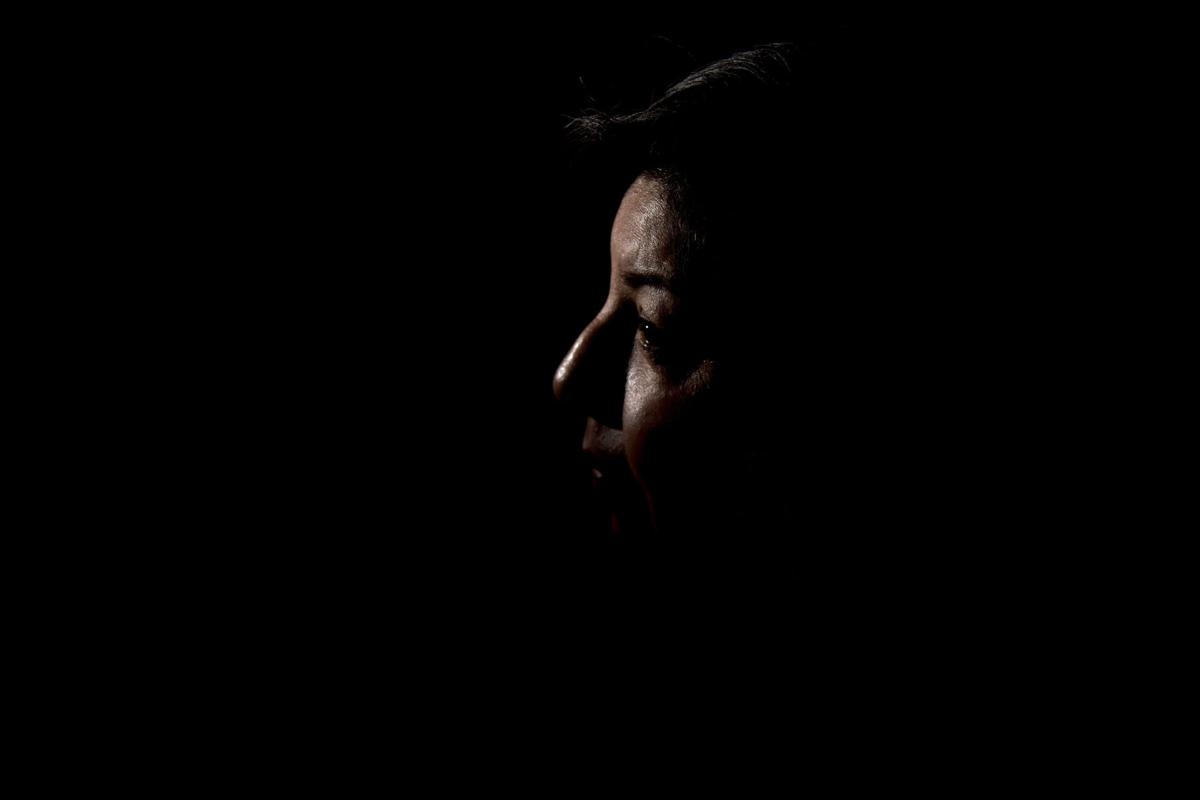 Sexual harassment among farmworkers in the Yakima Valley is prevalent, but there are groups making efforts to educate and help women feel safe while reporting these incidents. (Photo illustration by SHAWN GUST/Yakima Herald-Republic) 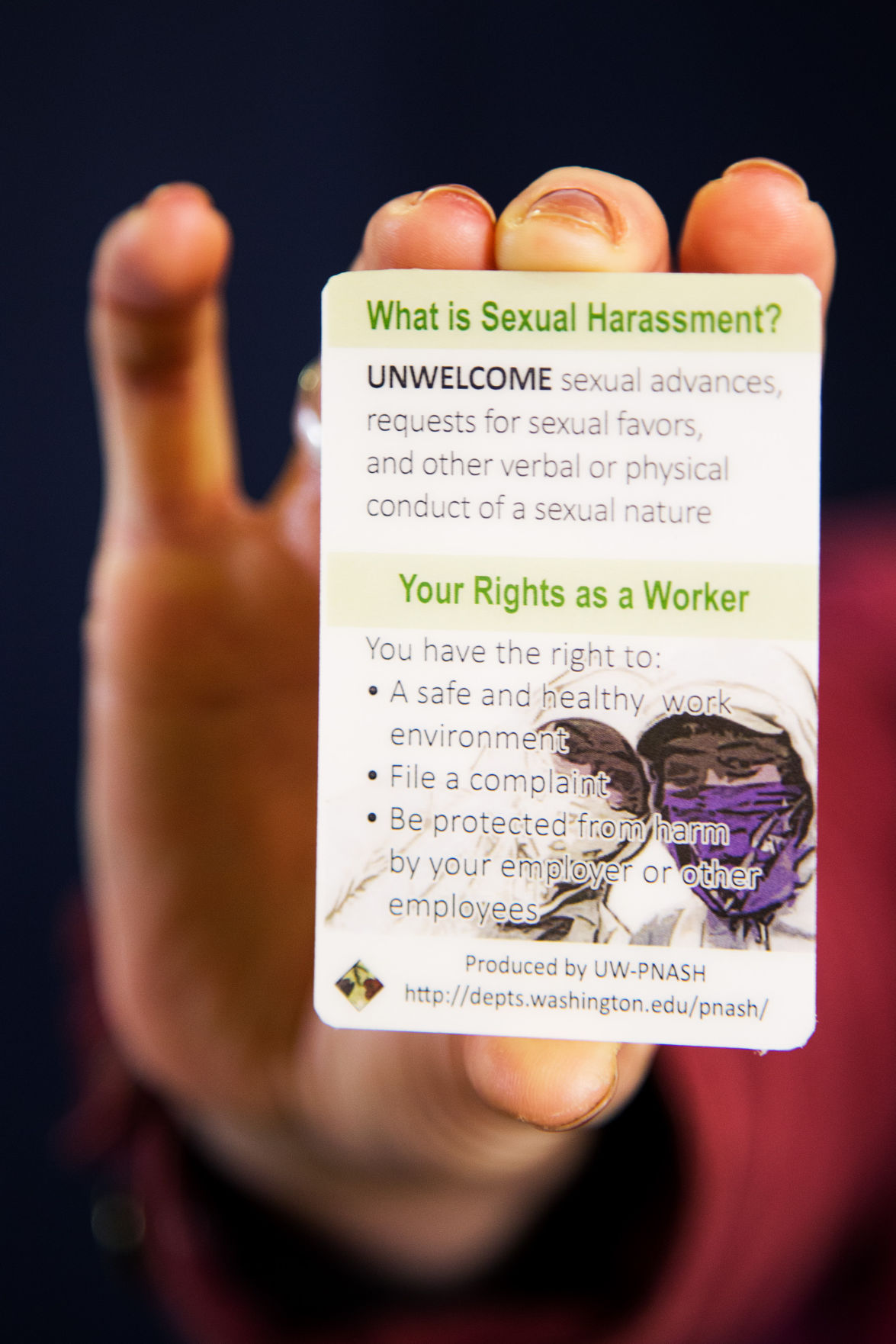 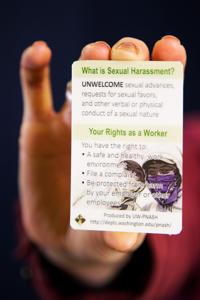 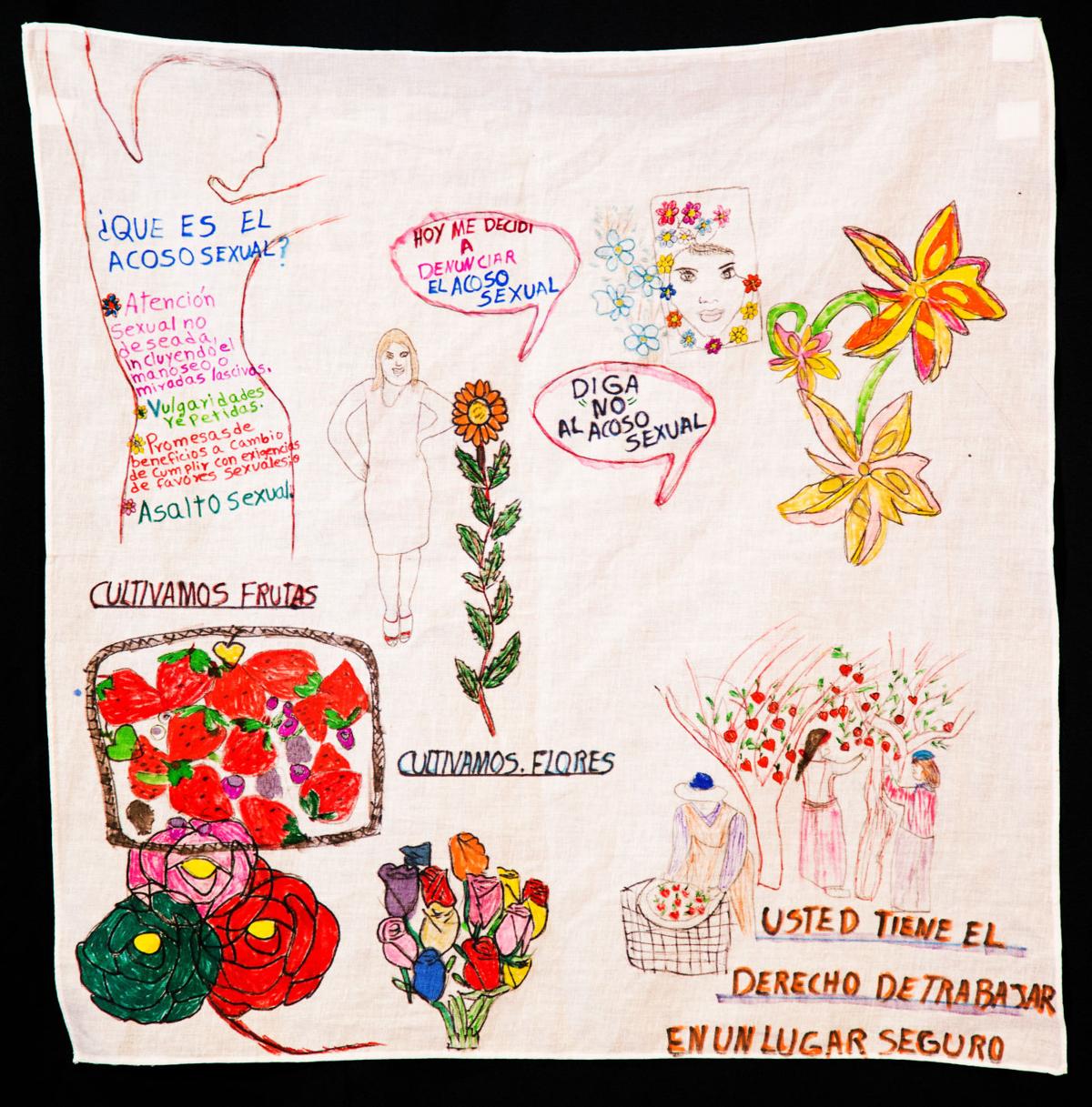 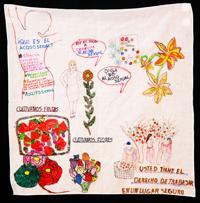 As part of Proyecto Bienestar (Project Well-Being) at Radio KDNA in Granger, program coordinator Elizabeth Torres holds focus groups to talk with women about what constitutes sexual harassment and why they have a right to a safe, harassment-free workplace. They drew on white bandanas to illustrate some of their responses to the lesson. (SHAWN GUST/Yakima Herald-Republic)

Sexual harassment among farmworkers in the Yakima Valley is prevalent, but there are groups making efforts to educate and help women feel safe while reporting these incidents. (Photo illustration by SHAWN GUST/Yakima Herald-Republic)

As part of Proyecto Bienestar (Project Well-Being) at Radio KDNA in Granger, program coordinator Elizabeth Torres holds focus groups to talk with women about what constitutes sexual harassment and why they have a right to a safe, harassment-free workplace. They drew on white bandanas to illustrate some of their responses to the lesson. (SHAWN GUST/Yakima Herald-Republic)

YAKIMA, Wash. -- At the Yakima fruit-packing warehouse where she works, Gabriela is sexually harassed almost daily.

Men look her up and down and lick their lips, or openly speculate about female workers’ genitalia. Men have exposed themselves to her, groped her, and told her it was her fault because of her “good body.”

Even when shaking hands, men stroke women’s palms with their index finger, a not-so-secret gesture to mimic sex, and then laugh at women’s discomfort.

“They look at women as sexual objects, not as women,” said Gabriela. “My work environment is not safe.”

The Yakima Herald-Republic has agreed to withhold Gabriela’s last name to protect her identity. She fears speaking out could mean losing her job.

In the past month, the list of powerful men revealed to serially harass and assault women has grown long, with comedian Louis C.K. the latest to admit to lewd behavior in a statement Friday. Yet in many of those cases, the credibility of accusations depended on women having the wealth and fame to back up their testimony.

On the opposite end of the spectrum are farm workers, who often lack the legal, financial and social power to report abuse or demand consequences for offenders.

And despite widespread efforts in recent years to increase farm worker education and training about sexual harassment and how to report it, offenders still abound.

“There’s still a lot of work to be done to get the agricultural industry even close to some of the other industries,” said attorney Blanca Rodriguez with the Northwest Justice Project, which has litigated several farm worker harassment cases. “That’s because it’s harder for low-wage workers, because of their economic situation, because of linguistic issues, and isolation — it’s just more difficult for them to report and then be taken seriously once they do report, and to prevail.”

Local experts don’t have hard and fast numbers on the ubiquity of sexual harassment in agriculture, in part because of workers’ reluctance to report. But they say many factors combine to make farm workers more vulnerable to harassment than, say, office workers.

Workers may be in fields far from the company’s headquarters, working in relative isolation from other people. And partly due to distance, there may be little oversight over supervisors or “mayordomos,” who function as the face of the company for the pickers or sorters they manage, Rodriguez said. Those supervisors also may receive little training in how to effectively manage employees.

Supervisors’ singular priority to be as productive as possible for the company also leads to cutting corners and workplace violations, said Victoria Breckwich with the University of Washington’s Pacific Northwest Agricultural Safety and Health Center (PNASH).

She estimated 70 to 80 percent of female agricultural workers experience some type of sexual harassment within the industry in their lifetime, along with about 10 percent of male workers.

Rodriguez recounted a local case where a supervisor would urinate in front of male field workers, then tell them to come and blow to dry him off.

“That just would not be tolerated in a lot of other places, but it is in the agricultural industry,” she said.

For farm workers living paycheck to paycheck, especially single mothers, the fear of losing their job if they report means they’re rather just put up with harassment, Rodriguez said.

And even if workers resolve to take a case to court, “It’s going to take years before you see anything of value (from a legal outcome), and how are you going to support yourself during that time?” she said.

It’s even harder for immigrant workers who don’t have legal status and fear being turned in to immigration if they report abuse, she said.

One of the biggest things that happens is affairs, he said, including the idea of having a “Sancho” or “Sancha,” where someone has a wife in Mexico but a second “wife” when working in the U.S. However, when that kind of relationship occurs between supervisors and subordinates, it creates the potential for an abuse of power.

“The people in management need to know that they are not allowed to pursue romantic relationships with subordinates, and to have it in writing, and to have that in the company’s sexual harassment policy and be trained on it,” Gempler said.

Male-on-male sexual harassment also has been on the rise recently, he said, with the Growers League receiving several complaints in the last 18 months.

Gempler believes the vast majority of harassment among farm workers is people making sexually-oriented comments toward others, like rating the bodies of women on the crew, rather than unwanted physical contact.

But the overall impact is to make an unpleasant place to work, he said.

Gempler estimates that there are roughly 25.000-30,000 farm workers in the Yakima Valley. And in the last decade, the Growers League alone has trained around 4,000 of them, he said.

Gempler gives a two-hour “How To Identify and Prevent Sexual Harassment” training to individual growers and packing houses requesting it, as well as for Growers League members and for the Washington Wine Growers Association. It’s primarily aimed at supervisors and management.

He gives many case studies and examples, “making people uncomfortable,” he said.

“Talking about how nobody should have to dread coming to work because they know they’re going to get hassled, by whomever,” he said. “And really talking about the whole idea of respect. We always end it with the acid test: What would your mother think? ... We say, ‘Would you say that or do that in front of your mom? Because if you wouldn’t, it’s probably not something you should say or do.’ ”

The state Department of Agriculture works closely with PNASH, and has recently started encouraging sexual harassment training as part of occupational safety.

The department may not provide the training directly, as it mostly focuses on pesticide safety in the field, but it does advise companies on how to best train their workers, said Ignacio Marquez, regional assistant to the department’s director.

“We started to look beyond tractor safety, ladder safety, pesticide safety — there’s other things we need to train on,” Marquez said. This year, Ag has invited the Washington Human Rights Commission to provide sexual harassment training at an industry conference.

“I think the industry is starting to see that more training, more orientations around how to supervise and manage people needs to be done,” he said.

But challenges remain in the gap between education and action.

“This idea that people ... morally, they might know this is wrong, but they know they can get away with it, and that’s the problem,” Breckwich said.

That’s the barrier blocking many victims of harassment or assault from reporting in the first place: Why report if they know nothing will be fixed?

Several months ago, Gabriela told the police about a supervisor who grabbed her by the leg and wouldn’t let go after she told him not to. They told her that if he does it again, he’ll go to jail.

But she also contacted police during a prior incident when a man exposed his penis to her in the fields, a misdemeanor crime in Washington. That time, they told her there was nothing they could do. She opted to leave that job rather than continue working with him.

“The law doesn’t help,” she said. “It’s the word of the accused against the word of us (victims).”

And though the fruit-packing company she now works for has a human resources department, she said, “They side with the company, not the employees.”

Several organizations are trying to increase awareness among workers of resources for victims of sexual harassment.

Working with Breckwich’s project at UW, she also distributes laminated cards to workers in English and Spanish with information and numbers for victims to call. Together they’ve distributed a few thousand cards, including at the May Day march and at local health fairs.

A majority of the women she’s worked with have either experienced or witnessed sexual harassment, Torres said.

The commission doesn’t ask about immigration status, but the fear of approaching a government entity still keeps many workers away, said policy analyst Laura Lindstrand. Others may worry about a potential language barrier, even though the agency has bilingual investigators. And the commission is small, with a limited budget and fewer than 30 employees, so not many people even know it exists.

And farm workers tend to move from season to season, changing contact information, which means victims and witnesses may not be available to keep pursuing a complaint, Lindstrand said.

If the commission is able to fully investigate a complaint and finds that there was harassment or discrimination, they can impose monetary penalties on the company, which is often the only way to get their attention, she said.

“And then hopefully before that happens, to help them understand what the law is, how to avoid liability, and then the consequences of violating the law,” she said.

Gempler tells companies he trains that they’ll get sued or cited if they don’t protect employees’ rights. That means they need to ensure a zero-tolerance harassment policy from the top down, which requires constant, repetitive training.

He feels bigger companies are doing a better job of this in recent years, setting up hotlines for victims to call and establishing HR units. But the work is ongoing.

“They really need to take a lot of trouble and time to explain to people the complaint procedures; explain to people how they can complain and make a complaint safely, and let them know they’re not going to get in trouble,” Gempler said. “You need to make people feel safe.”

Last week, Miguel Gonzales worked quickly to pluck apples from trees in an orchard north of Tieton before the snow season arrives.