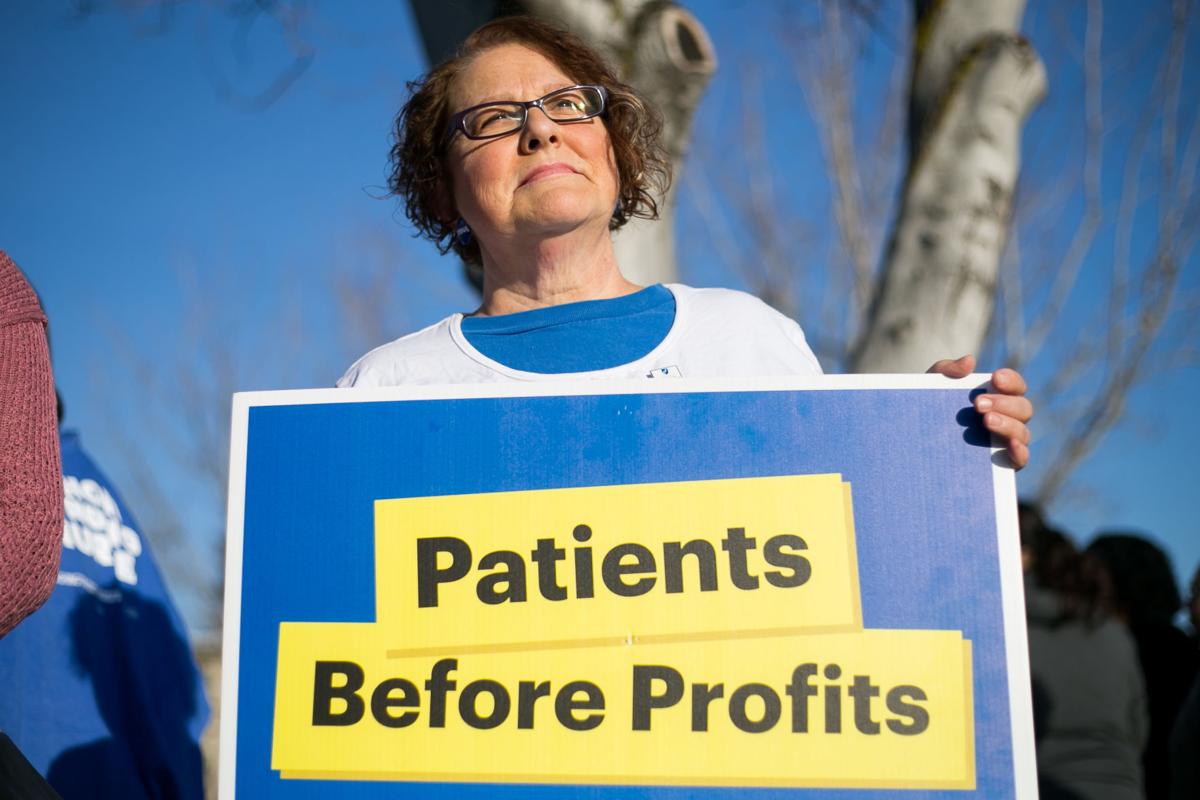 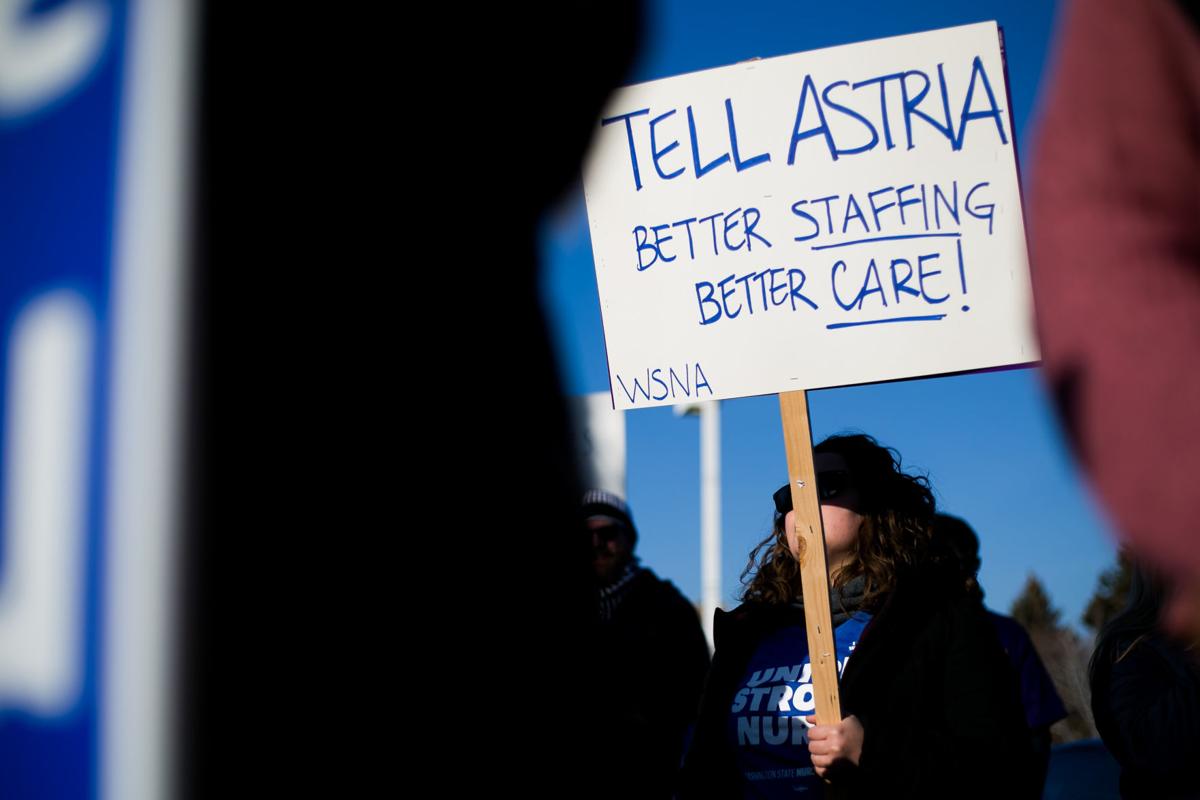 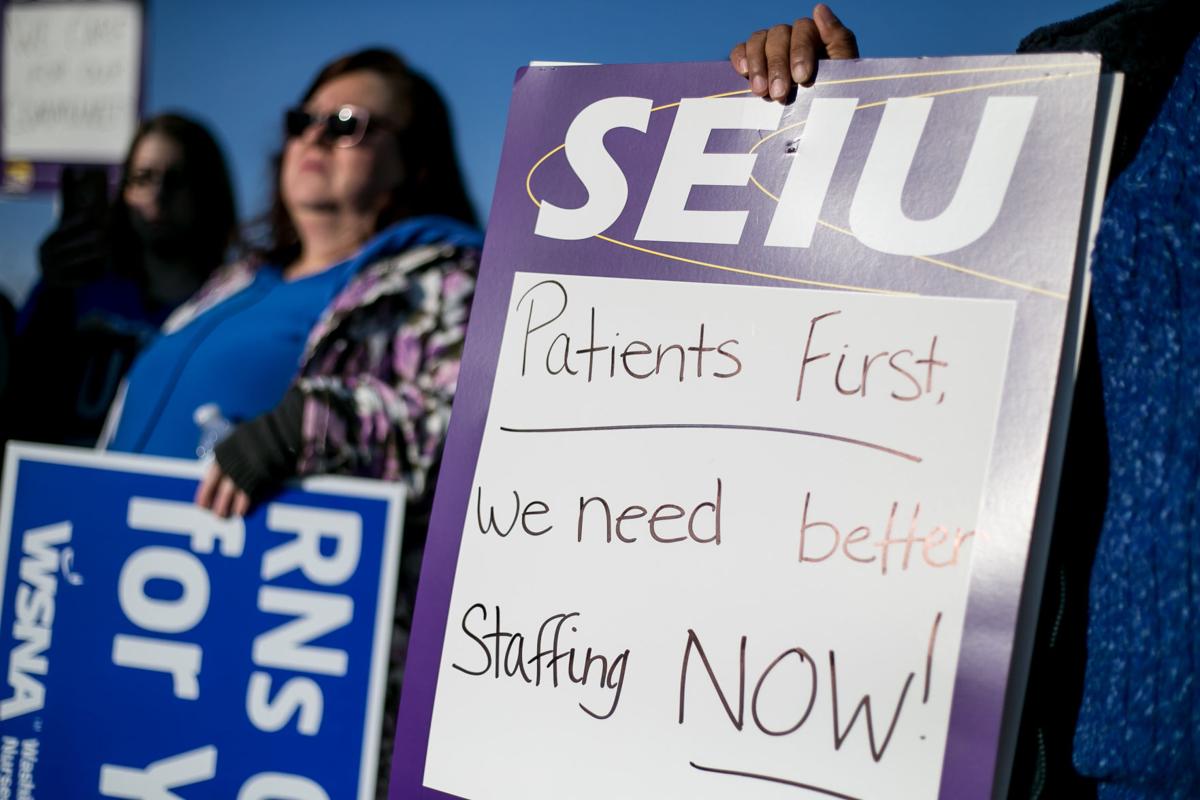 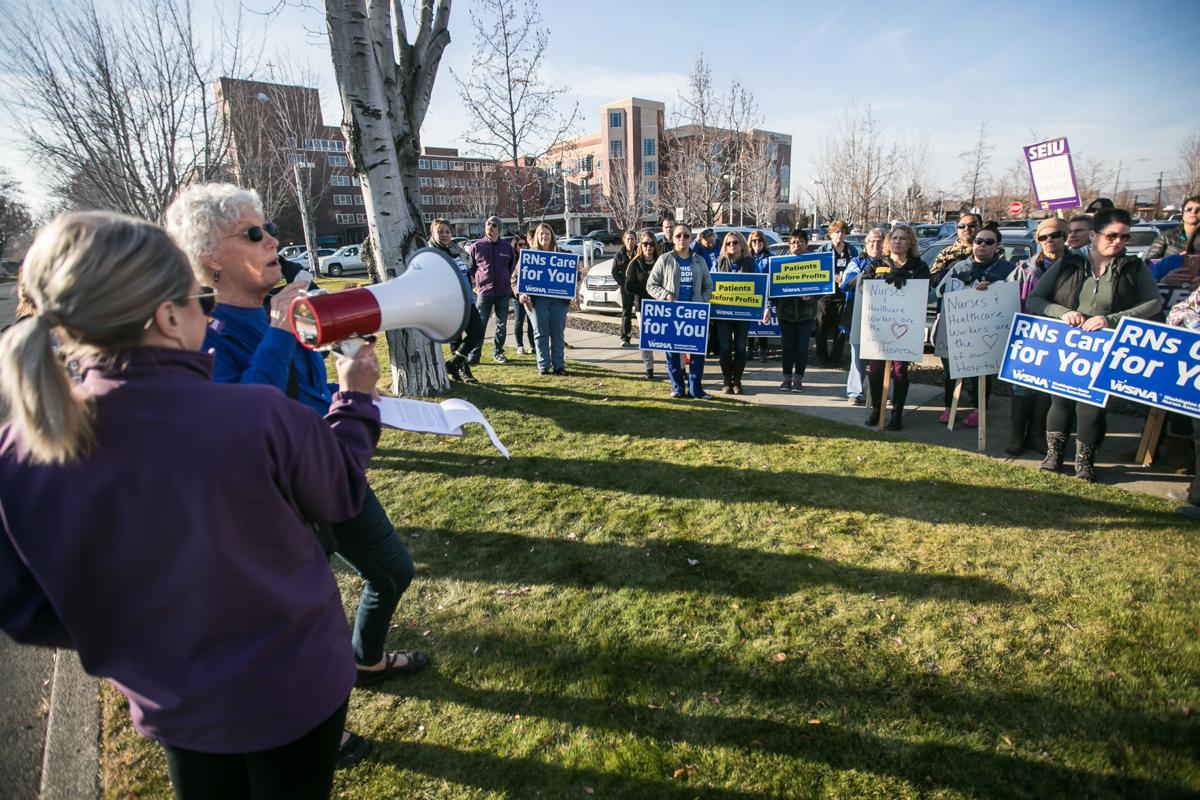 Dr. Kay Funk, MD, Yakima City Council District 4, speaks to health care workers as they picket before and after their shifts to represent WSNA and SEIU Healthcare 1199NW near Astria Regional Medical Center on Walnut St. and Ninth Ave. in Yakima, Wash. on Tuesday, Nov. 20, 2018.

Dr. Kay Funk, MD, Yakima City Council District 4, speaks to health care workers as they picket before and after their shifts to represent WSNA and SEIU Healthcare 1199NW near Astria Regional Medical Center on Walnut St. and Ninth Ave. in Yakima, Wash. on Tuesday, Nov. 20, 2018.

YAKIMA, Wash. -- The chants could be heard blocks away from Astria Regional Medical Center in Yakima.

“Quality care is under attack, what do we do? We stand up and fight back!”

“Hey, hey, what do we say? We want safe staffing right away!”

The chants were part of an informational picket Nov. 20, by employees represented by the Washington State Nurses Association and Service Employees International Union Health Care 1199NW. They are negotiating new contracts for more than 500 employees at Astria Regional Medical Center and Astria Toppenish Hospital.

The company “remains focused on our commitment to investing in the services and quality care needed throughout the Yakima Valley,” she said in a statement.

During negotiations in May, Astria Regional Medical Center informed the WSNA that there were 80 open nursing positions at the hospital.

As of early October, the union represented 198 nurses at Astria Regional and 49 at Astria Toppenish. Dick said he didn’t have exact job opening figures for Toppenish available, but he’s heard there were a significant number of openings there, as well.

The result: Nurses working at the hospitals end up working mandatory overtime.

Dick said the pay for nurses at the two hospitals is more than 15 percent lower than at other hospitals in Eastern Washington, including Astria Sunnyside Hospital.

The unions want a new contract providing better wages as well as requiring the hospital to fill open positions rather than dealing with shortages through traveling nurses.

“They’re spending millions on travelers instead of investing in their community,” he said.

John Procopio has worked as a nurse extender at Astria Regional for 22 years and has served as an SEIU representative. Procopio said he understands that some of the staffing issues developed under Community Health Systems, the hospital’s previous owners, but Astria needs to fix them.

“They talked a good game when they came here,” he said. “We’re holding them accountable. We want to see them follow through. We do not see those efforts on the scale we would like to see.”

Tina Morrison, who has worked as a radiology technician at Astria Regional for more than 11 years and is represented by SEIU, said shortages in other hospital departments mean it takes longer for patients to receive the X-rays and other services she provides.

“We all work together,” she said. “If one place is hurting, we are all affected.”

A cutline enclosed with a photo in this story was edited to correct the identity of a Toppenish nurse who was at an informational picket last week. The nurse was Julia Barcott not Crystal Kosik.

Astria reverses course and will continue to fund residency program

Timeline: Astria Health over the years