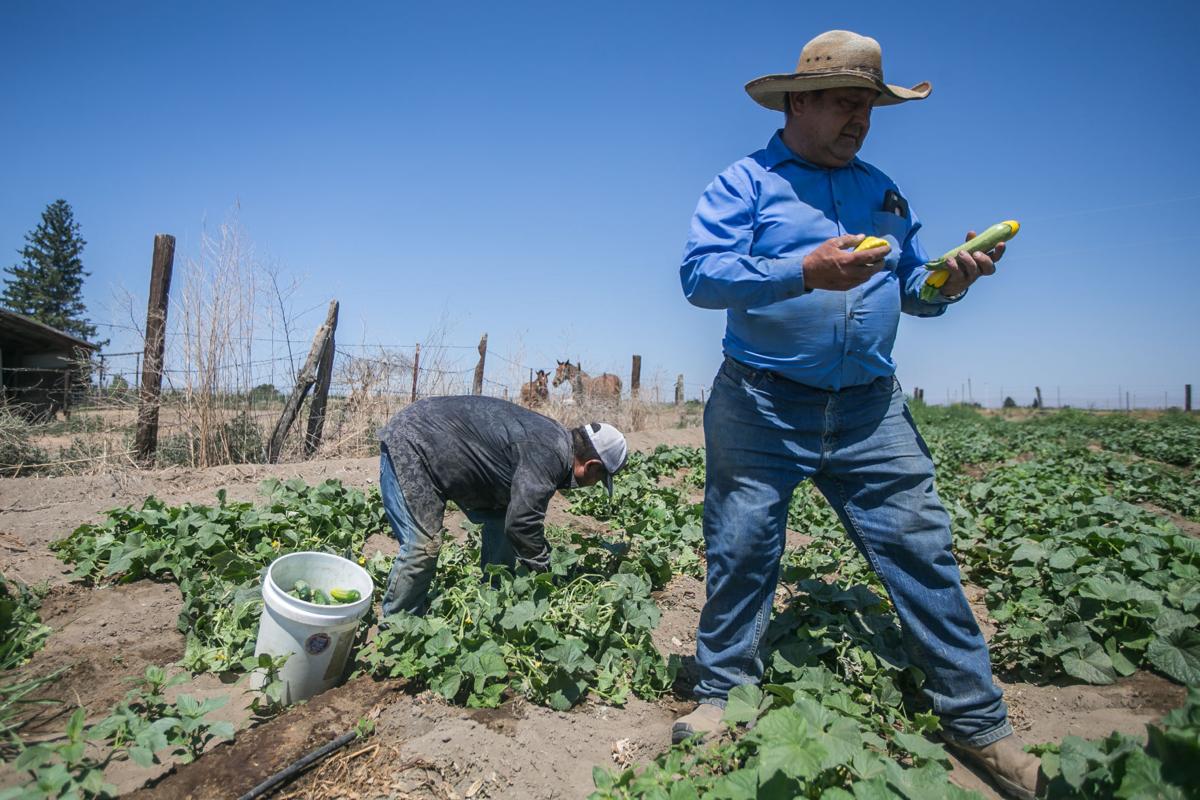 Hilario Alvarez, owner of Alvarez Organic Farms, right, picks a variety of cucumbers with a tight crew Monday, July 12, 2021, in his field along Linderman Road in Mabton, Wash. 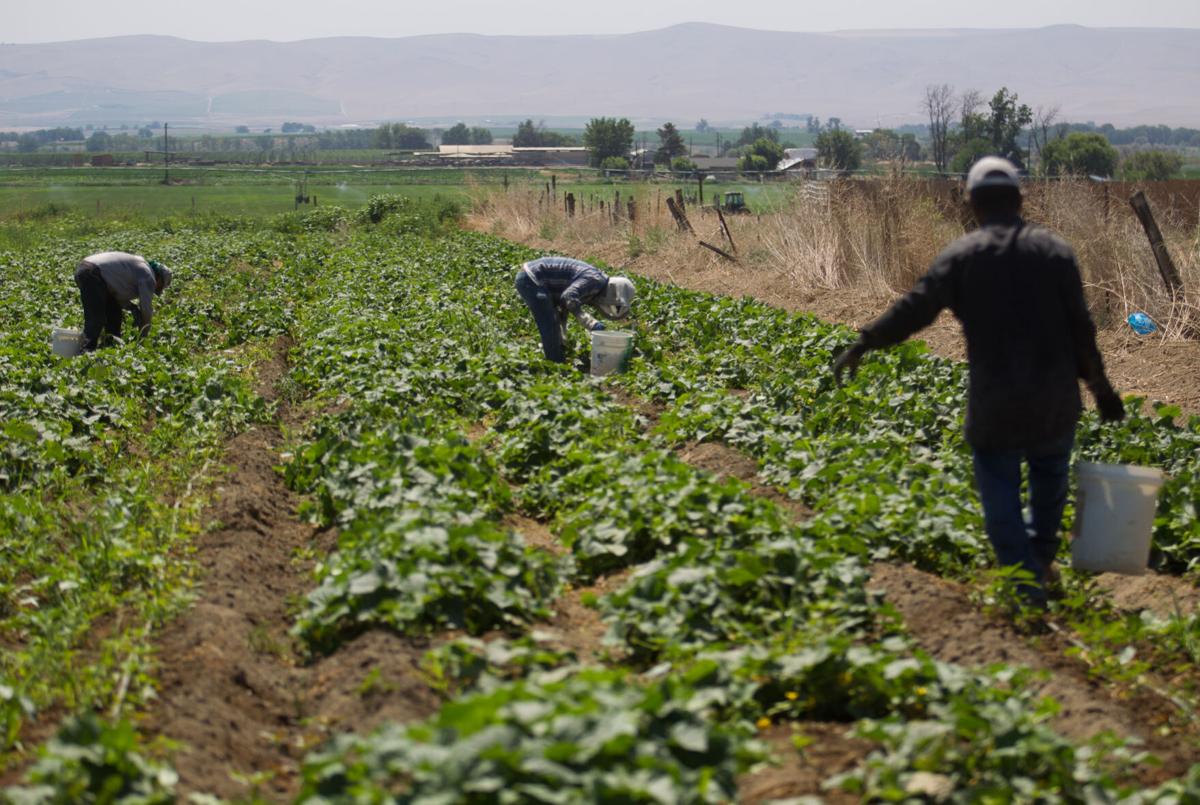 Three workers with Alvarez Organic Farms pick a variety of cucumbers Monday, July 12, 2021, in a field along Linderman Road in Mabton, Wash. 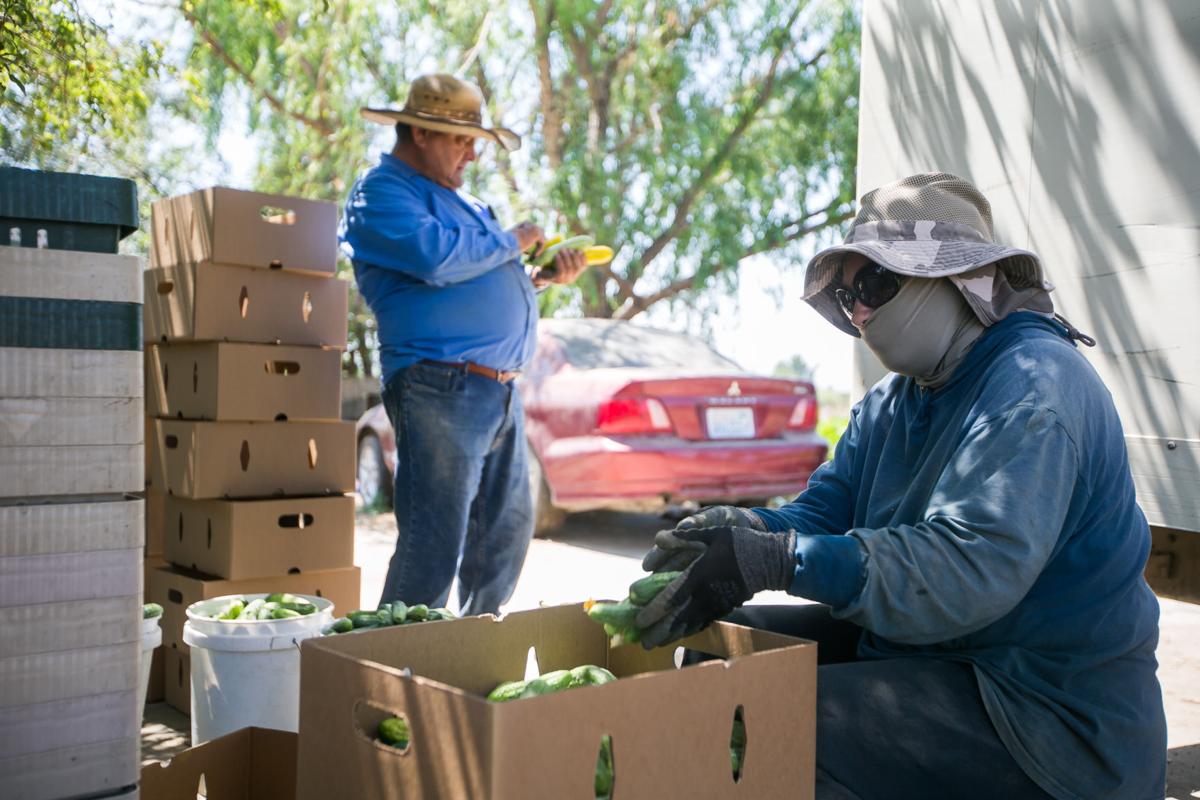 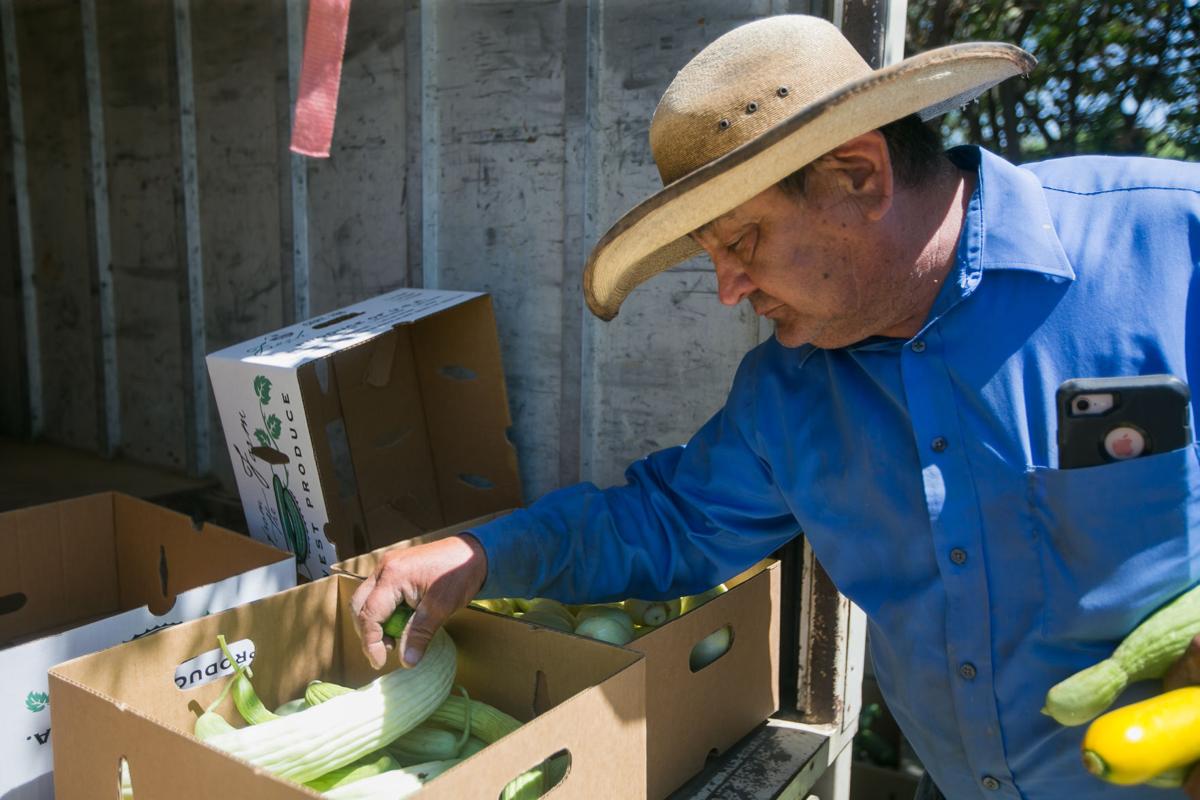 Hilario Alvarez, owner of Alvarez Organic Farms, sorts through a box of picked cucumbers Monday, July 12, 2021, in his field along Linderman Road in Mabton, Wash.

Hilario Alvarez, owner of Alvarez Organic Farms, right, picks a variety of cucumbers with a tight crew Monday, July 12, 2021, in his field along Linderman Road in Mabton, Wash.

Three workers with Alvarez Organic Farms pick a variety of cucumbers Monday, July 12, 2021, in a field along Linderman Road in Mabton, Wash.

Hilario Alvarez, owner of Alvarez Organic Farms, sorts through a box of picked cucumbers Monday, July 12, 2021, in his field along Linderman Road in Mabton, Wash.

In his 45 years of farming, Hilario Alvarez, 69, has never seen such a shortage of workers.

Alvarez is the patriarch of a family that has owned Alvarez Organic Farms in Mabton for the past 30 years. The operation covers 128 acres, but he has lost part of his harvest in recent weeks due to a lack of workers.

“A lot has been lost already,” he said. “We lost plenty of beets, we didn’t have workers to clear (the weeds). The problem is not planting, the problem is hoeing and harvesting.”

It’s almost time to pick 3 acres of elephant garlic, and if it isn’t harvested in a timely manner, it will have dark spots and won’t be suitable to sell, he said.

Four of the 5 acres of regular garlic are also ready for picking.

Other crops that should be harvested by this time of the year include squash, green beans, potatoes and okra, he said, but there are not enough workers.

Despite advertising job openings on a free job search program on Radio KDNA, and talking to other farmers and workers to spread the word to their friends and acquaintances about the opportunity to work, he still lacks employees.

Currently, the farm has 15 workers. At the end of the cherry harvest, others will return, he said.

Alvarez Organic Farms pays the minimum hourly wage in Washington state, $13.69. Other growers pay by what is harvested, which could put his farm at a disadvantage, he said.

It’s not unusual for those who worked at the farm the previous harvest to return. Although many are still harvesting cherries, they come in a few hours before 5 a.m. and from 7 to 9 p.m. to help him.

The family business, owned by nine children and their parents, feeds more than 10,000 people and focuses on selling directly to farmers markets in Seattle, Tacoma and other large cities in the western part of the state and in Pasco, as well as to restaurants.

“We have 400 varieties of vegetables: 200 kinds of chili peppers, 25 kinds of tomato, 35 kinds of eggplant, 15 kinds of potato, three varieties of okra, two kinds of peanuts, five kinds of onion, tomatillo, sweet potato, 10 kinds of green beans, two of beans, six of peas,” he said proudly.

In 2009, he received a state award for being the Latino grower with the most varieties of vegetables and fruits.

Rodriguez and staff from the Center for Latino Farmers, one of RCDR’s three main programs, met with small farmers and land operators about the situation. In all, the center has 800 contacts, including those interested in becoming agricultural producers, she said.

It’s become common for larger growers in the area to hire foreign guest workers through the H-2A program. H-2A workers must be provided housing, transportation and food, according to rules set by the U.S. Department of Labor. In Washington state, their wage must amount to $16.34 per hour.

“We know that the shortage of workers has existed for several years,” Rodriguez said. They (small farmers) can’t pay higher wages (of H-2A workers). They don’t have enough resources to be able to pay them more or bring in these workers to help them.”

One possible solution would be to create a co-op among small farmers interested in hiring guest workers. This option will be discussed during the next Small Farmer Conference on Aug. 5, Rodriguez said.

Alvarez said that “he is with his people,” his workers, but he doesn’t think it’s a bad idea to form a co-op to bring in H-2A workers.

“It’s very good because if I don’t break even, next year I won’t farm anything,” or maybe I would switch to crops like alfalfa or corn that require less care, he said. His children might want to continue farming and he wants to help them, he added.

H-2A costs cannot be covered by small farmers as readily as large agricultural producers who have hundreds of acres of land, Rodriguez stressed, hence the idea of pooling together to hire labor.

Whatever the decision, it is the consumer who ultimately will pay the extra costs. The end price will have to go up, Alvarez said, and that saddens him because he plants crops to feed people.

“I like my work, that we farm organically, many people benefit, they are fed ... I’m not going to stop helping my children until I die,” he stressed.