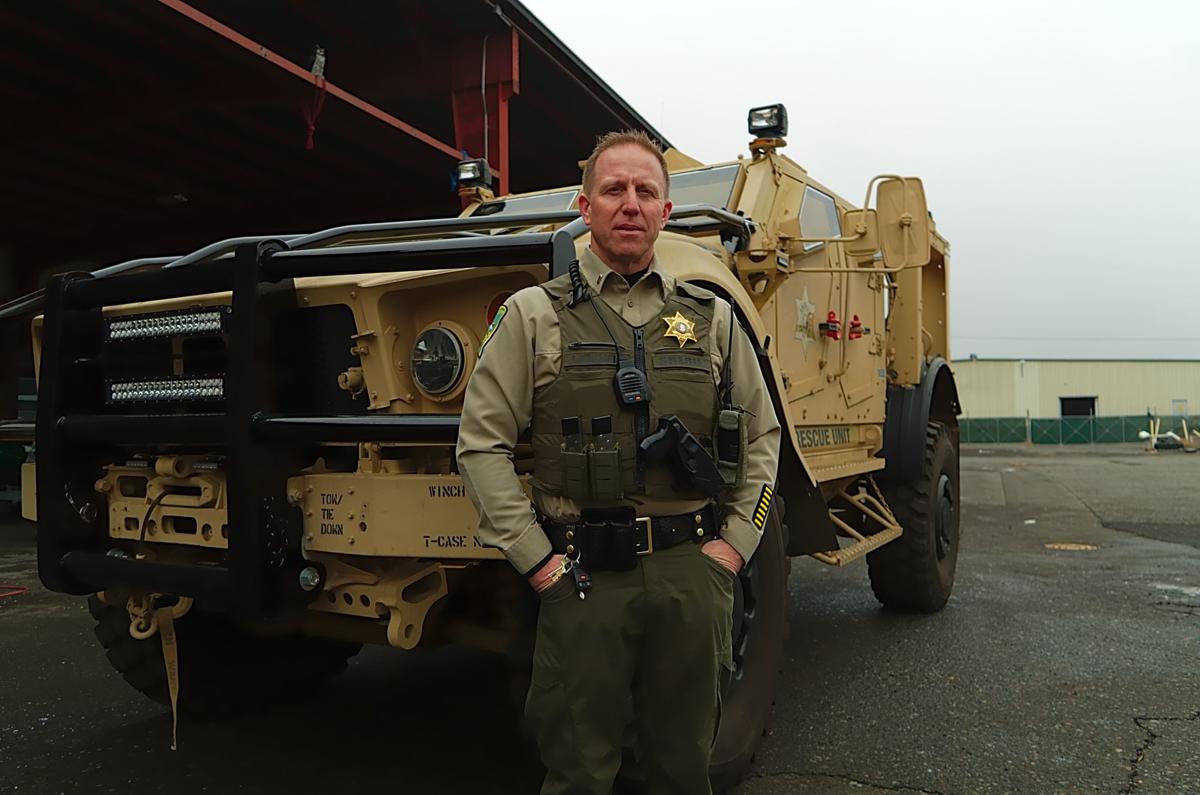 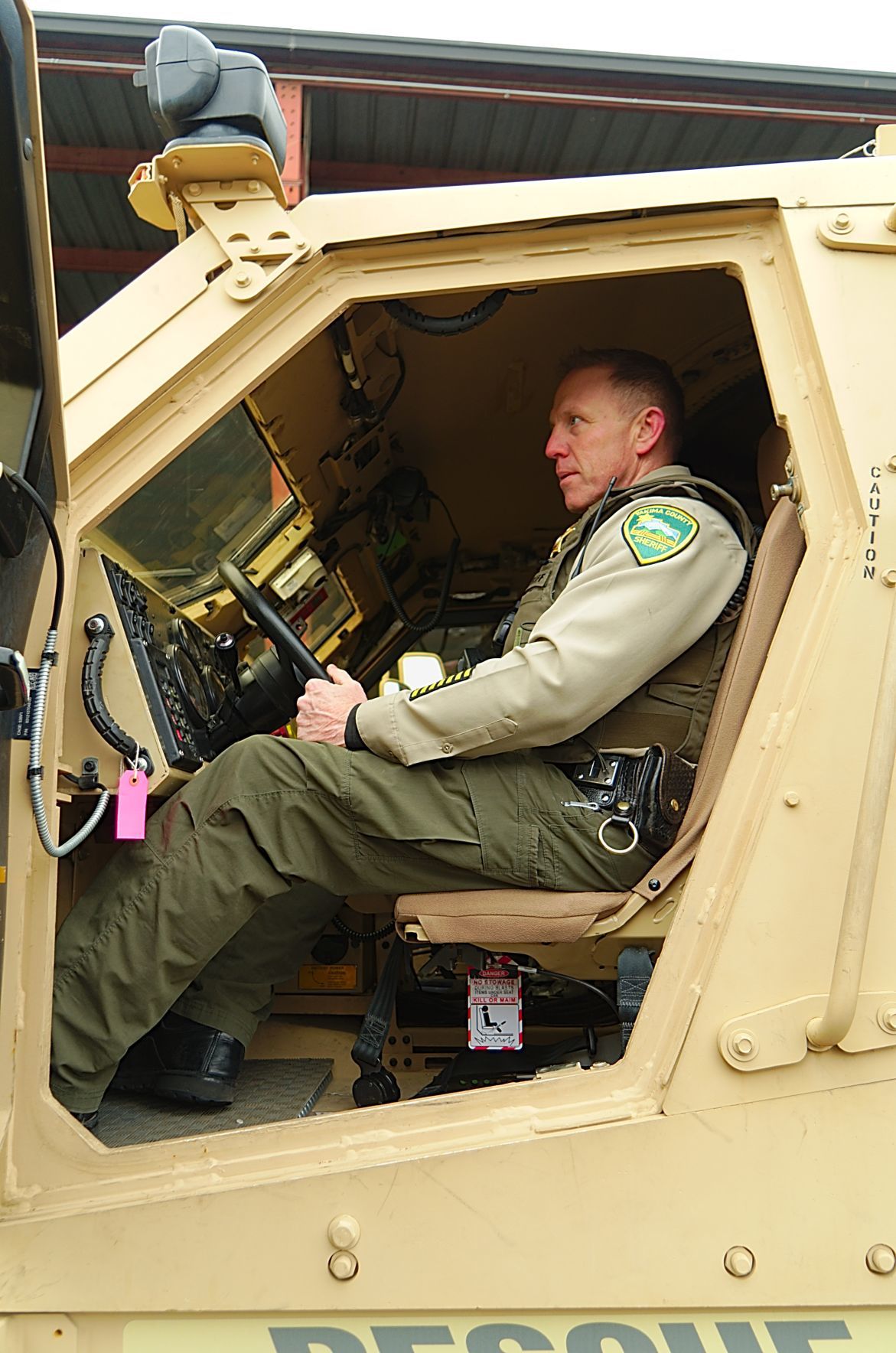 Yakima County sheriff's Lt. Aaron Wuitschick looks over the controls of the department's mine-resistant, ambush-protected vehicle Tuesday, Dec. 17, 2019. The vehicle, which will supplement Yakima police's SWAT team and be used for standoffs or active-shooter incidents, was acquired through a military surplus program. (Donald W. Meyers/Yakima Herald-Republic) 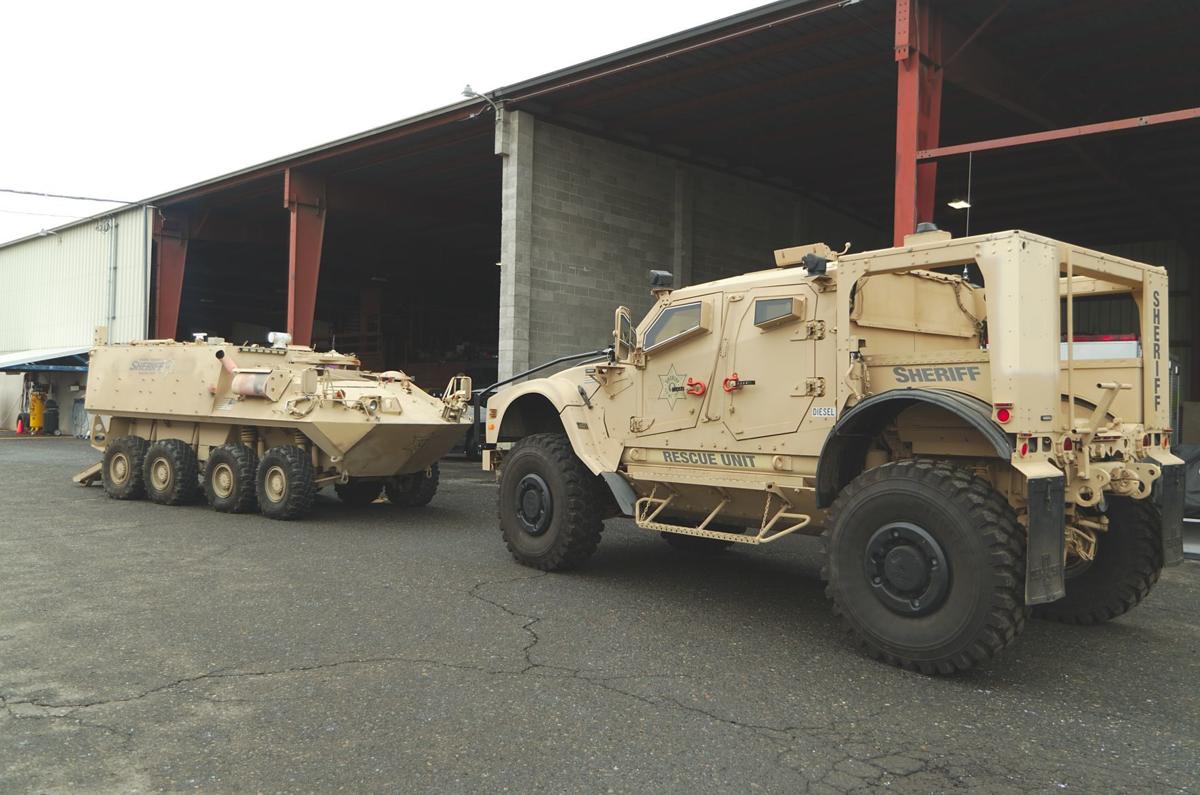 Yakima County sheriff's Lt. Aaron Wuitschick looks over the controls of the department's mine-resistant, ambush-protected vehicle Tuesday, Dec. 17, 2019. The vehicle, which will supplement Yakima police's SWAT team and be used for standoffs or active-shooter incidents, was acquired through a military surplus program. (Donald W. Meyers/Yakima Herald-Republic)

Nearly six years ago, when sheriff’s deputies were pinned down by gunfire while serving an arrest warrant, Yakima police SWAT officers came to the rescue.

SWAT officers walked alongside their armored Bearcat truck, leaving the back open for the deputies to get in while they provided cover.

“I was never so happy to see a SWAT vehicle,” said sheriff’s Chief Criminal Deputy Carl Hendrickson, one of the pinned-down deputies.

Now, the SWAT team has a new vehicle that would provide more cover in a similar situation.

“We could take the taxpayers’ money and buy a civilian version, or we could get a similar type for free,” said Lt. Aaron Wuitschick, who is also deputy commander of the Yakima SWAT Team.

“We’re not changing our patrol stance or philosophies about the way we normally police our citizens,” said Union Gap police Chief Greg Cobb, whose office also has an armored military vehicle. “This is just a piece of equipment.”

Since 1991, the Defense Logistic Agency’s 1033 program has provided surplus military equipment to police agencies around the country. Under the program, the equipment is provided for free, with the recipient responsible for paying shipping and maintenance costs.

Since 1994, Washington state police agencies have received $33.5 million in surplus equipment, ranging from rain ponchos to rifles to armored vehicles, according to defense department records.

MRAPs were designed in response to the armor-piercing roadside bombs that were used in Iraq and Afghanistan. With thicker armor, the vehicles are designed to protect passengers from such attacks.

The sheriff’s vehicle has windows with more than an inch of bulletproof glass and the doors are heavy with armor plating. Once inside, most outside noise is muffled by the armor. But, Wuitschick said it handles almost like a car, due in part to heavy-duty power steering.

Sheriff’s officials received the MRAP in July from a storage facility in Texas, Wuitschick said. It is valued at $767,360. The Bison came last year.

Union Gap got its own MRAP in August and is still outfitting it, Cobb said, while Grandview police obtained a vehicle in 2013, according to Defense Department records.

While the program saves money for departments looking for equipment, it has its critics who see it as unnecessarily militarizing police departments and increasing tensions between police and the communities they serve.

A 2014 American Civil Liberties Union report argued that providing agencies with military-grade equipment and vehicles, along with tactical training, creates a “warrior” mentality that views the public as potential enemies rather than people to be served.

The Obama administration put restrictions on the program in the wake of unrest in Ferguson, Mo., after an unarmed black man was shot by police. Under Obama’s order, agencies had to justify why they needed armored vehicles.

The restriction was lifted by President Donald Trump.

Wuitschick and Cobb both disagree with the characterization of the vehicles as militaristic.

The sheriff’s MRAP, which seats five officers and has a roof hatch from which an officer can fire a rifle, is intended to be a rapid-response vehicle that can assist Yakima SWAT, the Pacific Northwest Violent Offender Task Force, Yakama Nation Tribal Police and other agencies where an armored vehicle is needed, Wuitschick said.

Unlike the larger but slower Bison, the MRAP is capable of driving at 65 mph, Wuitschick said. Its tires can be partially deflated from inside, giving it more traction on loose soil, he said.

In a standoff situation, Wuitschick said the vehicle would allow officers to position themselves close by while remaining safe from gunfire. Combined with the Bison, the vehicles can evacuate people in an active-shooter situation.

He pointed to the shooting on the Las Vegas Strip in October 2017, where 58 people were killed and more than 800 were injured. In that situation, rescuers were moving wounded people out in whatever vehicles were available, but they were doing it while exposed to gunfire, Wuitschick said.

The words “Rescue Unit” are emblazoned on the sides of both the sheriff’s vehicles.

Cobb said having additional vehicles in the Valley also helps protect officers if there is a standoff. Before, Yakima police’s Bearcat vehicle was the only armored vehicle SWAT officers had at their disposal, and that meant only one side of a building could be covered by officers under relatively safe cover.

With the sheriff’s, Union Gap’s and Grandview’s vehicles, there can be at least two vehicles available at any situation, improving officer safety, Cobb said.

Wuitschick and Cobb said using the program makes fiscal sense, since a civilian-built vehicle like Yakima’s runs about $425,000, while the military surplus has already been paid for by taxpayers years ago and is made available to departments.