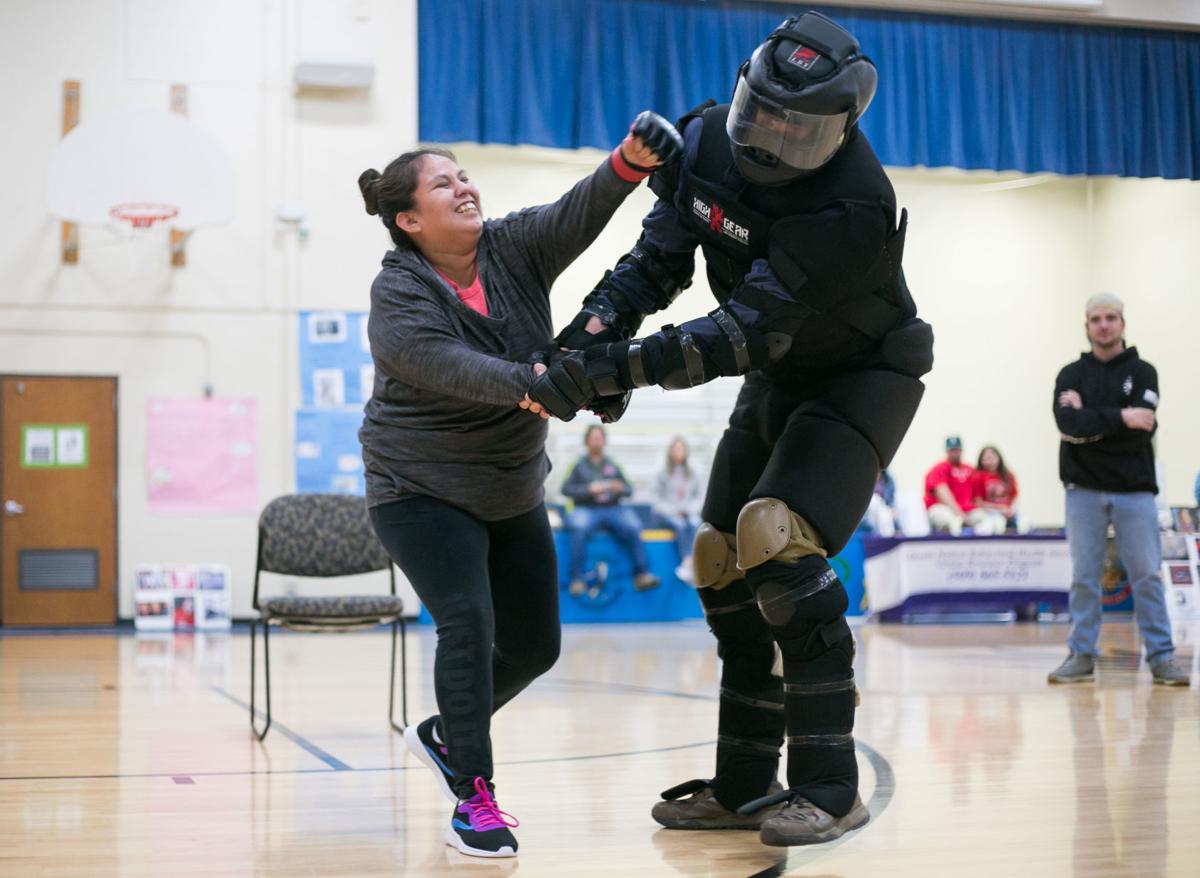 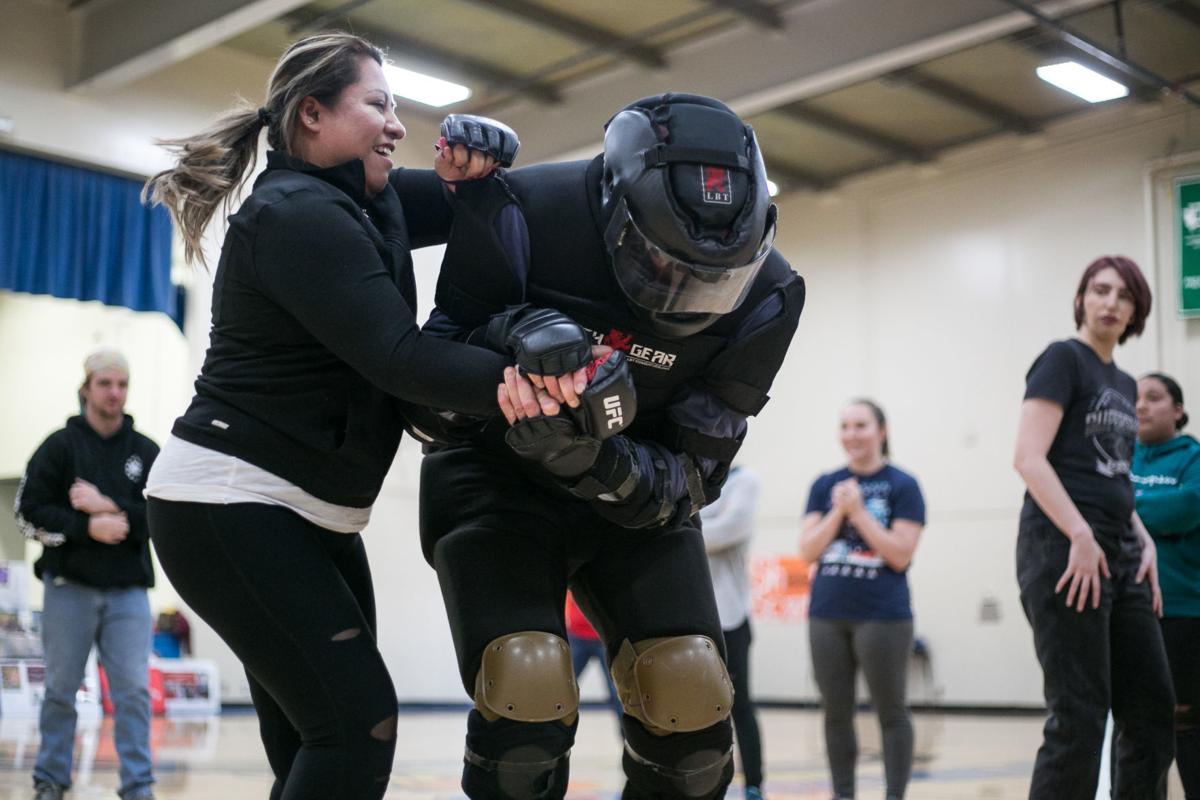 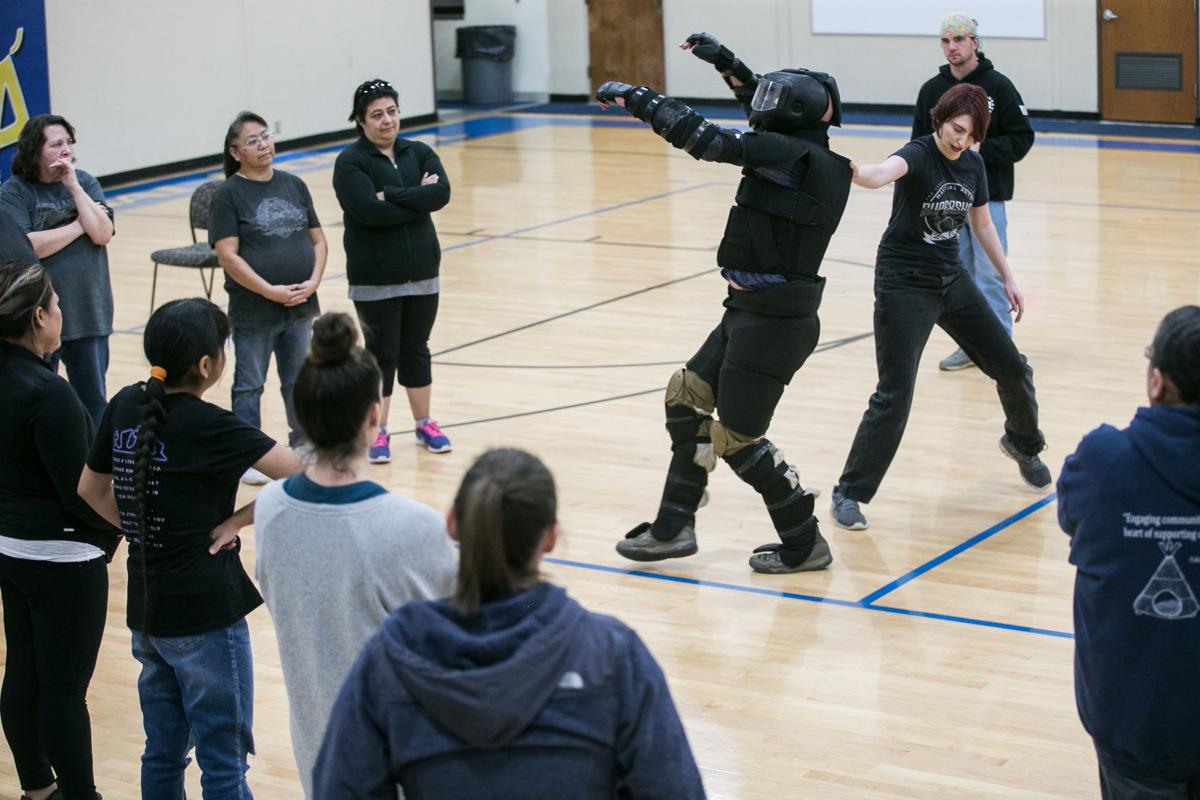 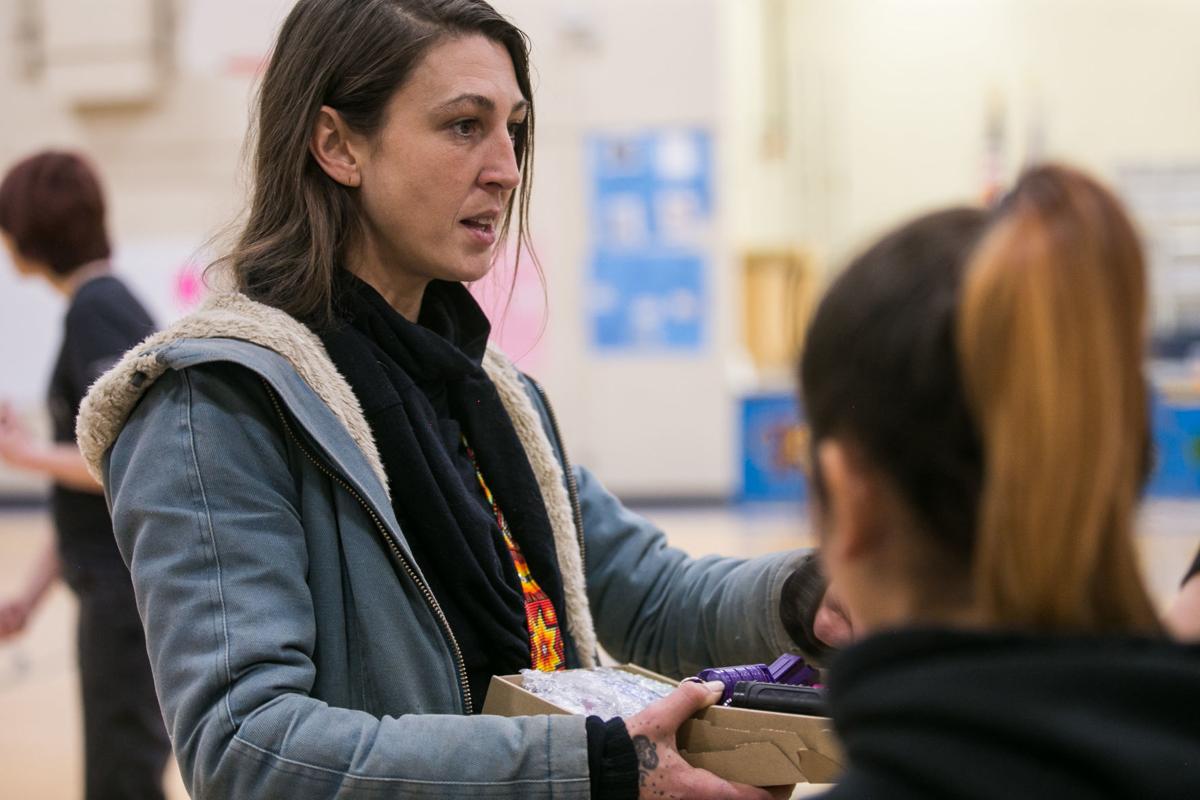 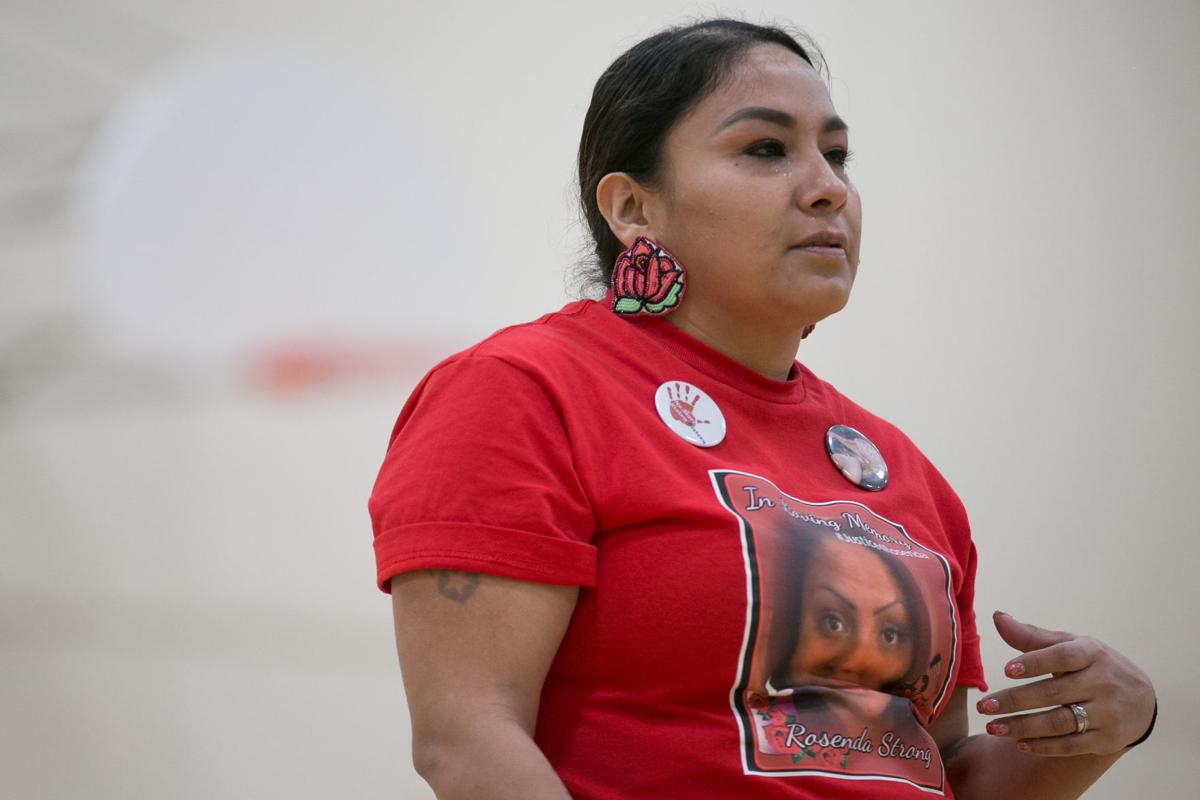 TOPPENISH — Your life or your phone? The answer seems obvious. But many are so protective of their phones, or wallets or car keys, they’ll put possessions before their survival.

Phones are great for getting photos and video of potential attackers, or suspicious vehicles, or seemingly dangerous situations. With a touch, certain apps can quickly let others know the owner’s location. When people need to fight back, though, they need full use of their arms and hands. That means tossing the phone, the wallet, the car keys.

They aren’t worth your life, experts stressed during a recent free self-defense class for girls and women at Yakama Nation Tribal School.

“It’s in our brains not to drop stuff,” said Matt Meyers of JACT — Joint Associates Center For Training in the Tri-Cities, which provides professional and civilian training in self-defense, medical issues and firearms. “Drop it or throw it at the person.”

Joining Meyers, who volunteered his time to lead the session, were Shauna DesJardins, a mixed martial arts competitor and trainer who is also skilled with weapons, and Darrin Deweber, who has worked with Meyers for years, training and sparring.

“The reason I’m here today is because I think self-defense is a human right,” Meyers said.

At 30 registrants the class was full, with a waiting list, but Tessier Bull had encouraged others to attend. Bull, who lives in Seattle and part-time in the Cowiche area, organized the class in recognition of murdered and missing indigenous women, and she plans for more lessons, she said.

Bull had reached out to Cissy Strong Reyes of Toppenish with her thoughts on a free self-defense program for at-risk women, especially on reservations, in hopes of bringing more awareness and helping provide some solutions.

Reyes, whose younger sister, Rosenda Sophia Strong, went missing and was found murdered nearly 300 days later, told Bull she wanted to help. Reyes spoke about her sister and set up a table with information to bring awareness as the FBI continues to investigate. No arrests have been made.

“She does deserve justice, and I’m going to give that to her,” Reyes said. “I’m not going to stop.”

The Victim Resource Program of Yakama Nation Behavioral Health also provided information on its services at a table with a big banner showing its phone number: 509-865-5121.

The trainers worked closely with the participants, who ranged from grandmothers to young girls. DesJardins worked one-on-one with a particularly shy girl. As participants stood in a big circle on the gym floor, trainers showed what they should know, from kicking to do the most damage to fighting past a guy to escaping a chokehold by using both arms in different ways to break the attacker’s grip.

“This dude, when he grabs me, I’m going to take my hand back and shove my fingers in his eyes,” Meyers said. “I’m going to grab his thumb and I’m going to break his thumb.”

DesJardins demonstrated how to break away from someone grabbing your arm. If the attacker grabs the top of your forearm, use your other hand to slam on their hand or hit their knuckles hard. If they grab under your forearm, pull back hard.

She also showed how make a correct fist and punch to do the most damage. Participants practiced making tight fists with both hands as she spoke.

“Do not put your thumb inside your fist — always in front of your fingers, and never on top” of them, she said. When punching someone, keep your arms straight; don’t let elbows angle out like wings. Hit hard and fast.

“When you punch, punch toward the throat. Aim for the throat,” she said, stressing that they should avoid the mouth and teeth because teeth are hard, which could injure or break someone’s hand.

Meyers encouraged the women to aim for the throat, the eyes, the nose and the ears when punching or attacking with hands. Punching the chest or stomach won’t buy enough time, but it takes just five pounds of pressure to rip an ear off. “A 3-year-old could do it,” he said.

“Any time you’re kicking, you’re stomping,” she said. “The goal is to hit the knee. Put your body into it. Push forward. Don’t lean back. Don’t push — stomp!”

Fast, strong kicks in the groin can do a lot of damage. She encouraged the women and girls to kick the knee and scrape their shoe all the way down the shin.

“Don’t just hit me; hit through me,” Meyers said. “Break that knee. Break it!”

Meyers stressed that those being attacked should never turn their back. “That makes you much more vulnerable,” he said. They should yell, scream, kick, slide on their back to get distance instead of being distracted by getting back up. Once they get the chance to get back up, do it quickly.

Trainers offered other advice to ward off potential attackers, such as choosing a well-lit parking spot and parking near cameras. Get items out of your purse before you get to your car, and have keys ready as you approach your car. “Criminals are opportunists,” Meyers said.

And though car and personal alarms can help and should be used, add to the clamor to get attention. Scream “fire,” DesJardins said.

Trainers also talked about carefully considering rides offered by friends of friends, or even friends. Check for child locks — can you open that door from the inside? If you’re trapped in a car with someone you no longer feel safe with, turn on the overhead light. Yell. Scream. Hit the emergency flashers. Roll down the windows. Demand to be let out. Carry a pocket knife with a seat belt cutter and window glass breaker.

Turn down those who try to pressure you into a ride, they said. Women and girls are still safer to take a walk they know than ride in a car they don’t know.

Advice about what do to do in a potentially deadly situation isn’t enough, trainers stressed. Women and girls need to practice what they learned on a regular basis.

Meyers encouraged participants to build mental awareness to ensure they can overcome psychological barriers to fighting back. For example, putting a finger through someone’s eye. Some “are very shy to hurt that bad guy,” Meyers said.

“Self-defense is messy,” he said. “I am here to make sure you guys go home every day.”

Shauna DesJardins, a mixed martial arts competitor and trainer who helped lead the self-defense class on Jan. 4, shared some tips.

Test route during the day

Where is there more traffic?

Are the roads well-lit?