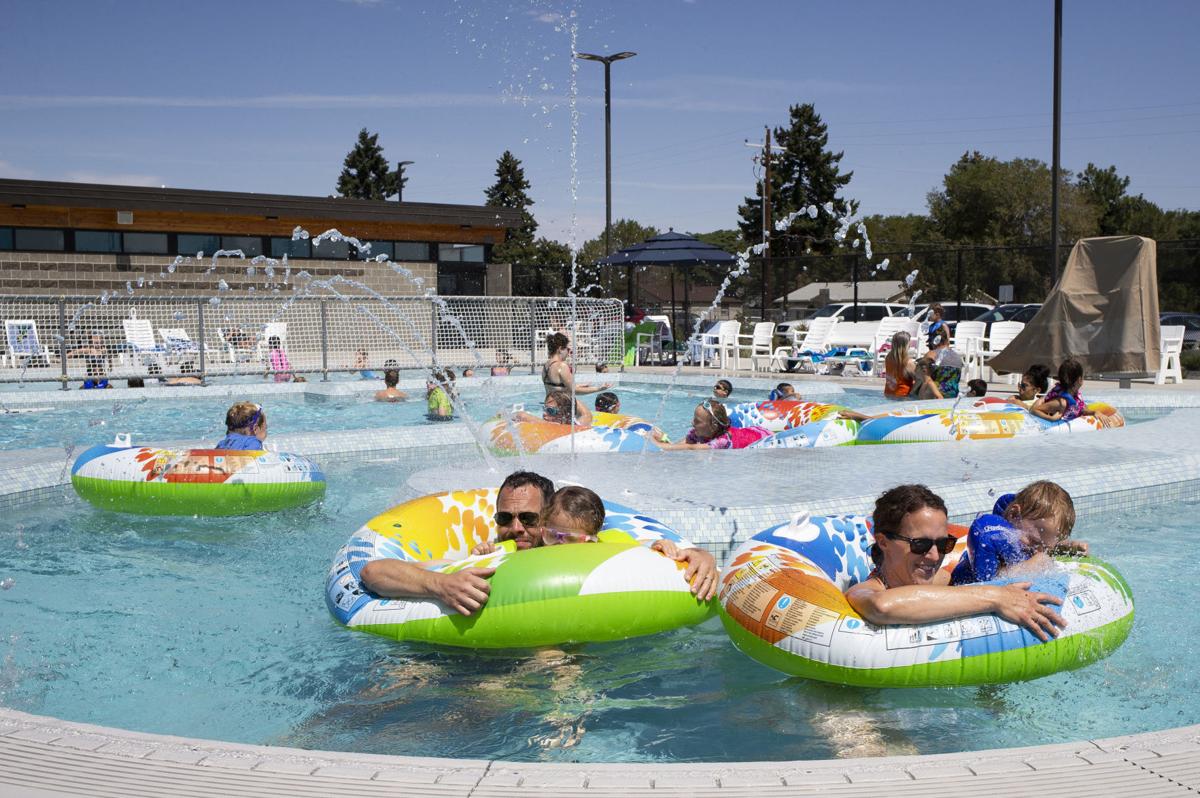 People float around the lazy river pool during the summer at the Selah Aquatic Center. 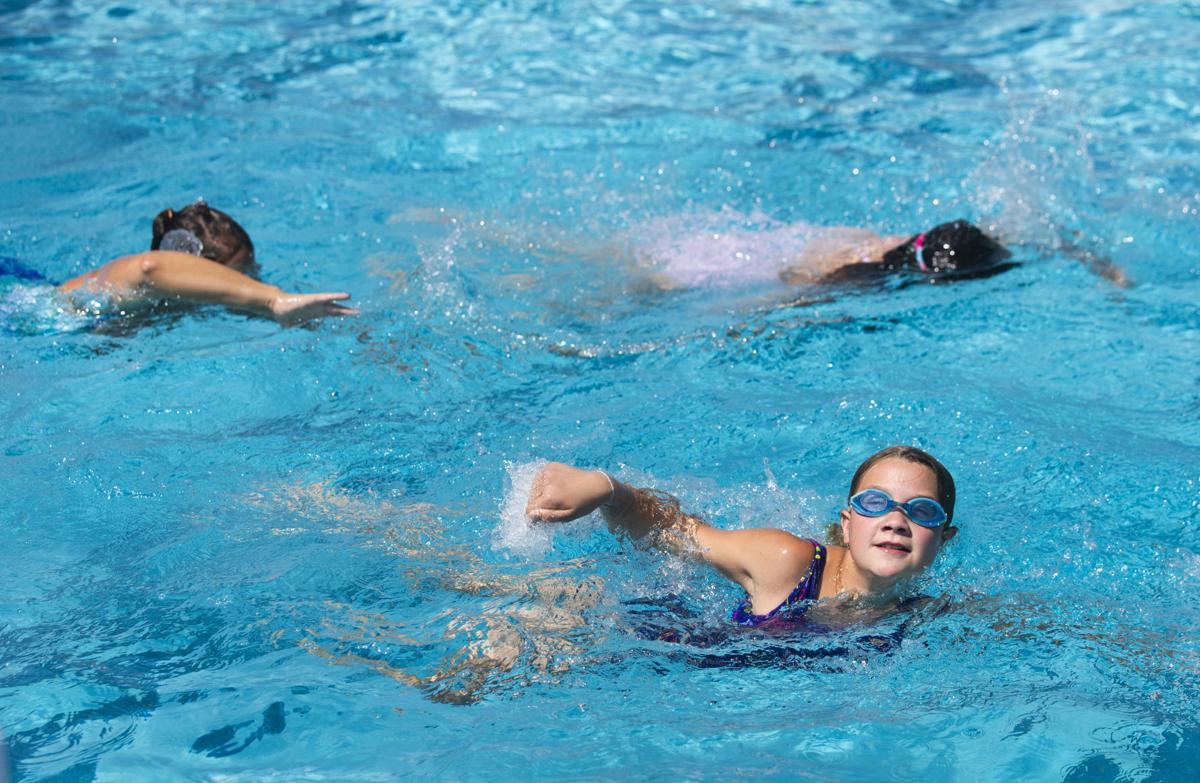 From left, neighbors Morgana Holmen, Hailey Huffman,11, and Rylee Thornton,11, race across the pool at the Selah Aquatic Center on Friday.

People float around the lazy river pool during the summer at the Selah Aquatic Center.

From left, neighbors Morgana Holmen, Hailey Huffman,11, and Rylee Thornton,11, race across the pool at the Selah Aquatic Center on Friday.

Tyler Sugden and his family have been to the newly opened Selah Aquatic Center at Wixson Park, and he’s impressed.

“It’s always fun to have nice things in Selah. It’s a real joy and a real treat,” Sugden said. “It’s a step up from what we had before.”

But with the tax levy to pay for the pool’s operation falling just short of the 60 percent required for passage, the Selah Parks and Recreation Service Area is weighing what the $6.2 million facility’s future will be.

“Swimmers can still enjoy the newly opened pool for the remainder of this year’s season thanks to the generous support of many community members,” SPRSA Chairwoman Kellyann Ergeson said. “However, future seasons are in doubt without a source of operational funding.”

One option is to shut down the pool at the end of this year’s pool season and let it sit empty next year. Another is to find donors and other sources of funding to keep the center going for another abbreviated season until a levy can be passed.

SPRSA will discuss its options at a board meeting Monday afternoon at the Selah Aquatic Center at Wixson Park.

The Selah Parks Foundation, which raised the money to get the pool open this year, has already committed to again ask the community to pitch in and keep the pool open through fundraising.

“We are going to continue to help,” said foundation president Tammy Allan.

SPRSA was created several years ago to provide money to maintain and operate the city-owned pool at Wixson Park. From 2012 to 2018, it raised $120,000 each year through a maintenance and operations levy on property owners within the boundaries of the Selah School District, which includes some of the unincorporated area around Selah. That money was paid to the city, which was responsible for maintaining the pool and hiring staff to run it.

In 2015, voters approved a 20-year, $6.2 million bond to replace the aging pool with a state-of-the-art aquatic center. It passed with 66.5 percent approval.

Originally envisioned as a three-pool complex with a retractable cover over one of the pools for year-round use, the project was pared down to remain within budget. Meanwhile, the project was delayed due to disputes with the city over whether it could lease the land to SPRSA before seeing a final design, among other things.

The final design incorporated the main elements of the original proposal — a competition pool, a beach-style entry recreational pool and a lazy river — into a single pool, with the retractable cover deferred until finances permit its installation.

In addition to SPRSA owning the pool, the board decided it would take over operations as well to reduce costs.

Last year, a $305,000 maintenance and operation levy received 59.17 percent approval, less than a percentage point from the 60 percent required to pass.

The foundation raised about $160,000 to operate the pool for a few weeks this summer after last year’s levy failed. The pool opened in late July, and Allan said attendance and revenue exceeded expectations. She said the facility is operating at maximum capacity and has already brought in more money than the old pool did in its last year of operations.

Allan, who’s been to the pool a few times this year, said the new facility is better than the old pool, especially in the area of keeping the water comfortably warm for swimmers.

“They never could keep the temperature fluctuation correct,” Allan said of the old pool.

The only significant glitch in operations was people were getting scraped feet on the grating in the lazy river, where people drift in a slow current. Sugden said his son had a few minor cuts and scrapes from it.

Pool staff said the scrapes were the result of the grating’s design, which is required to be slip resistant. The grating has since been sanded to make it smooth enough to not scrape people’s feet while remaining within regulations.

But the pool’s popularity has not translated over to the ballot box. Tuesday’s initial election results showed the levy at 58.03 percent yes, less than 2 percentage points shy of passage.

As of Thursday afternoon, the percentage had increased to 58.98 percent.

If the pool levy approval does not increase to 60 percent or more by Aug. 20, when the ballot numbers are certified, Ergeson said the pool will be without taxpayer funding until at least 2021, the earliest another levy could be put into effect if approved by voters.

And she’s hopeful the community will come through, after swimming in the new pool. Plus, SPRSA will have a better handle on how much money will be needed for next year.

“After a whole year of having the pool open, they will have a better idea of what the costs are,” Allan said.

“We want to get people in there see what it’s about.”

Meeting about the pool

The Selah Park and Recreation Service Area board will meet to discuss options for funding next year's pool season at 5:30 p.m. Monday. The meeting will be at the Selah Aquatic Center at Wixson Park.