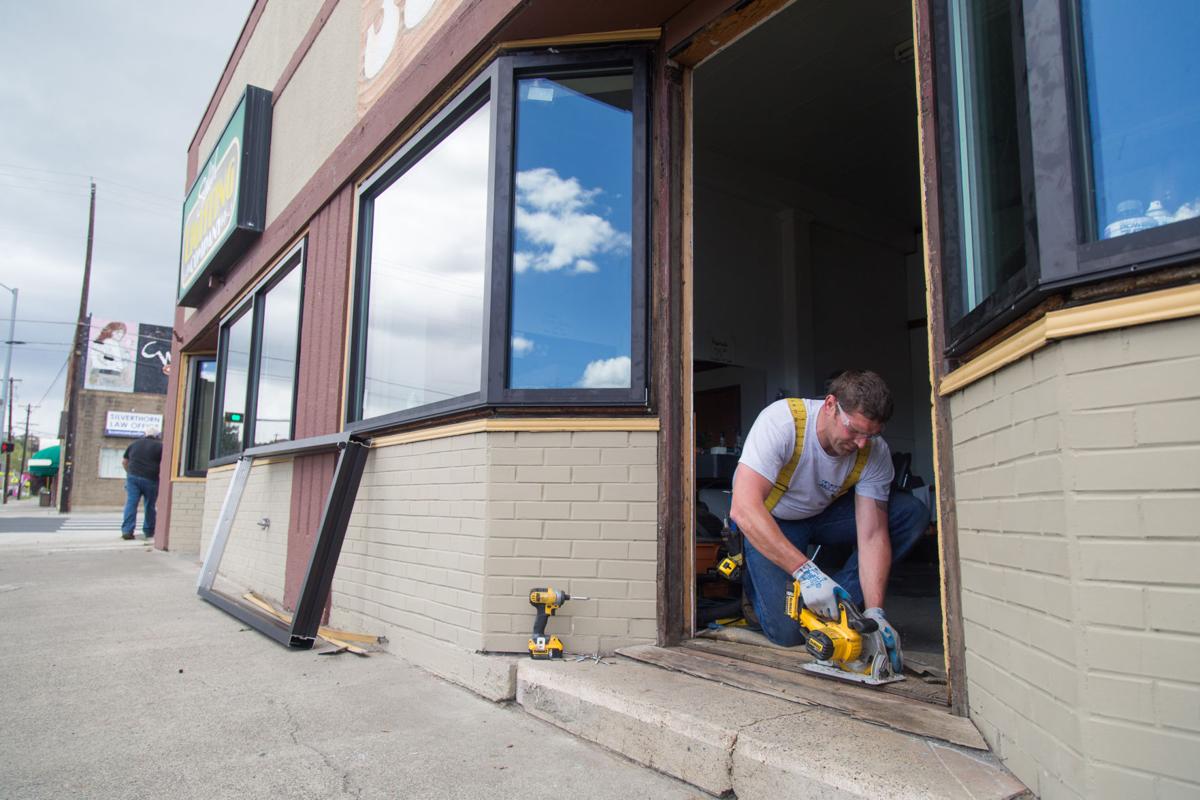 Dennis Langton, of McKinney Glass Commercial, uses a handheld saw to carve out space for a new door at the Old Selah Lighting building in Selah, Wash., Friday, May 12, 2017. (SOFIA JARAMILLO/Yakima Herald-Republic) 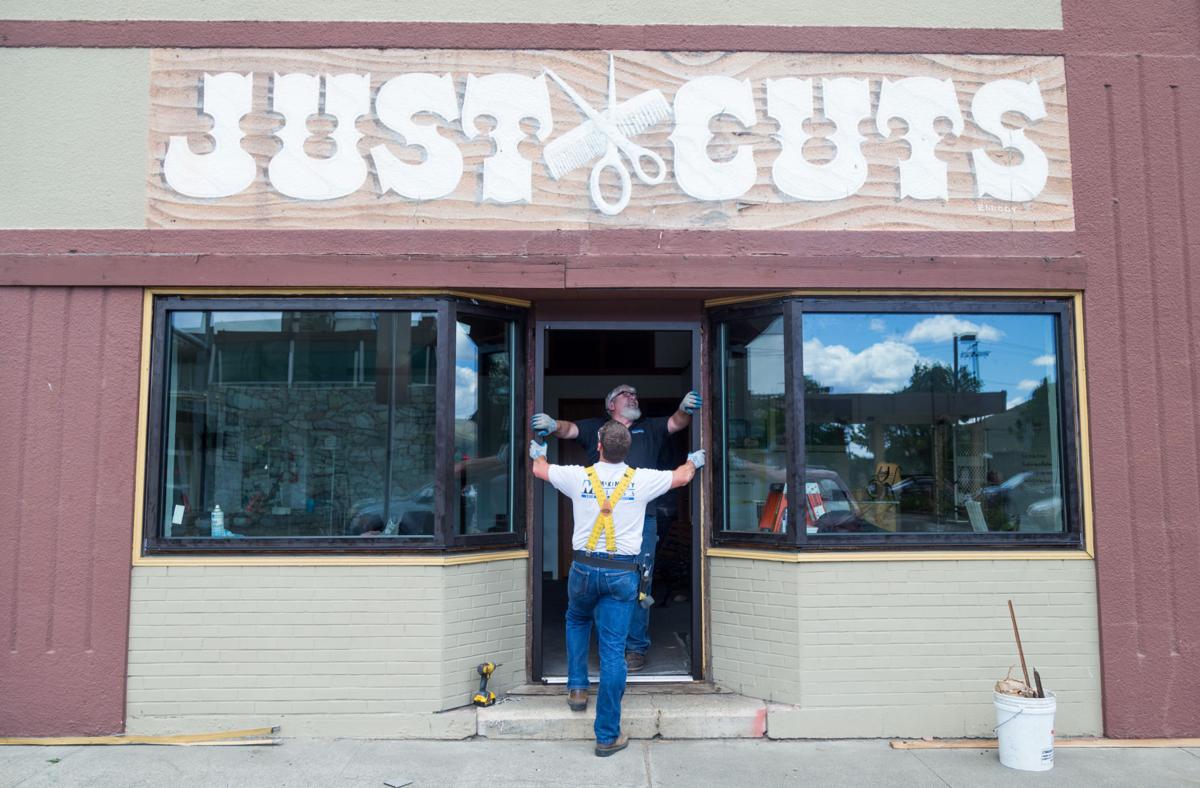 Steven Callahan, back, and Dennis Langton, front, of McKinney Glass Commercial, put in a new door at the Old Selah Lighting building in Selah, Wash., Friday, May 12, 2017. (SOFIA JARAMILLO/Yakima Herald-Republic)

Dennis Langton, of McKinney Glass Commercial, uses a handheld saw to carve out space for a new door at the Old Selah Lighting building in Selah, Wash., Friday, May 12, 2017. (SOFIA JARAMILLO/Yakima Herald-Republic)

Steven Callahan, back, and Dennis Langton, front, of McKinney Glass Commercial, put in a new door at the Old Selah Lighting building in Selah, Wash., Friday, May 12, 2017. (SOFIA JARAMILLO/Yakima Herald-Republic)

SELAH, Wash. -- Some of this city’s most historic buildings hide behind nondescript fronts that do little to attract visual interest or hint at their fascinating past.

But that’s starting to change.

Workers removed piers for two billboards that came down about a year ago. They have installed new doors and windows and will remove the old overhangs and signage. They will also stucco the west side of the building, adding some flair to the squat windows on that side with decorative trim. They will plant trees and shrubs as well, enhancing a busy intersection.

“We’re giving it a face-lift,” said Rich Goodall, who’s overseeing the project as its general contractor. His mother owns the building.

That face-lift is coming with help from the Selah Downtown Association’s new Business Facade Improvement Grant Program, which the organization launched in February.

“When the outside of your buildings look good, it lifts the whole community up,” said Whitney Stohr, executive director of the downtown association.

“The facade makes a big difference ... (and) really benefits the community as a whole.”

A former volunteer member of the Arlington, Va., Beautification Commission, Stohr is a strong supporter of historic preservation and how it can revitalize downtowns. Stohr serves as vice chair of the city of Yakima’s Historic Preservation Committee.

Selah’s nonprofit downtown association is a member of the Washington State Main Street Program, which follows a four-point approach to economic development centered on organization, promotion, design and economic restructuring.

“The Main Street program is kind of a natural fit for historic preservation,” Stohr noted.

The program boosts sagging downtowns by emphasizing a community’s unique heritage and attributes, among other local efforts. By enhancing its historic architecture, a city can add visual interest and drive economic development by attracting more shoppers and businesses downtown.

Washington is home to 33 Main Street Communities, which include Ellensburg, Prosser and Yakima.

Under the state program, cities and businesses can pledge to donate to Main Street programs, such as downtown associations, and claim three-quarters of the donation as a tax credit on the following year’s utility tax or business and operating tax payments.

Selah’s downtown organization budgeted $10,000 for this inaugural grant program year, Stohr said. The Lighting Company building owner already had a project in the works, she noted.

“We hoped that we could help them,” she said.

Goodall received an $8,000 grant for his project, while Tim Lantrip from Sundance Espresso was offered up to $2,000 in matching grant funds to help cover the costs of new lettering on his new location, Stohr said.

“He just moved from a drive-through espresso to a sit-down cafe in the old NorthTown building in our downtown,” she said. “The building complex that he is now located in has design guidelines that all its leasees must comply with.”

While the building that housed the Selah Lighting Co. for 12 years is newer than some in Selah, its history is just as rich. It’s been a drugstore, a cigar shop, a tavern, an antique mini-mall and a real estate office, Goodall said.

The lighting business closed about three years ago, he added.

“We love that building. It’s a good building,” said Goodall, noting it has a newer roof and other upgrades. “It’s rock-solid; there’s no reason to tear it down.

“It’s like Fort Knox — tearing it down would be a considerable effort,” he added.

Chalisa Weippert, owner of the Thai House, has said the improvements contributed to a 25 percent boost in sales immediately and sales have continued to grow since then.

In 2016, Loofburrow Wetch Architects received a grant for an outside lighting project on the outside and another grant funded facade restoration of the Lee Semon building, Monick said. Removal of the mid-century facade of that structure generated a lot of interest downtown and beyond.

Stohr is happy to see work underway in Selah. She and others hope to award facade improvement grants there annually, she said.

“It will make a difference,” she said.