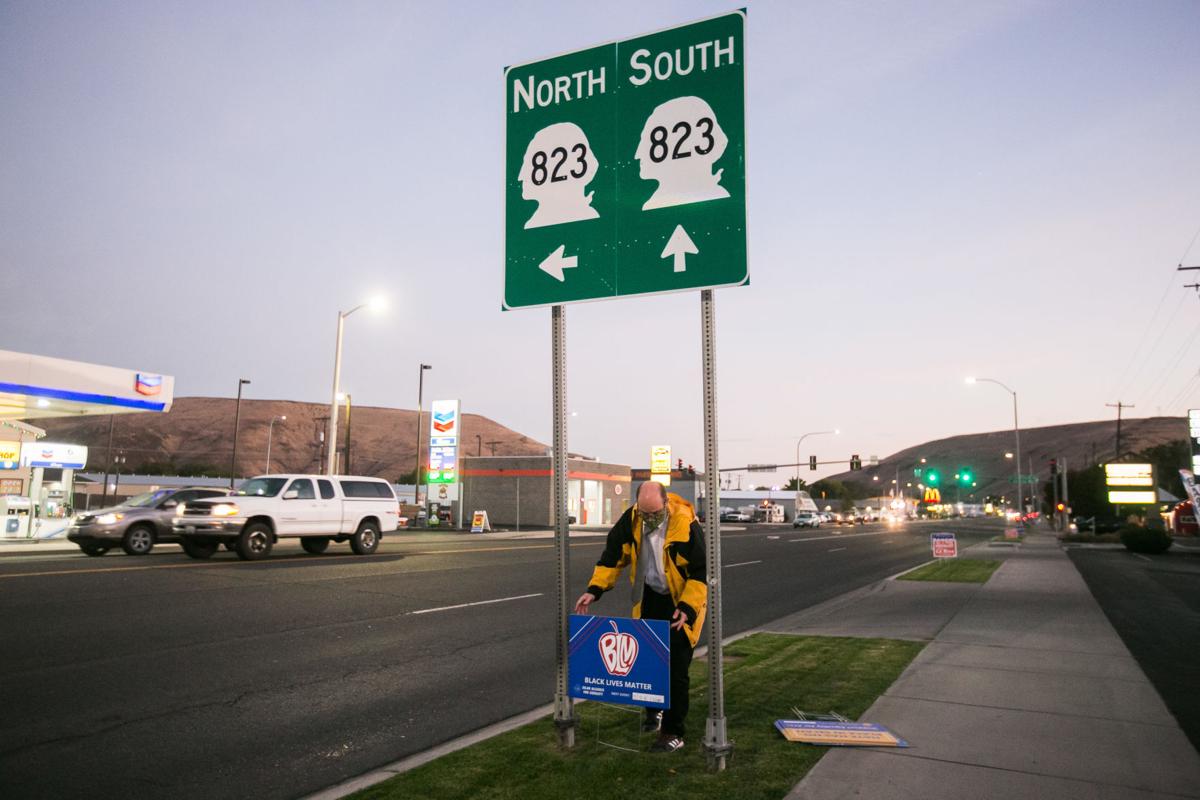 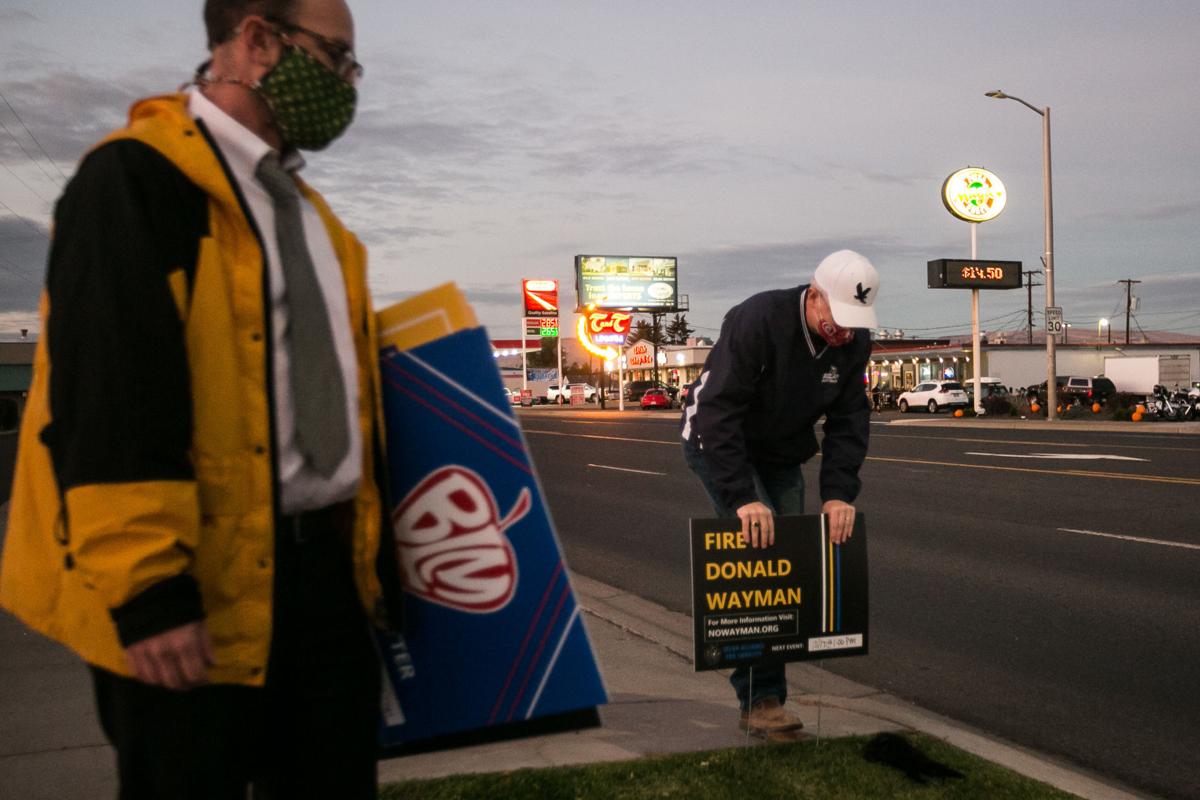 In this photo taken on Thursday, Oct. 15, 2020, Lester Callahan, right, places a Selah Alliance for Equality sign in the ground with Aaron Case, left, along South First Street in Selah, Wash. 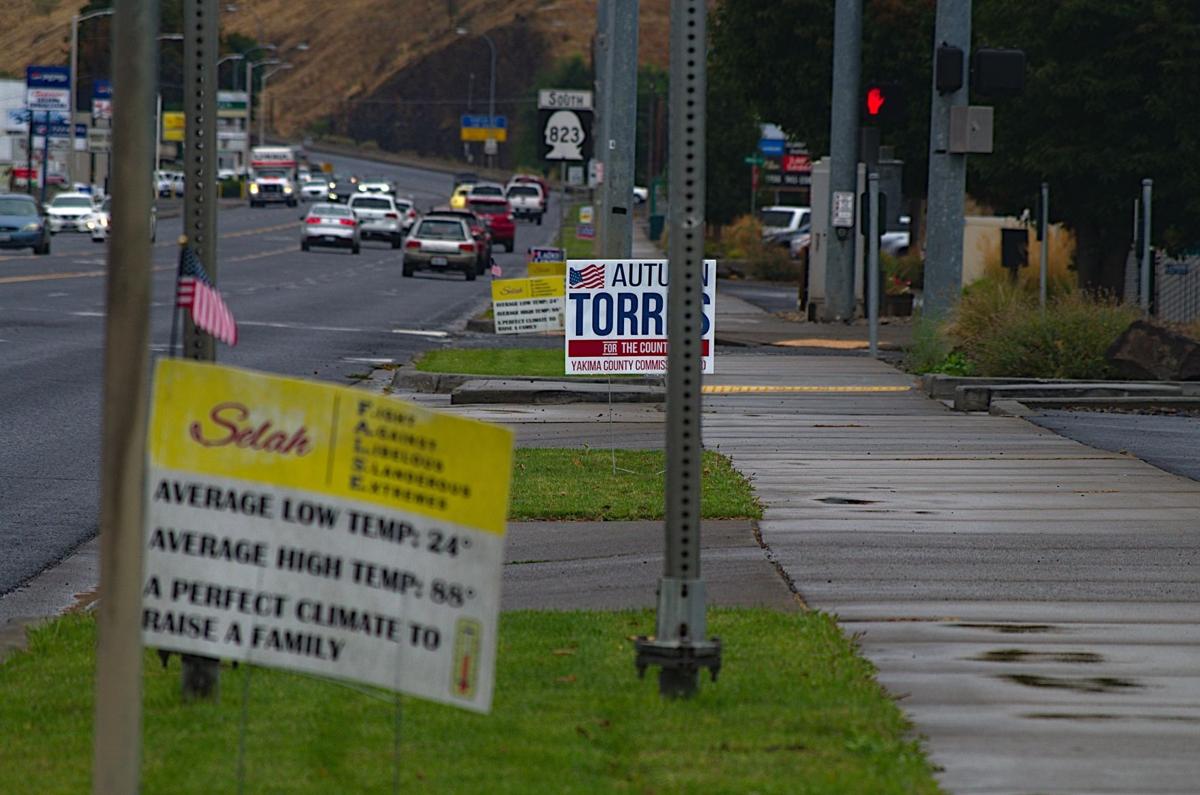 In this photo taken on Thursday, Oct. 15, 2020, Lester Callahan, right, places a Selah Alliance for Equality sign in the ground with Aaron Case, left, along South First Street in Selah, Wash.

Starting in December, free-standing signs will be allowed on Selah’s main drags, regardless of message.

City Attorney D.R. “Rob” Case said the new ordinance was needed in part to settle a federal lawsuit filed by a Selah racial-equality group who said the city was removing their signs because of their message.

“A new, valid sign code is one of the conditions the plaintiff’s lawyers are asking for,” Case said. “So we need a new sign code. Whether it is this version or some other version, we need one.”

The city’s previous sign ordinance only allowed political campaign signs to be displayed along the rights of way on First Street without permits.

Joseph Cutler, SAFE’s attorney, said in an earlier interview that the lawsuit was not so much about signs as fostering a culture where people are treated equally.

In June, U.S. District Judge Rosanna Malouf Peterson ordered the city to not enforce portions of the ordinance.

Case said the new ordinance was the result of work with the city’s Planning Commission, attorneys for SAFE and the American Civil Liberties Union and the council, with the most recent review being at a work session two weeks earlier.

Several amendments were made to the final ordinance, including extending the area where small, free-standing signs could be posted without permits. In more recent drafts of the ordinance, the signs were restricted to the grass strip on South First Street, but the amendment opened the rights of way along North and South First streets, as well as Jim Clements Way and North Wenas Road.

It also requires the signs’ owners to take them down before city crews mow the strips. If they don’t, city crews can remove them and hold them for up to two weeks for the owners to claim.

The ordinance was also amended to allow people to carry signs in residential areas, where they had been barred. Council member Suzanne Vargas said that would respect First Amendment rights, especially when the city cannot bar people from protesting in those areas.

“My concern is someone could make any sign they want and go up and down outside the resident’s (home) and name the resident with whatever caricature they want to say, and we have nothing to stop that from happening,” Wickenhagen said.

Vargas said there are already laws governing disorderly conduct and failure to disperse that could address concerns about rowdy demonstrations.

The controversy began in June 2020 following a Black Lives Matter demonstration in Selah where Wayman disparaged the anti-police-brutality movement and subsequently directed city crews to remove chalk art and signs supporting the movement and calling for his ouster.

Wayman was fired May 25, but Raymond has refused to comment on the dismissal other than saying that his firing was not for cause. He has filed a claim alleging he was fired because he was investigating “unethical practices” in the police department.