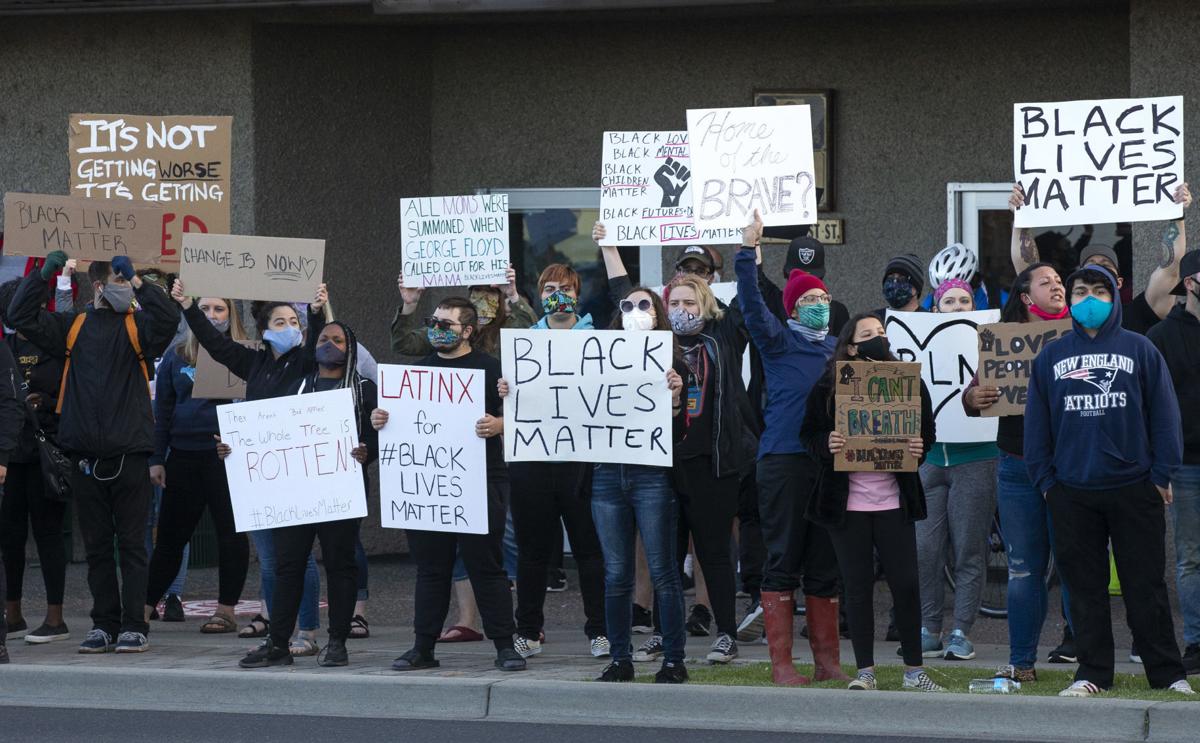 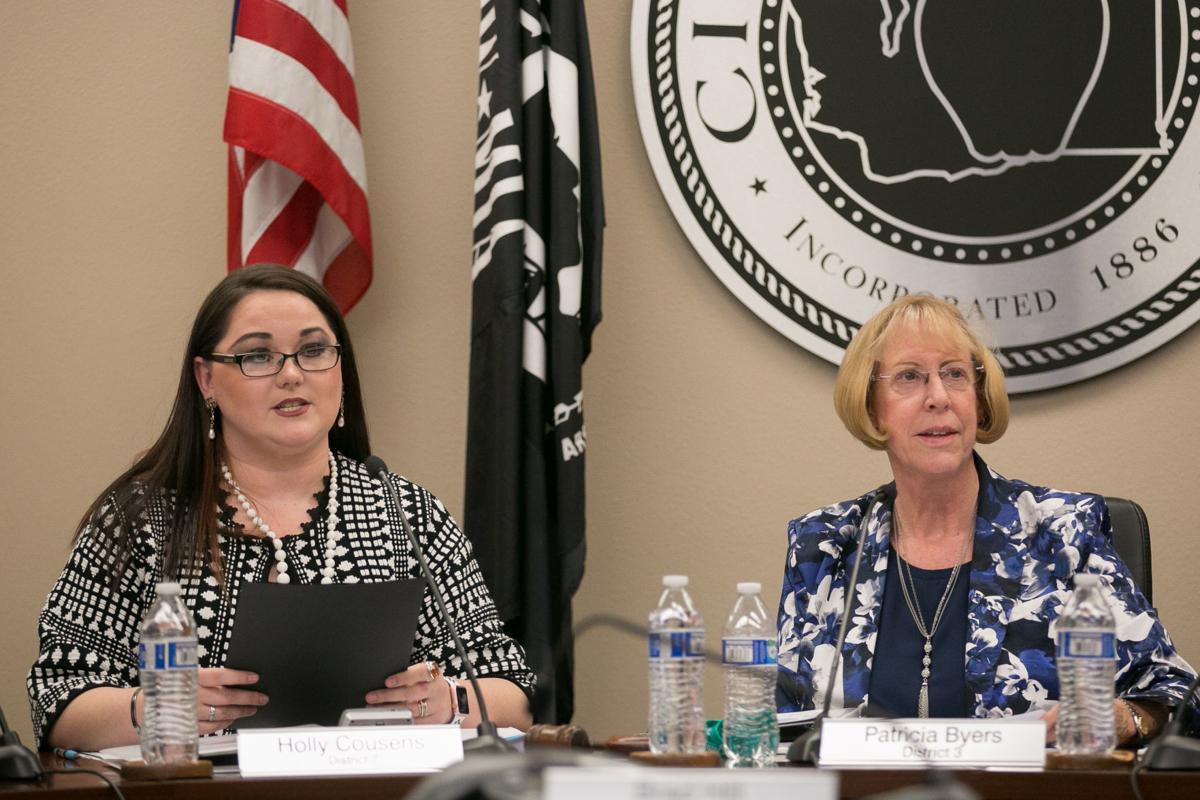 He also called the group “a neo-Marxist organization” and said the march resembled “communist indoctrination.”

In giving his report Tuesday to the City Council, Wayman said he found it “interesting” that Yakima Councilwoman Holly Cousens was observing and showing support for the protest.

“I cannot imagine the sitting members (of the Selah City Council) going to support a protest in Yakima,” Wayman said.

Cousens, who posted on Facebook that Wayman accused the protesters of engaging in “communist indoctrination” and implied that he was carrying a concealed firearm at the protest, said she was there exercising her First Amendment rights, the same as Wayman.

“I’m not after this city administrator in any way,” she said. “But it’s always been important for me to be on the right side, to stand up for people and taking care of people.”

While Wayman denied implying to Cousens that he was armed at the event, he said that he believes that Black Lives Matter is a communist organization.

More than 150 people participated in the Selah protest, walking down sidewalks from Selah High School to the Selah Civic Center to protest the death of George Floyd, who died after a Minneapolis police officer knelt on his neck for nearly nine minutes.

Ten Selah police officers — nine regular and one reserve officer — were on hand to monitor the protest, but no arrests were made, Wayman said. The officers were there to keep the protesters separated from residents he said were agitated by the demonstration.

During the event, one man was revving his engine to drown out the protesters, who only yelled louder.

Wayman, who was also there observing the event, said the only problem the city had was protesters plugging loudspeakers into outdoor power jacks at the civic center, creating noise he said was disturbing the peace.

He said the power has since been disconnected from those outlets.

Cousens said she and her stepfather attended the event, watching from across the street when a vehicle with Selah city markings on it pulled next to them. Cousens said her stepfather asked the man in the vehicle if he were a city employee, and he introduced himself as the city administrator.

Then, Cousens said she told Wayman she was the assistant mayor of Yakima, and Wayman told her that “we don’t have problems like Yakima because everybody here has a concealed” as he patted what Cousens believed was a gun under his jacket.

Wayman disputes that version of events. He recalled that Cousens asked him if he was expecting problems with the protest.

“I said the people of Selah know how to take care of themselves,” Wayman recalled. “Selah has the highest per capita concealed-carry permit.” But he said he did not pat his side when he said it.

Wayman, a retired Marine Corps colonel, said he does have a concealed pistol license and that he is a firearms expert. But he refused to say if he was carrying that night.

“It’s nobody’s business but my own,” Wayman said. “Concealed carry has a purpose that (other people) don’t know if you are carrying or not.”

Wayman said he did tell Cousens that he thought the protest, with its chants, smacked of “communist indoctrination.”

“Black Lives Matter is a neo-Marxist organization,” Wayman said. “Their slogans are based on falsehood.” He specifically pointed to the “Hands Up, Don’t Shoot” slogan, a reference to the killing of Michael Brown in Ferguson, Mo.

He also said that the chant “No Justice, No Peace,” sounds like a threat. He also said that when he and others respond to the call “Black Lives Matter” with “all lives matter,” they are branded as racists.

“I have actually saved black lives, personally, dozens if not hundreds of them,” Wayman said. “I don’t want to hear it from someone who has been trained at the knee of some neo-Marxist socialist. I know about my own decency.”

Protest organizer Courtney Hernandez said she saw Wayman outside his city vehicle, where she described him as “kind of smirking” and “trying to look intimidating.” Hernandez disputed the characterization of Black Lives Matter as “neo-Marxist,” saying the group is concerned with ending police brutality and fighting inequality, not broader political issues.

“I’m not sure where he’s getting that,” Hernandez said. “I don’t see what that has to do at all with the Black Lives Matter movement.”

Although the “Hands up, don’t shoot!” chant originated with the Michael Brown shooting in 2014, Hernandez argues it’s not meant to reference the specific incident. So even though a Justice Department investigation found Brown didn’t have his hands up when he was shot by a police officer, Hernandez said it still works as a metaphor against unnecessary police violence.

After Wayman made his remark about communists, Cousens said that her stepfather said, “Then I’m a communist,” and Wayman walked off.

Wayman said that Cousens was more than a mere observer, as she was seen talking to some of the protesters and then blowing her horn in support of them as she left.

He said a Selah council member would never go to Yakima to support a protest in that city.

Wayman attended a rally protesting Gov. Jay Inslee’s stay-home orders at the Yakima Speedway in May. Wayman said that was different because it was on private property with the invitation of the owner, and he was just there to observe and didn’t agree with everything that was said.

In a follow-up phone interview on Wednesday, Cousens said she has been vocal of her support of the Black Lives Matter movement given her family’s history with civil rights and her own experiences as a Jewish woman.

Cousens, who was born in Pensacola, Fla., said her parents marched with Martin Luther King Jr. during the Civil Rights Movement.

She grew up hearing stories of Emmett Till, a 14-year-old African American lynched in 1955 in Mississippi after being accused of offending a white woman in her family’s grocery store. Cousens’ godmother — who died last year — was black.

Cousens said her identity as an Ashkenazi Jew also has given her a unique perspective into racism, which she said she’s experienced firsthand. Members of the Ku Klux Klan burned a cross in her yard when she was growing up, Cousens said.

“Racism isn’t new to me,” she said. “But when you see something, you have to say something. We’re all human. I don’t care what side you believe, but have some compassion.”

Hernandez said she’s never spoken to Wayman, but a Selah City Council member made a more positive impression at Saturday’s march. Hernandez sent Clifford Peterson an email on Wednesday after she said he approached her to respectfully ask questions about why the group decided to march and whether racism in Selah needs to be addressed.

Another protest in Selah is scheduled for 7 p.m. Thursday. Hernandez said she’s received plenty of positive support through personal messages and the Facebook group she created, “We Care About Black Lives-Yakima Valley.”

More than 40 people returned to the Selah Civic Center on Thursday night for another demonstration against racism and police brutality.