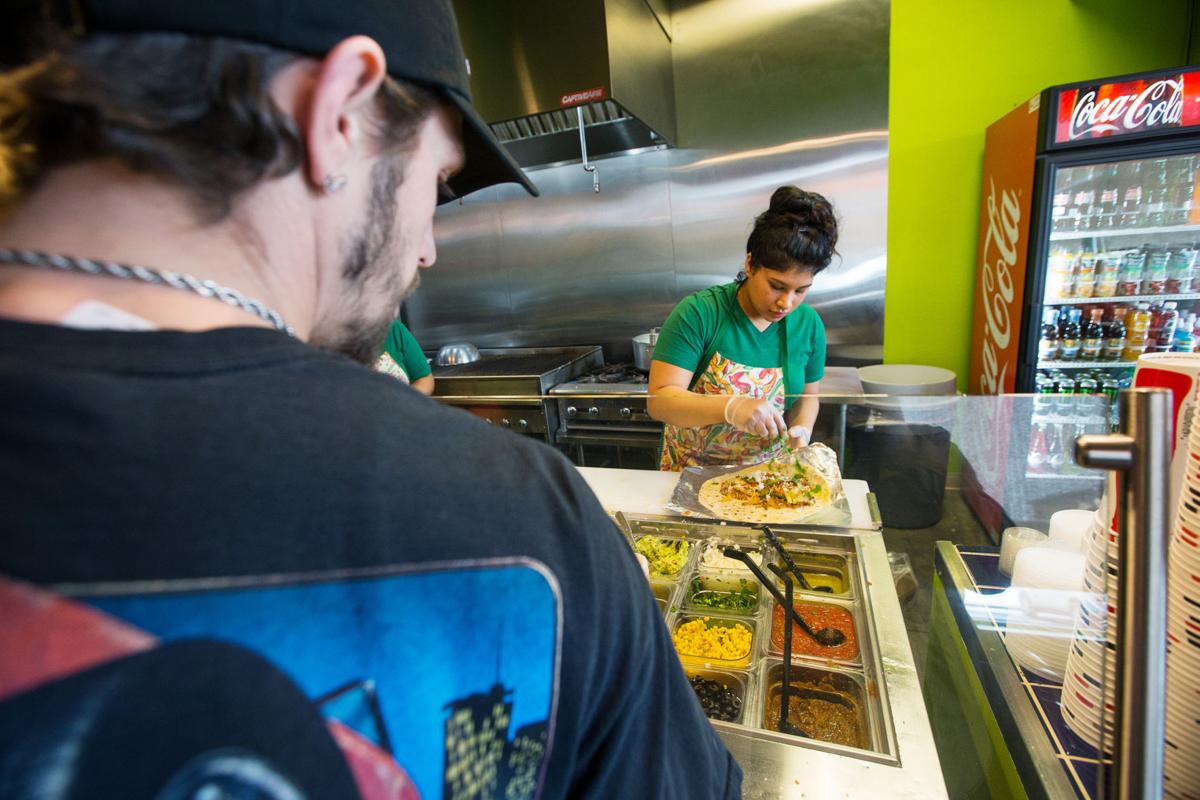 Norma Barrera makes a lunch item for a customer at Nino’s Mexican Grill in Yakima, Wash., Friday, Jan. 27, 2017. The family operation opened in 2013 and hoping to someday become a franchise. (SHAWN GUST/Yakima Herald-Republic) 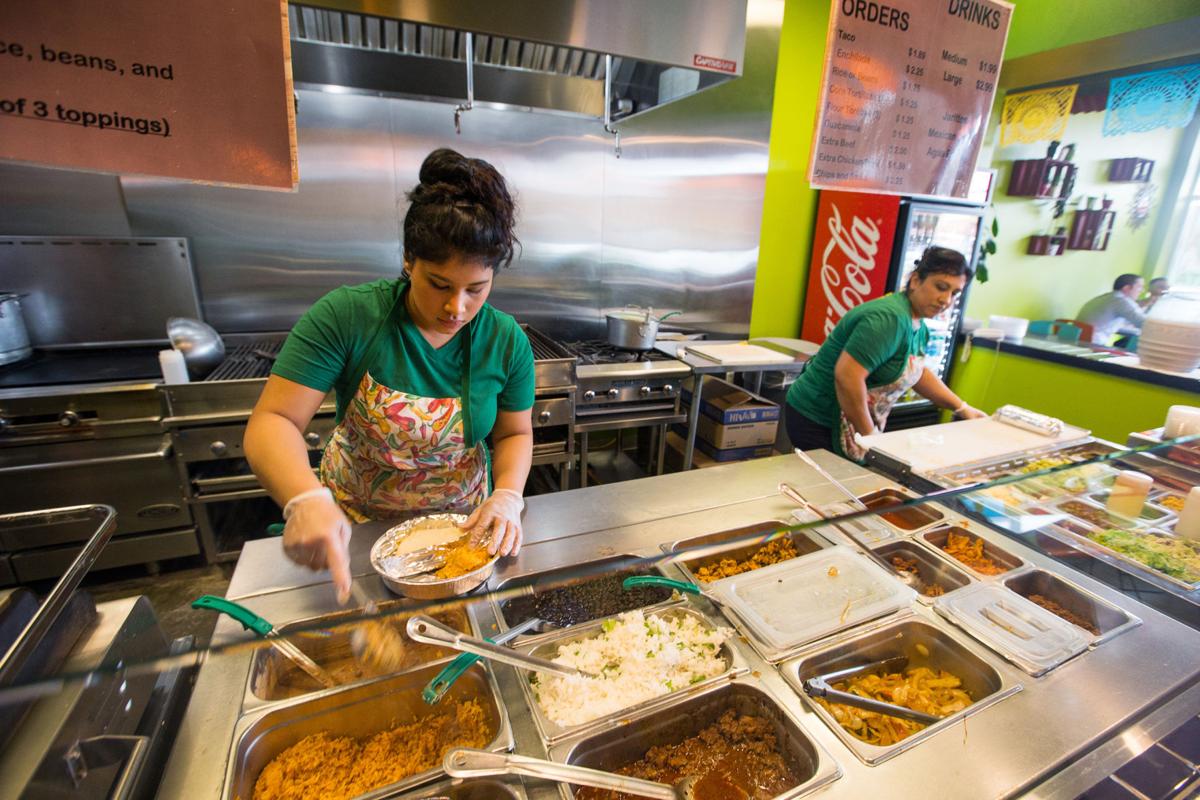 Norma Barrera and her mother Claudia Navarro do most of the cooking at Nino’s Mexican Grill in Yakima, Wash., Friday, Jan. 27, 2017. The family operation opened in 2013 and hoping to someday become a franchise. (SHAWN GUST/Yakima Herald-Republic) 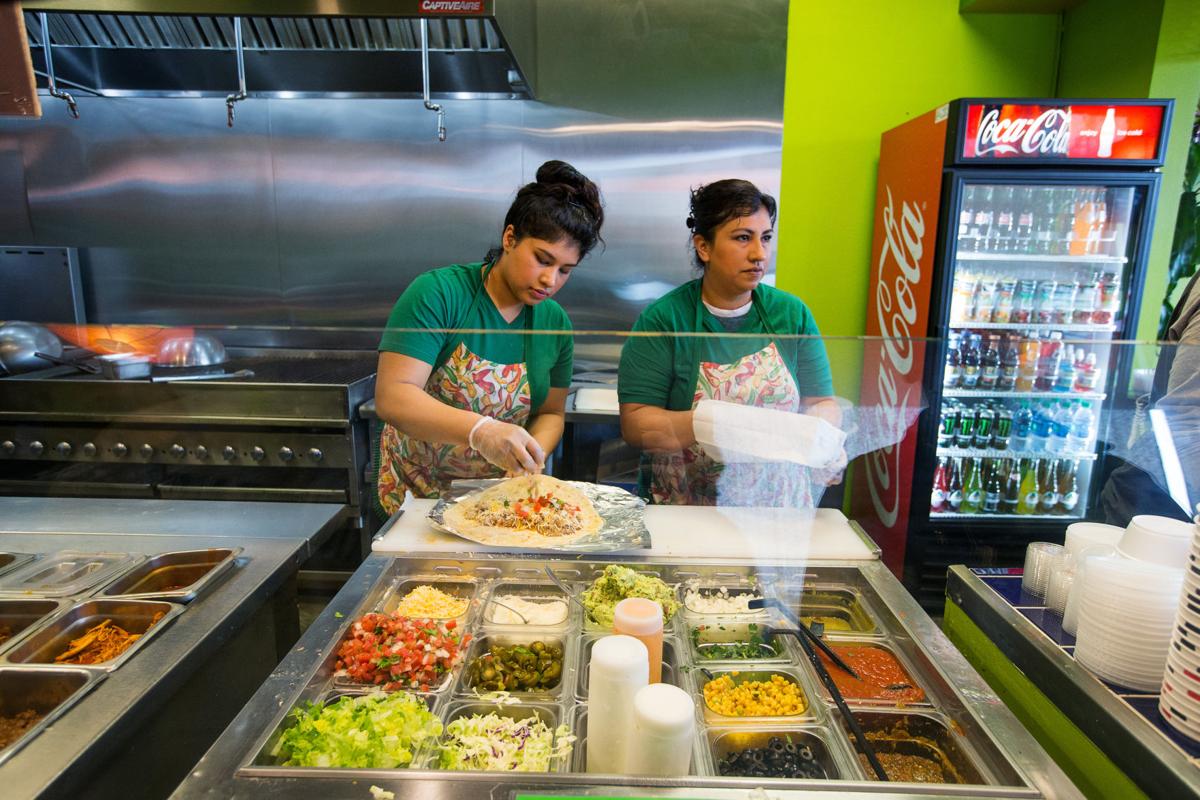 Norma Barrera, left, and her mother Claudia Navarro do most of the cooking at Nino’s Mexican Grill in Yakima, Wash., Friday, Jan. 27, 2017. The family operation opened in 2013 and hoping to someday become a franchise. (SHAWN GUST/Yakima Herald-Republic)

Norma Barrera makes a lunch item for a customer at Nino’s Mexican Grill in Yakima, Wash., Friday, Jan. 27, 2017. The family operation opened in 2013 and hoping to someday become a franchise. (SHAWN GUST/Yakima Herald-Republic)

Norma Barrera and her mother Claudia Navarro do most of the cooking at Nino’s Mexican Grill in Yakima, Wash., Friday, Jan. 27, 2017. The family operation opened in 2013 and hoping to someday become a franchise. (SHAWN GUST/Yakima Herald-Republic)

Norma Barrera, left, and her mother Claudia Navarro do most of the cooking at Nino’s Mexican Grill in Yakima, Wash., Friday, Jan. 27, 2017. The family operation opened in 2013 and hoping to someday become a franchise. (SHAWN GUST/Yakima Herald-Republic)

UNION GAP, Wash. -- Through it all — washing dishes in a chain restaurant, harvesting vegetables in California fields, baby-sitting, catering — she never took her eye off the prize.

Claudia Navarro had long strived to own a restaurant. In 2013, she achieved that goal, opening Nino’s in Union Gap, a small, lively spot redolent with meat grilling, beans simmering, and cilantro and garlic mingling in the air. The restaurant attracts a devoted cadre of customers, who choose their selections by angling along a counter and pointing out entrees and condiments to build their meal.

Want the Monster Burrito? Most people do. Fill a homemade tortilla with rice, beans, meat, plus toppings, and the challenge is on to try to finish it.

Before Nino’s (it’s the nickname of Claudia’s husband, Joel Navarro) opened three and a half years ago, a concrete concept began developing in Claudia’s mind.

“She always wanted something for us kids,” explained Norma Barrera, at 21 Claudia’s oldest child, who helps manage the restaurant.

Living in Anaheim, Calif., for many years, Claudia put the idea of opening a restaurant on the back burner while she worked a number of jobs: dishwasher, farm worker, baby sitter and caterer.

“But she was always doing something with food,” Norma noted.

Then eight years ago, the family moved to the Valley (Joel grew up in Wapato), and that’s when Claudia got serious about fulfilling her dream. First, she held a series of yard sales, putting those earnings, plus savings from various jobs, toward purchasing restaurant equipment.

After two years, Claudia had enough money to buy a stove. After that, bit by bit, she accrued what she needed to furnish a kitchen.

“We looked like ants, coming in with one thing at a time,” Norma recalled.

After they found a spot to rent, Joel began remodeling and painting the space, then building 10 wood tables. Claudia took out a $5,000 loan to stock the kitchen with food, a loan she’s already repaid.

When opening day arrived, Claudia was nervous. “It was scary,” she said in Spanish, as Norma interpreted. “I just hoped people would like our food.”

Averaging about 200 customers a day, Nino’s is usually busiest during lunch. Summer and fall bring in the biggest crowds, sometimes 350 people a day. “We run out of tables,” Norma said. She remembers a day early on when the line of customers stretched from outside the front door to the back of the restaurant, then wound around again to the counter.

The goal for the first year was simple: Get the Nino’s name out and build a reputation. Now, nearly four years in, they seem to have done both.

“It’s my favorite place,” said John Gonzalez, who lives in West Valley. “Sometimes I come twice a day.” He favors the Nino’s Bowl — rice, beans, meat and toppings, served with tortillas — as well as what he says are reasonable prices.

Almost everything is homemade from Claudia’s recipes: flour and corn tortillas, meats, sauteed vegetables, salsa, beans and condiments (except for cheese, sour cream and olives). The day begins early: Claudia is often at the restaurant by 6 a.m., chopping, simmering, rolling dough. Since they don’t use a freezer, every morning she and Norma shop at the nearby Cash & Carry grocery to buy fresh vegetables and meats.

Regular customers know what they like, Norma noted, and the family, in turn, knows what they’re going to order.

“We each have about 10 regulars that we know when they come in what they want, and we start fixing it,” she explained.

The Monster Burrito is the most popular item. “People like fresca — fresh,” Norma said.

Other favorites include the chicken and steak marinated overnight, then fire-grilled. The marinade, which has 25 ingredients, is a family secret, Norma said. “It took my Dad four years to come up with it.”

Because Claudia remembers how much it stretched the budget to go out to eat when her children were little, she said she’s committed to keeping the cost of selections low.

“We try to give good prices so it’s not super expensive for a family,” Norma explained. “We’re not going to steal from people. A large family can come in and eat for much less than $50.”

They’ve recently added a special to the menu, a meat, bean and cheese burrito with chips and salsa for $5. They’re also planning to introduce fish tacos and shrimp fajitas.

But their plans don’t stop there. Dovetailing on her mother’s dream, Norma, who is taking business classes at Yakima Valley College, has her eye on expansion. She’d like to open a satellite in West Valley and more spots after that.

“We won’t stop. We want to be the best Mexican restaurant in town, and we want to franchise,” Norma said.

Each month, the Yakima Herald-Republic profiles an entrepreneur behind a successful business. The profiles continue an April 2011 project titled Yakima Valley Risk Takers, which told the stories of scores of local business owners.

as well as other Mexican dishes

Tortas and quesadillas cost less than $6; the signature Monster Burrito is $6.45; carne asada is $9.25. There’s also a children’s menu.