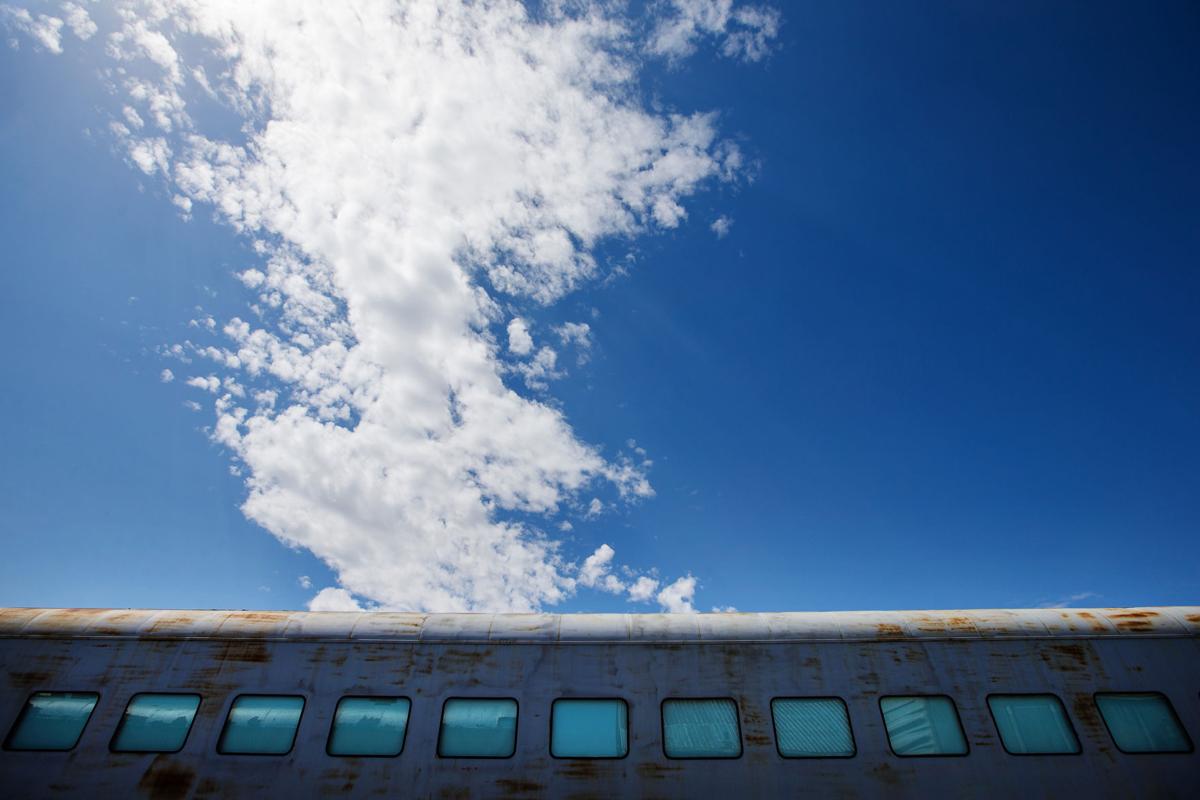 An old passenger car is photographed at the Northern Pacific Railway Museum in Toppenish, Wash. on Wednesday, May 18, 2016. Rail advocates’ goal of bringing passenger trains back through the Yakima Valley is still a long way off, with no cost or time estimates in sight. Still, advocates are encouraged by renewed interest among local businesses and government. (SHAWN GUST/Yakima Herald-Republic) 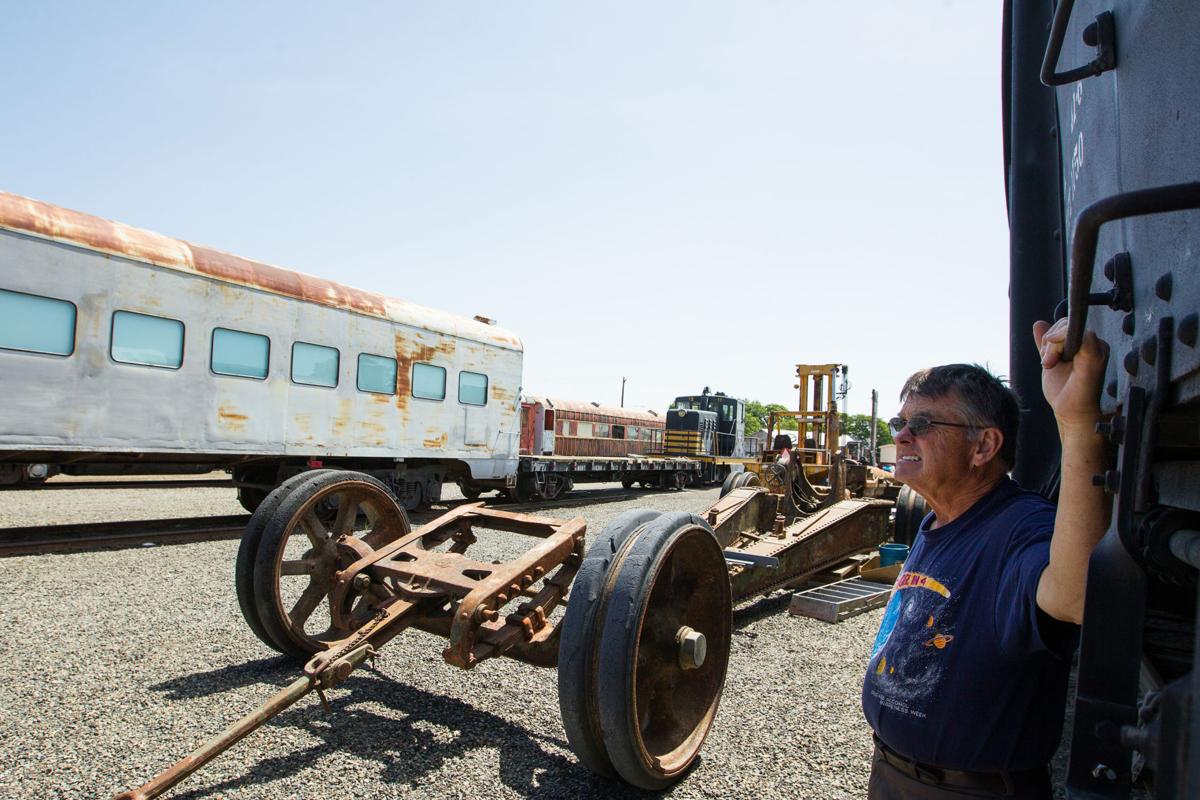 Roger O’Dell, president of the Northern Pacific Railway Museum, looks at an old passenger car at the museum in Toppenish, Wash. on Wednesday, May 18, 2016. (SHAWN GUST/Yakima Herald-Republic) 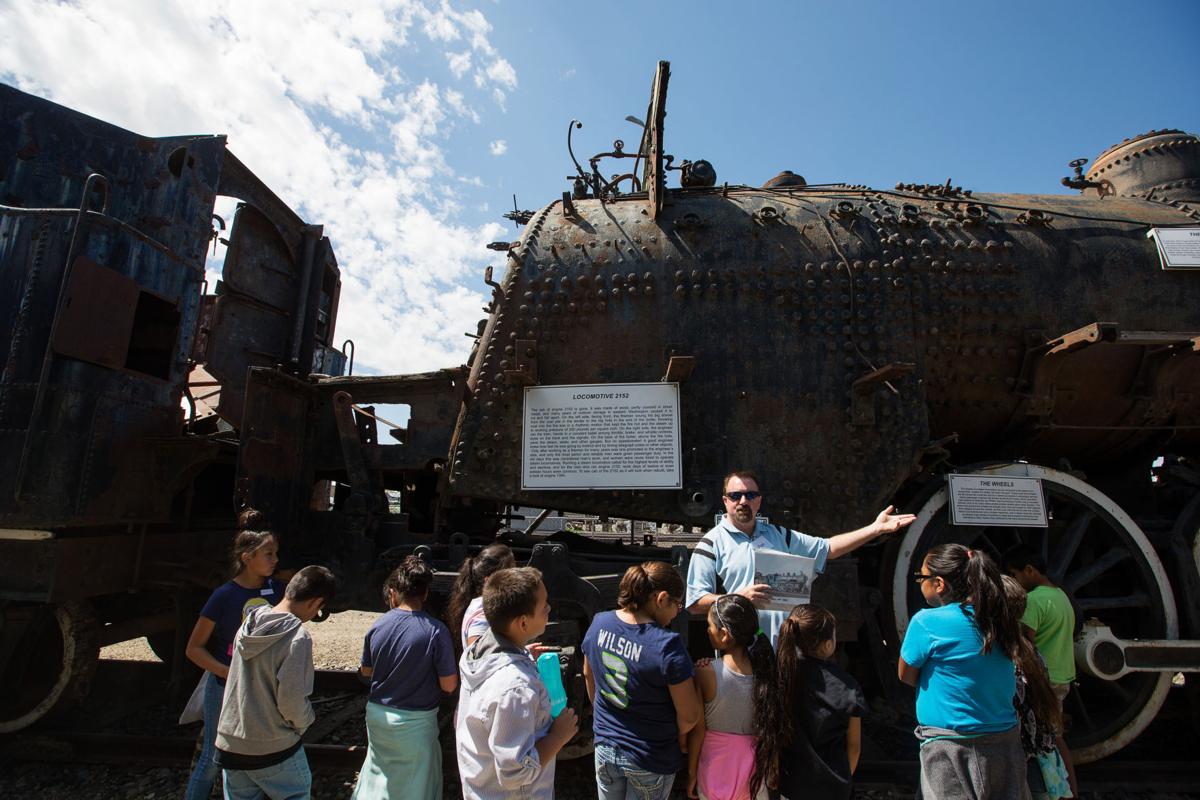 Volunteer Don Norman talks to a group of second-graders about a steam-powered engine during a tour of the Northern Pacific Railway Museum in Toppenish, Wash. on Wednesday, May 18, 2016. (SHAWN GUST/Yakima Herald-Republic)

An old passenger car is photographed at the Northern Pacific Railway Museum in Toppenish, Wash. on Wednesday, May 18, 2016. Rail advocates’ goal of bringing passenger trains back through the Yakima Valley is still a long way off, with no cost or time estimates in sight. Still, advocates are encouraged by renewed interest among local businesses and government. (SHAWN GUST/Yakima Herald-Republic)

Roger O’Dell, president of the Northern Pacific Railway Museum, looks at an old passenger car at the museum in Toppenish, Wash. on Wednesday, May 18, 2016. (SHAWN GUST/Yakima Herald-Republic)

Volunteer Don Norman talks to a group of second-graders about a steam-powered engine during a tour of the Northern Pacific Railway Museum in Toppenish, Wash. on Wednesday, May 18, 2016. (SHAWN GUST/Yakima Herald-Republic)

YAKIMA, Wash. -- Economic development, increased tourism, safer passage over the mountains — advocates of train travel have a host of reasons why passenger rail service should be restored to the Yakima Valley after more than 30 years without it.

At this point, though, that enthusiasm is about all they have.

“This isn’t going to come fast or easy, getting the rail over here,” said Lloyd Flem, longtime executive director of Seattle-based All Aboard Washington, a nonprofit organization that advocates for improved rail transportation. “There’s various kinds of hurdles. But the hurdles can be overcome by a lot of pressure and work, primarily from the people in the Valley that want it to happen.”

To that aim, All Aboard held a meeting last Saturday in Toppenish, where about 75 local residents, business owners and legislators showed up at the Northern Pacific Railway Museum to discuss options.

The goal is to someday re-open passenger service from Auburn to Pasco, going over Stampede Pass south of Snoqualmie. Trains would stop along the way in Cle Elum, Ellensburg, Yakima and Toppenish.

Most of the rail lines currently in use in Washington state are owned by BNSF Railway, which uses the Stampede Pass line for freight.

Passenger service run by Amtrak is available on BNSF lines reaching Seattle, Tacoma, the Tri-Cities and Spokane, with more stops in between, especially along the I-5 corridor.

The Empire Builder route, which extends all the way to Chicago, goes through Spokane and Wenatchee on its way to Everett and Seattle in the north, and from Spokane to the Tri-Cities and along the Columbia River Gorge en route to Portland in the south.

But passenger trains have not stopped in Yakima since 1981.

“The Yakima Valley has the most population of anything in the Pacific Northwest with no regular passenger train service,” Flem said, adding it’s “conspicuous in its absence.”

The main barriers, of course, are tied to cost: First to have the money to make necessary changes to the freight-only line, assuming BNSF agrees to open its rails back up for passenger service; and then to come up with money to sustain service over time.

Advocates’ main argument for bringing service back is that it would boost tourism on both sides of the mountains.

He listed the town’s rail museum as a likely beneficiary of increased tourism, along with Valley hotels, wineries and microbreweries and any small businesses that would pop up to accommodate and entertain travelers.

“It’ll be an opportunity for people to come to Toppenish, see our murals, do our tourist activities here and spend the weekend in the casino, and hopefully say, ‘We didn’t have time to see everything; we want to come back,’” Hoyt said.

Tourism would go the opposite direction, too, he said: Travelers could visit family on the west side of the state more easily if they didn’t have to worry about bad weather on the mountain passes, or perhaps take a day trip to see a Mariners game.

Trains could also serve commuters, such as students from throughout the Valley who attend Central Washington University, or people who live in Cle Elum and work in the Seattle area.

“This is one of those things — it’s not just a Toppenish positive,” he said.

As the project is “very fledgling at this point,” Hoyt could not offer any specific numbers of what Toppenish might be willing to invest to make rail service actually happen.

“We know that yes, you have to put money in the pot to make projects grow; we’re not to the point where we know how much that is,” he said.

Investment from local businesses and communities probably would be necessary to some degree, as it’s questionable whether there’s enough demand for the Valley rail service to be self-sustaining.

Roughly half a million people live along the line from Cle Elum to Pasco, and that’s within range of the hypothetical passenger service, said Jon Smith, president of New Vision. He attended Saturday’s meeting and came away with a lot of questions.

“Of that half a million people, how many of them does it take to be what you would consider a regular rider? Or what’s the number of people you would need on trains? Then also, what’s the price point for tickets back and forth, and how does that compare to what people are paying now for whatever their travel mode is?” he said. “There’s just a lot of things that go into opening up a new mode of transportation.”

A feasibility study would be the first practical step, looking at how towns similar to Yakima have benefited from and supported rail service, Smith said.

Flem said that for now, they’re setting up a working group with public and private stakeholders from Central Washington, although members have not been finalized. Their first meeting should be sometime in the next month.

The working group would be responsible for requesting and funding a feasibility study, but it’s too early to have details on how or when that could happen, Flem said.

“We’ve just discerned that there is sufficient interest in the Valley,” he said.

But he hopes the study would happen before the end of this year so it can be used to direct future hopes for local rail service.

“I think it’s a relative — I won’t call it a long shot, but it’s going to take a lot of things to line up to make that happen in the near future,” said state Sen. Curtis King, R-Yakima, who attended the All Aboard meeting and is chairman of the state Senate Transportation Committee. Supporters will have to convince the Legislature to help, he said, and convince BNSF to open Stampede Pass, and convince businesses on the east side of the state of the benefits.

“In terms of Stampede Pass, the line is not designed for passenger operations,” he said. “The track would need significant modifications to accommodate passengers,” along with stations and platforms, he said.

He said the company couldn’t speak to overall viability until there was a specific proposal from Amtrak, which would be the entity providing passenger service.

To achieve any kind of lasting demand, passenger rail travel has to be seen as a reliable alternative to driving.

“If it takes you six hours to get over there from Yakima, I don’t think a lot of people are going to do it,” King said. “It’s gotta be timely, it’s gotta be efficient, and it’s gotta be at a cost that people can afford, so there’s lots of challenges.”

He plans to talk to BNSF about it, but because the company owns the rails, “They have a lot more power than we do.”

It would probably be around a decade before any improvements could be made, he said, if all parties can work together.

As for any financial help from the Legislature, King said he included $50 million in his first proposed transportation package in 2013 to work on increasing the height of the tunnels, but BNSF was not interested at the time and the money was cut from the final budget.

“There wasn’t any reason to do it if Burlington Northern wasn’t interested in using it and opening up Stampede Pass,” King said. “We were trying to give them a little incentive and it didn’t do any good.”

While Flem is first to acknowledge that Yakima Valley rail service is years away, he was encouraged by the turnout and excitement at that meeting in Toppenish.

“This was a good start, Saturday — having community leaders and business people from up and down the Valley all there, and all applauding at the right times,” he said.

There’s lots of passenger trains on the west side, he said.