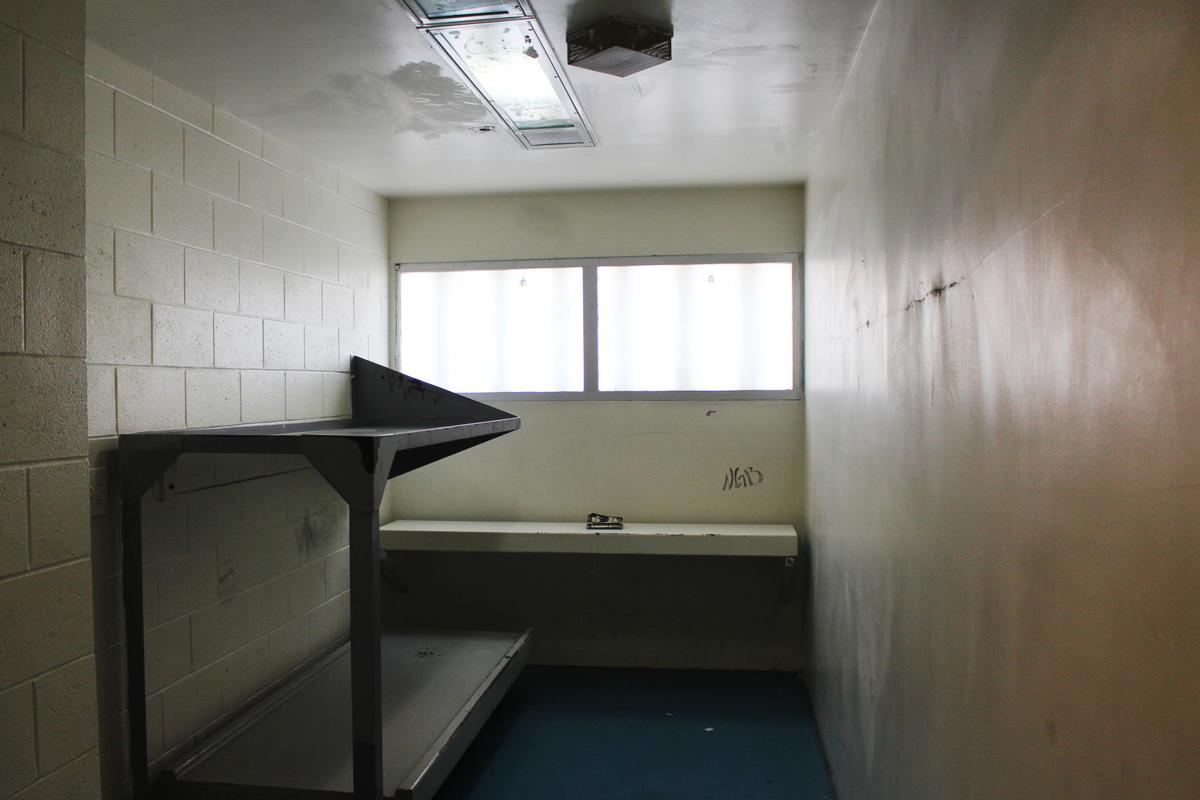 The inside of a two-person cell in the medical unit, used for people who are housed in solitary confinement away from the general population at the Yakima County Jail. (MICHELLE IRACHETA/Yakima Herald-Republic) 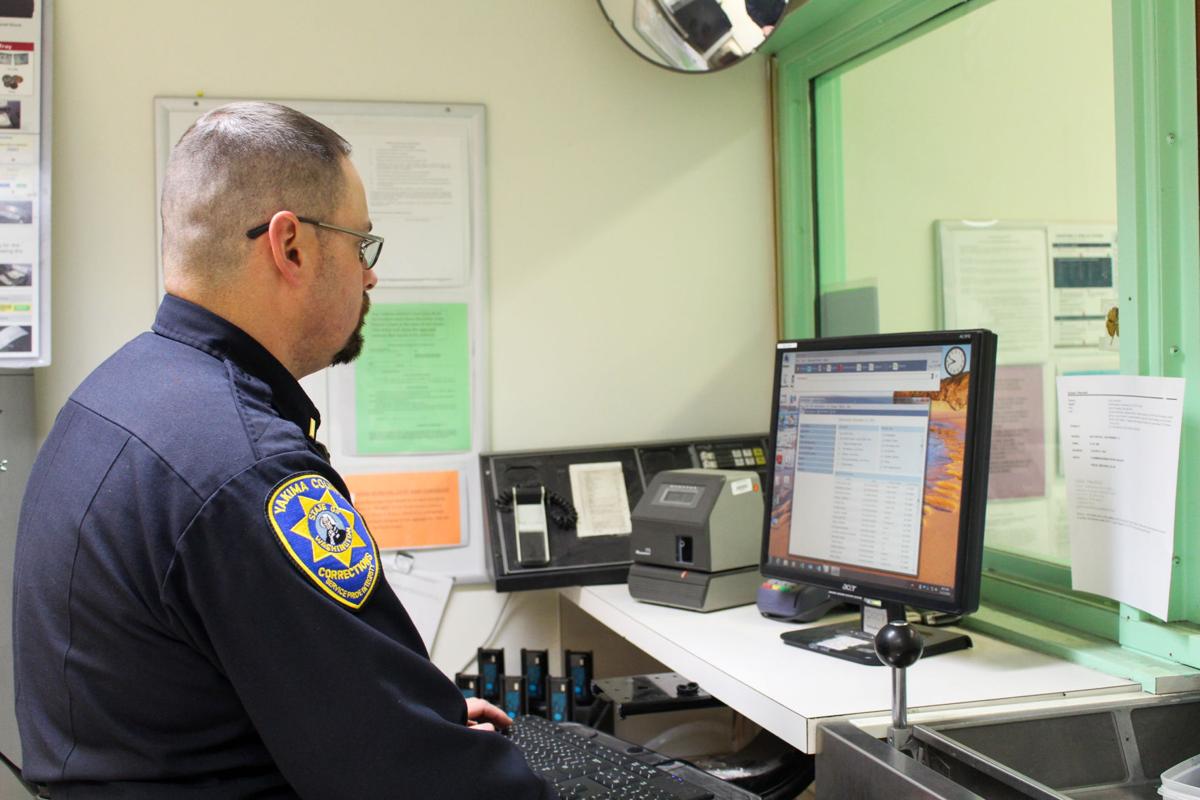 Lt. Jeremy Welch sits in front of a computer showing various reports and explains why corrections officers file one every time an inmate is sent to solitary confinement. (MICHELLE IRACHETA/Yakima Herald-Republic)

The inside of a two-person cell in the medical unit, used for people who are housed in solitary confinement away from the general population at the Yakima County Jail. (MICHELLE IRACHETA/Yakima Herald-Republic)

Lt. Jeremy Welch sits in front of a computer showing various reports and explains why corrections officers file one every time an inmate is sent to solitary confinement. (MICHELLE IRACHETA/Yakima Herald-Republic)

On the second floor of the Yakima County jail, several women are kept in special housing segregated from most of the jail’s prisoners.

Every day, each woman — one-by-one — takes a turn exiting her 6-by-8-foot cell in the jail’s “G-unit” and is let into a larger “day” room for just two hours. Once outside, the inmates are allowed to talk to their attorneys or families, go into “yard,” shower, watch TV or just enjoy being outside the confinement of their small cells.

But aside from that two hours, the women and other inmates in the jail’s solitary confinement unit will not have any meaningful human interactions or see anyone other than the occasional guard who checks on them every 29 minutes.

Solitary confinement can be detrimental to an inmate’s mental health and could cause devastating lifelong psychological effects, especially if an inmate is suffering from a mental illness or a disability. And, disability rights advocates say, the Yakima County jail, which houses roughly 13 percent of its about 900 inmates in solitary confinement, could be subject to costly litigation for violating inmates’ constitutional rights and discriminating against them based solely on their disability.

A report released Thursday by Disability Rights Washington, a nonprofit advocacy group advocating for the rights of people with disabilities, says the state’s county jails — including Yakima’s — are placing inmates with mental illnesses and disabilities such as brain injuries, cognitive disabilities and other types of disabilities in solitary confinement as a result of their disability.

At Yakima County jail, inmates placed into special housing — a term used by the jail in lieu…

“Many county jails discriminate against inmates with disabilities by placing them in solitary confinement due explicitly to their disability or for reasons clearly related to that disability,” said Kayley Bebber, a Disability Rights Washington staff attorney, in the report titled, “Cruel but not Unusual: Solitary Confinement in Washington’s jails.”

Yakima County jail officials are aware of issues and concerns with housing disabled and other inmates in solitary confinement but say they have taken steps, such as new intake assessments and transitional housing, to address concerns. Inmates most often are put in the unit due to behavioral, health and safety issues — not solely because of a disability, they say.

“It’s their behavior that chooses where they go, not their mental illness,” said Lt. Jeremy Welch, Yakima County Department of Corrections spokesman. “So if they are acting out, yes, they might end up in special housing or administrative segregation.”

In January, President Barack Obama banned the use of solitary confinement for juveniles in federal prison and requested that jails and prisons expand treatment for the mentally ill. He also said jails should increase the amount of time inmates spend outside of their cells while in solitary confinement.

But the jail does not have a therapeutic mental health unit, a place for those with mental illness to reside instead of solitary confinement, said Kayley Bebber, a Disability Rights Washington staff attorney,

Aside from the two hours each day outside their cell, inmates have no human contact, which can be debilitating to those suffering from mental illness often exacerbating their symptoms. Prolonged confinement can lead to additional psychological effects such as anxiety, depression, diminished impulse control, paranoia, visual and auditory hallucinations, post-traumatic stress disorder and psychosis, according to the Disability Rights Washington report.

“Jails are not designed to be mental health facilities,” said Bebber, who has been investigating Yakima County Jail conditions for people with disabilities, especially those with mental illness, since May.

Bebber, whose team has completed follow-up monitoring and inmate record reviews at the jail, said the practice, which begins when a person is booked into jail, would constitute as disability discrimination and would be in violation of the Americans with Disabilities Act as well as the Eighth and 14th Amendments of the U.S. Constitution.

According to the report, “under the Eighth and 14th Amendments to the United States Constitution, jails must refrain from keeping inmates with serious mental illness in conditions of confinement that risk or cause serious harm.”

Of the 121 inmates within the Yakima jail’s special housing unit, about two dozen are being treated for mental health illnesses while they await trial or serve their sentence, Welch said.

The quick interview is a precursor to determining whether an inmate will end up in solitary confinement or general population but it’s not the only determination, Welch said. An inmate’s behavior — aggression or acting out — is a key part of making the determination.

“Acting out” can include a variety of behaviors such as showing aggression toward other inmates, yelling and screaming, threatening others, or showing that an inmate could attack someone, including guards. Welch called placing inmates in solitary confinement a risk analysis that includes considering the safety of not only the individual in question but also other inmates and jail staff.

There are other reasons — breaking the rules, being in protective custody, needing to be medically isolated or being high risk to the general population — that can lead to an inmate being placed into solitary confinement.

“There is a huge spectrum for what can be happening,” Welch said. “You can have the (inmate) who is completely cooperative, does everything great, complying with everything, does all the programming and is a 100-percent success. But then you got the one who is aggressive and who is going to do nothing but fight with everybody and we have to try to figure out how to manage that. How can we give them the treatment and still be safe about it?”

Another recent change the jail has made to reform its solitary confinement policies, is to add a transitional unit for those with mental illness and medical conditions, Welch said. The unit is for individuals who have graduated from solitary confinement and are ready to be placed in a small group of people prior to being released into the general population, Welch said.

Putting inmates with disabilities in solitary confinement simply because of their disability not only violates the U.S. Constitution but also could potentially place them in hazardous conditions because cells may not be equipped for their disability, Bebber said.

Bebber’s focus, after visiting Yakima County Jail, is getting inmates more appropriate housing and better treatment options, an aspect she says the facility is lacking. After a visit to 39 state jails, Bebber recommended that Yakima County Jail as well as other state jails screen inmates for contraindications to solitary confinement, a process designed to identify whether there are reasons why an individual should not be placed in solitary confinement.

On Friday, Bebber said Disability Rights Washington and Yakima County jail had entered into an agreement, which would provide a road map for the jail “to discuss all of the concerns we raised and to build solutions.”

“It is a formal commitment from both sides to spend the time necessary to come up with thoughtful, sustainable fixes that work for both the jail and the people they serve,” she said.

Although Yakima County jail corrections officers ask inmates a series of questions, it does not screen inmates for contraindications to solitary confinement or look for alternatives for those with mental illness, cognitive disabilities and medical issues, Bebber said.

Bebber earlier had said that efforts such as the jail’s new assessment form might be too little, too late.

“Based on our investigation, we do not believe that the changes the jail communicated to (the Yakima Herald-Republic) have been implemented or are farther along than very nascent stages,” Bebber said in an email. “Rather, we continue to be concerned about serious violations of the rights of inmates incarcerated at Yakima County Jail, under the U.S. Constitution and ADA.”

The organization’s investigation into Yakima County jail also revealed inmates with mental illnesses and disabilities are still restricted from participating in group activities and programs, counseling, or religious services, she said. Per the ADA, people with disabilities should not be denied participation in activities or programs because of their disability.

Welch, however, maintains those inmates are not restricted from participating because of a disability but instead due to behavior, which is why they are in solitary confinement in the first place.

“If it’s just based on them solely being eliminated based on their mental illness — yes, they would need to be a part of those (programs),” Welch said. “But if you have those other factors in play — that they are a risk — we have to take into consideration the other inmates as well and their safety.”

Welch said group activities for those in solitary confinement is an idea the jail is working on implementing in the near future.

Although the American Civil Liberties Union of Washington is not seeking litigation against county jails for placing inmates with disabilities and mental illness in solitary confinement, spokesman Doug Honig said the organization opposes the practice.

The organization recently added a new legal staff member who will be taking a hard look at prison conditions across the state.

“He’ll be looking at policies that are detrimental to the health and welfare of the inmates,” Honig said.

The ACLU and Disability Rights Washington are involved in another lawsuit concerning those with mental illnesses and jails. In the lawsuit, Trueblood et al. vs. Washington State Department of Social and Health Services, plaintiffs claimed the state was taking too long to get criminal defendants evaluated and not getting timely restoration services.

“People with mental illnesses shouldn’t be sitting in jail for lengthy amounts of time,” Honig said.

YAKIMA, Wash. -- Sometimes it’s crystal clear, authorities say. A person — often homeless — on the street is talking to themselves. Suddenly, …