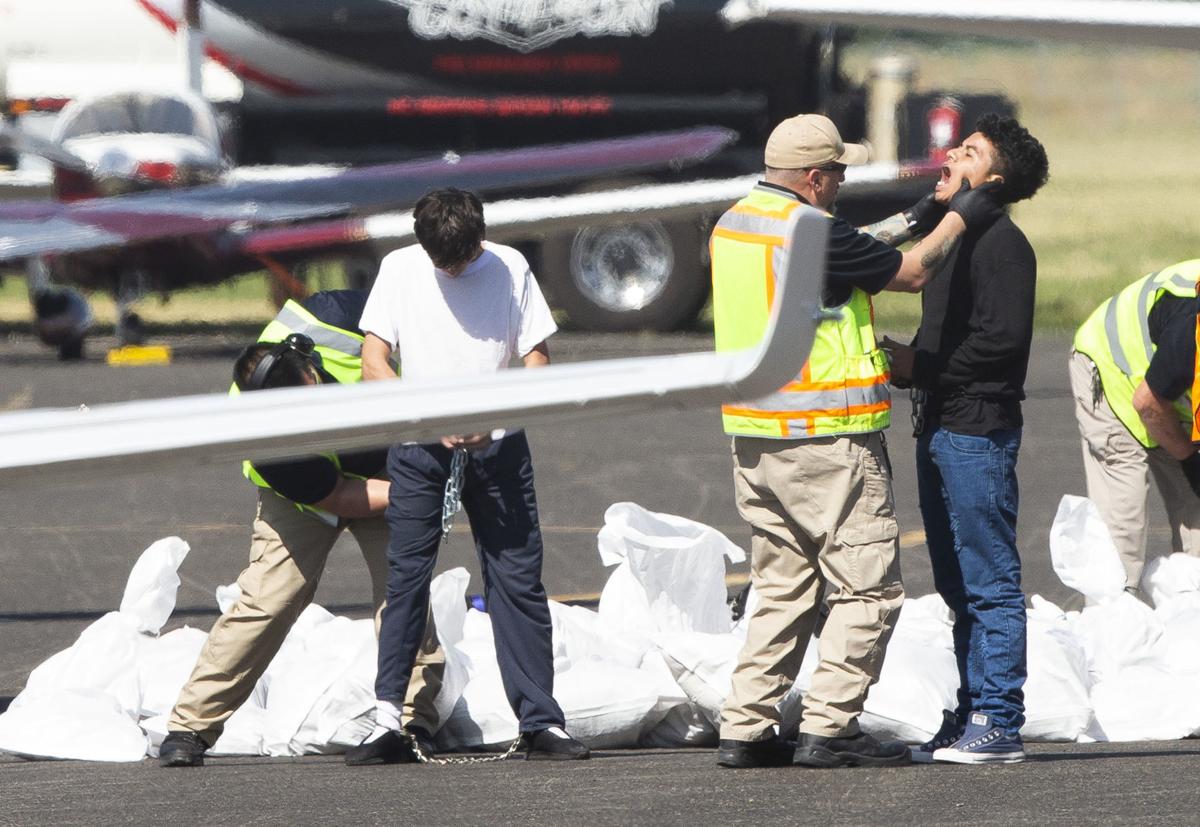 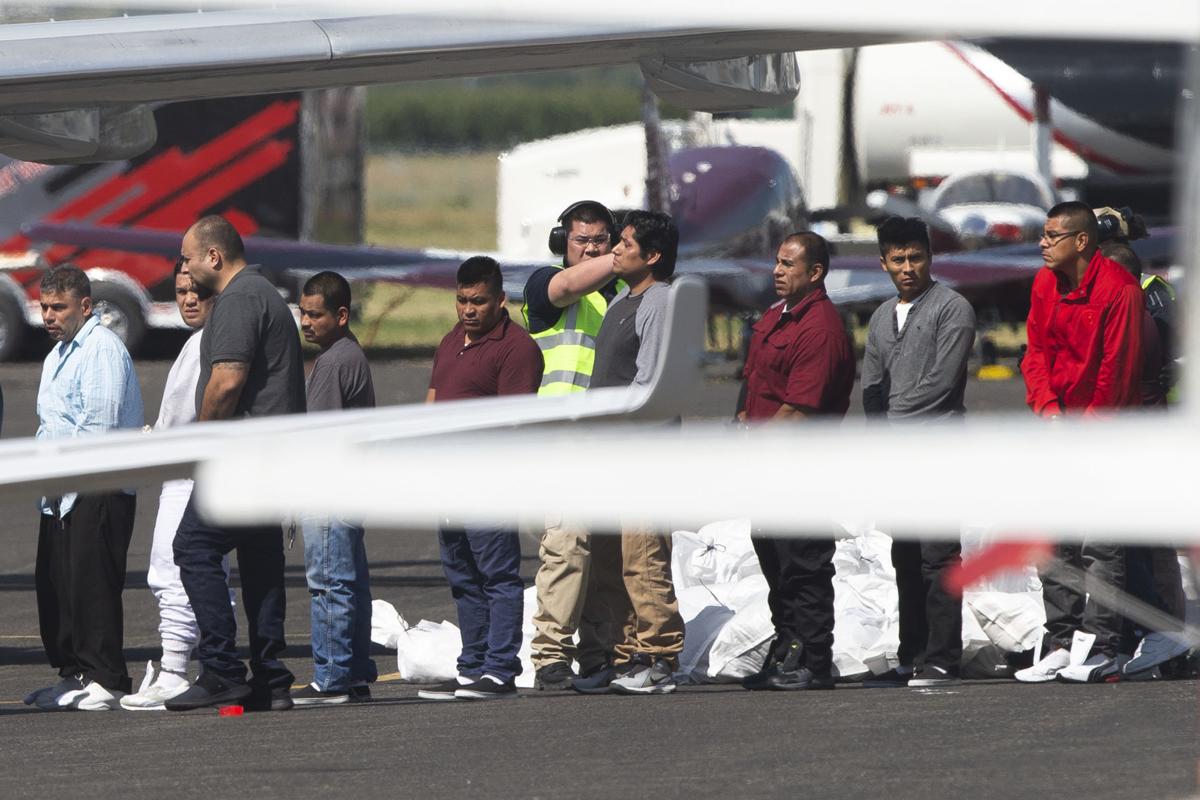 FILE — ICE detainees wait to board a Swift Air flight on Tuesday, Aug. 20, 2019 at McCormick Air Center in Yakima, Wash. 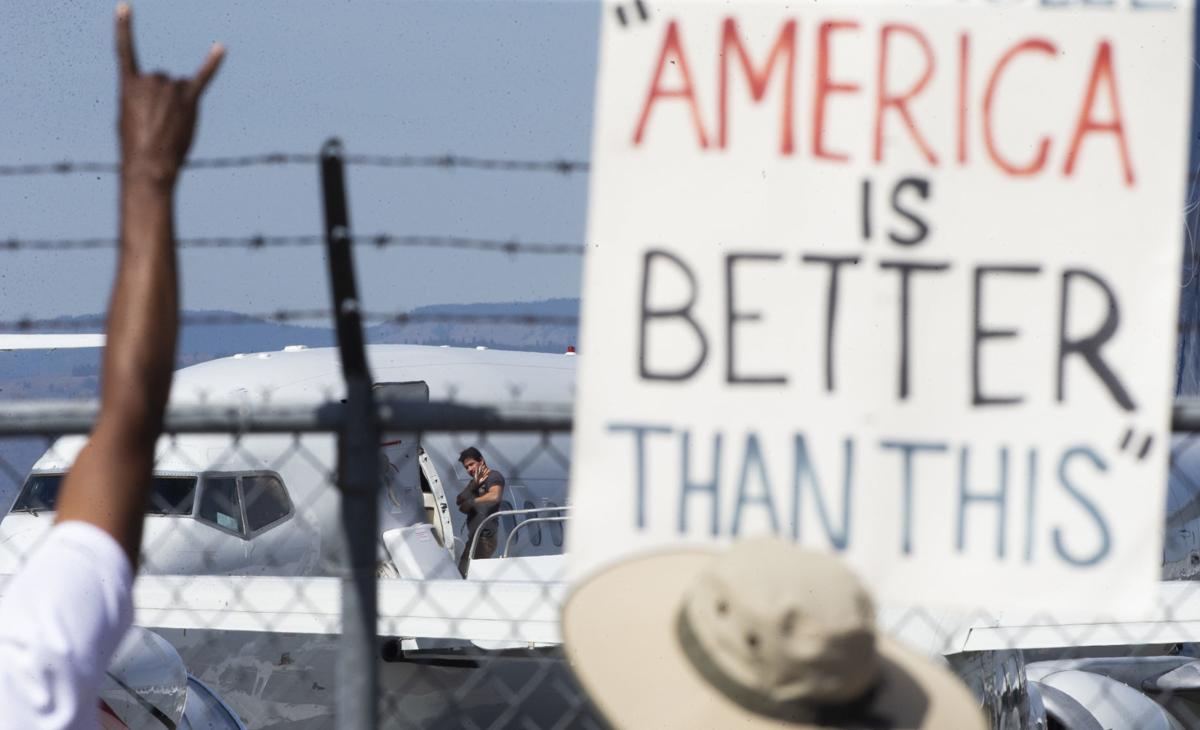 An ICE detainee waves at people chanting and holding signs along the fence while boarding a Swift Air flight on Tuesday in Yakima. 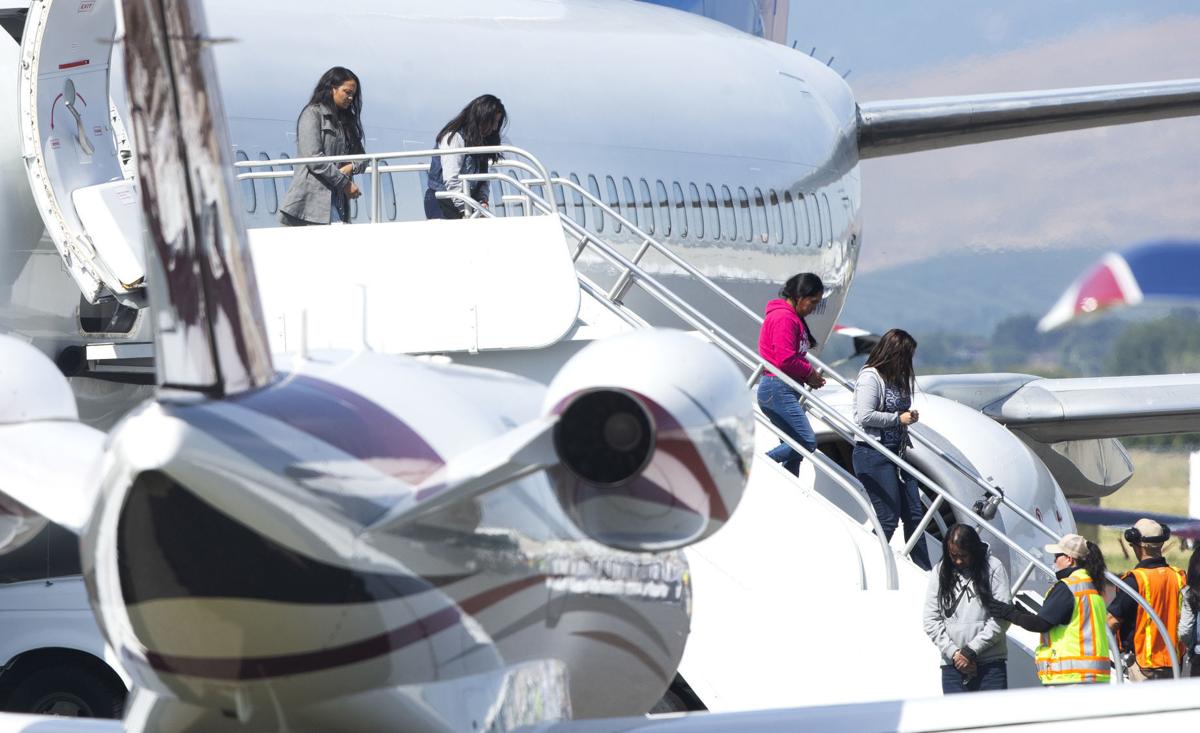 FILE — ICE detainees wait to board a Swift Air flight on Tuesday, Aug. 20, 2019 at McCormick Air Center in Yakima, Wash.

An ICE detainee waves at people chanting and holding signs along the fence while boarding a Swift Air flight on Tuesday in Yakima.

More than 1,880 detainees have been transported through Yakima on flights chartered by U.S. Immigration and Customs Enforcement, according to a new report from the University of Washington Center for Human Rights.

Each of the 23 flights have earned the city of Yakima up to $478 — the latest development in a history of Yakima city and county government financially profiting from agreements with ICE, the report says.

City of Yakima Invoice to ICE for ICE flights

Yakima County has netted more than $1 million since 2015 through an intergovernmental agreement with ICE and the county jail.

Yakima City Manager Cliff Moore has said that the amount of money the city receives from each flight is minimal and that refusing the charter flights would put the city at risk of violating federal obligations tied to more than $19 million of federal grant money the city has received. The City Council voted 4-3 against drafting an executive order prohibiting the flights July 16.

That meeting was heated, with some people in the audience alleging the city was putting profit before people.

The report from the Center for Human Rights also raises those concerns, stating the advent of the regular ICE-chartered flights effectively deepens Yakima’s involvement in the national network of immigration enforcement.

“The city and county now play an increasingly central role to the operations of mass detention and deportation, not only in the Pacific Northwest, but nationwide,” the report notes.

ICE-chartered flights started operating out of Yakima Air Terminal at McAllister Field on May 7, after King County decided to no longer allow the flights from Boeing Field in Seattle.

The number of individuals coming into and out of Yakima on the flights varies between Yakima officials and observers with the Yakima Immigrant Response Network. The city reports 1,881 detainees have passed through Yakima from May 7 through Aug. 12, whereas YIRN has reported 1,907.

Most flights involve a loop originating from Phoenix-Mesa Gateway in Arizona, with stops in Las Vegas, El Paso, Texas, Denver, and Ontario, Calif., before flights return to Phoenix.

Yakima charges Classic Air Charter $200 as a landing fee and $60 for using the city-owned stairs used during boarding. On seven occasions, the city has assessed charges of between $110 and $220 for “operations security.”

A June 2019 invoice included in the UWCHR report shows the city billed $478.22 for a single flight, including the landing fee, use of air stairs and operations security.

City spokesman Randy Beehler said that any money made from the ICE-flights goes back into airport services, including costs for personnel and maintenance.

“We’re not coming out ahead,” he said. “The city understands people’s concerns about perceived financial benefit, but the costs we recover are for services at the airport.”

Beehler added that the Federal Aviation Administration grant money the city receives covers 90 percent of maintenance and improvement costs of the airports, that the city has not received any complaints about increased ICE enforcement activities in the city because of the presence at the airport, and that the City Council has continued to ask its lobbyists in Olympia to engage with federal immigration reform issues.

“The city has done what it can do within its authority about immigration,” he said. “The way that ICE operates is outside the city’s purview, other than continuing to make the case to the congressional delegation that these concerns are real and it’s time they are addressed.”

Yakima County’s history with ICE goes back to an agreement in 1996. The county jail receives $84.51 for each federal detainee per day. The jail held an average of about 130 of those detainees per month since 2017 — the highest number of individuals with a county agreement in Washington state, according to the UWCHR report.

The report also notes that the agreement has made Yakima County more than $1 million since 2015, according to the UWCHR report.

The UWCHR report notes that ICE operations nationwide have been the subject of human rights and constitutional lawsuits, including at the Yakima County jail.

Columbia Legal Services and the Northwest Immigrant Rights Project sued in 2017 and 2018, alleging the county jail had held immigrants for ICE after they were eligible for release.

The settlement required the jail to change its policy. The county paid $181,915 in attorney fees and damages and an additional $155,841 to the private legal firm it hired, expenses borne by Yakima taxpayers, the report notes.

The report notes that the city of Yakima can take steps to ensure its fixed-base operator, McCormick Air, complies with requirements that its practices do not disproportionately impact communities of color or violate human trafficking protections in place by the Victims of Trafficking and Violence Protection Act of 2000.

The report also questions the public safety benefits ICE says its operations bring to communities, citing data from Syracuse University that close to 30 percent of people arrested by ICE in Washington during fiscal year 2018 had never been convicted of any crime and that others had been convicted of traffic violations or civil immigration charges.

“Whatever public safety benefit accrues from the removal of a yet-undisclosed number of truly dangerous individuals — most of whom were likely not apprehended in Yakima to begin with — must be weighed against the growing insecurity experienced by many of those who live and work in Yakima,” the report states.

ICE spokeswoman Tanya Roman said that ICE carries out its operations at domestic airports “humanely and in full compliance with domestic law and U.S. treaty obligations.” Despite state and local efforts to interfere, ICE will continue to enforce U.S. immigration laws, she said.

Roman said that ICE does not conduct “indiscriminate” sweeps during arrests but added that the agency does not exempt anyone in violation of immigration laws — including those who illegally re-entered the country after being removed — from immigration arrests, detention, and possible deportation from the United States.

The Yakima County jail must end its agreement with ICE by December 2021 because of the Keep Washington Working Act, signed into law by Gov. Jay Inslee in May, according to the report.

The act doesn’t impact ICE’s contract with the Northwest Detention Center in Tacoma and the Geo Group, which includes “armed transport services” that frequently route through Yakima. The contract became public record following a lawsuit filed against the detention center by the state Attorney General’s Office regarding the facility’s policy of paying detainees $1 per day to work in the facility.

The University of Washington Center for Human Rights first began research into ICE operations at Boeing Field at the request of the immigrant community in 2018.

City of Yakima will stick with McCormick Air at airport

In the wake of controversy caused when U.S. Immigration and Customs Enforcement moved flights from Boeing Field in Seattle to the Yakima Air T…