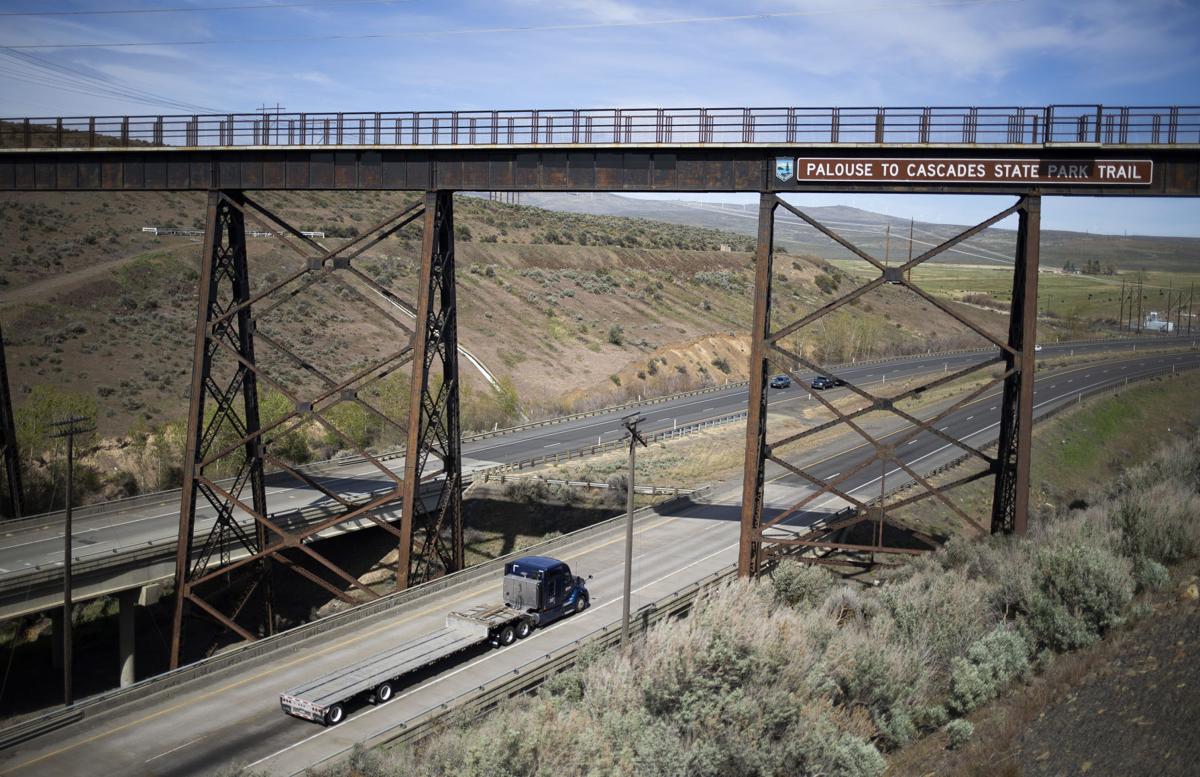 Traffic on Interstate 90 drives under Renslow Trestle Saturday, May 1, 2021 near Kittitas, Wash. The trestle is part of the Palouse to Cascades State Park Trail and recently reopened after maintenance. 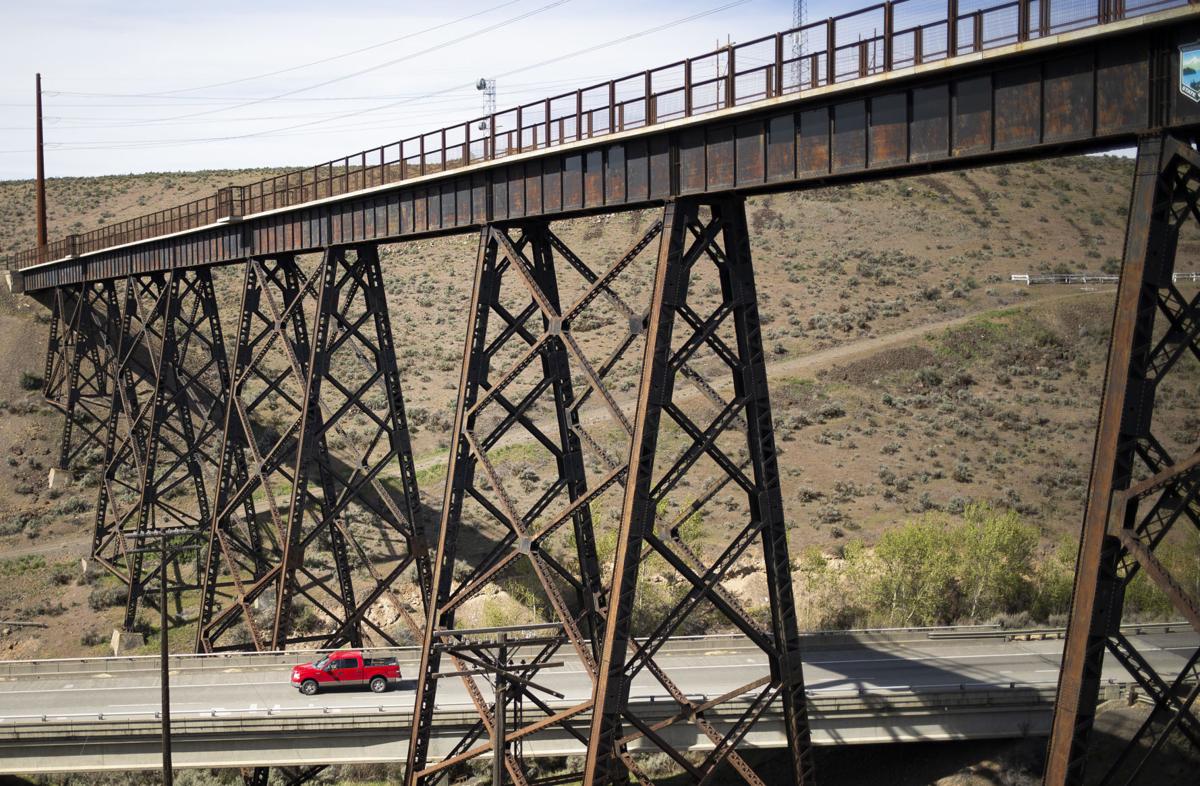 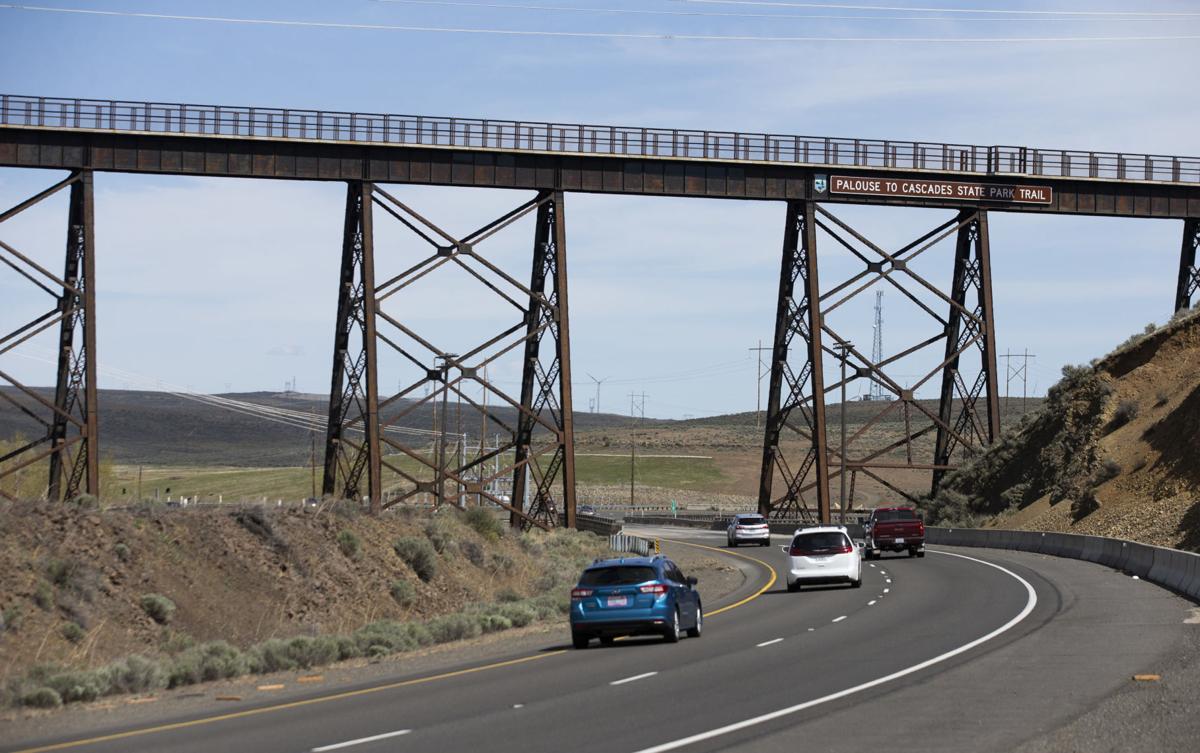 Traffic on Interstate 90 drives under Renslow Trestle Saturday, May 1, 2021 near Kittitas, Wash. The trestle is part of the Palouse to Cascades State Park Trail and recently reopened after maintenance.

Since last week, hikers and riders on the Palouse to Cascades State Park Trail don’t have to get off the path when they cross Interstate 90 in Kittitas County.

Washington State Parks and Recreation Commission, which maintains the trail that follows the old Milwaukee Road railroad, opened the Renslow Trestle, about 6 miles east of Kittitas, to pedestrians, cyclists and horse traffic Thursday. The trestle provides a safer way for trail users to cross the highway, as well as avoid a long detour, state officials say.

State Parks spokeswoman Toni Droscher said this is the first time the trestle has been opened to trail traffic since the rail line was decommissioned in the 1970s.

Originally known as the Iron Horse State Park-John Wayne Trail, the 285 mile-trail follows the Chicago, Milwaukee and St. Paul Railway’s old line through Washington state. The Milwaukee Road, as the line was called, operated from 1909 through 1977, when it dropped two-thirds of its trackage when it went bankrupt, later merging with the Soo Line.

The railroad in Washington was unique, as 216 miles of it used electric trains, which were better suited for climbing mountain grades.

In 1983, the state Department of Natural Resources acquired part of the railroad’s right-of-way, which was transferred to the state parks system in 2006, along with all of the tunnels and trestles. It was recently renamed the Palouse to Cascades State Park Trail to better reflect its role as a cross-state trail.

Hikers, cyclists and horseback riders seeking to follow the trail through Kittitas County ran into a roadblock with Interstate 90. While the trestle carried trains across easily, it was not designed for people to navigate safely.

Instead, hikers, equestrians and cyclists had to take a 3.4-mile detour on Prater and Boylston roads, which Droscher said had poor visibility and no shoulders.

In May 2019, the state began design work to convert the trestle into a pedestrian/bicycle bridge, with construction on the concrete deck and railings in July. The project, which cost about $800,000, was funded with a grant from the Recreation and Conservation Office’s Washington Wildlife and Recreation program, Droscher said.