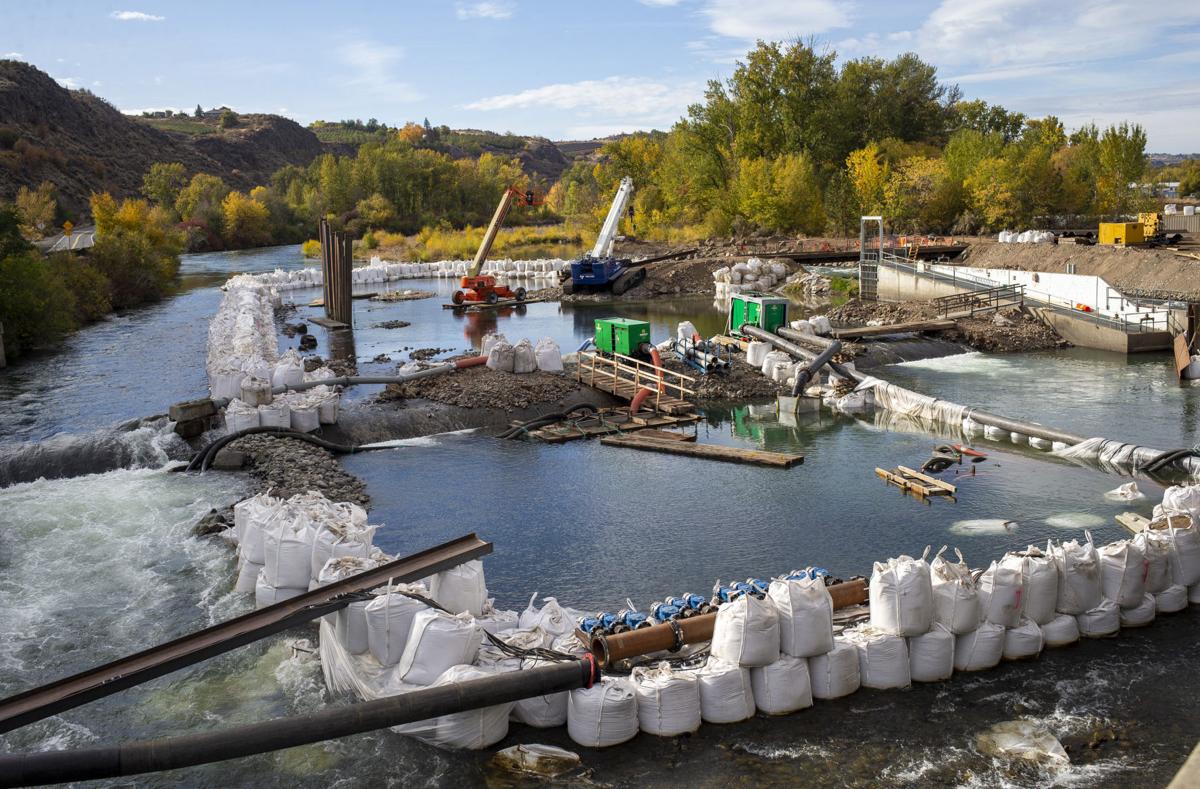 Part of the Nelson Dam is seen surrounded by sandbags to create a work area as the Naches River flows around it Friday, Oct. 15, 2021, in Yakima, Wash. Removal of the dam is scheduled to begin Monday. 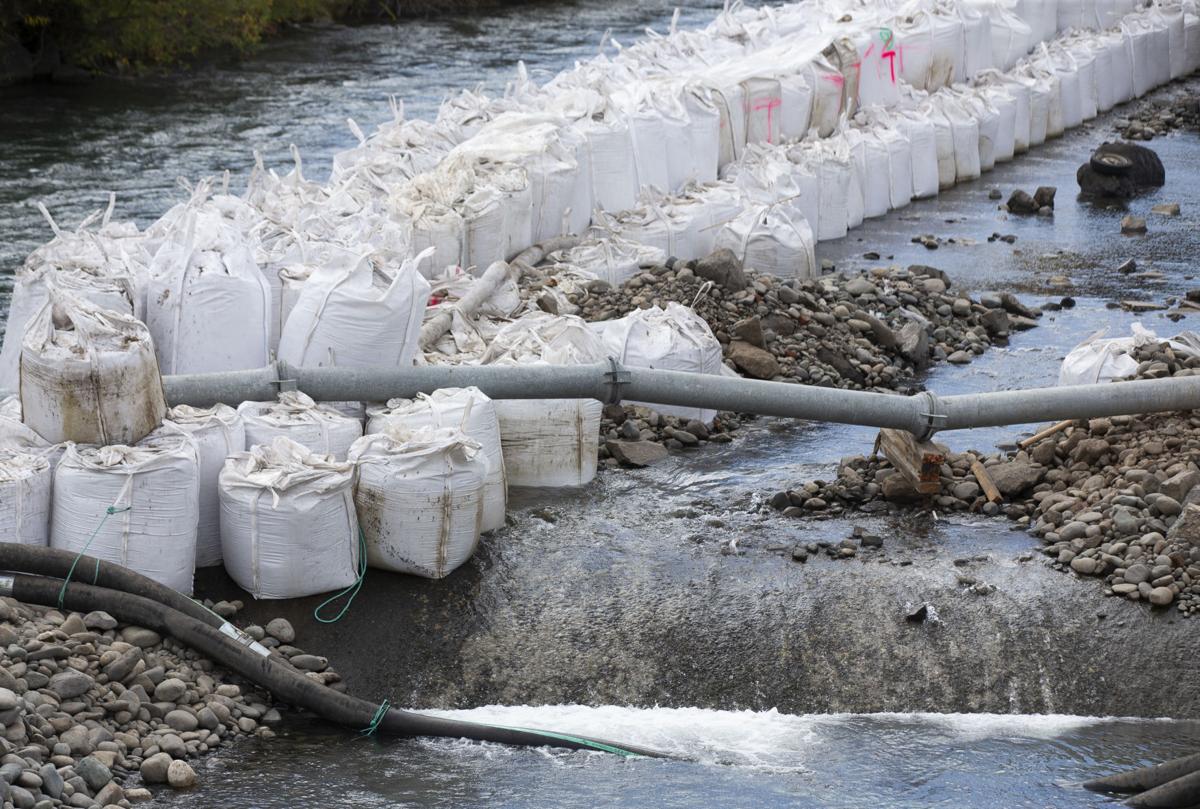 Sandbags block off a work area where the Naches River flows over the Nelson Dam on Friday, Oct. 15, 2021 in Yakima, Wash. Work to remove the dam will begin Monday. 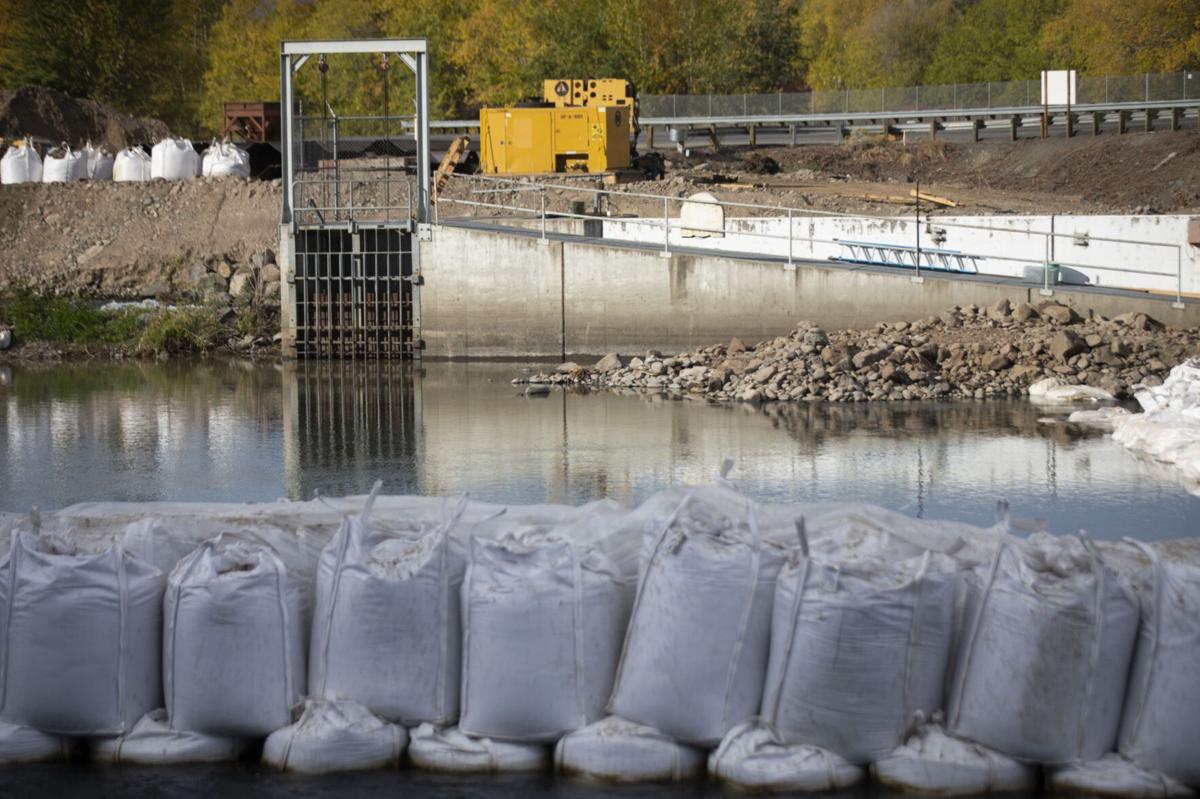 A fish ladder sits in a work area blocked off by sandbags at the Nelson Dam Friday, Oct. 15, 2021, in Yakima, Wash. The fish ladder will be removed along with the dam starting Monday.

Part of the Nelson Dam is seen surrounded by sandbags to create a work area as the Naches River flows around it Friday, Oct. 15, 2021, in Yakima, Wash. Removal of the dam is scheduled to begin Monday.

A fish ladder sits in a work area blocked off by sandbags at the Nelson Dam Friday, Oct. 15, 2021, in Yakima, Wash. The fish ladder will be removed along with the dam starting Monday.

Hundreds of sandbags surround a strangely calm pool of water in the Naches River next to U.S. Highway 12, revealing the concrete of the problematic Nelson Dam.

The city of Yakima will begin taking out the dam Monday, following nearly three months of preparation and several years of planning. City of Yakima Water and Irrigation Manager David Brown said the $18.1 million project just north of town is going smoothly so far, with only some small delays.

“They’re a little behind depending on how you look at the schedule,” Brown said. “I think they’re going to get done fine.”

Contractors Northbank Civil and Marine expect to complete the project — $4 million more than initially anticipated due to rising costs caused by the COVID-19 pandemic — by April 2023, but that will include some required breaks. Their contract with the city stipulates they must be out of the water from Feb. 28 to July 16 to avoid disrupting fish, and fish screens can’t be taken out from April 1 to Oct. 15 to keep water available for irrigation.

Once the dam is removed and replaced with a roughened channel, boaters and all species of fish should be able to move freely along the river for the first time in decades. Brown said that to rescue fish caught up in construction this year, volunteers from Yakama Nation Fisheries, the Washington Department of Fish and Wildlife, HDR Engineering and U.S. Fish and Wildlife came out to help them at no cost.

After taking out the bridge abutment, contractors dug a new bypass channel on the north side of the dam to help move the river and allow water to rush through. Pumps were set up to force out all the water when the dam removal process begins, in order to keep machines from stirring up water and muddying up the river.

Brown said the county denied the contractors’ request to close Powerhouse Road, which already has a small section shut off to traffic for a sewer project closer to Fred Meyer. Crews mostly worked through wildfire smoke, which wasn’t as bad in the area, and they’re dealing with some delivery delays that have become typical for virtually all projects during the pandemic.

The city served as the primary source of funding with more than $7 million, and another $4.5 million came from Floodplains by Design, a grant program through the state Department of Ecology. The state’s Brian Abbott Fish Barrier Removal Board contributed more than $4 million, and other sources of funding for the project included Yakima County, State Community Facility, Rivers Legacy Fund and the Bureau of Reclamation.

The dam was built in the 1920s to divert irrigation water for Yakima and the Naches-Cowiche Irrigation Association. The original design did not allow for any fish passage.

In addition to improving fish passage, the project will help habitat, improve water supply reliability and increase stream conveyance to decrease flooding risks for nearby landowners. Over the years, the dam has held back tons of sediment and silt, raising the river bed and contributing to flooding, according to the city.

The project is expected to improve fishing and open up a significant section of the Naches River for boating and other recreation.

The city’s long-awaited Nelson Dam project should improve fishing and open up a significant section of the Naches River for recreation near Yakima.