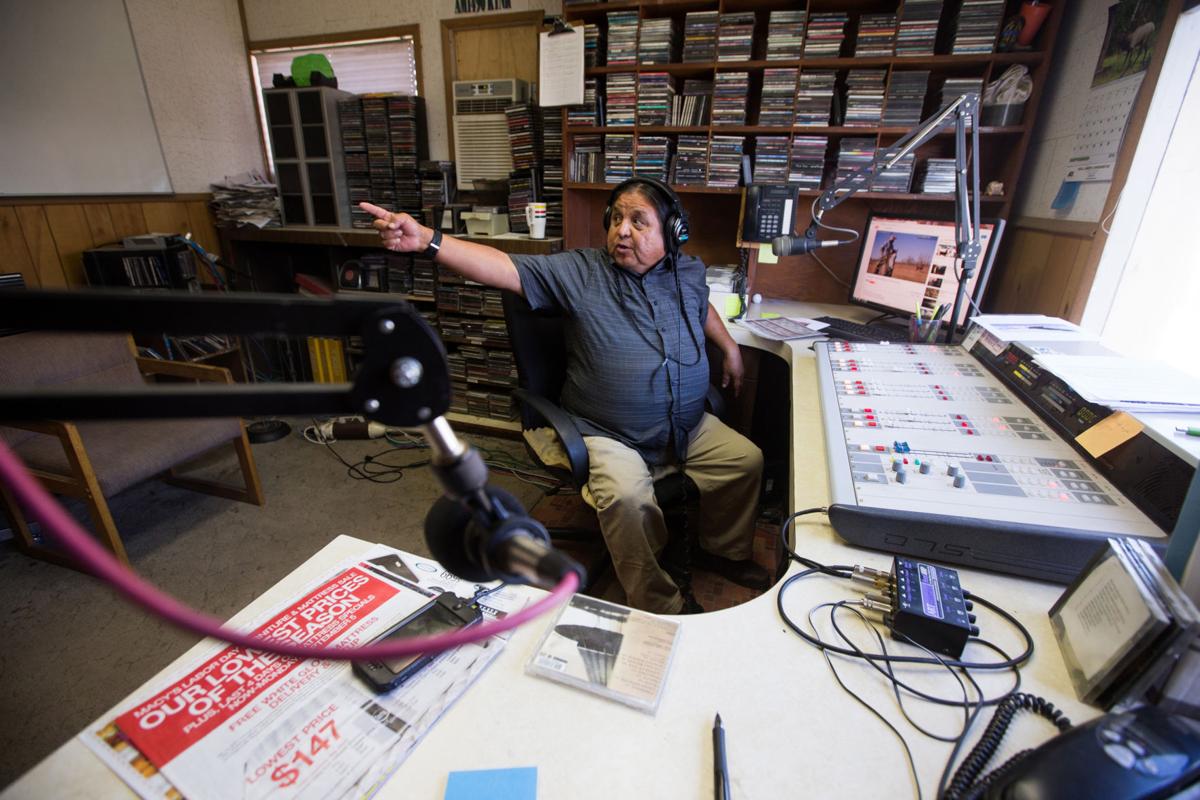 Roy Dick gestures for the studio door to be closed prior to reading the high school football schedule during his shift at the Confederated Tribes and Bands of the Yakama Nation’s radio station, KYNR-AM, in Toppenish, Wash., on Friday, Sept. 2, 2016. (SHAWN GUST, Yakima Herald-Republic file) 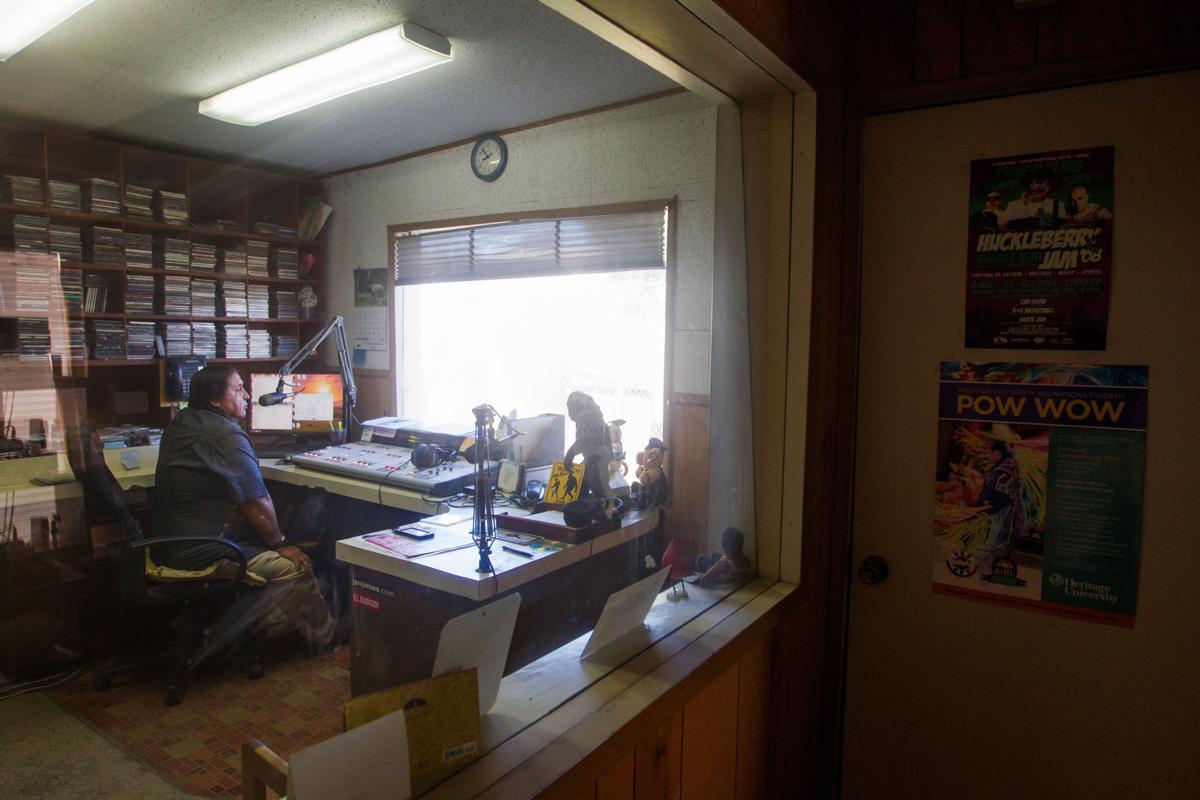 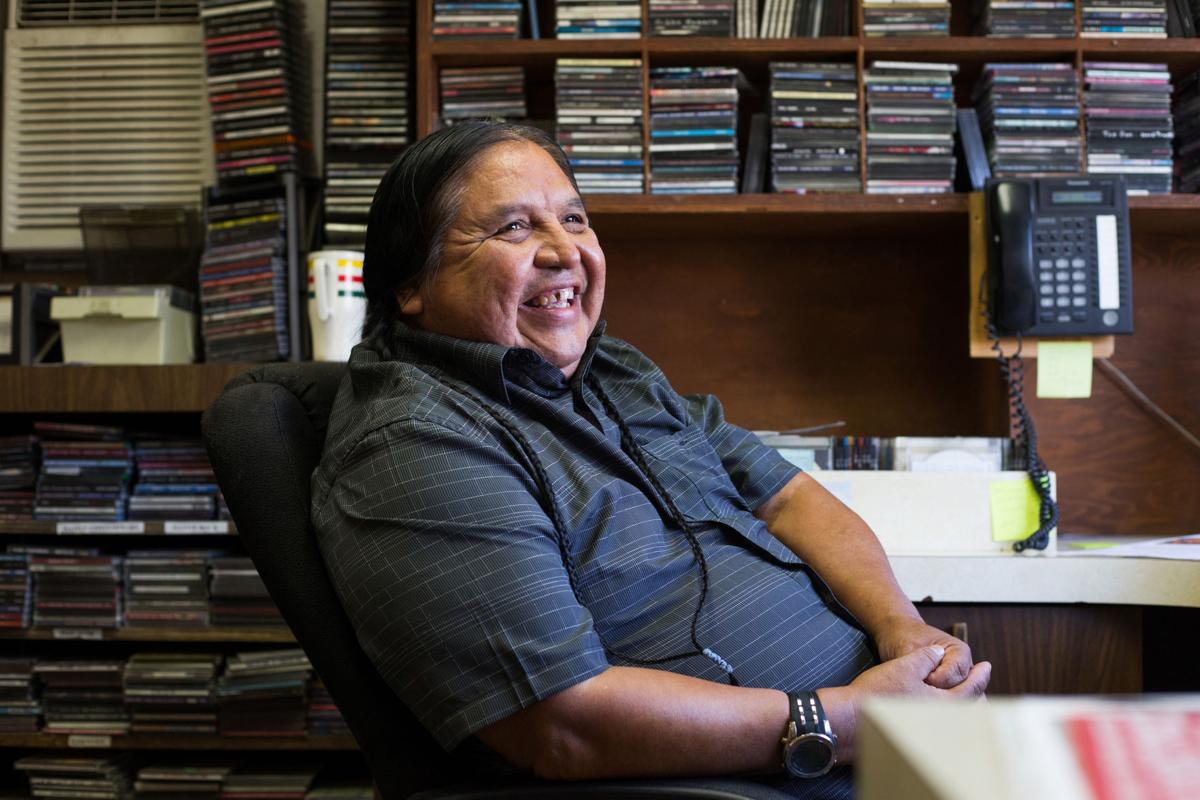 Roy Dick, who began working at KYNR-AM since 2000 as a volunteer, becoming a paid staffer in 2006, is photographed at the station in Toppenish, Wash. on Friday, Sept. 2, 2016. (SHAWN GUST/Yakima Herald-Republic) 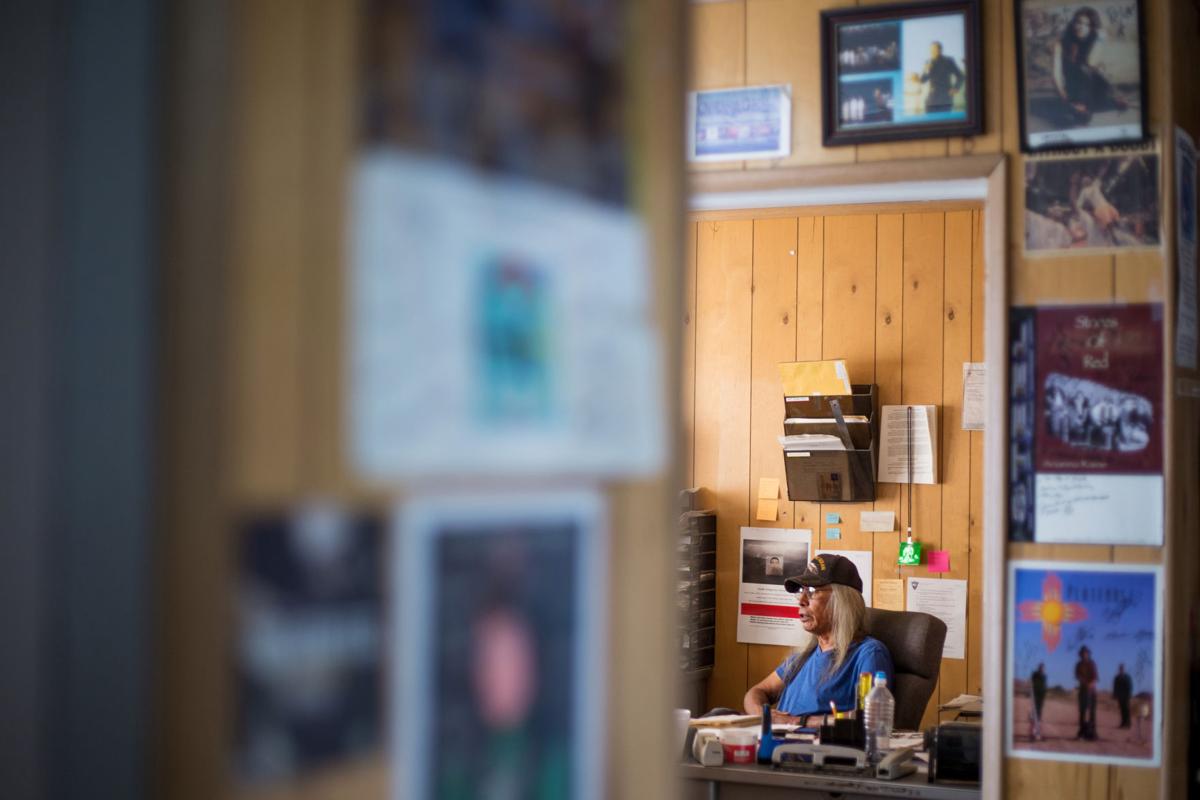 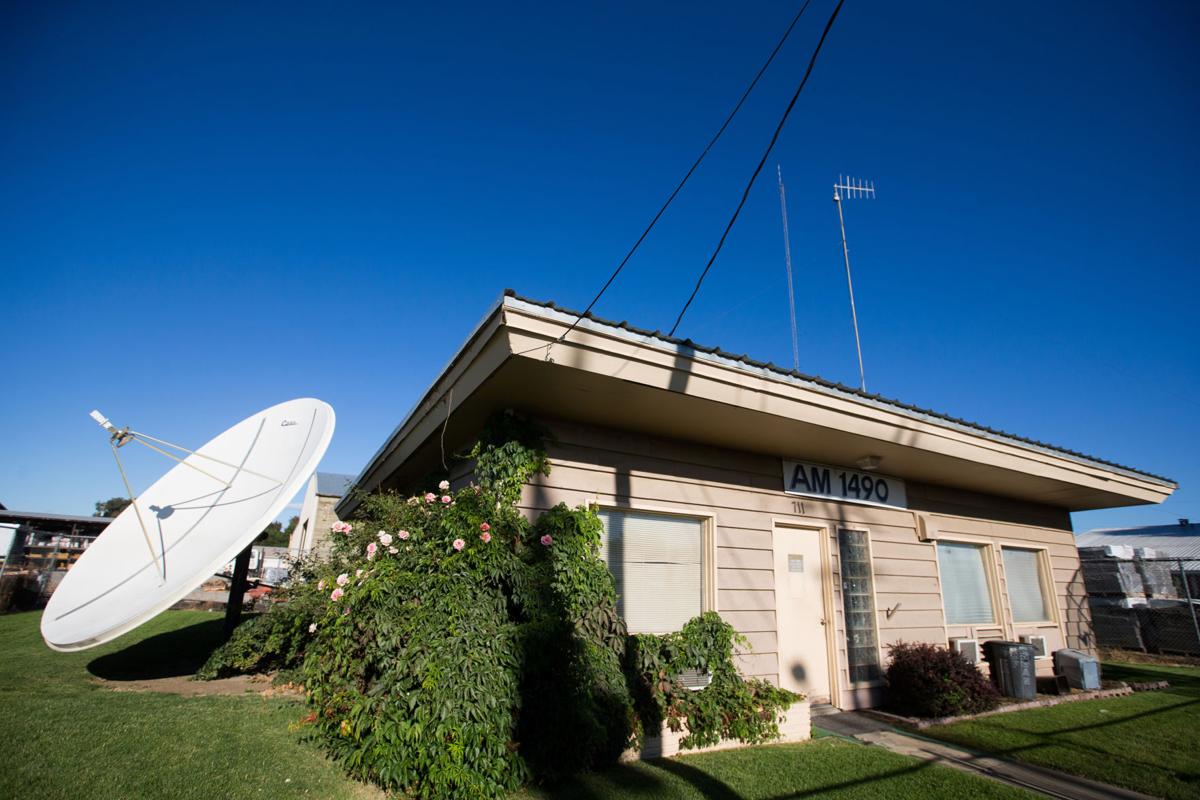 Roy Dick gestures for the studio door to be closed prior to reading the high school football schedule during his shift at the Confederated Tribes and Bands of the Yakama Nation’s radio station, KYNR-AM, in Toppenish, Wash., on Friday, Sept. 2, 2016. (SHAWN GUST, Yakima Herald-Republic file)

TOPPENISH, Wash. — They call him the morning man, this familiar radio personality who greets them early every weekday. They know him as Nockawlee, his name in Ichishkíin, the native language of the Yakama Nation.

“Good morning. Getting ready for this morning we call Wednesday. It’s the 31st day of the eighth month. My name is Nockawlee,” Roy Dick said in his clear, easygoing voice, every word in Ichishkíin.

There are no obnoxious laugh tracks or outrageous stunts on KYNR-AM, no foul language or crude banter. He’s alone in the small building for a few hours, occasionally more. But at the same time, he’s not.

As one of the three-person paid staff of the station at 1490 on the dial, Dick works for the Confederated Tribes and Bands of the Yakama Nation, which owns KYNR. As such, he makes official announcements and provides other pertinent information to every enrolled member across the 1.2 million-acre reservation.

But the 1,000-watt KYNR, which is licensed through the FCC as a non-commercial radio station since joining the airwaves in November 2000, is valuable to its entire broadcast area for the many ways it serves all of its listeners.

KYNR airs programming that includes National Native News and Native America Calling, along with other national Native-produced and syndicated broadcasts. It also airs a wide variety of music that includes tribal powwow, Native artists and music ranging from the 1950s to current hits.

Dick, who is a broadcaster, day-to-day manager Ryan Craig and station manager Reggie George also produce and air live coverage of various Yakama tribal and community events. They conduct live broadcasts of tribal, local high school and professional sports activities along with interviews of Native musical artists such as the Blue Flamez.

They continue to get reports from Yakama Nation members who have joined the ever-growing group of Dakota Access pipeline protesters at Standing Rock, North Dakota.

And in speaking Ichishkíin on the air, Dick offers important support in revitalizing and sustaining the Yakama Nation’s traditional language and thus helps ensure the future of its culture.

One of a kind

Dick begins every morning at 6 a.m. with a recording of the National Anthem sung in Ichishkíin. He makes his Ichishkíin greeting of the day at 7, 8 and 9 a.m.

He is working, but he’s also having a conversation. His on-air personality is his own, nothing else. He chuckles softly and pauses a bit between sentences. He muses without complaint if plans fall through, then thinks aloud as he adjusts accordingly.

He sounds like he is — friendly, helpful and supportive, easy to approach.

Two volunteers, John Sodini and Henry Aleck, keep the station’s technology on track and help wherever else they’re needed. Sometimes they drop by just to keep company.

The outside view from the window in KYNR’s control room inside the small structure at 711 King Lane is pretty ordinary. Broadcasters and their guests see the parking lot of Ideal Lumber, which owns the radio station building.

Inside, though, it’s dazzling. Any music lover can appreciate the jaw-dropping range of CDs, all donated, that are carefully stored from floor to ceiling against the other outside wall. Grouped by genre, there’s disco and country/western and powwow, adult contemporary and modern Native singers and dance compilations, classic rock, hip-hop, soul and rhythm and blues, Lady Gaga and Little Richard — pretty much everything but jazz, which his listeners do not like, Dick said. (Though George plays songs by Nez Perce jazz singer Julia Keefe).

Still, “There will always be somebody who calls in for something we don’t have,” Dick noted as he streamed Future Islands’ “Seasons (Waiting On You)” over the air from YouTube. Staffers rely on a massive digital playlist to keep the programming going 24 hours a day, seven days a week, but broadcasters can pop a CD or other source in at any time.

Among the public service announcement programming, KYNR reads anniversary and birthday announcements every weekday at 4:30 p.m. Staff used to run them earlier in the day, but moved it back so kids could hear them after school. Names are listed on a piece of paper attached to a clipboard hanging near the broadcaster’s chair. Among the songs available are one in Ichishkíin, sung by Greg Sutterlict, who teaches the language, and others.

“We’re grateful for this day you were born,” they sing.

“After you do a show a couple times, you get a feel for what everyone wants to hear,” Dick said.

He got into radio through sports and still reads the weekly football and basketball matchups over the air. After eight years in the construction business, which he left because of a back injury, Dick started as a volunteer at the station on Nov. 30, 2000, becoming a paid staffer on June 30, 2006. His experience webcasting games for Granger High School, his alma mater, helped.

“The second station manager, I inquired about high school basketball. He said, ‘If you get a partner.’ I got one. He did play-by-play, I did the stats,” said Dick, 56, who has called basketball games on the radio for 14 years and football games for 12 years.

“I was always a big fan of this station,” added Dick, a former powwow singer. He’s also the spiritual leader of the Satus Longhouse in Granger, following in the footsteps of his father.

George, who took the broadcasting program at Blue Mountain Community College in Pendleton, Ore., has been involved in radio off and since 1974, he said.

“The first time I heard a tribal radio station was in 1965. That was in Arizona,” said George, who’s been station manager since 2002.

Origin of a voice

The Yakama Nation first began considering the possibility of its own radio station in 1978, when the Yakama Nation Cultural Center was built with broadcasting facilities, he said.

“People didn’t pass it at that time; they built it before it was voted on,” George noted.

The option of buying KYNR’s predecessor first came up in 1998. Brought up for discussion by the tribe that year and in 1999, it failed to pass until another vote, George said.

Its signal is limited to the distance its equipment can reach.

“We just about reach White Swan, and you can barely hear us in Mabton,” said Dick, who uses his personal Facebook page to relay information about special guests, interviews, shows and more.

The station doesn’t quite reach Grandview, but “if you park a certain way in Mattawa, you can hear us,” he added. “We’re not digital yet."

KYNR has neither a Facebook page nor a Twitter account, or any other social media presence. But that’s not a big concern. Elders are prominent among its most important audiences, and many don’t do social media or email. And they may not have phones, but they can listen to the radio, thus a crucial way of keeping them informed.

Over the years, the station has added more local news, particularly breaking news, such as a recent power outage at the Cultural Center. During the summer fire season and the winter, listeners rely on the latest from KYNR even more. And if they don’t hear it, they’ll call.

“In the winter they’ll call in, ‘Is school still on?’” Dick said.

Dick is busy every day. “Plus I’m trying to pick up more and more on the language. ... I took it upon myself to start implementing the language.”

His passion for promoting Ichishkíin reflects an important role of Native radio stations, said Peggy Berryhill, general manager and program host of KGUA 83.8 FM in Gualala, Calif. and co-founder of the Native Media Resource Center there.

Many Native radio stations “are very involved in ... ways to use their language on the air,” Berryhill said.

It’s important to hear Ichishkíin and take part in it every day, Dick says. That continues outside work, because he’s the same guy on and off the air.

“I try to make myself known to other people and spread good feelings toward everybody,” he said.

The multimedia services program includes the radio station and the Yakama Nation Review newspaper. The newspaper was established by Yakama Tribal Council Resolution in May 1970. The standard broadsheet newspaper is published every two weeks. The radio station is located at 711 King Lane, Toppenish. Phone is 509-865-3900; email is kynr@yakama.com.